A procession event featuring four 30m-long portrait photographs taken by internationally-renowned French contemporary artist JR - and carried by the portrait subjects themselves, including local farmers, orchardists and local Baakandji community members - made its way through the dry Menindee Lakes district in regional New South Wales yesterday to highlight the ecological decline of the Darling / Baaka River. 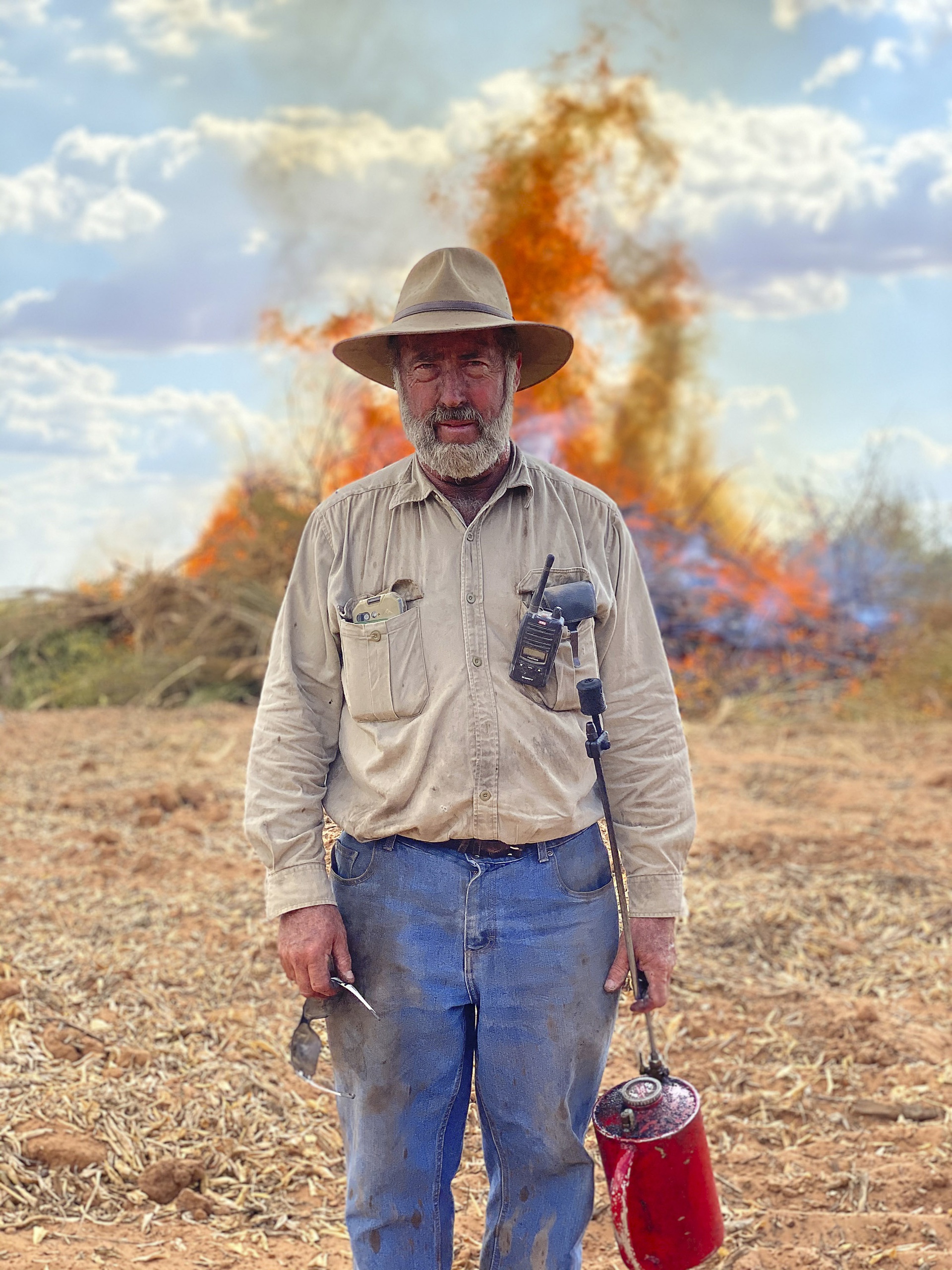 A procession event featuring four 30m-long portrait photographs taken by internationally-renowned French contemporary artist JR - and carried by the portrait subjects themselves, including local farmers, orchardists and local Baakandji community members - made its way through the dry Menindee Lakes district in regional New South Wales yesterday to highlight the ecological decline of the Darling / Baaka River.

The procession was conceived by JR as part of his multifaceted, world-exclusive project for the NGV Triennial, Homily to Country, which draws into focus the complex issues of the river system as a consequence of intensive irrigation, climate change and drought.

Commencing at Lake Cawndilla, the procession honoured the personal stories and experiences of the four portrait subjects, including senior Baakandji Elder and respected spokesperson on the Darling / Baaka River, Badger Bates; orchardists Rachel Strachan and Alan Whyte, who have each been forced to remove their family’s once highly-productive commercial orchards due to lack of irrigation flows; and Wayne Smith, a sixth-generation farmer whose family have lived and worked along the river since the early 1890s.

The portraits were captured by JR during a visit to the area in February 2020 and are intended to draw attention to the plight of individuals affected by the Darling / Baaka River’s decline. By incorporating JR’s large-scale photographs into the environment – a recurring visual motif in the artist’s practice – the procession symbolises the ways in which their stories are inextricable from the ecosystem itself.

Commissioned by the National Gallery of Victoria especially for the NGV Triennial, Homily to Country comprises three elements; an open-air chapel in the NGV garden on display now at NGV Triennial which is inlayed with stained-glass windows based on photographic portraits of Strachan, Whyte, Smith and Bates; the live procession in the dry bed of Lake Cawndilla; and an accompanying film, which will include footage of the community procession.

Tony Ellwood AM, Director, NGV, said: ‘Through this ambitious project, JR explores one of the most significant ecological issues facing Australia today. The procession in the Menindee Lakes district as part of JR’s thought-provoking Homily to Country work in the NGV Triennial, highlights important local voices and gives global attention to the environmental concerns of the Murray-Darling River.’

JR said: ‘I started this project in Italy, very far from Australia, yet farmers have similar issues: protect their environment and live decently from their work. Like many people this past year who were not able to participate in important life moments, I will follow the procession remotely but will surely feel the presence of all the people gathered.’

The Darling / Baaka River is the major tributary to the Murray-Darling River system – the largest system on the Australian continent. The river's ecological decline has had a widely reported impact on the broader agriculture and natural ecosystems dependent on this network of waterways, including those in NSW, Victoria and South Australia.

Some community members in the region, including the portrait subjects in JR’s work, are calling for a re-evaluation of river policy and more sustainable irrigation practices, advocating for a new river management system based on ecological flows and Indigenous land management practices as a new benchmark to improve the health of the river.

Badger Bates said: ‘Baaka is the name of our beautiful river, and it is who Baakandji people are, people of the river. Baakandji never left our land, we are still here, we love our land and it loves us. We have stories that explain its creation and how everything works, so we know how to look after it.’

The Australian project is an extension of JR’s ongoing interest in the plight of farmers globally. Omelia Contadina, 2020, a film by JR and director Alice Rohrwacher, also on display as part of the NGV Triennial, illuminates the loss of farming traditions and access to land as a consequence of intensive industrial-scale agricultural practices in parts of Italy.

In 2011 JR received the TED Prize, after which he created Inside Out, an international participatory art project that invites people worldwide to paste their own picture – as of June 2020, over 420,000 people from more than 140 countries have participated in this project. His recent work includes a large-scale pasting in a maximum security prison in California; a TIME Magazine cover about Guns in America; an Oscar-nominated feature documentary co-directed with French New Wave legend Agnès Varda; giant scaffolding installations at the 2016 Rio Olympics; and an installation at the US-Mexico border fence. JR was also named one of TIME Magazine’s 100 Most Influential People in 2018.

The NGV Triennial is a large-scale exhibition of international contemporary art, design and architecture, featuring 86 projects by more than 100 artists, designers and collectives from more than 30 countries. Comprising an ambitious and diverse selection of works at the vanguard of contemporary practice, the exhibition offers a visually arresting and thought-provoking view of the world at this unique moment. Free and exclusive to Melbourne, this is the second instalment of the NGV Triennial, which is held every three years. The inaugural exhibition, held in 2017, remains the NGV’s most attended exhibition to date, with 1.23 million visitors.

The NGV, the largest art book publisher in the southern hemisphere, has produced a large-scale and highly illustrated publication to accompany the exhibition, which features over 50 authors from around the globe presenting discourses from a variety of perspectives, including those of academics, journalists, literary figures, social commentators, artists and curators. The NGV Triennial publication comprises five removeable paperback books housed within the single magnetic case. Four volumes will speak to a different theme explored in Triennial, while the fifth volume will act as a dossier on NGV Triennial and will include biographies of artists and authors, and project descriptions.