Season Will Also Include First U.S. Solo Exhibition of Fernanda Laguna and a New Commission by Kandis Williams 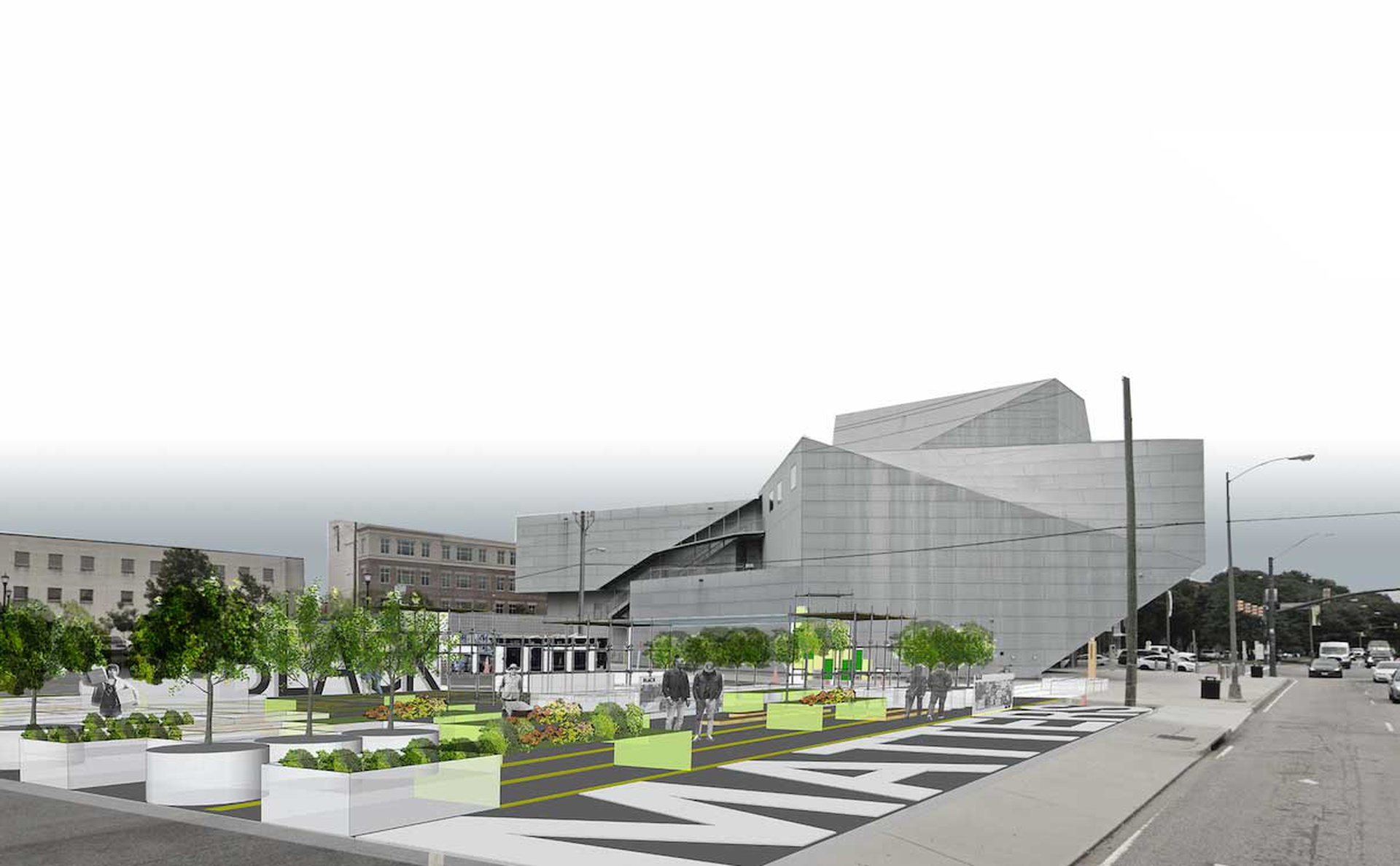 Season Will Also Include First U.S. Solo Exhibition of Fernanda Laguna and a New Commission by Kandis Williams

The Institute for Contemporary Art at Virginia Commonwealth University (ICA at VCU) announced today that it will reopen to the public on July 17 with new health and safety protocols in place, and that it has extended the run of both Provocations: Guadalupe Maravilla and The Otolith Group: Xenogenesis through August 9. The ICA also announced its fall slate of exhibitions, beginning with Commonwealth, the exhibition component of a multi-institutional, bilingual collaboration between the ICA, Philadelphia Contemporary (Philadelphia, PA) and Beta-Local (San Juan, PR), exploring the complex history and legacy of “commonwealth” through new artist commissions, a hybrid print/digital publication, a Philadelphia-based neighborhood regranting program, and a series of online programs. The season also includes Fernanda Laguna: As Everybody (Como todo el mundo), the Argentinian artist, writer and activist’s first solo exhibition in the U.S., and Kandis Williams: A Field, a site-responsive multimedia commission by the Los Angeles-based artist.

In response to pivotal events that have shaped recent months, including the COVID-19 pandemic and the Black Lives Matter movement, the ICA has been adapting its program and exhibition strategy to accommodate the need for sustained online programming options and to engage in dialogue with current issues. One example of this is the transformation of Commonwealth by the three participating institutions into a hybrid digital/in-person experience; many of the commissioned artists have also adapted their new works to be responsive to the current moment. Another is the launch of Public Study, a new series of collaborative, public programs designed to open up the various processes behind the ICA’s exhibitions, programming and publications — from research and production, to learning and dialogue. Rooted in the ICA’s existing methodologies, Public Study will be integrated into the ICA’s long-term programming strategy and continue to offer its audiences a critical space to connect and exchange ideas.

“The ICA is a young contemporary arts institution born into an era of social and political tumult. This fall, in the midst of a global pandemic, at the height of the U.S. elections, and as people take to the streets to challenge systemic racism, we have an opportunity and duty to work with artists to probe many of the most pressing issues to our community and our country,” said Dominic Asmall Willsdon, Executive Director of the ICA at VCU. “Public Study, in particular, will allow us to build on our longstanding practice of putting dialogue and mutual learning at the heart of our work. Now more than ever, we hope that, through art and research, we can collaboratively create a space for new perspectives, productive conversations and intersectional dialogues.”

Public Study offers local, national and international audiences additional opportunities to connect with the art, artists and ideas featured in its exhibitions and programs. At a time when social distancing has created a critical need for human connection and exacerbated the isolation of the research process, Public Study’s current slate of at-home programs allows the ICA to continue to connect with its audiences and make the extensive research and study behind its exhibitions public and participatory. Public Study programs connected to this fall’s exhibitions include “Public Annotations,” an exercise that invites people to read, edit and respond to open access PDFs of key texts related to Kandis Williams: A Field, bringing multiple voices and perspectives into the development of ICA exhibitions and related scholarship; “High on the Tide (Mareadas en la Marea),” a series of live, international Zoom discussions with the goal of building a tool-kit for feminist and gender activism; a Zoom discussion cohosted by Kandis Williams in conversation with communities of women involved in sex/eroticism work, whose expertise has aided in the research and development of Williams’ new ICA-commissioned sculptures; and a series of online programs related to Commonwealth. In July, the ICA will launch “1-844-NOT-Z00M,” an art hotline that invites audience members to dial in to hear original poetry, songs, or words from artists.

The diverse slate of presentations this fall showcases a wide spectrum of contemporary artistic voices from Virginia, Argentina, California, Puerto Rico and beyond, reflecting the institution’s focus on both local and global artists and experiences. One focal point of the season is an exploration of feminism and intersectionality, with Fernanda Laguna: As Everybody and Kandis Williams: A Field both part of the Feminist Art Coalition, a nationwide collaboration between arts institutions that aim to make public their commitment to social justice and structural change through feminist-centric exhibitions and programming.

Commonwealth is the outgrowth of a multiyear partnership between three dynamic, socially engaged contemporary arts organizations: the Institute for Contemporary Art at Virginia Commonwealth University (ICA at VCU) in Richmond, Virginia; Philadelphia Contemporary in Philadelphia, Pennsylvania; and Beta-Local in San Juan, Puerto Rico. The project explores the historical concept of “commonwealth” and its legacy in each of the three locations. It asks whether it’s possible to unleash the collective power embedded in that term while recognizing its connection to exploitation and colonialism. The question of how people understand common wealth, and the tension between individual choice and collective wellbeing, has become all the more relevant in 2020, a year that began with earthquakes in Puerto Rico and has continued with the historic impacts of the COVID-19 pandemic and the Black Lives Matter movement.

Using the tools of culture — from critical conversation to writing, image-making, performance and even gardening — Commonwealth offers paths to understanding both the unequal structures that shape our lived realities and ways that people might come together to make the world more equitable.

Originally designed to be presented as an exhibition in all three cities, the initiative has since been reconceived to account for limited travel and social distancing restrictions and to maximize digital access. The ICA will now present the sole exhibition of the project, with Beta-Local leading the development of a hybrid print and digital publication, and Philadelphia Contemporary launching grant-funded community partnerships and a billboard by artist Firelei Baez. The three institutions have also worked with the project’s artists to adapt their new works to be responsive to the current moment and to create a hybrid digital/in-person experience. The indoor/outdoor exhibition component of the project, opening at the ICA in September, will feature all of the new co-commissioned work by artists Firelei Báez, Carolina Caycedo, Duron Chavis, Alicia Díaz, Sharon Hayes, Tanya Lukin Linklater, Nelson Rivera, Monica Rodriguez, and The Conciliation Project (TCP). In addition, the exhibition includes an existing sculpture that Lukin Linklater created with Tiffany Shaw-Collinge. Working across different media, geographies, and ideas, each of the selected artists is creating new work, which will also be presented in different iterations online and in text, that delves into the notion of the commonwealth—its history and many afterlives, as well as the term's conceptual possibilities and inherent limitations. Select works include: a “resiliency garden” outside the ICA conceived by food justice activist Duron Chavis and designed by Quilian Riano of DSGN AGNC; Distressed Debt, an installation by Carolina Caycedo that investigates the privatization of natural resources; a filmed performance by indigenous artist Tanya Lukin Linklater that addresses the legacies of settler colonialism; and a performance by the Richmond-based, anti-racist group The Conciliation Project (TCP) that responds to the current moment of racial justice protests.

The bilingual publication, designed by San Juan-based studio Tiguere Corp, will be released serially over fall 2020 with three issues published both digitally and as limited-run print editions. Inspired in part by the directness and immediacy of newspapers, the publication will highlight both connections and differences across the three cities by mixing hyper-local, current content with broader historical perspectives and artworks. In addition to the publication, the partners will host online Commonwealth-related programming this fall.

In October, the ICA will present Fernanda Laguna: As Everybody (Como todo el mundo), a survey of work by Argentinian multimedia artist Fernanda Laguna (b. Buenos Aires, Argentina, 1972) investigating her aesthetic (which draws on Surrealist legacies) and feminist activism. As Everybody is Laguna’s first solo exhibition in the U.S.

Curated by ICA Executive Director Dominic Asmall Willsdon, As Everybody will weave together various facets of Laguna’s practice as a visual artist working primarily in painting and drawing, a curator of alternative art spaces, a novelist and poet, and an activist and a community worker, including:

As part of Public Study, the ICA at VCU will facilitate dialogue and exchange between women’s rights activists across the Americas. “High on the Tide (Mareadas en la Marea),” inspired by the installation of the same name, will take the form of live Zoom discussions and published resources beginning in August. Topics will include: how to organize a feminist strike, the parody men’s magazine Nacho, and the connections between Ni Una Menos (Not One Woman Less) and international activism.

Laguna, celebrated for her co-organization of the now legendary collective literary and art space Belleza y Felicidad (Beauty and Happiness), has work in the collections of the Guggenheim, LACMA, and the Reina Sofía among other museums. Her translated writings include Belleza y Felicidad -- Selected Writings: Fernanda Laguna & Cecilia Pavón (Sand Paper Press, 2015) and, under Laguna’s pseudonym Dalia Rosetti, Dreams and Nightmares (Larb, 2016) and El fuego entre nosotras (Random House, 2020, untranslated) which is about a rebellion by domestic servants in the art world.

Kandis Williams: A Field will feature a new, site-responsive commission by Kandis Williams (b.1985, Baltimore, MD), an artist, educator, writer, and publisher based in Los Angeles, CA. Williams’ work utilizes collage, printmaking, video, and performance to address racist theories and philosophies. With themes like surveillance, cannibalism, and exoticism, Williams upends logics born out of anti-Blackness to counter the consumption and fetishization of Black bodies. Williams’ commission for the ICA will merge for the first time the artist’s work in visual art, publishing (CASSANDRA PRESS), and performance, transforming the gallery into a space for reading images, text, and the body. Lo-fi publishing initiatives, conversations, and exchange of materials will allow for the dissemination of content outside of the gallery.

For Williams, “fields” suggest both fields of research as well as agricultural fields, and the labor associated with these spaces. At the ICA, this exhibition will appear as a botanical garden in ruins. Plant species with racist nomenclature will be transformed by the artist using fetishistic images of Black bodies from popular culture and historical archives. Industrial scaffolds and a greenhouse will serve as structures for new potted plants, vines, and a video. A Field will also speak to labor, specifically the United States’ reliance on convict-leasing for agricultural and other forms of essential labor—one of the ways slavery has been legalized and normalized under the Constitution.

In August 2020, as part of a commitment to opening up the processes behind its exhibitions through Public Study programs, the ICA will present a series of talks and workshops related to Williams’ project. Williams will cohost a public discussion on Zoom with thought leaders and communities of women who are directly involved in sex work and work related to eroticism. Their expertise has been an aid in the research and development of Williams’s new ICA-commissioned sculptures titled “Ho Vines” and “Fetish Flowers.” Additional talks will be dedicated to fields of study and spheres of activism that speak to this exhibition's central thematics. In preparation for the exhibition, the ICA will also launch “Public Annotations,” inviting audiences to lend their voice to the research process through collaborative edits to open-access PDFs. “Public Annotations” will engage with Williams’s practice as a researcher and publisher, expanding her commitment, as CASSANDRA PRESS, to propagating dialogue focused on Black femme scholarship and activism.

Kandis Williams: A Field is curated by ICA Associate Curator Amber Esseiva and is the third iteration of Provocations, an annual commission series that takes its name from architect Steven Holl’s design intention for the ICA’s soaring True Farr Luck Gallery, which he calls “a provocation for artists to engage.”