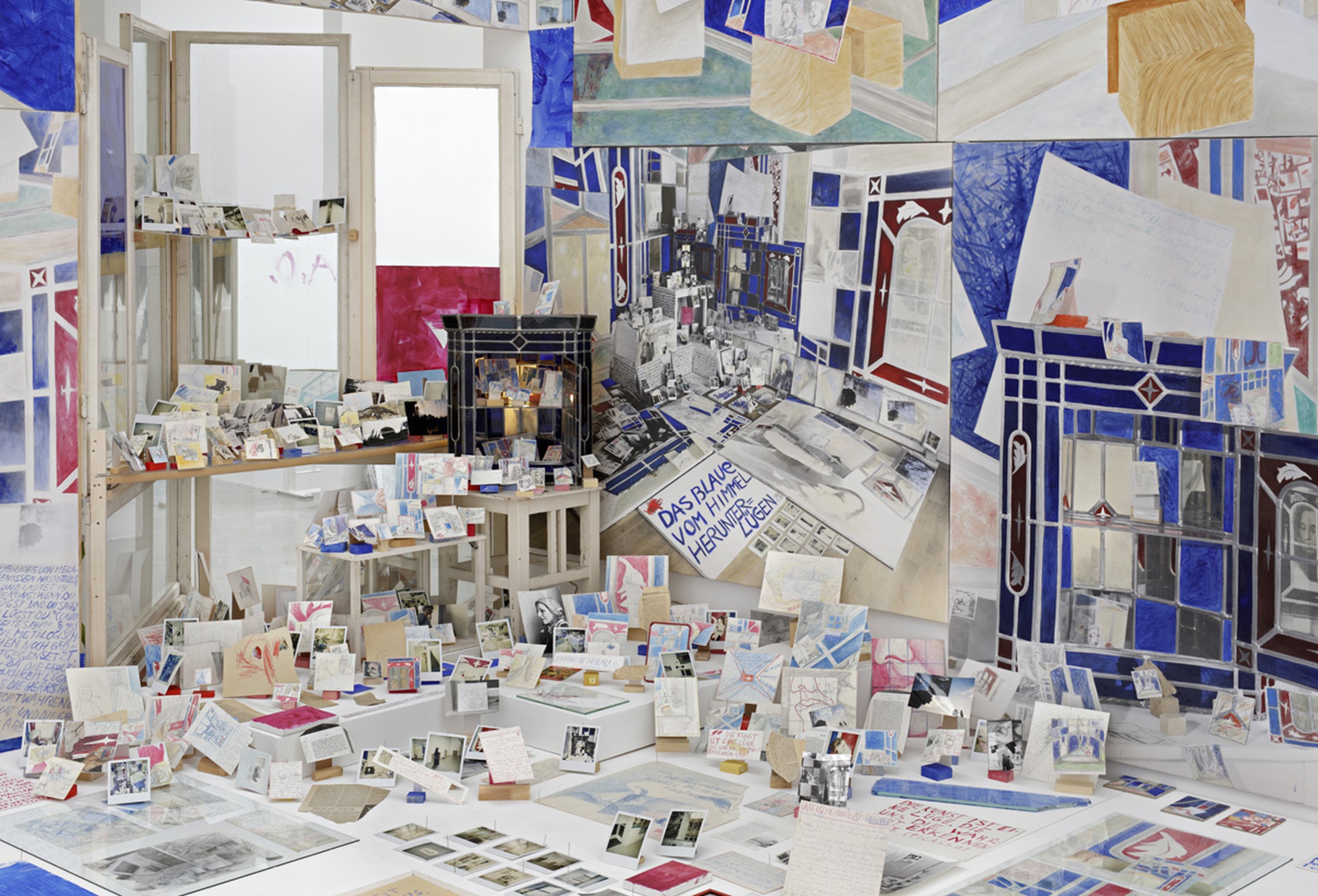 The Institute of Contemporary Art, Miami (ICA Miami) opens the doors to its new permanent home in the Miami Design District on December 1, 2017, with a bold inaugural program that reflects the museum’s commitment to championing new narratives in contemporary art and to providing a platform for the exchange of art and ideas. With more than double the exhibition space in its new permanent home, ICA Miami presents its first thematic survey and most ambitious exhibition to date, bringing together the work of contemporary innovators with that of modern masters. The new building also enables the museum to expand its commitment to mounting monographic presentations that offer new insight on under-recognized artists and deepen scholarship in the field; and to commissioning boundary-pushing works of art through the debut of six new large-scale works, on view throughout the museum and its sculpture garden. A private press viewing of the new museum will be held on Monday, December 4, 2017.

Highlights of the inaugural program include The Everywhere Studio, a thematic survey tracing the impact and influence of the artist’s studio from post-war to the present day. Focused solo exhibitions of work by Edward and Nancy Kienholz, Senga Nengudi, and Hélio Oiticica respectively bring to light significant periods of each artist’s work, providing renewed understandings of their practices and underscoring the museum’s commitment to developing new scholarship in post-war and contemporary art. Robert Gober’s untitled series of photographs (1978 – 2000) and an untitled drain (1993 – 94), newly pledged long-term loans to the museum from Irma and Norman Braman, are on special view, as well as exhibitions of newly commissioned works by Chris Ofili and emerging Miami-based artist Tomm El-Saieh. The museum’s outdoor sculpture garden features a significant sculpture by George Segal, a major loan from Miami-based collector Martin Z. Margulies, alongside large-scale installations and site-specific commissions by Allora & Calzadilla, Abigail DeVille, and Miami-based artist Mark Handforth.

“We are thrilled to unveil ICA Miami’s new permanent home in December and to sustain our commitment to free general admission, inviting the entire community to engage with our dynamic inaugural program,” said Ellen Salpeter, Director of ICA Miami. “We look forward to building on the diverse spectrum of exhibitions and educational programs offered year round—from workshops for teens and youth, to public talks and activities, to seminars for graduate students—that foster cross-cultural dialogue and the exchange of ideas.”

“The inaugural program of the new ICA Miami represents an expansion of the depth and breadth of our programmatic approach,” said Alex Gartenfeld, Deputy Director and Chief Curator. “Thematic surveys such as The Everywhere Studio will explore critical topics in contemporary practice through the work of today’s leading artists as well as their predecessors. These major exhibitions, in addition to solo presentations of rarely exhibited bodies of work like those of Senga Nengudi and Hélio Oiticica, are key examples of ICA Miami’s commitment to bringing fresh perspectives to our understanding of contemporary art, fostering dialogue, and expanding scholarship in the field. The inaugural program also represents the global and local voices represented in ICA Miami’s programs, from renowned Trinidadian artist Chris Ofili, to emerging Miami artist Tomm El-Saieh.”

The museum’s second and third floors are dedicated to a rotating series of special exhibitions that explore current themes in contemporary art through the work of today’s pioneering artists, often presented in dialogue with post-war masters. The Everywhere Studio isthe first exhibition to inaugurate the galleries,on view December 1, 2017 through February 26, 2018.

Encompassing some 100 works in painting, sculpture, video, and installation, The Everywhere Studio brings together over 50 artists from the past five decades to reveal the artist’s studio as a charged site that has both predicted and responded to broader social and economic changes of our time. Through a combination of post-war artists through emerging practitioners—including Pablo Picasso, Yves Klein, Philip Guston, Bruce Nauman, Carolee Schneemann, Dieter Roth, Andy Warhol, Martin Kippenberger, Rosemarie Trockel, Elaine Sturtevant, Anna Oppermann, Joyce Pensato, Andrea Zittel, and Tetsumi Kudo, among others—the exhibition aims to create intergenerational dialogues that enhance understanding of the most innovative artists working today.

From the studio as a site of labor; to one that blurs production, performance, and spectacle; to a concept that defines the artist’s own identity; the exhibition examines the work of artists who, in response to changing socioeconomic influences, represented new modes of working and living that would subsequently spread across society. Newly commissioned works by Neïl Beloufa, Matthew Angelo Harrison, Margaret Honda, and Yuri Pattison, conclude the exhibition with current reflections on our digital age and the impact of technology on society.

The first in an annual rotation of site-specific commissions that animate the museum’s main passageway between the second and third floors, a dramatic two-story installation by Charles Gaines will activate the vertical cantilevers of ICA Miami’s central stairway. Gaines’ practice places him within the legacy of conceptualism, evidenced by works such as his gridded, serial images of trees painted on Plexiglas. The site-specific installation explores the artist’s application of seriality on a massive scale.

The museum’s six adjustable ground-floor galleries feature a combination of long-term and rotating special exhibitions, including commissions and highlights from the permanent collection, as well as presentations that spotlight under-recognized bodies of work by pioneering artists. Exhibitions include:

Serving as the museum’s central gathering space, ICA Miami’s new 15,000-square-foot sculpture garden showcases an annual schedule of major sculptural works by post-war and contemporary artists, including large-scale commissions created for the museum. To inaugurate the sculpture garden, ICA Miami presents three major site-specific commissions, as well as a long-term loan to the collection, including:

About the New Building

Designed by the Spanish firm Aranguren + Gallegos Arquitectos and located in Miami’s Design District, ICA Miami’s new 37,500-square-foot home resonates and reflects the museum’s commitment to the contemporary and to serving its community. With more than double the space for exhibition galleries and a new 15,000-foot sculpture garden, the new building further advances the museum’s mission of providing a dynamic platform for the exchange of art and ideas.

Visitors will approach the museum from the south, encountering a façade of interlocking metal triangles and lighted panels. The northern façade, in contrast, features a curtain wall of windows that bring natural light into the museum’s galleries and allow visitors to take in views of the sculpture garden and the surrounding cityscape. The new ICA Miami creates an integrated and transparent environment in which visitors can encounter and experience the museum’s varied artistic programming. The interior of the new museum includes 20,000 square feet of adjustable gallery spaces across three floors that respond to the diversity of artist installations, exhibitions, and performances that ICA Miami presents, as well as increased space for educational and community programming.

The design and construction of the new building, along with the acquisition of land for the sculpture garden, has been funded entirely by a major capital gift from Irma and Norman Braman. The capital campaign for the new building has been additionally supported by a generous donation of land from Miami Design District Associates. The museum is in currently in the quiet phases of an operational campaign to support and ensure the long-term sustainability of the new institution.