Designed by Steven Holl Architects, the ICA is a gateway between university and city, anchoring Richmond’s vibrant arts district

On April 21, Virginia Commonwealth University will unveil the Institute for Contemporary Art, a new, noncollecting contemporary art institution designed by Steven Holl Architects. The ICA will open with the inaugural exhibition, Declaration, an exploration of contemporary art’s power to respond to pressing social issues through the voices of 33 emerging and established artists from Richmond and around the globe. 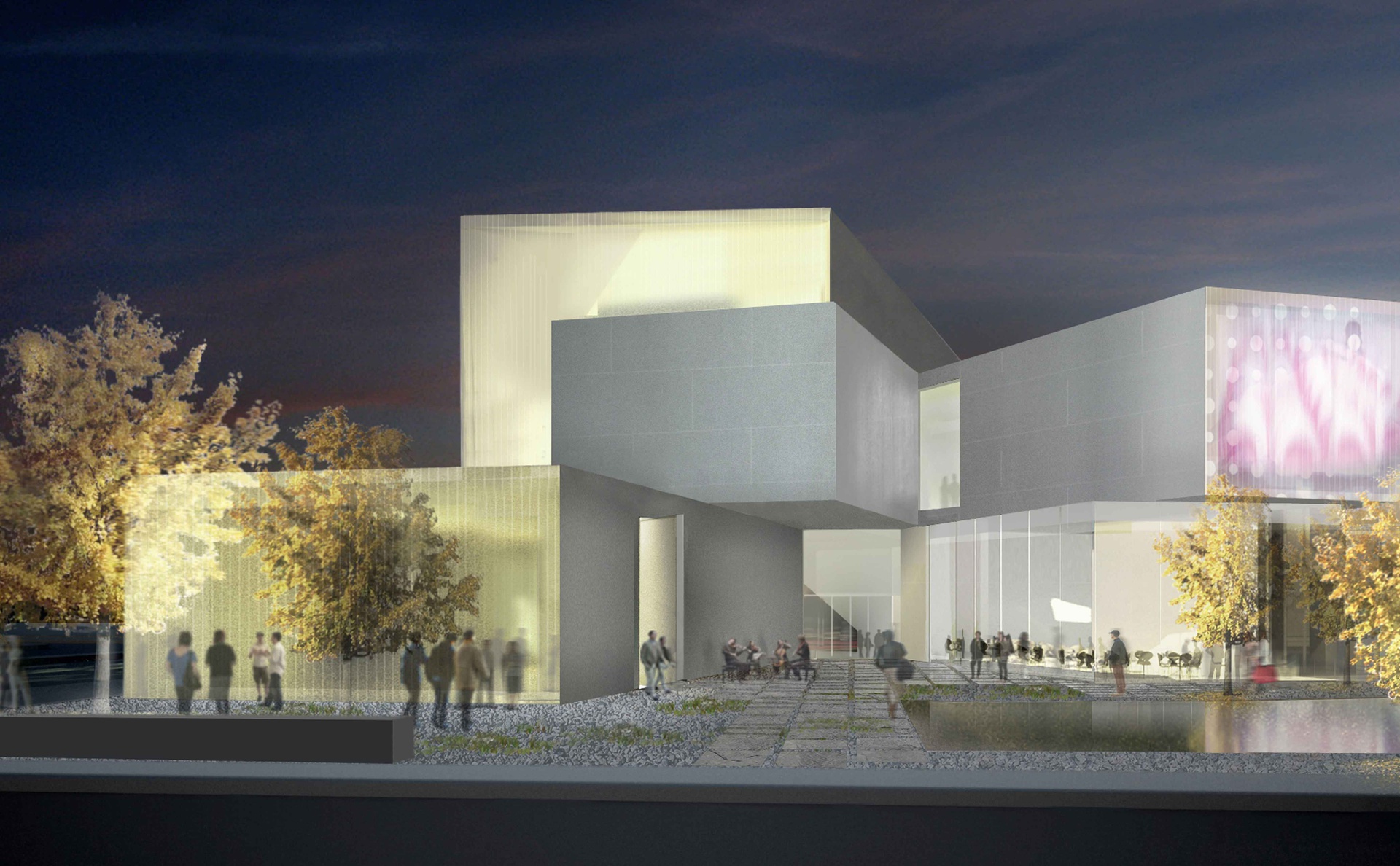 Designed by Steven Holl Architects, the ICA is a gateway between university and city, anchoring Richmond’s vibrant arts district

On April 21, Virginia Commonwealth University will unveil the Institute for Contemporary Art, a new, noncollecting contemporary art institution designed by Steven Holl Architects. The ICA will open with the inaugural exhibition, Declaration, an exploration of contemporary art’s power to respond to pressing social issues through the voices of 33 emerging and established artists from Richmond and around the globe.

More than a third of the works in Declaration will premiere at the ICA, including site-specific installations by Paul Rucker, Stephen Vitiello, and Peter Burr with Porpentine Charity Heartscape; new works in all media by Autumn Knight, Deb Sokolow, Lily Lamberta and All the Saints Theater Co., Sonya Clark, Andrea Donnelly, Edie Fake, Cannupa Hanska Luger and Geof Oppenheimer; and performances and participatory works at the ICA extending into the city by Rucker, Hope Ginsburg, Marinella Senatore, Winter Count, Tania Bruguera and Amos Paul Kennedy Jr., among others. The exhibition will remain on view through September 9, 2018.

In conjunction, the ICA will present related programs throughout the duration of the exhibition, including a pair of audio tours featuring both the building’s architecture and its inaugural exhibition, Declaration with insights from architects Steven Holl and Chris McVoy, select Declaration artists, Richmond Mayor Levar Stoney, VCU President Michael Rao, members of the ICA team and voices from the community. There will also be opportunities for visitors to request personalized in-person tours of Declaration focusing on any theme they wish, as well as an “Artists Choice” monthly series — kicked off by VCU School of the Arts professor Stephen Vitiello — an evening program curated by artists, bringing a range of perspectives to the new institution

“Why a declaration? Because declarations are strong statements that mark beginnings, clarify intentions and propose a social contract,” said Stephanie Smith, ICA’s chief curator. “This is true whether we think about something as personal as a declaration of love between two people, or as grandly public as the Declaration of Independence. Simultaneously grounded in our rich local context and engaged with global concerns, Declaration affirms the ICA’s commitment to researching, supporting and sharing projects that strengthen the common good.”

“We are delighted to share more details about our opening exhibition and programs to demonstrate the role that the ICA can play in Richmond and beyond,” said Joseph H. Seipel, interim director of the ICA. “Given our location on a major research university campus, the ICA can serve as a forum for open dialogue, collaboration and sharing perspectives. I look forward to welcoming our Richmond, VCU and art world communities to the ICA in April.”

Located at the intersection of Richmond’s historic Belvidere and Broad streets, the ICA anchors one of the city’s busiest junctures. The new building provides a striking new gateway for Richmond, with dual entrances opening to the city’s arts district on one side and VCU’s Monroe Park campus on the other. Free of charge, the ICA will be a significant new cultural resource for Richmond and VCU, in direct dialogue with VCU School of the Arts, the No. 1-ranked public school of art and design in the United States. The ICA will offer a vital new dimension to a premier urban research university and contribute to a national and international cultural dialogue. With nearly 41,000 square feet of flexible space, including an inviting 33-foot-high central forum, the ICA will feature a dynamic slate of changing exhibitions, performances, films and interdisciplinary programs. Its fluid spaces are designed to support the diverse practices characteristic of the art of today, mirroring VCU’s interdisciplinary approach and supporting the varied needs of contemporary art and audiences.

The ICA’s inaugural exhibition showcases the transformative power of art and artists. Featuring a dynamic, cross-generational group of established and emerging artists, Declaration includes many exciting new commissions — including several created in collaboration with the VCU and Richmond communities. Themes such as racial justice, gender, communication across barriers, human impact on the built and natural environment, and responses to social dysphoria weave throughout the exhibition, emerging through a variety of artistic media and methods of impact. Art will fill the fluid volumes of the building, activating sites beyond the ICA’s four galleries, from the entrance forum to the café to the auditorium, as well as off-site collaborations and performances. The ICA’s open circulation will allow visitors to experience the exhibition in a nonprescribed sequence from multiple sightlines, reinforcing the importance of choice and agency and the wide range of responses that art can foster.

Declaration will feature new commissions and premieres, including:

The open design of the ICA features dynamic exhibition and programming spaces that can be creatively activated to support widely varied forms of contemporary art. The glass walls and windows create continuity between the interior and exterior spaces of the building. On the first floor, a 4,000-square-foot gallery and café, bar, and concept shop radiate from the ICA’s central forum and frame an outdoor garden, which Steven Holl describes as the “Thinking Field,” that will be used for social gatherings and public programs. The first floor also features a state-of-the-art 240-seat auditorium for film screenings, performances, lectures, and other programs. The second floor includes two forking galleries and an adaptable “learning lab” for interactive engagement. It also includes a publicly accessible terrace, featuring one of four green roofs. The third floor features a gallery with soaring, 33-foot-high walls and houses one of the administrative suites and the boardroom. Additional staff offices are located in the building’s lower level, which also includes a lobby for visitors, art storage and preparation facilities, a fabrication workshop, a green room, the catering kitchen, and general storage.

“We designed the ICA to be a flexible, forward-looking instrument that will both illuminate and serve as a catalyst for the transformative possibilities of contemporary art,” said architect Steven Holl. “Like many contemporary artists working today, the ICA’s design does not draw distinctions between the visual and performing arts. The fluidity of the design allows for experimentation and will encourage new ways to display and present art that will capitalize on the ingenuity and creativity apparent throughout the VCU campus.”

In keeping with VCU’s master sustainability plan, the ICA’s design incorporates state-of-the-art technologies and environmentally conscious design elements, and makes use of numerous natural resources. The pre-weathered, satin-finish zinc exterior of the Markel Center, which houses the ICA, includes interspersed clear- and translucent-glass walls and skylights that infuse the building with natural light and lessen the reliance on nonrenewable energy. These include the use of geothermal wells to provide heating and cooling energy for the building, and four green roofs to absorb storm water, offset carbon emissions, and maximize insulation. Native plantings include wood oats, little bluestem, Pennsylvania sedge, and goldenrod. Building materials include Virginia bluestone and custom glass cavity walls, designed to exhaust heat in the summer and harness it in the winter. The project is designed to meet LEED Gold Certification standards.

Major gifts from the Saunders Family Foundation, Dominion Energy, McGuireWoods, and a number of individual donors during the summer of 2017 helped close the capital campaign. Support for the ICA’s opening events is provided by Altria Group.

The ICA also is raising funds for an endowment campaign to sustain the legacy of the ICA for generations to come, with an initial $12-million goal.