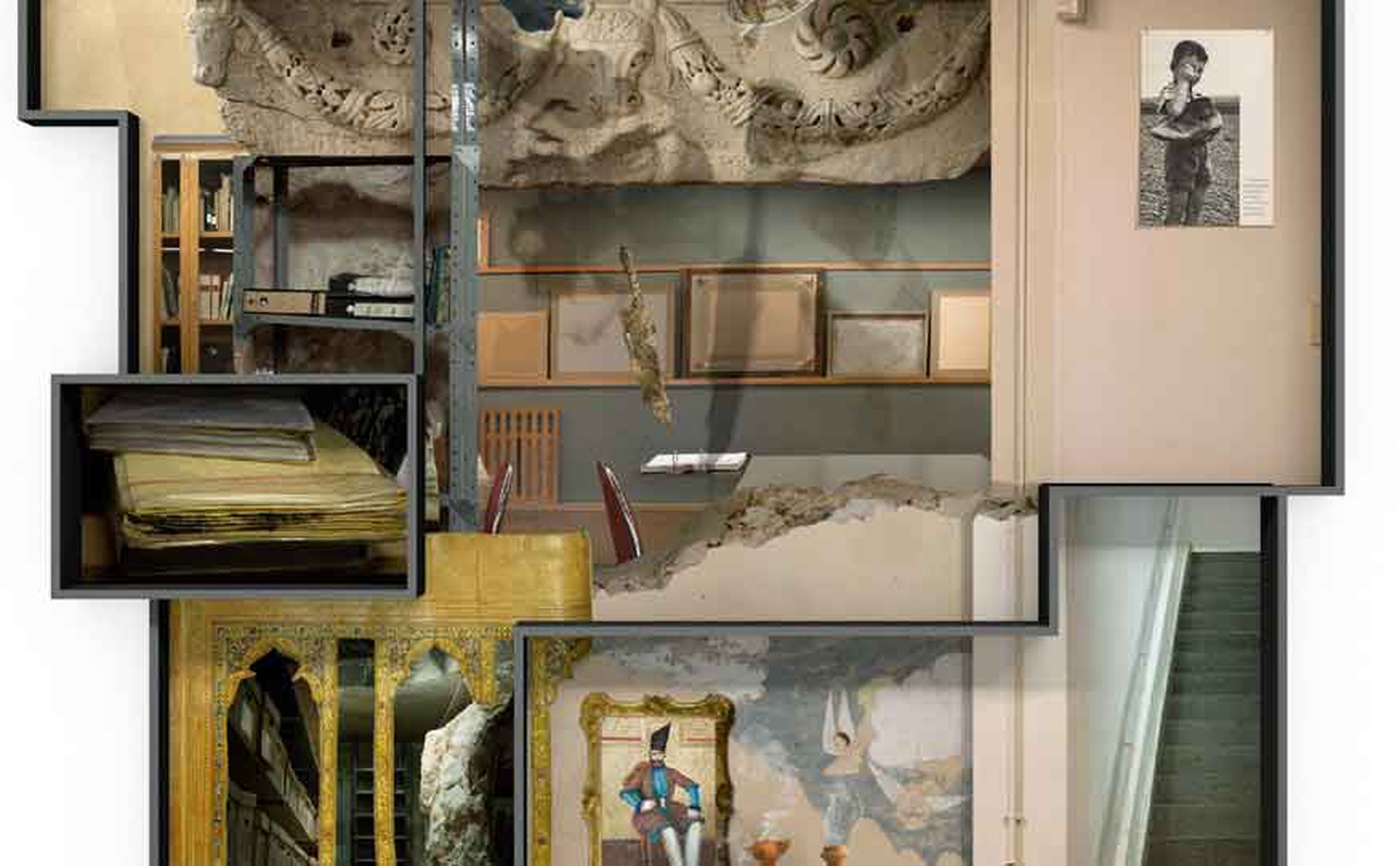 Image
Under the surface only the very things could be seen, 2017, inkjet print with gold leaf. Courtesy of the artist and the Braverman Gallery.

A culmination of three years of on-site research at the Israel Museum, No Thing Dies premieres a new series of works by Israeli-based artistIlit Azoulay. On view June 2 – October 28, 2017, the exhibition features large-scale digital collages that combine photographs of rarely seen objects and spaces inside the Museum, discovered by Azoulay after interviewing past and current curators, conservators, and archivists. Representing a web of stories and memories, the works are embedded with hidden layers of history relating to objects in the collection and the Israel Museum’s evolution since its founding in 1965.

“It’s been a rare privilege to work with an artist for such an extended period and provide unfettered access to the inner workings of our Museum as an integral element to Ilit’s creative process,” said Dr. Noam Gal, the Israel Museum’s Horace and Grace Goldsmith Curator of the Noel and Harriette Levine Department of Photography. “Ilit embarked on an excavation to unearth alternative narratives that are not apparent, but whose existence comprises the story of the Israel Museum. The result is a profound body of work that reflects the subconscious of an institution whose mission is to protect and share with the public the full breadth of world culture.”

In creating this series, Azoulay interviewed past and current Israel Museum staff members, using their testimonies as a guide for gathering information on rarely seen objects and spaces that carried special meaning for her subjects. Granted unprecedented freedom in exploring the Museum’s galleries and storerooms, Azoulay meticulously documented and catalogued objects from all facets of the Museum’s collections, ranging from Second Temple Period artifacts to African art to East Asian architecture. Utilizing the unique method of working for which she is known, Azoulay macro-photographed each object from numerous points of view, resulting in highly magnified depictions that she digitally combined into new works. The resulting images, printed and embellished with paper, wood, glass, and gold leaf, showcase the artist’s ability to transform rarely seen artifacts and seldom explored spaces into works of contemporary art.

The inspiration for the visual structure of the series is drawn from a collection of paper frames cut out from a book of Medieval Persian miniatures. Because the works were manipulated by their previous owner, they have never been on display at the Museum. Azoulay, inspired by both their form and content, photographed the frames and used them as dominant elements in her collages. Other aspects of her project were influenced by the miniatures themselves, including the positioning of figures, the textured quality of backgrounds and landscapes, and the presentation of narrative.

Ilit Azoulay is considered one of the most internationally acclaimed artists working in Israel today. Recent exhibitions include A Seventh Option (2015) at Andrea Meislin Gallery, New York; Implicit Manifestation (2014) at Herzliya Museum of Contemporary Art, Herzliya; Shifting Degrees of Certainty (2014) at KW Institute for Contemporary Art, Berlin; and Linguistic Turn (2013) at Braverman Gallery, Tel Aviv. Born in Israel in 1972, Azoulay received her BFA (1998) and MFA (2010) from the Bezalel Academy of Art and Design, Jerusalem, and currently lives and works in Tel Aviv-Jaffa. She is the recipient of the Constantiner Photography Award for an Israeli Artist, Tel Aviv Museum of Art (2011); the Israeli Culture and Sports Ministry Prize (2011); Mifal ha-Pais Foundation Grant (2013); and was among the finalists of the Pictet Prize for Contemporary Photography (2015).

No Thing Dies is curated by Dr. Noam Gal, the Israel Museum’s Horace and Grace Goldsmith Curator of the Noel and Harriette Levine Department of Photography. The project is supported by Outset Israel. In conjunction with the exhibition, the Ruth Kanner Theatre Group will present several live performances inside the exhibition, featuring recited segments of the interviews Azoulay conducted.