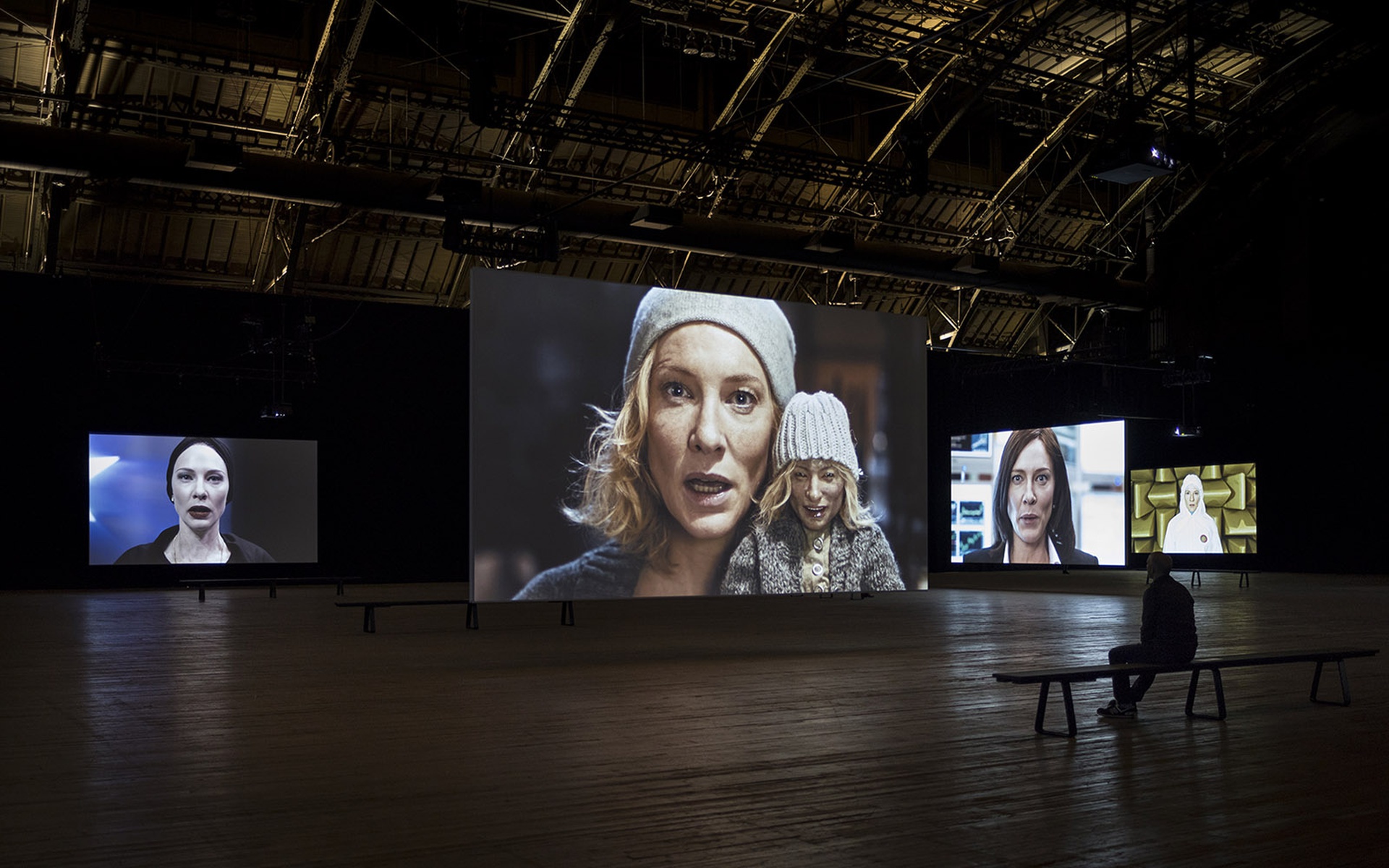 Park Avenue Armory mounts the North American premiere of Manifesto—a work by Julian Rosefeldt that stars Academy Award-winner Cate Blanchett. Inspired by the tradition of artist manifestos, Manifesto is a collage of artistic declarations of the 20th century reinterpreted as poetic monologues that provoke timeless questions about the artist’s role in society. Rosefeldt adapts the installation in a site-specific presentation for the Armory’s Wade Thompson Drill Hall, where it is on view December 7, 2016 – January 8, 2017. Manifesto is the first engagement of the institution’s 2017 season, the 10th anniversary of artistic programming for the pionerring organization.

The 13 scenes that comprise Manifesto draw on more than 50 milestones of artist manifestos from the past century, woven together into dramatic soliloquies that highlight specific movements or schools of thought. The texts are brought to life by Blanchett, who creates 13 different roles in a kaleidoscopic series of characterizations ranging from a funeral orator to a TV anchorwoman to a corporate CEO to a homeless man. Presented simultaneously on adjacent screens, the text and images blend together into a highly theatrical cinematic installation that recaptures the defiant spirit of its source material for a contemporary audience.

“As an institution dedicated to pushing the boundaries of artistic convention, the Armory is an ideal setting for a work like Manifesto that takes up artistic iconoclasm as its very subject,” said Rebecca Robertson, President and Executive Producer of Park Avenue Armory. “We are thrilled to be working with Julian Rosefeldt on an immersive installation of this daring work, and to offer our audiences the opportunity to experience Cate Blanchett’s astonishingly diverse and affecting performances.”

“Manifesto is a singular work of creative vision, which furthers the Armory’s tradition of mounting multidisciplinary projects that defy categorization,” said Pierre Audi, Artistic Director of Park Avenue Armory. “We are pleased to bring this soaring tribute to the artist manifesto, the result of an ambitious collaboration between two world-class artists, to our majestic drill hall in a site-specific installation.”

Though manifestos are most commonly associated with political movements, the 20th century saw the appropriation of the form in an artistic context, beginning with Filippo Tommaso Marinetti’s “Futurist Manifesto” in 1909. The texts quoted in Manifesto survey major artistic revolutions of the past 100 years, from influential movements like Dadaism, Surrealism, and Minimalism to insurgent artist collectives like The Blue Rider. By reconstituting historical manifestos by a mostly male authorship as monologues delivered by a female performer in contemporary settings, Rosefeldt invites viewers to consider the gendered, social, and political contexts that shape artistic disruption.

An artist and filmmaker whose work often explores the boundaries of historical and artistic representation, Rosefeldt has described Manifesto as an homage to the artist manifesto as a literary form. The installation’s textual collage quotes some of the most notable artists and theorists of the past century at very early stages in their careers, including Tristan Tzara, Kazimir Malevich, André Breton, Claes Oldenburg, Yvonne Rainer, Sturtevant, Sol LeWitt, Jim Jarmusch, Mierle Laderman Ukeles, and many others. In a nod to the political origins of the manifesto tradition, Manifesto also includes a “Prologue” segment, in which Blanchett’s voice recites words by Tristan Tzara and the first line from Marx’s and Engels’ “Manifesto of the Communist Party” set against the metaphorically charged image of a burning fuse.

Manifesto received its world premiere in December 2015 at the Australian Centre for the Moving Image in Melbourne, which co-commissioned the work with Nationalgalerie Berlin, Art Gallery of New South Wales Sydney, Sprengel Museum Hannover, and Ruhrtriennale Festival of the Arts. The work was further generously supported by Bayerischer Rundfunk, Medienboard Berlin Brandenburg, and Burger Collection Hong Kong. Rosefeldt presented Manifesto at the Ruhrtriennale this summer, before the Armory’s North American premiere.

Admission to Manifesto is $20; free for Armory members. Tickets and subscriptions may be purchased at armoryonpark.org or by calling (212) 933-5812.

Artist and filmmaker Julian Rosefeldt and artist Ralph Lemon discuss the creation of Manifesto and, in particular, how its source material relates to the social and political issues of today.

Ralph Lemon is a choreographer, writer, visual artist and curator, and the Artistic Director of Cross Performance, a company dedicated to the creation of cross-cultural and cross-disciplinary performance and presentation. He is a Board Member of the Park Avenue Armory and former Artist-in-Residence. Lemon’s most recent works include Scaffold Room (2015), Four Walls (2012), and How Can You Stay in The House All Day And Not Go Anywhere? (2008–2010), works with live performance, film and visual art that toured throughout the U.S. In 2012, Mr. Lemon was honored with one of the first Doris Duke Performing Artist Awards; he was also one of the first artists to receive the United States Artists Fellowship (2006). He is recipient of three “Bessie” Awards (1986, 2005, 2016); two Foundation for Contemporary Art Awards (1986, 2012); two New York Foundation for the Arts Fellowships (2004, 2009); a 2009 Guggenheim Fellowship; a 2004 Bellagio Study Center Fellowship; and the 1999 CalArts Alpert Award. Among his many teaching positions, Mr. Lemon has been an IDA Fellow at Stanford University (2009); artist-in-residence at Temple University (2005–06); Miller Endowment Visiting Artist at the Krannert Center (2004); Fellow of the Humanities Council and Program in Theater & Dance at Princeton University (2002); and Associate Artist at Yale Repertory Theatre (1996–2000). He received a 2015 National Medal of Arts from President Barack Obama. The first monograph of his work was published by The Museum of Modern Art (part of their new Modern Dance Series) in 2016. Lemon is currently a Visual Arts Mentor at Columbia University School of the Arts.