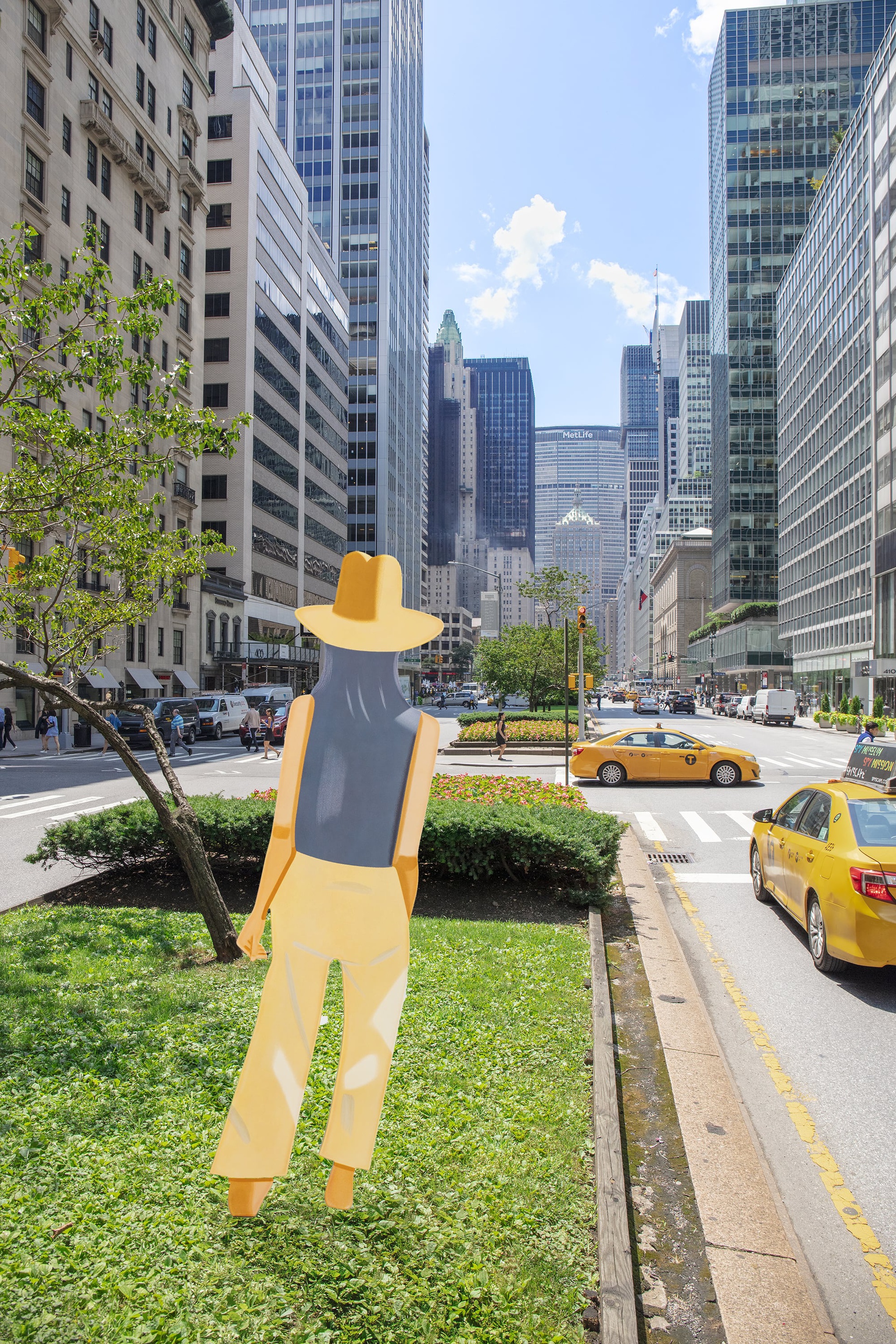 Kasmin is pleased to announce a forthcoming exhibition of public sculpture by Alex Katz (b.1927) in collaboration with Lococo Fine Art Publisher. Seven large-scale works will go on view along New York’s Park Avenue between August 26 – November 10, 2019, as part of an ongoing exhibition program presented by The Sculpture Committee of The Fund for Park Avenue and NYC Parks' Art in the Parks program. Lining the central reservation between 52nd and 60th Streets, each work is an iteration of Park Avenue Departure, an eight-foot-tall cut-out depicting the artist’s wife, Ada, formed of porcelain enamel and steel.

Katz began producing cut-outs in 1959. Depicting characters from New York’s cultural coterie, the works move beyond representation, acting as vehicles for the artist’s lifelong exploration into formal arrangement and the complexities of surface. The Park Avenue presentation adds a third dimension: the works shift in their composition according to the sightlines of the viewer. The repetition of the sculpture—which depicts the back of a figure such as an anonymous pedestrian would be seen from behind whilst walking the street—is akin to optical illusion, compelling viewers to double-take.

Over a seven-decade career, Katz has investigated perception via the depiction of the human figure. His works, characterized by vibrant color and a flat, clean aesthetic, recall both the graphic language of advertising and the scale and power of Abstract Expressionism. Katz has been the subject of over 200 solo exhibitions and nearly 500 group shows internationally and has had retrospectives at institutions such as The Whitney Museum of American Art, New York; The Brooklyn Museum of Art, New York; The Jewish Museum, New York; The Saatchi Gallery, London; Tate St. Ives, UK; Turner Contemporary, UK; Albertina Museum, Vienna; and The Guggenheim, Bilbao, and The Irish Museum of Modern Art, Dublin.

Kasmin’s long-standing dedication to the presentation of large-scale sculpture has led to the facilitation of public art projects across New York and internationally, with recent examples including: Bosco Sodi’s Muro in Washington Square Park, New York (2017), Les Lalanne’s Sheep Station in Chelsea, New York (2013), and Mark Ryden’s Dodecahedron at PMQ Gardens, Hong Kong (2018). Previous collaborations with The Sculpture Committee of The Fund for Park Avenue include exhibitions of large-scale sculpture by Will Ryman (2011) and Les Lalanne (2009).

For over 50 years, NYC Parks’ Art in the Parks program has brought contemporary public artworks to the city’s parks, making New York City one of the world’s largest open-air galleries. The agency has consistently fostered the creation and installation of temporary public art in parks throughout the five boroughs. Since 1967, NYC Parks has collaborated with arts organizations and artists to produce over 2,000 public artworks by 1,300 notable and emerging artists in over 200 parks. www.nyc.gov/parks/art.