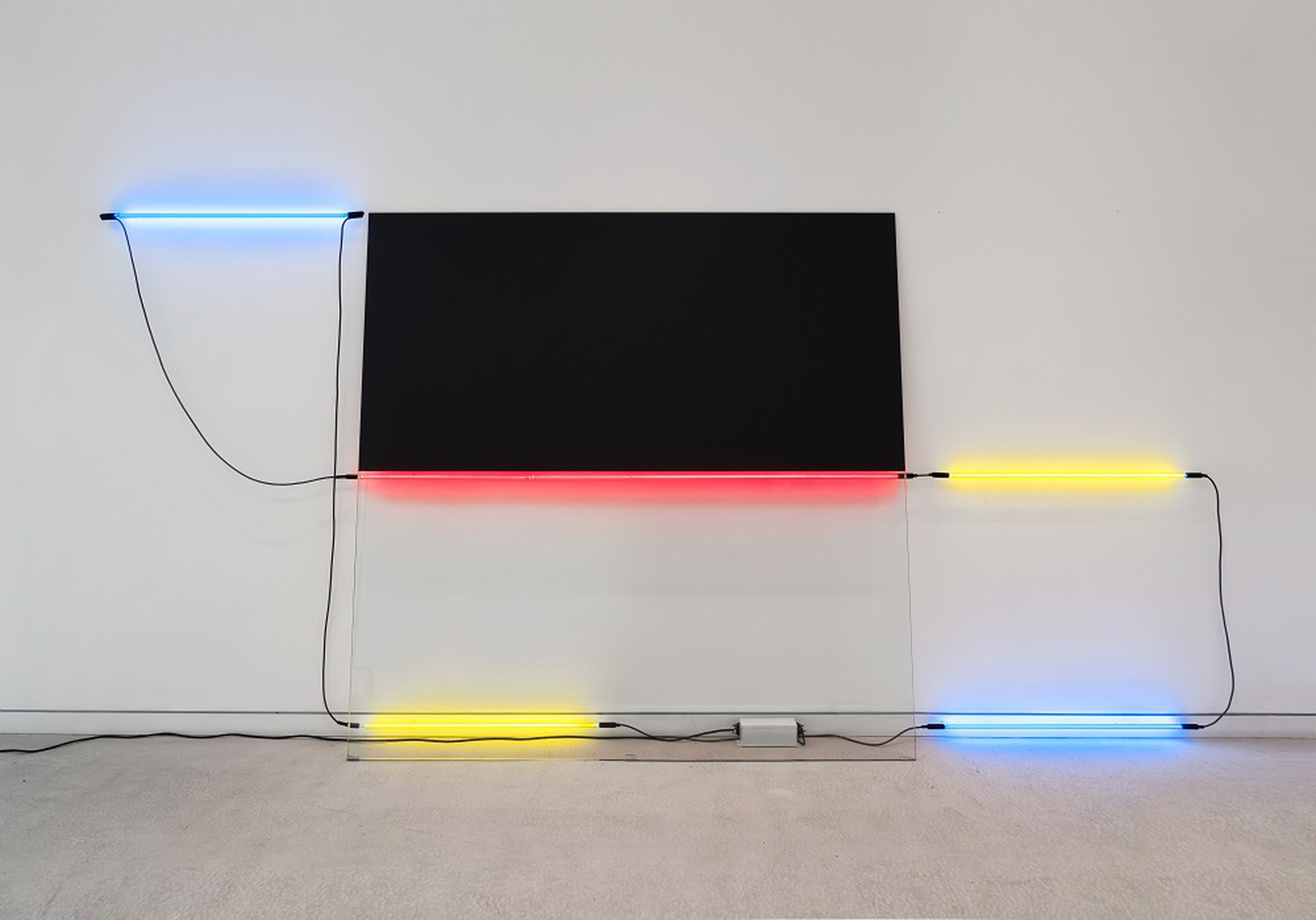 Kasmin is delighted to announce an exhibition of seminal work by Keith Sonnier at the gallery’s flagship space in Chelsea, New York, on view between November 21, 2019, and January 11, 2020. Large-scale works from the ongoing series Ba-O-Ba, which the artist began in 1968, utilize large panes of glass and Sonnier’s signature neon tubing in an abstract composition that forms a confluence between the sculpture and the gallery wall and floor. The neon’s linear quality allows the artist to “draw in space” with light and color, transcending the traditional limits of sculpture in an idiosyncratic visual style now inextricably associated with Sonnier. Based on the Greek mathematical theory of the Golden Ratio, the works are quintessential examples of Sonnier’s ability to masterfully synthesize architecture and light, speaking to a formal inventiveness that has defined nearly six decades of work.

Atmospheric and immersive, Louisiana Suite transforms the architectural space of the gallery into a highly sensory physical and visual experience for the viewer. Developing his earlier work with glass neon mirrors, Sonnier seductively employs colored neon and contrasting glass panels—some perfectly transparent, others dramatically opaque—that together reference both stage sets and large-scale architectural installations. Despite their ephemeral incandescence, the ever-present organizing principles of proportion and balance ground the works in a material reality.

Fabricated for the first time since their conception in 1970, and exhibited alongside the original drawings, the works in Louisiana Suite energetically continue the artist’s most renowned series. Their title, Ba-O-Ba, derives from a patois phrase familiar to Sonnier from his upbringing in Louisiana. Translated as “bath of color” or “light bath,” the seriesrelates to a deeply personal bank of memories. The artist recalls: “I was in Haiti once and there was a boat called ‘Ba-O-Ba’. It was the name of a little boat on the beach in the town of Jacmel. And the fisherman told me that he named it ‘Ba-O-Ba’ because he always went out at night to fish by moonlight.” In another memory, Sonnier describes “driving in Louisiana: coming back from a dance late at night and driving over this flat land and seeing these waves of light going up and down in a thick fog.” Incorporating both urban and organic references—flashes along the highway or the way that moonlight might fall on the water’s surface—the works both draw upon and inspire a reverence traditionally reserved for religious experience.

Sculptures from this series have been exhibited worldwide, and many are in the permanent collections of institutions around the world, including the Guggenheim, New York and Guggenheim Abu Dhabi, the National Gallery of Australia, the Whitney Museum of American Art, the Museum of Contemporary Art, Los Angeles, MUMOK Vienna, and Kunstverein St. Gallen, Switzerland. They have also formed large-scale architectural installations: Ba-O-Ba Berlin (2002), Neue Nationalgalerie, Berlin and Ba-O-Ba Lever House (2003), Park Avenue, New York.

One of the original post-minimalists, Keith Sonnier (b. 1941, Louisiana) came of age in New York in the 1960s alongside artists such as Bruce Nauman, Richard Tuttle, Eva Hesse, Joel Shapiro, Richard Serra, Jackie Winsor, Lynda Benglis and Barry Le Va. His adoption of the use of incandescent light, specifically neon, in 1968 constituted a shift away from his previously materially diverse work which included latex, electrical transmitters, and satin.