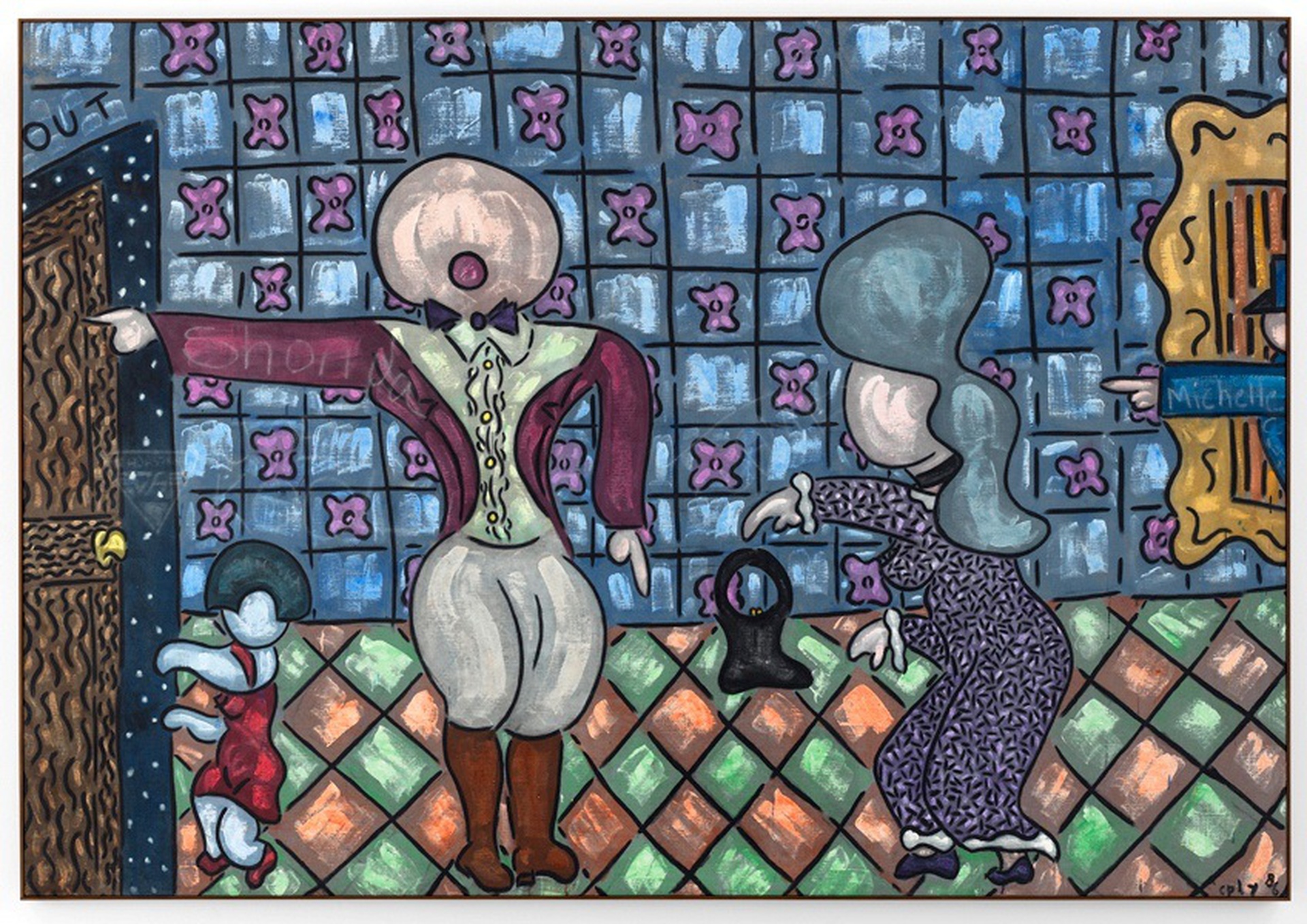 Kasmin is pleased to present William N. Copley: The New York Years, a comprehensive look at the evolution of the artist’s painting during three pivotal decades in New York City. The exhibition, on view at 509 West 27th Street from March 11, 2020, will trace this central period through key paintings from multiple series and a corresponding presentation of photographic, publishing, and research materials drawn from the archives of the William N. Copley Estate. This is Kasmin’s sixth solo exhibition of the artist’s work since the gallery began representing the Estate in 2010.

“I’d been born in that town but didn’t remember it,” Copley said of New York in his memoir Portrait of the Artist as a Young Dealer. Copley’s decision to move to the city—when the artist was 44—marked a return to the American scene after twelve years living in France. Copley’s early career had been one of a self-taught outsider working in Paris, where, under the influence of Surrealism, Copley developed a unique personal iconography. This “private mythology,” as he would call it, explored sexual politics and his culturally repressive upbringing. Copley’s eccentric style and his humorous, amatory themes led to commercial success and exhibitions throughout Europe in the 1950s. Copley returned to the US in 1963, at a time when the Paris scene had grown quiet and New York was enjoying a period of explosive artistic activity.

Included in the exhibition are major works originally exhibited at Copley’s first shows as an artist based in New York. These works, such as Tomb of the Unknown Whore (1965) and What’s Your Hurry (1965), reveal Copley’s shift to working at a larger scale and utilizing line drawing as a technique in his paintings. Copley’s switch from oil paints to acrylics, which allowed him to work faster and gave him new freedoms, coincided with a prolific series of colorful, narrative paintings adapted from the works Robert W. Service and other folk balladeers popular in the late 19th and early 20th century. These paintings are represented in The New York Years with Then In Meandered Deep-Hole Dan Once Comrade of the Cup (1967). Of special note in the exhibition is the large painting I am Awarded My Handbag and Declared a Professional (1986), which was displayed in the artist’s immersive New Museum installation Tomb of the Unknown Whore in 1986. It is exhibited here for the first time in New York since the original exhibition.

Beginning in 1970, Copley started rendering items from old Sears, Roebuck & Co. catalogs in a loose, suggestive manner. Dubbed the Nouns, these everyday items were paired with geometric background patterns in a style similar to, or quietly critical of, Hard-edge and Op-style painting. Copley at once further developed this painterly language and consummated his interest in erotic subject matter with the X-R ated series, which he began two years later in 1972. Indebted to the adult magazines sold along 42nd street and Times Square, the works feature figures in various stages of sexual congress and are marked by bold contour lines and lyrical color palettes. Speaking of the X-Rated exhibition held at the New York Cultural Center in 1974, Copley remarked, “I am attempting to break through the barrier of pornography into the area of joy.” Works from the Nouns and X-R ated series are presented in dialogue in William N. Copley: The New York Years.

New York also provided Copley an ideal setting for his non-painting activities. In 1967, Copley founded The Letter Edged In Black Press, Inc., which published the groundbreaking art periodical S.M.S. for six issues in 1968. S.M.S. featured facsimile multiples from an intergenerational group of artists, many of whom Copley met in New York and who would congregate at the artist’s publishing office on the Upper West Side. (Among the friends and contributors were Roy Lichtenstein, Bruce Nauman, Yoko Ono, Christo, Lee Lozano, John Cage, and Copley’s close friend and mentor Marcel Duchamp.) S.M.S. publications will be on view in the exhibition along with associated artworks and ephemera.

In the 1980s, Copley began dividing time between New York and homes in Roxbury, Connecticut, and Key West, Florida. Though he began to withdraw from New York’s art world, he maintained a prolific focus on painting and his work grew in complexity and ambiguity. The late gallerist Phyllis Kind—known for her patronage of outsider art and directive support of the Chicago Imagists—became Copley’s primary New York dealer, staging five solo exhibitions at her Greene Street space in Soho between 1982 and 1991. Untitled (Apples & Oranges) (1986) dates from this period and is exemplary of Copley’s late style, employing multilayered compositions and collaged textiles such as lace fabric.

In addition to the key works on view, William N. Copley: The New York Years will present a timeline of the artist’s numerous activities during his tenure in New York. Visitors will encounter an in-depth picture of his consequential return to the New York scene, where Copley forged his mature identity as an artist and painter.

William N. Copley, (1919–1996), known by his signature name CPLY, (pronounced 'see-ply'), was a painter, writer, gallerist, art patron, publisher, and art entrepreneur. In his lifetime, Copley was the subject of multiple European retrospectives, including Stedlijk Museum (1966), Kunsthalle Bern (1980), and Kestner-Gessellschaft (1995). Recent major institutional exhibitions have been held at The Menil Collection, Houston, and Fondazione Prada, Italy. His work is held in private and public collections worldwide, such as the Museum of Modern Art, Whitney Museum of American Art, Stedelijk Museum and many more.