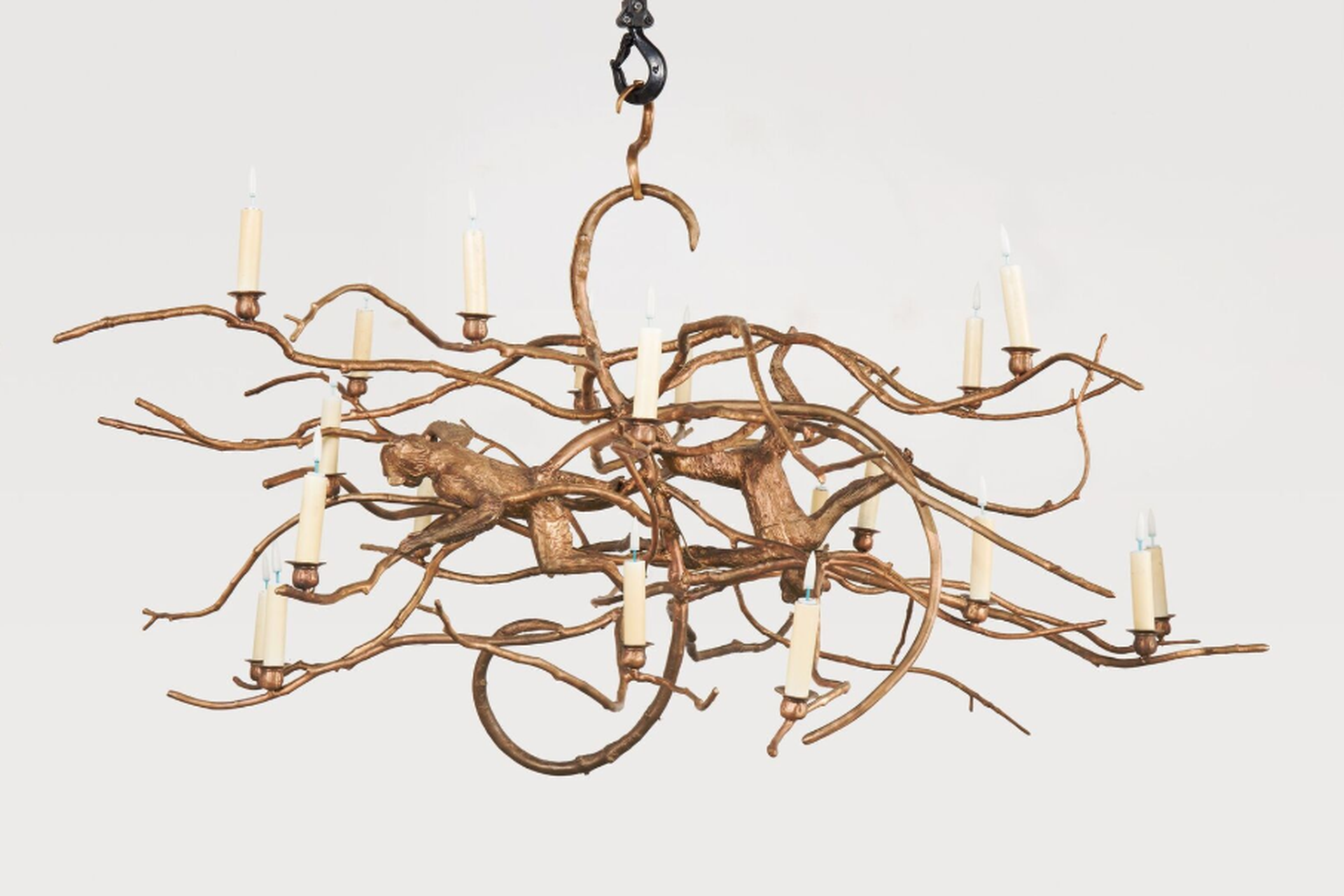 Kasmin gallery today announces its exhibitions program for January 2019, featuring five presentations that continue the gallery’s innovative program placing historic figures of Post-War art in dialogue with the evolving practice of established and emerging artists working today, and transcending the line that separates fine art from design. Marking the launch of Kasmin’s winter season, these exhibitions will open on January 24, 2019, across four of the gallery’s spaces at the intersection of Tenth Avenue and 27th Street in the heart of Chelsea.

For the January program, French artist duo Les Lalanne will transform Kasmin’s new flagship gallery space with their fantastical sculptures in an environment designed by master landscape architect Louis Benech; Kasmin will bring together 19 of Andy Warhol’s intimate polaroids of friends and celebrities including Dolly Parton, Muhammad Ali, Debbie Harry, and more; LA-based painter Theodora Allen will present her first solo show with Kasmin of new work exploring the space between the physical world and an interior mindscape; Kasmin will exhibit a group of new works by Matvey Levenstein speaking to the ongoing relevance of Romanticism in the 21st century; and the gallery will install three large-scale bronze works by Max Ernst in the Kasmin Sculpture Garden, marking the second presentation of monumental sculpture in Kasmin’s new rooftop garden viewable from the High Line.

Additional information on the January exhibitions program follows below.

Kasmin is pleased to present a new exhibition of work by French sculptors Les Lalanne. Designed in a unique collaboration with worldrenowned landscape architect Louis Benech, the presentation will kick off the year’s programming at Kasmin’s recently opened flagship gallery in Chelsea, New York. The exhibition will be on view from January 24–March 9, 2019.

Over thirty sculptures spanning the career of Claude and Francois- Xavier Lalanne, each hand-picked by Benech, transform the interior of Kasmin’s newest gallery space in an installation featuring passageways reminiscent of the artists’ studio garden in Ury, France. The exhibition includes one of Claude’s rare chandeliers, Structure Vegetale avec Singes (2012), as well as a Miroir (2010)—a work from a series famously collected by Yves Saint Laurent for his “room of mirrors” in Paris. Francois-Xavier’s iconic monkeys (including Babouin (1984/1990) and the large-scale bronze Singe Avise (grand) (2005), a herd of the artist’s sheep, and his Oiseaux de Marbre (1974) chairs (originally made for legendary art dealer Alexander Iolas) explore the contrasting solidity that can be found in the natural world.

Louis Benech, who has designed the exhibition in collaboration with Kasmin and Claude Lalanne, says of his longstanding relationship with the artists: “I often had to work in places with sheep grazing, I mean, Lalanne’s sheep grazing—in Meautry, La Mormaire, Montfort-l’Amaury. Thereafter, I rapidly met Claude and François-Xavier. They were designing with a friend the Jardin des enfants above the forum des Halles, right behind the church of Saint-Eustache. One day, we left ad lib to Ury for dinner. I thus discovered the grace of Claude’s garden, with dogwoods, hostas, and self-sowing hogweeds—which she uses for her sculptures and jewels. From that moment on, we consistently saw each other at least two times a year. Most of the time during a plant fair in Courson. It was there that Claude and François-Xavier usually found the plants flourishing in their garden, adorning Claude’s table or setting themselves in bronze or brass for an eternity of happiness. I miss François-Xavier, but Claude’s fantasy and voice lift my spirits up and bring back in memory the unique bond uniting them.”

Kasmin is pleased to present an exhibition of Andy Warhol’s polaroid portraits, on view from January 24 - March 2, 2019, at 297 Tenth Avenue, New York.

Beginning in the 1960s, Warhol carried a camera with him almost constantly, obsessively documenting both his personal life and the daily goings on in his studio, The Factory. These images, artworks in their own right, also acted as visual references and formed the basis of many of the artist’s drawings, silkscreens, and paintings. Highlighting the integral contribution of photography to his art-making process, Warhol referred to his Polaroid Big Shot camera (which he purchased in 1970) as his “pencil and paper.”

Taken between 1974 and 1985, the works feature notable figures such as Liza Minnelli, Muhammed Ali, Bianca Jagger, Dolly Parton, Debbie Harry, and Robert Mapplethorpe, as well as a selection of self-portraits. Bringing together some of the most recognizable faces of an era, the exhibition illuminates Warhol’s longstanding fascination with celebrities and famous movie stars—a motif that went on to define his oeuvre. Warhol was sensitively attuned to the potential of the image—in particular, photography—to shape meaning and to both reflect and reaffirm the wider cultural obsessions of the American public.

Warhol’s fascination with the transience of consumer and popular culture, as well as his concern with appearances and representation, make the polaroid a fitting medium. Notoriously socially awkward, Warhol could use the camera to mediate his interaction with the world, helping him balance between inclusion and exclusion. These works, developed instantaneously, were born in a particular place and moment in time. Their rarity, coupled with the dwindling production of Polaroid film, capture a crucial period in Warhol's practice and recall a nostalgic moment in the history of photography.

Kasmin is pleased to present weald, an exhibition of new paintings by Los Angeles based artist Theodora Allen.

For her first exhibition with the gallery and debut New York solo show, Allen presents two bodies of work: Shields (dwale) and Monuments (weald). Dwale from Old Norse, meaning deep sleep or trance; weald from the Old English for forest. The two words are anagrams, both archaic; one is landscape and the other mindscape.

The Shield paintings are a suite of intimately scaled still lifes, each variation set within the iconic shape of medieval armor. Executed in a muted palette of jeweltoned hues, the plants are both isolated and adorned, akin to scientific botanical illustrations used in early herbals and pharmacopeia. The storied herbage belong to a world of remedies, aphrodisiacs, sacraments, and poisons. They are killers or curers, sinners or saints. As emblems they are elusive, and carry the weight of existential inquiry.

In the adjoining room, the Monument series continues the theme of plants defined through time and ideology. Realized in a near-monochrome palette, this body of work takes on the symbols of a cup, a coin, a sword, and a branch—icons gleaned from allegorical card games of the middle ages through the 19th century. These subjects are bright white and cold, stone-like, set in a dense and overgrown forest of psychotropic plants. The luminous statuaries rest at the entrance of an arched passageway, seemingly between past and future.

Through a rigorous painting process, Allen’s evocative imagery becomes whisper thin. Translucent coats of oil paint are applied and removed, until the fabric itself shows the weather of its making. Pools of spilled watercolor are also visible among thin layers of oil paint. Allen plays with the tension between the organic lines of the watery edge against the linear and tight weave of linen. Evanescent subjects, polluted spectrums, and radiant blues animate the forces of surface and depth, darkness and light.

Kasmin is pleased to announce an exhibition of new works by Matvey Levenstein, on view at 293 Tenth Avenue between January 24 - March 2, 2019. Levenstein’s works depicting the North Fork of Long Island explore themes of history and representation, speaking to the relevance of Romanticism in the 21st Century. Imbued with a distinctly literary sensitivity, the exhibition brings together a selection of new works ranging in size and materials, including large sumi ink drawings, canvases that blur the distinction between landscape and stilllife, and smaller works realized on linen, copper, and wood. This is the artist’s first solo exhibition at the gallery.

Levenstein’s interest in sites that have a largely unexplored historical significance has led him to old pilgrim cemeteries and Gardiners Bay, a fork of the Atlantic once controlled by the British during the 18th-century’s Revolutionary War. Using an iPhone camera, Levenstein is able to quickly capture a scene’s formal properties before beginning his material investigation. Working with a limited palette on toned grounds, Levenstein’s distinctive compositions are characterized by the layers of paint built up meticulously over many months, and their foregrounding of nature in all its dramatic variety: the looming power of a stormcloud, tree branches dissecting a winter sky, and more quietly, a vase of cut flowers sitting on a dinner table. In Pink Moon (2018) a tiny orb hangs amidst a luminous sunset as two telephone poles, appearing as crucifixes, emerge tentatively from the bottom of the picture plane.

Kasmin is pleased to announce an exhibition of three large-scale bronze works by Max Ernst— the second in an ongoing program of public presentations in the gallery’s new outdoor sculpture garden, on view from January 24, 2019. Situated on the rooftop of Kasmin’s flagship gallery space at 509 West 27th Street, New York, the garden is viewable from The High Line.

At various moments throughout Ernst’s career, from his Cologne Dada period in the 1920s and onwards, the artist turned to sculpture in intense bursts of activity. The three examples in the present exhibition were conceived during one such period in the 1960s whilst Ernst was living in France. It was during this phase that the animal world—lush, overgrown, and natural—shifted into the foreground of the artist’s vision and began to manifest steadily throughout his work.

The towering pillar of Le génie de la Bastille (1960) is composed of four casts of fishing nets, presenting an avian figure as the emblem of freedom and the free spirit. Ernst envisioned a frog’s face in the middle of the bird’s upper body, and added two eyes to elucidate his vision, diligently watching over his viewers. The bird is a recurrent motif in Ernst’s work; an alter-ego character called “Loplop.”

The frog appears sporadically throughout Ernst’s oeuvre from the 1920s onward. The combined, jauntily assembled geometric shapes of Grand grenouille (1967) recall the artist’s investment in the principles of assemblage and frottage, and demonstrate his sculptural rigor. Le génie and Grand grenouille were employed by Ernst in the final design for the artist’s 1967 Amboise Fountain—a monument that still stands in the city’s center.

Big Brother (1967) belongs to a group of three sculptures that comprise Ernst’s Corps enseignant pour une école de tueurs (Teaching Staff for a School of Murderers). With works such as Big Brother, Ernst delves deeper into sculpture’s potential as a device by which he could meaningfully engage with the social politics of the time while retaining his biting sense of humor and sharp wit.