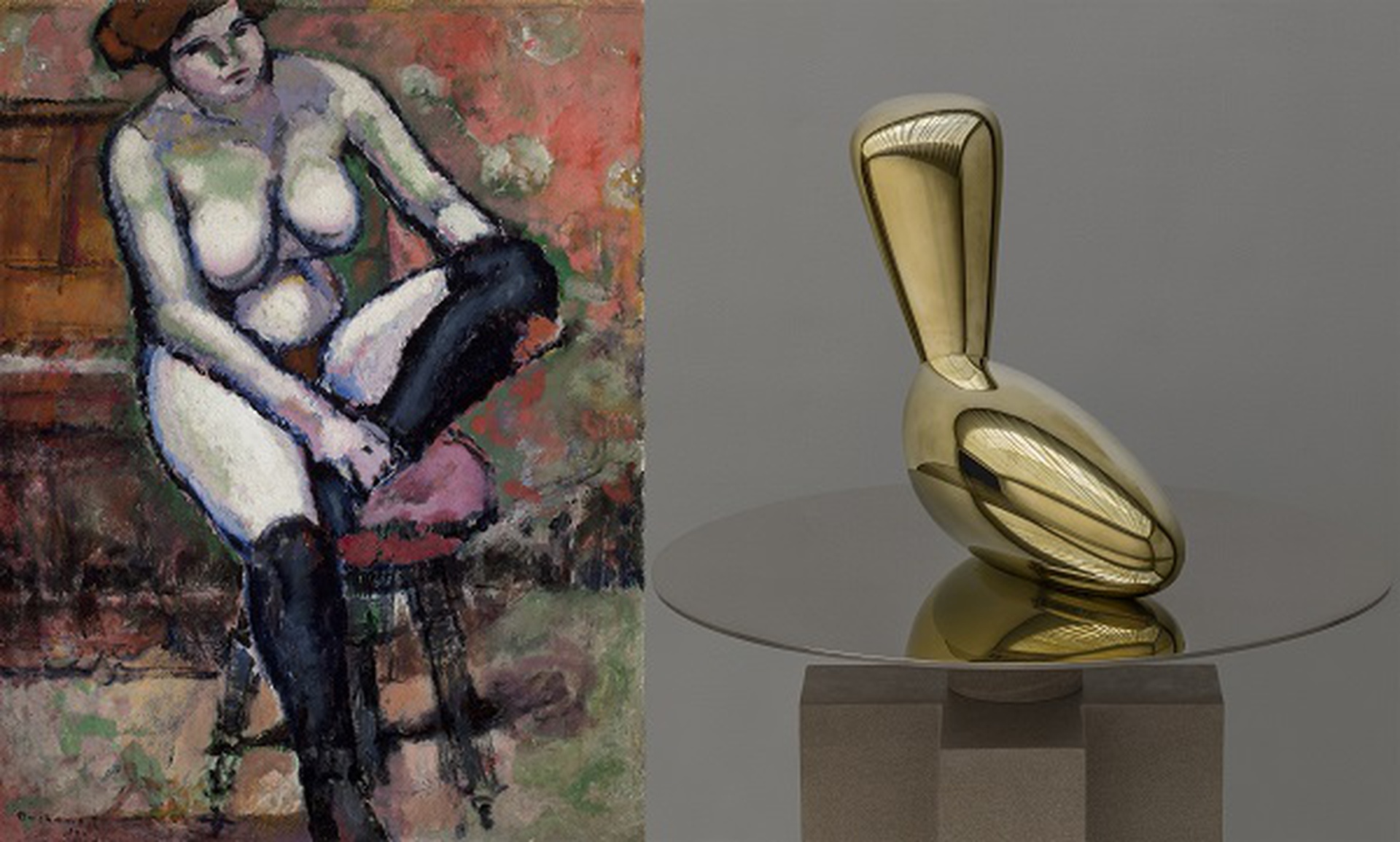 Kasmin gallery announces its exhibitions program for September 2018, featuring three presentations spotlighting understudied periods and works of four pioneering modern artists, including Constantin Brancusi and Marcel Duchamp, Stuart Davis, and Lee Krasner. Ranging in scale and mediums, all three exhibitions shed new light on the artistic processes and influences of these historic figures. Brancusi & Duchamp: The Art of Dialogue explores the overlooked aesthetic similarities and enduring friendship between two singular artists, Marcel Duchamp and Constantin Brancusi; Lines Thicken: Stuart Davis in Black and White brings together a body of rarely seen black-and-white paintings and works on paper that runs in contrast to the boldly colorful abstract works the artist is commonly associated with; and Mural Studies encompasses eight of Lee Krasner’s small-scale studies developed in 1940 for an unrealized Works Progress Administration mural painting.

Marking the launch of Kasmin’s fall season, these exhibitions will open on September 13 and 20 in advance of the gallery’s expansion with the inauguration of its fourth space in Chelsea on Wednesday, October 10, 2018. The new space will open with a solo exhibition of Walton Ford featuring a new series of large-scale watercolors about the iconic Barbary lion, as well as an installation of three large-scale bronze sculptures by Joel Shapiro on the gallery’s new rooftop sculpture garden.

Additional information on the September exhibitions program follows below.

Curated by Priscilla Vail Caldwell in collaboration with the artist’s estate, this exhibition focuses on a series of black and white paintings and works on paper by renowned American painter Stuart Davis. Already well known for his use of vivacious color, in the mid-1920s Davis started executing compositions in black and white. Eliminating color was a bold move for an artist whose work was distinguished by its vibrant palette and reflects the restlessness of an eternal maverick. This maneuver was also indicative of the nature of Davis’ rigorous, ongoing synthesis and reductive process. Davis consistently aspired to reach a wider audience with his work, which was defined by seriality and a resolute adherence to a restrained and meaningful vocabulary of shapes. This populist impulse was aligned with his political views which were shaped by his leading roles in organizations such as the Artists Union and The American Artists’ Congress and grown out of the belief that abstraction was the new realism, uniquely suited to expressing modern life.

Davis’ late black and white compositions are the apotheosis of his ever-evolving theories of “color space.” Relying upon nothing more than form and shapes of original drawings, they confirm the objective world and stand in strident opposition to the subjective nature of Abstract Expressionism. As it was for his admirer Donald Judd, it was crucial for Davis that something “known” be central to the making process. This position would be adopted by some of the most important artists to follow and is made clear in an enfilade of objects such as Judd’s stacks or Jasper Johns’ flags, targets, and numbers. In his black and white compositions, Davis made significant strides towards creating what he described as a “Universal Style.”

Lines Thicken: Stuart Davis in Black and White is the Estate’s first solo exhibition with Kasmin gallery who is now its exclusive worldwide representative. A special publication, containing previously unseen archival material that span the artist’s life and career, compiled and edited by the artists son Earl Davis, will be published on the occasion of the exhibition.

This exhibition brings together eight of Lee Krasner’s rarely exhibited small-scale, gouache-on-paper studies for an unrealized Works Progress Administration mural painting. Created in 1940 (the same year Krasner produced, in her own words, her “first abstract work”) the gouaches investigate varying configurations of geometric and biomorphic forms alongside linear elements reminiscent of Jean Arp and Joan Miró. A few years prior in 1937, Lee Krasner was assigned to finish a mural begun by Willem de Kooning after the artist was dismissed from the WPA project due to his lack of U.S. citizenship. Though Krasner did not complete the mural, her experience on the project influenced her own designs for the space depicted in these studies from 1940, specifically de Kooning’s interest in both Fernand Léger and the British Abstractionist, Ben Nicholson.

As well as giving a rare insight into a year of fundamental stylistic transition toward gestural abstraction, Krasner’s gouaches are historically significant in their documentation of an era of unprecedented government patronage of the arts. The WPA was created in 1935 to provide economic relief to U.S. citizens affected by the Great Depression. Until its closure in 1942, the WPA, in various iterations, commissioned tens of thousands of public artworks by artists.

Mural Studies is the second solo exhibition organized in conjunction with the Pollock-Krasner Foundation since Kasmin gallery announced representation of the Estate in November 2016.

Brancusi & Duchamp: The Art of Dialogue

Curated by art historian Paul B. Franklin, this exhibition explores the aesthetic dialogue between Constantin Brancusi (1876–1957) and Marcel Duchamp (1887–1968), two of the most inimitable and innovative artists of the twentieth century. Despite their remarkably different artistic trajectories and their seemingly divergent creative interests, Brancusi and Duchamp struck up a friendship in the 1910's that endured for decades. As well as installing and overseeing Brancusi’s first two major solo exhibitions in the United States in 1926–27 and in 1933–34, Duchamp also worked tirelessly alongside their mutual friend Henri-Pierre Roché on behalf of Brancusi, who lacked a dealer of his own, as his unofficial agents and intermediaries in the United States. Bringing together over 80 sculptures, objects, photographs, films, and drawings from an international array of public and private collections, as well as a selection of rare archival documents, Brancusi & Duchamp: The Art of Dialogue is the first of its kind in any American museum or gallery.

Exhibition highlights include: one lifetime Brancusi sculpture and four posthumous casts in polished bronze, numerous vintage photographic prints by the sculptor of some of his most iconic creations, and several of Duchamp’s celebrated readymades, such as In Advance of the Broken Arm (1915/1964), With Hidden Noise (1916/1964), and L.H.O.O.Q. (1919/1964). Other Duchamp artworks featured in the exhibition include his early fauvist painting Nude with Black Stockings (1910), Rotoreliefs (Optical Disks) (1935), the Box in a Valise (1935–41), Female Fig Leaf (1950/1951), and his chess treatise Opposition and Sister Squares Are Reconciled (1932), the cover of which he designed in collaboration with Brancusi. Also on view are several artworks by Brancusi that belonged to Duchamp’s wife, Alexina, who was his friend and an admirer.

The exhibition will be accompanied by a fully illustrated catalogue written by Paul B. Franklin.