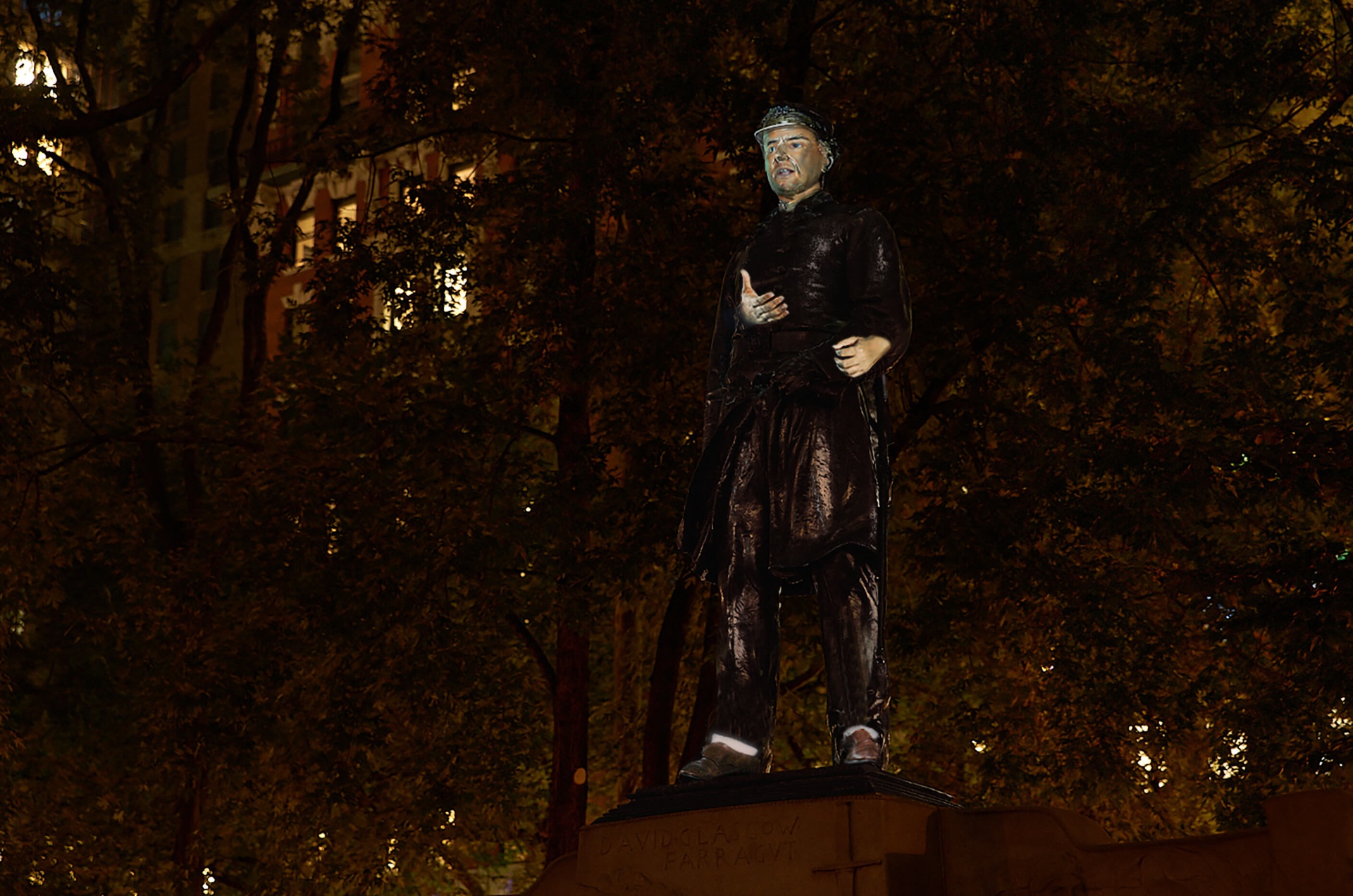 For Madison Square Park Conservancy’s 39th commissioned exhibition, artist Krzysztof Wodiczko will realize a new, site-specific public art installation that renders in high relief the diverse plights and journeys of refugees today. Building on a practice that has created platforms for marginalized voices, Monument will project the likenesses and spoken narratives of resettled refugees onto the Park’s 1881 monument to Admiral David Glasgow Farragut. A looping video projection will bring the monument to life with stories of displacement that illuminate how war, conflict, and political fallout impact individuals globally and encourage visitors to consider how history is memorialized. On view January 16 through May 10, 2020, and running from dusk to 9 p.m. Monday to Saturday, the installation will be complemented by a series of public programs, lectures, and events that expand upon the concepts explored within the work.

Born in 1943 in Warsaw, Poland, and based in New York and Cambridge, Wodiczko is recognized internationally for his video installations that activate architecture, monuments and public space, calling into question our assumptions of their role in society and creating forums for challenging discussions. Combining video projection with sound and motion, he disrupts public facades to grapple with topics like trauma, alienation, and survival, and amplify voices that have been disregarded or forgotten.

“In Monument, Krzysztof Wodiczko creates an acute platform for collective experiences of global migration and refugee resettlement as seen through a series of individual narratives,” said Brooke Kamin Rapaport, Deputy Director and Martin Friedman Chief Curator of Madison Square Park Conservancy. “Sited upon one of the most significant monuments in the Park and, indeed, New York City, the project builds upon controversies regarding the role of monuments and whose histories they can and should commemorate.”

To realize this ambitious new commission, Wodiczko and the Conservancy partnered with Refugee Council USA (RCUSA), a coalition of humanitarian organizations including the International Rescue Committee, and Integrated Refugee & Immigrant Services (IRIS). Both RCUSA and IRIS worked with the Conservancy to invite individuals to share their personal journeys. In advance of being filmed, each participant had opportunities to speak and meet with the artist to discuss their experiences and learn more about the project. Connecting through conversation is integral to Wodiczko’s practice, as he seeks to immerse himself in the circumstances unique to each person while developing the work. The final 30-minute loop will weave together harrowing accounts of flight between countries, relocation to refugee camps, and periods of trauma caused by political upheaval and civil wars with stories of resilience, perseverance, and hope. Projected on a monument to an American Civil War hero, Wodiczko’s work invites the public to consider America’s long-term role in refugee support and provides an opportunity for audiences to confront and comprehend the international implications of these realities.

“It has been gratifying to work with Krzysztof Wodiczko, together with the support of the Refugee Council USA, in the realization of Monument at the Park. We would like to thank in particular those individuals who shared their experiences and collaborated in the creation of a work that relays stories with both historic and current significance,” added the Conservancy’s Executive Director Keats Myer.

Krzysztof Wodiczko is a visual artist who works in photography and video and is an art theoretician. He currently heads the Interrogative Design Group, and is Professor in Residence of Art, Design and the Public Domain, Graduate School of Design, Harvard University.

Over his 50-plus year career, he has exhibited his work at major international venues including the Bienal de São Paulo (1965, 1967, 1985); the Venice Biennale (1986, 1999); the Whitney Biennial (2000); the Yokohama Triennale (2001); and the International Center for Photography Triennial (2003). Previous projects include an installation projecting the stories of Hiroshima bombing survivors onto the Atomic Bomb Dome at the Hiroshima Peace Memorial Park, and those of Vietnam and Iraq war veterans onto a statue of Abraham Lincoln in New York’s Union Square. Most recently, Wodiczko created Loro (Them), which debuted in Milan in June 2019 and featured drones with LED screens projecting images and voices of Milan’s growing immigrant population over the city center.

Wodiczko received the Hiroshima Art Prize in 1999 for his contribution as an artist to world peace, and the 2004 College Art Association Award for Distinguished Body of Work. He received an MFA from the Academy of Fine Arts in Warsaw in 1968.

Wodiczko was born in Warsaw in 1943 during the Warsaw Ghetto Uprising, a campaign of resistance against Nazi Germany during German-occupied Poland in World War II. He immigrated to Canada in 1977 and established residency in New York City in 1983. He lives and works in New York City; Cambridge, Massachusetts; and Warsaw, Poland. He is represented by Galerie Lelong & Co. in New York City.

About the Farragut Monument

Considered among the most historically significant sculptures in New York City, the monument to Admiral David Glasgow Farragut was realized through the collaboration of the Irish-born American Renaissance sculptor Augustus Saint-Gaudens, who made the bronze statue, and Beaux-Arts architect Stanford White, who developed the pedestal. Dedicated and installed in the Park in 1881, the monument depicts Farragut standing on a ship’s prow, in his naval uniform, in homage to his historic victory of Confederate forces at the 1864 Battle of Mobile Bay, Alabama.

Monument is being activated throughout its run with a range of artist conversations and special events. For more information and an up-to-date listing of events, please visit madisonsquarepark.org/mad-sq-art. All events are free and open to the public.

In partnership with PEN America, the Conservancy invites the public to consider the question “What does it mean to be a refugee?” From January 23 through 25, visitors will be invited to contribute their thoughts to the board.

Artist Krzysztof Wodiczko speaks about his creative practice and the issues at the fore of his commission in the Park with writer and critic Aruna D’Souza. The talk will be introduced by Chief Curator Brooke Kamin Rapaport.

This conversation brings together artist Krzysztof Wodiczko, former Director of the Office of Refugee Resettlement under President Obama Bob Carey, writer and reporter Robin Shulman, along with two Monument participants in a discussion about how art can have an impact on public opinion and policy. The conversation will be moderated by Chief Curator Brooke Kamin Rapaport.

Following a viewing of Monument, members of the public are invited to share their personal experiences and perspectives on immigration, refugees, and asylum seekers. Speakers can sign up onsite and will have 3 minutes each to present.

Madison Square Park Conservancy is collaborating with PEN America for its annual World Voices Festival, welcoming distinguished artists as they recite the work of award-winning authors and written excerpts about the journeys of resettled refugees, including: Hannah Arendt’s We Refugees (1943), Michael Chabon’s The Amazing Adventures of Kavalier and Clay (2000), Dave Eggers’ The What is the What (2006), Dinaw Mengestu’s The Beautiful Things That Heaven Bears (2007), and Khaled Hosseini’s The Kite Runner (2014).

Madison Square Park Conservancy hosts a screening of the film Midnight Traveler around the Reflecting Pool. Released in 2019, director Hassan Fazili’s documentary film follows his flee from Afghanistan once the Taliban puts a bounty on his life.

Madison Square Park Conservancy cultivates and enlivens Madison Square Park, a dynamic seven-acre public park in New York City’s Flatiron District and one of the city’s most treasured greenspaces. Through its public art commissions, horticultural stewardship, and engaging programming, the nonprofit creates an urban oasis that welcomes a diverse community of over 60,000 visitors each day.

Since 2004, the Conservancy has become a leader in commissioning new works of public art, curating and presenting over 35 major site-specific installations and solo exhibitions through its Mad. Sq. Art programming. Led by Brooke Kamin Rapaport, Deputy Director and Martin Friedman Chief Curator, the program invites leading artists to push the boundaries of their practice and create risk-taking new works that experiment with materiality, scale, and theme in response to the Park’s unique environment. The ambition of the commissioning program expands each year alongside the diverse range of innovative artists including Diana Al-Hadid, Tony Cragg, Leonardo Drew, Iván Navarro, Martin Puryear, Arlene Shechet, and Ursula von Rydingsvard.

The Conservancy is serving as the commissioning institution for the 2019 U.S. Pavilion at the Venice Biennale, marking the first time that an organization whose visual art program focuses exclusively on public art has received this honor. With Rapaport serving as Commissioner, the Conservancy is presenting new work by Martin Puryear.