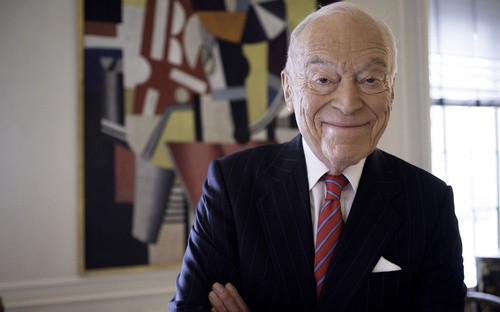 In the 1990s, Mr. Lauder decided that his collection should become part of a public institution and be supported with ongoing research and programming that would make the works continually relevant. The donation to the Met extends Mr. Lauder’s philanthropic vision of making gifts to museums that strategically build their collections. He has long served as a trustee, President, and Chairman of the Whitney Museum of American Art, to which he has donated hundreds of works of art, including masterpieces by Jasper Johns, Roy Lichtenstein, Claes Oldenburg, Cy Twombly, and Andy Warhol. In 2002 he spearheaded the donation from a group of 11 Whitney trustees of 86 modern and contemporary works selected to build specific areas of its collection. In 2008 he contributed $131 million to the Whitney’s endowment to help ensure its long-term sustainability.

Mr. Lauder has long been involved with the Metropolitan Museum and has served as a member of its Visiting Committees for Drawings & Prints and Modern & Contemporary Art since the 1980s. In 1984 he gave his collection of American Art Posters of the 1890s to the Met, which presented them in an exhibition in 1987 accompanied by a major catalogue that continues to be the standard reference in the field. Since that time, Mr. Lauder has continued to acquire works for the collection.

Mr. Lauder, one of the nation’s leading philanthropists, has also been a major supporter of Memorial Sloan-Kettering Cancer Center, University of Pennsylvania, Breast Cancer Research Foundation (BCRF), the Alzheimer Drug Discovery Foundation (ADDF), the Hospital for Special Surgery, and Adventure Playgrounds in Central Park, among hundreds of other cultural, educational, social service, and civic organizations.

Thomas P. Campbell, Director and CEO of The Metropolitan Museum of Art, announced today that Leonard A. Lauder has pledged to give the Museum his collection of 78 works by Pablo Picasso, Georges Braque, Juan Gris, and Fernand Léger, which stands as …
Read more
Tags
Press Release
Leonard Lauder
Visual Arts
Philanthropists & Foundations

A Billion-Dollar Gift Gives the Met a New Perspective (Cubist)