Majolica Mania: Transatlantic Pottery in England and the United States, 1850—1915 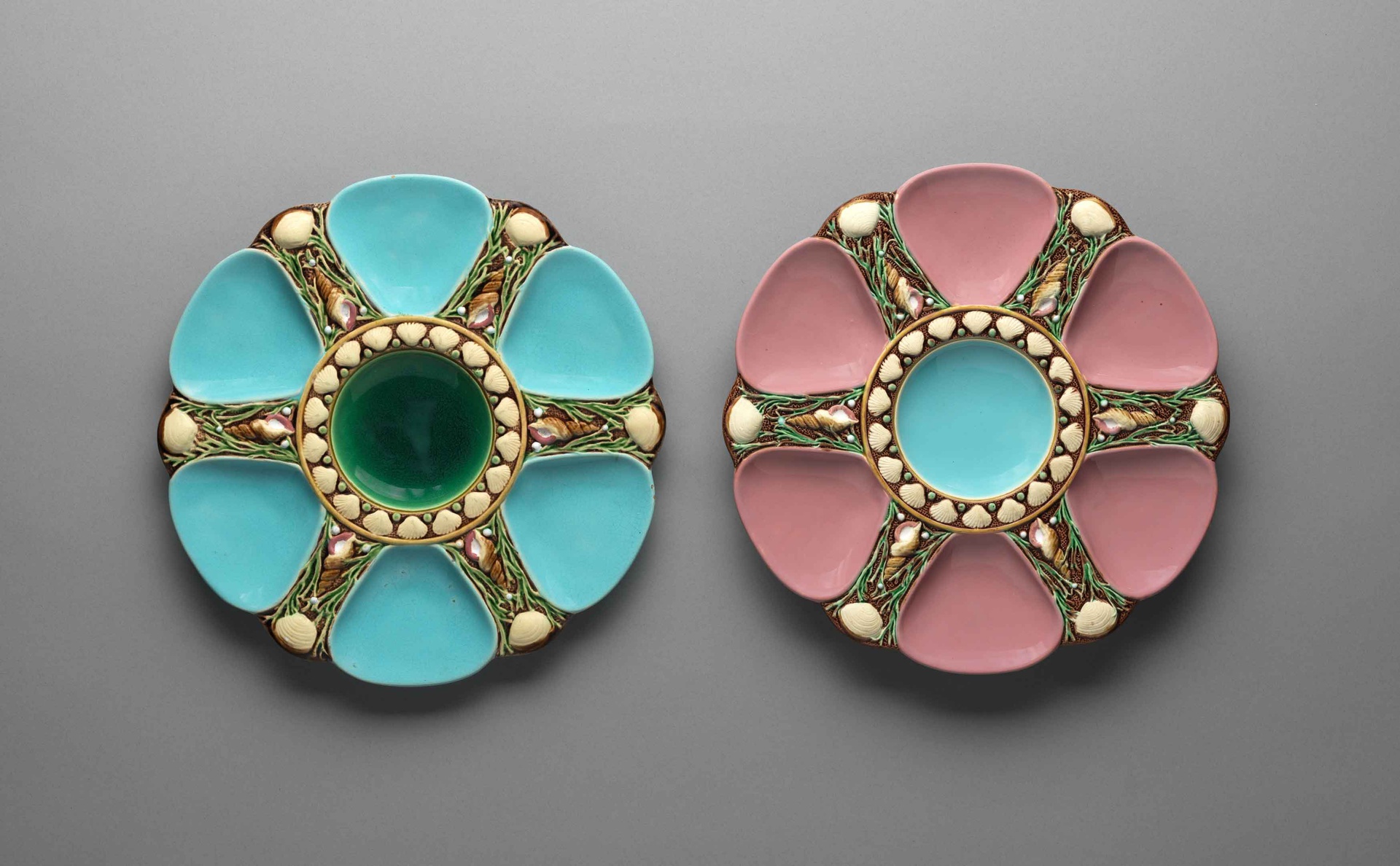 Majolica Mania: Transatlantic Pottery in England and the United States, 1850–1915 is the largest and most comprehensive exhibition yet mounted of a significant nineteenth-century innovation in ceramics. Inspired by Italian Renaissance majolica and French Palissy ware, “majolica” debuted at London’s Great Exhibition of 1851 and was an immediate sensation. This molded earthenware capitalized on new production techniques and brightly colored lead-based glazes and allowed for a diversity of forms, from historical to practical to whimsical. Tableware, decorative objects, and garden ornaments reflected nineteenth-century fashions and new culinary practices.Majolica became accessible to and popular across all classes of society on both sides of the Atlantic. It was an immensely successful answer to what good industrial design could and should look like—a highly debated topic in this time period.

“The exhibition,” said Weber, “is the culmination of an international research project undertaken over several years that continues BGC’s tradition of identifying under-recognized and undervalued areas of scholarship within nineteenth-century decorative arts. In particular, the Majolica Mania exhibition and its accompanying three-volume catalogue, subtitled Transatlantic Pottery in England and the United States, 1850–1915, reflect new research that focuses on the deeply entwined relationship between the ceramics industry in England, where majolica was first produced, and that of the United States, where many British potters ultimately settled. The experience of these craftspeople was essential to the growth of the American ceramics industry, and after their arrival, potteries in New York, Pennsylvania, Ohio, New Jersey, and Maryland thrived.”

“The story of majolica is the story of people: reformers, designers, scientists, pottery workers, retailers, users, and collectors,” said Julia Marciari-Alexander, Andrea B. and John H. Laporte Director of the Walters Art Museum. “Majolica presents a kaleidoscopic view of Victorian interests, expressed through its array of source materials—from art of the ancient world, Asia, the Gothic and Renaissance, as well as from nature. In this way, this exhibition creates particular resonances with the Walters Art Museum’s encyclopedic collections and with the city of Baltimore. The exhibition continues the mission of the Walters to bring art and people together by grounding the history of art in personal stories.”

The exhibition features many of the finest examples of English and American majolica, including several important loans from museums in Great Britain, including the Royal Collection, Victoria and Albert Museum, and Potteries Museum & Art Gallery in Stoke-on-Trent; from the Maryland Historical Society and Philadelphia Museum of Art in the United States; and from private collections. Many of the objects in the exhibition have never before been on public display.

“Although majolica is not typically seen in museum collections, largely because it was regarded as ‘bad’ design in the mid-twentieth century and subsequently de-accessioned, through a reconsideration of this important ceramic, we can learn something new about both the Victorian era and our own. This exhibition and publication will bring majolica back into the conversation,” said Briggs.

Majolica Mania: Transatlantic Pottery in England and the United States, 1850–1915 includes approximately 350 objects diverse in scale, form, and function, that showcase the work of major manufacturers and designers from English potteries including Minton, Wedgwood, George Jones, and others, as well as leading American firms such as the Griffen, Smith & Hill Company of Pennsylvania; the Arsenal Pottery of Trenton, New Jersey; and the Chesapeake Pottery of Baltimore, Maryland. Important themes of the exhibition include the introduction of majolica by Minton; design sources, including historical styles, Asian art, and the natural world; the significance of horticulture and conservatories in the Victorian home; new foods and fashions for the table; major producers of majolica in England and the United States; and the decline of majolica in the early twentieth century resulting from changes in taste and reforms to limit the use of lead in the workplace.

The Introduction of Majolica by Minton

Minton & Co. introduced majolica at London’s Great Exhibition of 1851. In 1849, Herbert Minton, the firm’s owner, hired Léon Arnoux, a French modeler, designer, decorator, and ceramic chemist who had worked at Sèvres, and tasked him with planning Minton’s display for the Great Exhibition. Arnoux drew on his knowledge of Renaissance ceramics to develop what came to be known as majolica, a new style of earthenware distinguished by the rich, saturated color of the lead-based glazes he created to decorate the boldly-modeled pottery. The innovations developed by Arnoux for Minton & Co. and later adopted by other manufacturers enabled them to efficiently mass produce the decorative molded earthenware at lower costs than porcelain, which was much more labor-intensive.

Minton recruited French and other European artists, including Albert-Ernest Carrier-Belleuse, Pierre-Émile Jeannest, Hugues Protât, Émile-Aubert Lessore, and Paul Comoléra, to create designs for majolica. The talent and skill of these artists contributed greatly to the firm’s success, as did its relationship with the British royal family. Minton majolica was used in the Royal Dairy at Windsor and throughout the South Kensington Museum (now the Victoria and Albert Museum), which are featured in a video presentation. The exhibition includes a watercolor design indicating the use of Minton architectural majolica in the Royal Dairy. Also on view are a majolica Maiden with Vase sculpture and a fountain originally designed and produced for the Royal Dairy and later reproduced for sale to the public.

Several key Minton pieces on view include a life-sized peacock designed by Paul Comoléra and made in 1876, a seven-foot-tall flower stand or jardinière exhibited at the 1855 Exposition Universelle in Paris on loan from the Potteries Museum, and a foxglove flower pot and stand designed around 1850, which is an example of the model displayed at London’s Great Exhibition of 1851 and New York’s Crystal Palace in 1853.

Majolica was quickly and widely embraced by the greater public. As the number of majolica producers proliferated in England, the decorative ware made its way into the homes of the nascent middle classes of England and the United States. Majolica designers found inspiration in a variety of European ceramic precedents like Palissy and Della Robbia, and in revival styles, especially Renaissance revival. Léon Arnoux, supported by Herbert Minton, encouraged factory artists such as Hamlet Bourne to use actual Renaissance objects as sources of inspiration and for copying. For example, the exhibition includes an 1858 ewer and stand that Hamlet Bourne modeled for Minton as a copy of a Renaissance original in the collection of the V&A.

Popular fascination with Asian art and design prompted majolica makers to seek new inspiration, especially from Japan. The exhibition features vases and planters that reveal this interest, such as the Aquarium flower pot designed by Christopher Dresser for Wedgwood in about 1872.

Scientists such as Thomas Henry Huxley and Charles Darwin excited interest in science and natural history throughout the nineteenth century. Darwin’s publications, Journal and Remarks (first published under this title in 1839, and subsequently known as The Voyage of the Beagle) and On the Origin of Species (1859) were widely read. Majolica makers found rich source material for their creations in the animal world, reflected in the exhibition by objects such as Minton’s Monkey Garden Seat, designed ca. 1855 and George Jones’s Tortoise spittoon, ca. 1873.

Conservatories in the Victorian Home

As exotic flora and fauna from across the Empire made their way to Britain, personal study of botany grew. This interest coincided with increasing affordability of materials such as glass and steel that supported construction of a growing number of conservatories in private homes, designed to showcase collections of tropical plants, ferns, and other botanical specimens. New conservatories provided a new site for home decoration, and majolica makers responded with a diverse array of jardinières, planters, vases, garden seats, and fountains that are well-represented in the exhibition.

New Foods and Fashions of the Table

Innovations in transportation as well as the advent of refrigeration and canning technology introduced new foods, culinary practices, and fashions to the nineteenth-century table. These developments spurred production of an array of specialized majolica tableware including asparagus cradles, berry servers, celery vases (such as Griffen, Smith & Hill’s Etruscan celery vase, ca. 1879–90, which will be on view), sardine boxes (such as the George Jones sardine box and stand, ca. 1875, also on view), and other objects.

The exhibition reflects the diverse output of leading English manufacturers of majolica, from 1851 through 1900. While Minton & Co. remained a significant force in the industry, the exhibition includes majolica by other leading English makers who started selling majolica in the 1860s, including Josiah Wedgwood & Sons; George Jones; Worcester Royal Porcelain Co.; T. C. Brown-Westhead, Moore & Co.; William Brownfield; and W. T. Copeland & Sons; as well as other manufacturers, like Adams & Bromley and Wardle & Co., who exported their more popularly priced majolica to the growing U.S. market beginning in the 1870s and 1880s.

Major Producers in the United States

As British potters and craftspeople immigrated to the U.S., they contributed their knowledge and skill to the growing American pottery industry. James Carr was one of the first emigrants to produce majolica in the U.S. at his New York City Pottery. Joseph S. Mayer was another British emigrant potter. His Arsenal Pottery was active throughout the 1880s and early 1890s in Trenton, New Jersey, one of the most important centers of American ceramics manufacture. Mayer was a low-cost, high-volume producer of jugs and other majolicaware.

Baltimore was also home to two American majolica makers: D.F. Haynes & Company’s Chesapeake Pottery and Edwin Bennett Pottery. Objects in the exhibition made by these manufacturers include a large fern stand with griffin support by Edwin Bennett Pottery, shown at the 1893 Chicago World’s Fair. Griffen, Smith & Hill, one of the best and largest American majolica manufacturers, is represented in the exhibition by an extensive range of patterns and forms, including the firm’s popular “Shell” ware (1879–1890). Other American producers included in the exhibition are George Morley of East Liverpool, Ohio and the Peekskill Pottery Works in New York’s Hudson Valley.

Decline of Majolica and Workplace Reforms

Awareness of the occupational dangers of working in the majolica industry spread in the late nineteenth century. The potteries were fired with coal, and throwing, turning, pressing, and casting the ware created a dusty environment. Laborers in the industry regularly inhaled smoke and dust. Women accounted for 40% of the workforce in English potteries, performing tasks that often required the most substantial exposure to lead, such as painting on majolica glazes. Starting in 1896, English doctors were required to report cases of lead poisoning for the first time. The damning statistics revealed that potters suffered from lead poisoning more frequently than workers in any other trade. Workplace reforms to reduce exposure to lead soon followed in the early twentieth century. These regulations coincided with changes in taste, and ultimately, production of majolica came to an end.

Majolica Mania includes a ceramic memorial by contemporary artist Walter McConnell commissioned by Bard Graduate Center and the Walters Art Museum that honors the many workers in the majolica industry, especially women, who ultimately became sick or died as a result of working with toxic lead-based glazes and other hazardous materials.

Majolica Mania: Transatlantic Pottery in England and the United States, 1850—1915