Person of the Crowd: The Contemporary Art of Flânerie features works by more than 40 artists in the Barnes Foundation’s Roberts Gallery, in street interventions throughout Philadelphia, and on the web. 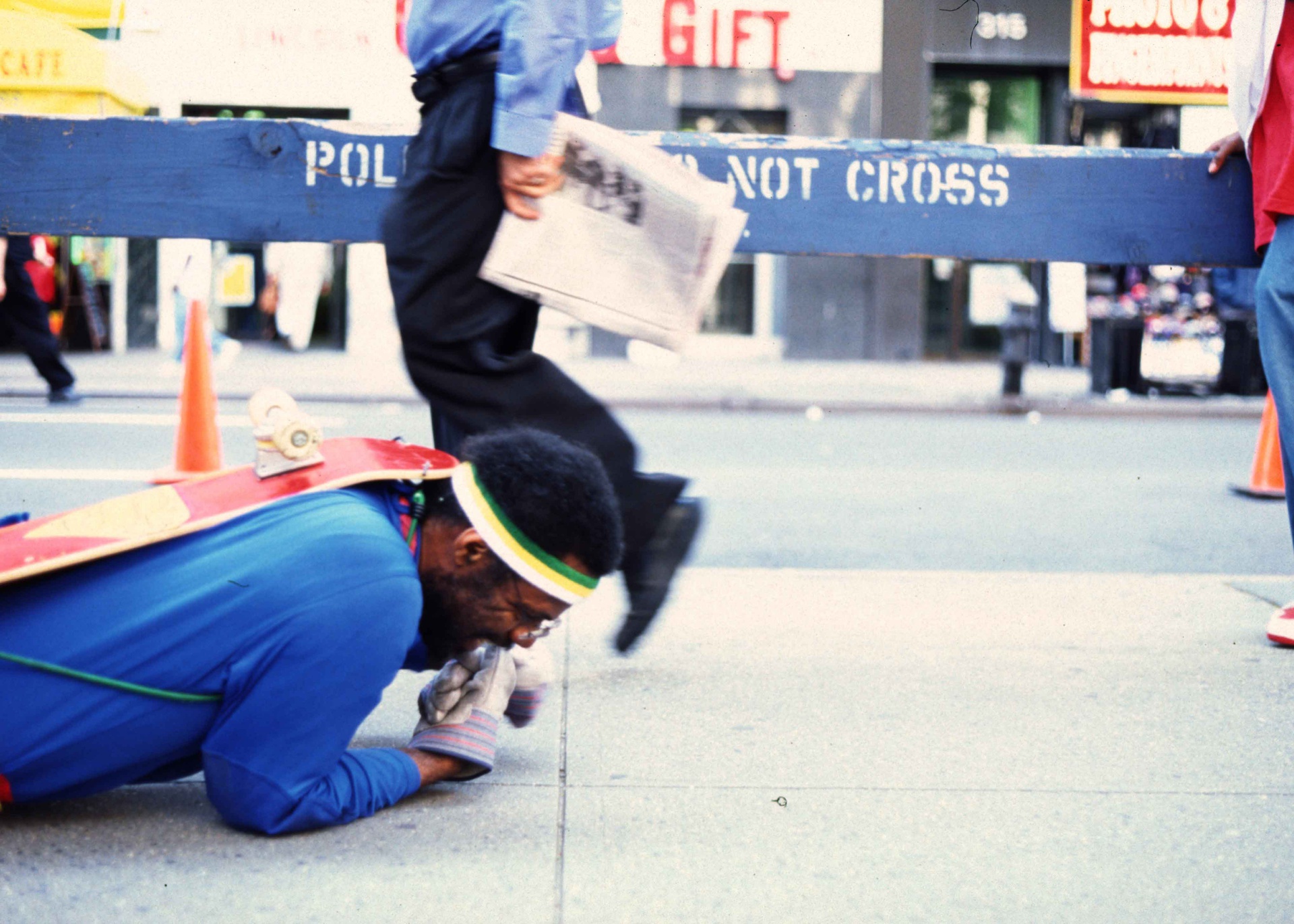 Person of the Crowd: The Contemporary Art of Flânerie features works by more than 40 artists in the Barnes Foundation’s Roberts Gallery, in street interventions throughout Philadelphia, and on the web.

In February 2017, the Barnes Foundation will present Person of the Crowd: The Contemporary Art of Flânerie, an exhibition featuring the work of 50 U.S. and international artists who have taken to the street throughout the post-war period to speak to issues as diverse as gentrification, gender politics, globalization, racism, and homelessness. Person of the Crowd, on view February 25 through May 22, 2017, features works, new performances, and documentation of historical performance pieces by Marina Abramović, Vito Acconci, Eleanor Antin, Constant, David Hammons, and Zhang Huan, among many others.

Major support for Person of the Crowd: The Contemporary Art of Flânerie has been provided by The Pew Center for Arts & Heritage, with additional support from Comcast NBCUniversal, the individual contributors to the Barnes Foundation Exhibition Fund, the Jill and Sheldon Bonovitz Exhibition Fund, the Horace W. Goldsmith Foundation, and the Dolfinger-McMahon Foundation.

While much of the exhibition will be presented in the Barnes Foundation’s Roberts Gallery, Person of the Crowd will also reach into the city of Philadelphia. A series of performances—by artists including Sanford Biggers, Tania Bruguera, Ayana Evans, Zachary Fabri, and Wilmer Wilson—will take place on the streets of Philadelphia, and billboard and street poster projects will activate the city throughout the exhibition run.

The Barnes has also commissioned New York-based artist Man Bartlett to create a microsite and digital artwork exploring themes related to the exhibition and the concept of “cyberflânerie.” Bartlett will act as a flâneur by documenting the street performances taking place throughout the run of the exhibition and inviting the general public to step into the position of the flâneur and share their perceptions of everyday urban life via social media using the hashtag #Personofthecrowd. He will also work with teens in the Philadelphia region to develop videos documenting their own experiences as flâneurs inspired by their engagement in the public spaces of the city.

Bartlett will weave together this rich digital content—his documentation of the performances, the public’s social media posts as interpreted by a custom-built machine learning application, and Philadelphia students’ videos—to create the final piece which will live on a microsite and will be projected inside the Barnes Foundation’s Annenberg Court.

In 1840, Edgar Allan Poe published his seminal short story “The Man of the Crowd,” in which he introduced a character type that would become a familiar plot device of 19th century literature: the flâneur (“stroller”). This figure takes to the streets—of London, in the case of Poe’s protagonist—wandering far and wide with no fixed itinerary, and gathers clues to the nature of modern experience by observing the physical fabric of the burgeoning industrial city, its inhabitants and their public activities.

Two decades later, poet and critic Charles Baudelaire recognized flânerie as the powerful engine of a new art movement in Paris and, inspired by Poe’s man of the crowd, promoted it in his landmark 1863 essay “The Painter of Modern Life,” which heralded the arrival of the quintessential artist-flâneurs—the French impressionists. The city as observed in the pursuit of flânerie and understood as the most telling face of modernity remained a central subject for socially engaged artists well into the twentieth century. It is also a characteristic subject of the American Ashcan School, German expressionism, French surrealism and American social realism.

The advent of abstract expressionism in the United States in the late 1940s, with its emphasis on the representation of subjective, psychological states—the inner world of the artist as opposed to the external world—threatened to displace contemporary social life from progressive visual art. In the late 1950s and early 1960s, however, a few influential artists like Arman, Stanley Brouwn, Constant, Guy Debord, Allan Kaprow, George Maciunas, Robert Rauschenberg, Carolee Schneemann and Jacques Villeglé battled this erasure by appropriating and reinventing flânerie to a wide range of critical and expressive ends.

“The trend continues to this day,” said Thom Collins, executive director and president of the Barnes Foundation and curator of the exhibition, “as flânerie has been embraced again and again as a productive strategy by artists who have taken to the streets, working in the way first described by Poe and codified by Baudelaire: they have joined the crowded streets of cities throughout the world to heighten their connection to the vital urban social fabric as a stimulus to the production of novel art about the nature of contemporary experience.”

Marina Abramović, Role Exchange (1975/1994), (gelatin silver prints): Invited to perform at Amsterdam’s De Appel Gallery in 1975, pioneering body artist Marina Abramović exchanged roles for four hours with a prostitute from the city’s notorious red light district. Extending her series of challenging, endurance-oriented performances, Role Exchange considers the infrequently discussed connection between artistic modernism and prostitution: the historical role of female prostitutes as artist models and prostitution in burgeoning metropolises as a favorite subject of the French impressionists in the second half of the nineteenth century.

Vito Acconci, Documentation from Following Piece (1969/2008), (inkjet print): Trained as a writer, Vito Acconci was likely aware of Edgar Allan Poe’s “The Man of the Crowd” when he undertook his Following Piece of 1969. Each day for one month he selected a passerby on a New York City street at random and followed that person everywhere s/he went until s/he entered a private space to which the artist had no access. Often lasting for several hours, these performances were documented with a time coded diary and photographed by assistant Betsy Jackson. A meditation on the boundaries of public and private realms in the urban environment, the piece also remains as a document of one particularly interesting, transitional moment in the life of the city.

Eleanor Antin, Portrait of the King (from the King of Solana Beach) (1972) and The Wonder of it All (From the series The King of Solana Beach) (1974-75), (gelatin silver prints): Artist and filmmaker Eleanor Antin is best known for elaborate masquerades in which she costumes herself and performs as fictional heroes whose biographies illuminate complex moments in cultural history. Responding to plans by a real estate developer to displace a local population of hippies and entrenched retirees from the coastal California town of Solana Beach, she created a monarch for the locals to help rally them against the forces that threatened to force them out. Performing as the King of Solana Beach, Antin actually took to the streets for more than a year, listening to the locals’ stories, offering them advice and attempting to rally them to defend themselves against encroaching gentrification.

Constant, OriëntSector (1959), (metal, ink on Perspex and oil paint on wood): Motivated by the utopian notion that World War II had ushered in a new era in which the automation of all production would bring about a stable, classless society, Dutch artist Constant began a two-decade-long project to devise an appropriately progressive architecture and urban planning practice. He concentrated on the idea that the end of accustomed labor would lead to the evolution of communities focused instead on imagination, creative expression and the celebration of new opportunities for non-hierarchical social contact and exchange. Constant set about devising spaces to accommodate and even catalyze this activity. Working with the existing plans of cities in The Netherlands that he knew first hand as a pedestrian—Amsterdam, Rotterdam, The Hague—and inspired by the situationist concept of dérive—literally “drift,” a kind of aimless but inspiring form of wandering through city spaces—he proposed vast overlays of meandering, elevated walkways and open and enclosed plazas over the existing urban fabric as a means of promoting unpredictable but stimulating encounters among people and between people and the built environment.

David Hammons, Untitled (Speakers) (1986), (acoustic speakers, bottle caps, wire): The sculpture and installation art of David Hammons speaks in poetic and provocative ways to aspects of African American cultural history and contemporary black experience. He builds his pieces from things scavenged on the streets of New York City, bringing together disparate materials to produce allusive abstractions. Here a pair of found stereo speakers have been decorated with bottle caps—applied to their surfaces in a pattern reminiscent of African textiles and strung on wires to suggest long dreadlocks—to create a symbolic form celebrating the central role of black musicians in the evolution of western music.

Zhang Huan, My New York (2002), (digital video): My New York, performed by Chinese artist Zhang Huan in New York City in the wake of the terrorist attacks on the World Trade Center, offers a more positive and comforting vision of community in his adopted hometown. Transformed by his costume made of raw meat into a visual metaphor for the city itself—flayed but still enormously powerful—he engaged random pedestrians during a walk through the Upper East Side of Manhattan in a performative meditation on the fundamental social dynamic—an exchange between two people—and its role in promoting healing and social stability.Symposium “Flânerie and the Politics of Public Space”

Taking place April 15, 2017, this interdisciplinary symposium connects flânerie as a strategy for contemporary artists to its origins in the 19th century. Speakers will discuss the politics of public space—including cyberspace and social media, where the practice of flânerie transcends physical and geographical boundaries. Participants include artists Man Bartlett and Angela Washko, writer Doreen St. Félix, and art historians André Dombrowski, Janet Wolff, and Tom McDonough.

Person of the Crowd: The Contemporary Art of Flânerie is curated by Thom Collins, executive director and president of the Barnes Foundation in collaboration with Dr. Martha Lucy, deputy director for education & public programs and curator, as well as exhibition guest curator Judith Tannenbaum, who will collaborate on the performance series and billboard installations.

Major support for Person of the Crowd: The Contemporary Art of Flânerie has been provided by The Pew Center for Arts and Heritage, with additional support from Comcast NBCUniversal.