Select Pre-Columbian Antiquities, Modern and Contemporary Work Also on View; VR Tour of Exhibition Invites Public from Around the World to Explore Each Masterwork in Detail within Each Venue 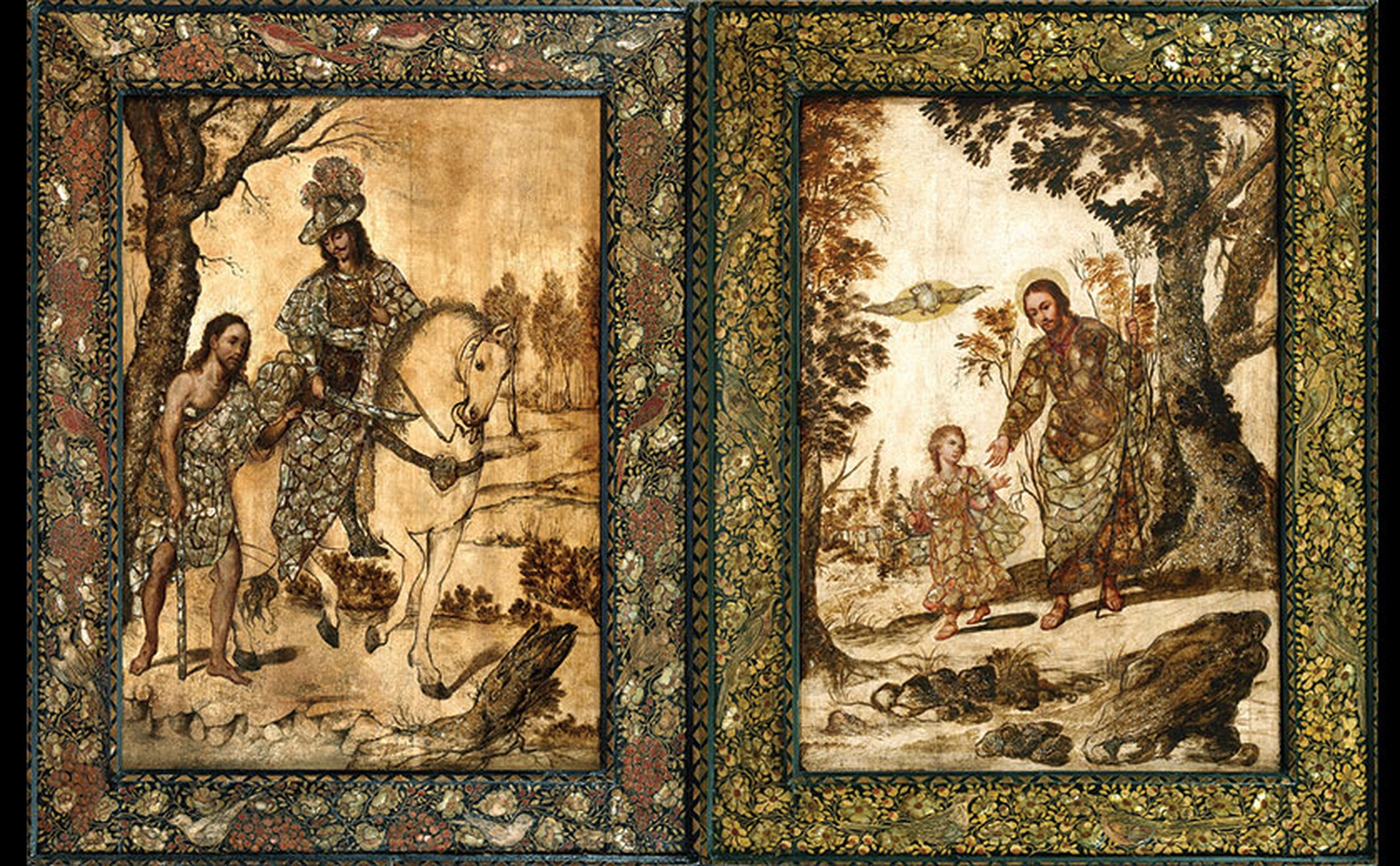 Select Pre-Columbian Antiquities, Modern and Contemporary Work Also on View; VR Tour of Exhibition Invites Public from Around the World to Explore Each Masterwork in Detail within Each Venue

This summer, Colnaghi gallery presents a major survey of Latin American art from the Viceregal period, assembled in collaboration with Jaime Eguiguren, the world’s preeminent expert on viceregal art. Marking the first commercial exhibition of this scale ever to be staged, Discovering Viceregal Latin American Treasures brings together more than 100 paintings, sculptures, textiles, and objects from the 17th to 18th centuries, with select Pre-Columbian and Modern masterpieces, reflecting Colnaghi's commitment to supporting cross-category collecting. The exhibition will be on view simultaneously at Colnaghi’s galleries in London and New York, from 2 July through 10 September, 2021. It also will be presented online in virtual reality tours starting in July, allowing the public from around the world to examine the works in detail in both locations.

As the Spanish began colonising Latin America in the early 16th Century, art became a powerful tool for the Catholic Church. At first, sculptures and paintings were imported from Spain, but from the mid-16th century onward, the Church set up guilds and workshops to train a local base of indigenous artisans. The Old Master works on view come out of these workshops, which created some of the most important artistic genres in Latin American art.

The exhibition also features historically significant examples of stone sculptures, reliefs, and objects from the Pre-Columbian period, encompassing the art of indigenous people of North, Central, and South America and the Caribbean created prior to the arrival of the Spanish and providing a sort of precendent for the viceregal work. Likewise, modern and contemporary paintings by Spanish and Latin American artists that are on view extend the timeline forward to showcase the rich visual culture of Spanish speaking countries today. The exhibition features works by Brazilian Modernist Alfredo Volpi, Chilean Abstract Expressionist and Surrealist Roberto Matta, and Spanish Surrealist Oscar Dominguez, among other modern masters, many of whom have championed their own pre-Hispanic heritage and local cultures through their work. Some studied in Europe and returned to Latin America during the first two decades of the twentieth century, advocating the creation of a uniquely Latin American art.

"I am delighted to be collaborating with Jaime Eguiguren on this global exhibition, which not only will be the first-ever, large-scale gallery exhibition of viceregal art, but also will be among the largest surveys of Latin American Art from across the ages," said Jorge Coll, Colnaghi’s joint CEO. "The viceregal focus responds to the growing market interest in the unique and rare works from this era, following a major recent museum exhibition and notable sales achieved in the past year. With these wonderful presentations at our galleries, we are excited to introduce those unfamiliar with the art from this region to something highly original.’’

Added co-CEO Victoria Golembiovskaya, "Colnaghi is one of the few commercial galleries presenting works from antiquity to the modern era. This exhibition creates exciting opportunities for new discourse and for cross-collecting, providing collectors, art lovers and scholars alike with a rare opportunity to learn more not only about the Viceregal period, but also about the art that has emanated from the region over the course of the centuries."

Exhibition highlights from the ancient period include a serene Jalisco wrestler from the Proto-Classic Period (c. 100 B.C.-A.D. 250). Jalisco is one of the western Mexico states (Colima-Nayarit-Jalisco), and its sculpture is noted for a hieratic style with stiff postures and staring eyes. This figure is a classic image of the ideal Jalisco male.

Within the Old Masters group, highlights include works from the Escuela Quiteña (Quito School of Art), which is considered one of the most influential schools of art in Latin America. A sculpture of The Archangel Michael Defeating the Devil (c. 1750) exemplifies the unique style and characteristics of this important artistic period.

An important piece both in material and artistic technique is the exquisite pair of oil and mother-of-pearl portraits depicting Saint Martin on Horseback and Saint Joseph and the Infant Jesus, Mexico (c. 1690) by Juan and Miguel González. Hailing from Mexico City, the artists González were celebrated at the time as “makie and inlay painters” due to their masterful use of mother-of-pearl, and their portraits in this exhibition epitomize that prodigious technique.

Another exhibition highlight is the beautiful oil on copper Portrait of Sor Juana Ines de la Cruz at the age of 25 by an anonymous artist. Its rich colours portray a young woman’s face looking out from beneath a dark headdress, gently holding an icon of the Virgin Mary. This previously unpublished portrait stands as the only known preserved work painted of the poet Sor Juana during her lifetime. This painting is likely the piece to which considerable research and theories about Sor Juana have alluded in the search of the real face of this most celebrated representative of New Spanish literature.

Within the exhibition's presentation of modern and contemporary pieces is a masterwork by Spanish Surrealist Oscar Dominguez, Les Deux Voyantes (1945). The painting depicts two clairvoyants examining a crystal ball against a webbed background of intense blue, seemingly oblivious to the viewer. The polygonal webbing collapses the space between the figures, themselves composed of geometric shapes, and the patchwork of dramatic blue backdrop, creating a juxtaposition and illogicality characteristic of post-war Surrealism.

The exhibition will be accompanied by a comprehensive illustrated catalogue as well as an online viewing room, enabling international audiences to explore the works on view.

Founded in 1760, Colnaghi is one of the oldest commercial art galleries in the world and one of the few to specialise in works of art from antiquity to the present day. Since the late nineteenth century, Colnaghi has been a leading dealership in Old Master paintings, prints, and drawings, selling masterpieces to the greatest collectors and museums of the Gilded Age. With galleries today in London, New York, and Madrid, Colnaghi presents rare objects from the Ancient World, the finest Old Masters, and Modern masterpieces, providing its clients with expert advice and opportunities to cross-collect across centuries and media.

Colnaghi is directed by co-CEO and owner Jorge Coll and Victoria Golembiovskaya. Carlos A. Picón, longtime curator of Greek and Roman art at the Metropolitan Museum of Art, oversees Colnaghi New York.

Founded by Jaime Eguiguren in 1998 in Buenos Aires, Argentina, Jaime Eguiguren Art & Antiques specialises in Spanish and Italian Old Masters paintings, works of art, antique silver, and Hispanic American art. Such treasures, due to their exceptional quality, mostly have been acquired by museums such as the Metropolitan Museum of Art, LACMA, the Detroit Institute of Arts Museum, and the Louvre Museum, among others.

Jaime Eguiguren has been participating in the leading international art fair TEFAF Maastricht since 2001, as well as TEFAF New York since its inauguration in 2016. Over the last few years, Jaime Eguiguren published 18 books written by renowned experts in each specialty, thus contributing to the diffusion of the art market and giving absolute solidity to the attributions of the works it offers.

There has been a recent growth in market demand for Hispanic American art, from both many major institutions and distinguished private collectors worldwide. In the past few years, under the management of the Director of Hispanic American art Gonzalo Eguiguren, the gallery has become an important pattern in this field.