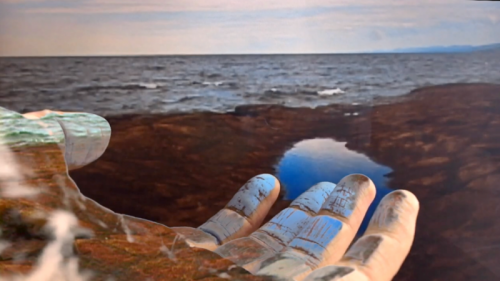 In May 2022, the Contemporary Arts Center (CAC) in Cincinnati will premiere Breaking Water, a group exhibition bringing together works in installation, video, photography, painting, sculpture, and performance that offer a range of approaches to the subject of water, liquidity, and feminism. The exhibition will debut four new commissions by Paul Maheke, Josèfa Ntjam, Claudia Peña Salinas, and a collaborative work by Calista Lyon and Carmen Winant alongside new and existing work by an international group of artists whose work explores themes of fluidity, connectivity, and resistance, and addresses timely concerns including water rights, climate change, and the effects of natural disasters. Co-curated by CAC Senior Curator Amara Antilla and independent curator and writer Clelia Coussonnet, Breaking Water will be on view at the CAC from May 6 through August 15, 2022. The exhibition will be accompanied by a parallel film screening program that extends the exhibition’s central themes.

“Breaking Water expands from conversations and ideas that Clelia and I began exploring with other artists and academics analyzing the subject of water and its many forms: a source of life, a weapon of destruction, a basic human need, and a primary element that connects us with each other and our environment,” said Amara Antilla, Senior Curator at the CAC. “The artists involved tell personal and poignant stories through their works that lead us to consider more resilient ways of relating and acting in the world.”

“In the past years, there has been a convergence of exhibitions and art events in relation to oceans, rivers and swamps, which demonstrate a rising concern and awareness of how much our futures depend on the balance and vitality of liquid environments—on the defense of their rights, and on a respectful and dynamic relationship with them,“ explained Clelia Coussonnet. "Breaking Water explores water as an agent of change and transformation, capable of eliciting new forms of action and knowledge production.”

Breaking Water considers the adaptable, transformative, resilient, and relentless nature of water and how these qualities manifest in both social dynamics and individual states of being. The exhibition gets its title from a new commissioned video installation by Calista Lyon and Carmen Winant composed of found material and new footage considering climate grief and the ways in which the act of “water breaking” during childbirth can serve as an allegory for personal and societal transformation and ultimately, shifts of consciousness. Additional site-specific commissions include: a video and sculptural installation by Claudia Peña Salinas that explores thematic lines of water and rain, indigenous knowledge and myth, and replication and authenticity; an installation by Paul Maheke that explores fluidity and protest; and a short film by Josèfa Ntjam, co-commissioned by the CAC and Palais de Tokyo, combining animation, collage, and 3D modeling to tell a story of characters with liquid bodies who subsume their individual identities to become part of one collective “persona.” Additional artists include: Martha Atienza, Marcos Ávila Forero, Cecilia Bengolea, Andrea Carlson, Carolina Caycedo, Jes Fan, Cleo Fariselli, Saodat Ismailova, Jaana Laakkonen, Vian Sora, and Nomeda and Gediminas Urbonas.

“From the range of featured artists to our partnerships on the commissions, film screenings, and publication, Breaking Water is a strong example of how the CAC seeks out collaboration nationally and internationally, bringing global perspectives to our local communities,” said Marcus Margerum, the CAC’s Interim Alice & Harris Weston Director. “Through art, we hope to inspire our audiences to think about our world in a new way, and this exhibition does just that: taking a subject that we’re all familiar with, water, and offering a variety of lenses through which to consider its qualities, importance, and potential.”

Breaking Water will be accompanied by a publication that will include essays by Antilla and Coussonnet, as well as newly commissioned texts on the artists by a group of writers, scholars, and curators that includes Diana Campbell (Brussels/Dhaka), Chandra Frank (Cincinnati/Amsterdam), Stefanie Hessler (Trondheim), Roxanne Ornelas (Miami, Ohio) and Mi Yu (Kassel). The publication will also feature a glossary of terms produced in collaboration with Singapore Art Museum (SAM) related to the exhibition’s themes and concerns, including: New Materialism; Hydrofeminism; Wet Ontologies; Liquid Ground; Chthulucene; Kinship; Leaky Bodies; Ecofeminism; Aquapelagic; Tidalectics; Archipelagic Thinking; Water Rights; Multispecies; Commons; and more.

The CAC will also partner with the Charles Phelps Taft Research Center at the University of Cincinnati to host a conversation about water, gender, sexuality, and race organized by Dr. Chandra Frank. The speakers will touch on themes related to climate justice, social movements, and possible futures. Additional details on Breaking Water and related programming will be announced in the coming months.

Funding for Breaking Water is provided by the Andy Warhol Foundation for the Visual Arts. Additional support is provided by the National Endowment for the Arts, and Étant donnés Contemporary Art, a program of FACE Foundation, developed in partnership with the Cultural Services of the French Embassy in the United States.

Amara Antilla is Senior Curator at the Contemporary Arts Center (CAC) in Cincinnati, where she is responsible for shaping the CAC’s robust exhibitions program. She has organized exhibitions and new commissions at the CAC with artists including Marwa Arsanios, Hellen Ascoli, Kahlil Robert Irving, Steffani Jemison, and Nora Turato. Previously, Antilla worked at the Guggenheim Museum in New York, where she contributed to various monographic exhibitions including V.S. Gaitonde: Painting as Process, Painting as Life (2014); Monir Shahroudy Farmanfarmaian: Infinite Possibility, Mirror Works and Drawings, 1974–2014 (2015); and Simone Leigh: Loophole of Retreat (2019). Antilla was also involved with the acquisition, research, and exhibition program of the MAP Global Art Initiative (2012-2018). Independently, Antilla has served as curatorial advisor for the Dhaka Art Summit (Bangladesh). Antilla studied art history at Tufts University; the Museum School; and Hunter College, City University of New York (CUNY).

The Contemporary Arts Center is a catalyst for dialogue and discovery, driven by the art, artists, and ideas of our time. Through our exhibitions, performances, educational and community programs and partnerships, the Contemporary Arts Center (CAC) provides opportunities for encounter: with artists both local and global, with cultural thought leaders, and with one’s own creative potential. Embedded in the fabric of its community and committed to lifelong learning, the CAC aims to serve as an integral forum where people can reflect, create, collaborate, and connect around a more inclusive and sustainable culture of tomorrow.

Since its founding in 1939, the CAC has been a champion of emerging ideas in contemporary art, hosting one of the first Midwest exhibitions of Picasso’s Guernica in 1939; mounting an early exhibition of Pop Art in 1963; representing the United States at the São Paulo Biennial in 1975; and presenting—and successfully defending—the 1990 Mapplethorpe retrospective that became a lightning rod in the era’s culture wars and propelled the CAC into the national spotlight. Today, the CAC occupies the Lois & Richard Rosenthal Center for Contemporary Art, the first museum designed by architect Zaha Hadid and the first U.S. museum designed by a woman.