Featuring In-Person and Online Programmes from 5–7 March 2022, Annual Convening Engages with the Framework of Sharjah Biennial 15 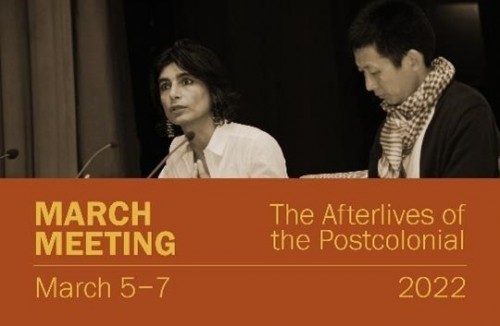 Sharjah Art Foundation (SAF) announced details of the schedule for March Meeting 2022, the Foundation’s annual programme that convenes artists, art professionals and academics for panels, lectures and performances exploring critical issues in contemporary art. Taking place from 5 through 7 March 2022, March Meeting 2022: The Afterlives of the Postcolonial will examine the legacies of colonialism and the contemporary impacts of related issues on cultural, aesthetic and artistic practices around the world. The 2022 edition expands upon March Meeting 2021: Unraveling the Present, both of which engage with the framework of Sharjah Biennial 15: Thinking Historically in the Present, conceived by the late Okwui Enwezor (1963–2019) and curated by SAF President and Director Hoor Al Qasimi, which opens 7 February 2023 and will run through 11 June 2023.

Drawing upon Enwezor’s concept of the “Postcolonial Constellation,” March Meeting 2022 will consider contemporary art and issues through the lens of postcolonialism, the critical study of the historical, social and cultural legacies of colonialism and imperialism. From this perspective, participants will analyze current global issues such as racism, settler colonialism, apartheid, new imperial wars, social movements including Black Lives Matter, Indigenous rights, climate change and the restitution and repatriation of looted artifacts. The programme will also explore theoretical frameworks such as intersectionality, gendered identities, coloniality, and decoloniality. To discuss the “afterlives” of the postcolonial, March Meeting will convene key voices in art and academia whose work reflects discourses, practices, theories and critical perspectives derived from postcolonialism and focused on the late 20th- and early 21st-century world and its present and future challenges.

“We look forward to expanding upon the prominent themes and complex conversations developed during March Meeting’s 2021 and 2022 editions –as we thoroughly explore the 'postcolonial’ and its impact around the world in advance of Sharjah Biennial 15,” said Hoor Al Qasimi, SAF President and Director and SB15 Curator. “We aim to honour Enwezor’s legacy and scholarship through each major event, bringing together ideas of the past, present and future, analyzing how our histories intertwine, while emphasizing the importance of supporting contemporary culture outside of Western models by presenting and producing art and discourse that is responsive to our times.”

Featuring more than 40 speakers spread across three days, March Meeting 2022 will offer 11 sessions, including panel discussions and keynote addresses. Sessions include, among others:

March Meeting 2022 will also feature film screenings and new, site-specific performances by CAMP and Lawrence Abu Hamdan. The event coincides with the opening of several exhibitions, including solo exhibitions of work by Abu Hamdan, CAMP and Khalil Rabah, all opening on 4 March, as well as a retrospective of work by Gerald Annan-Forson, organised in collaboration with The Africa Institute, opening 7 March. A retrospective for Aref El Rayess, organised in collaboration with Sharjah Museums Authority and presented at Sharjah Art Museum, will also be on view.

More details on March Meeting schedule and list of speakers are available here.

Enwezor envisioned the invitation to curate Sharjah Biennial 15 as a way to reflect on and contribute to the Biennial’s history and that of the overarching Foundation, and their role in addressing the need for institutional models outside of the West that support dialogue and the production and presentation of contemporary art responsive to our times. Following March Meeting 2021, which examined the 30-year history of the Sharjah Biennial and the future of the biennial model, March Meeting 2022 further engages with Enwezor’s framework for Sharjah Biennial 15, building momentum towards its opening in February 2023. Sharjah Biennial 15: Thinking Historically in the Present, will continue to explore these themes, bringing together 30 artists to make commissioned works that explore histories that continue to shape our present, alongside a selection of contemporary works by international artists.

March Meeting 2022: The Afterlives of the Postcolonial

For details on March Meeting schedule and list of speakers, visit the link here.

To register to attend on-site or to access sessions online, visit the link here.

Additional information to be announced; visit sharjahart.org for more information.