Ghost Forest Will Create Grove of Spectral Trees within Park’s Verdant Landscape, Building on Lin’s History of Environmentalism within her Artistic Practice 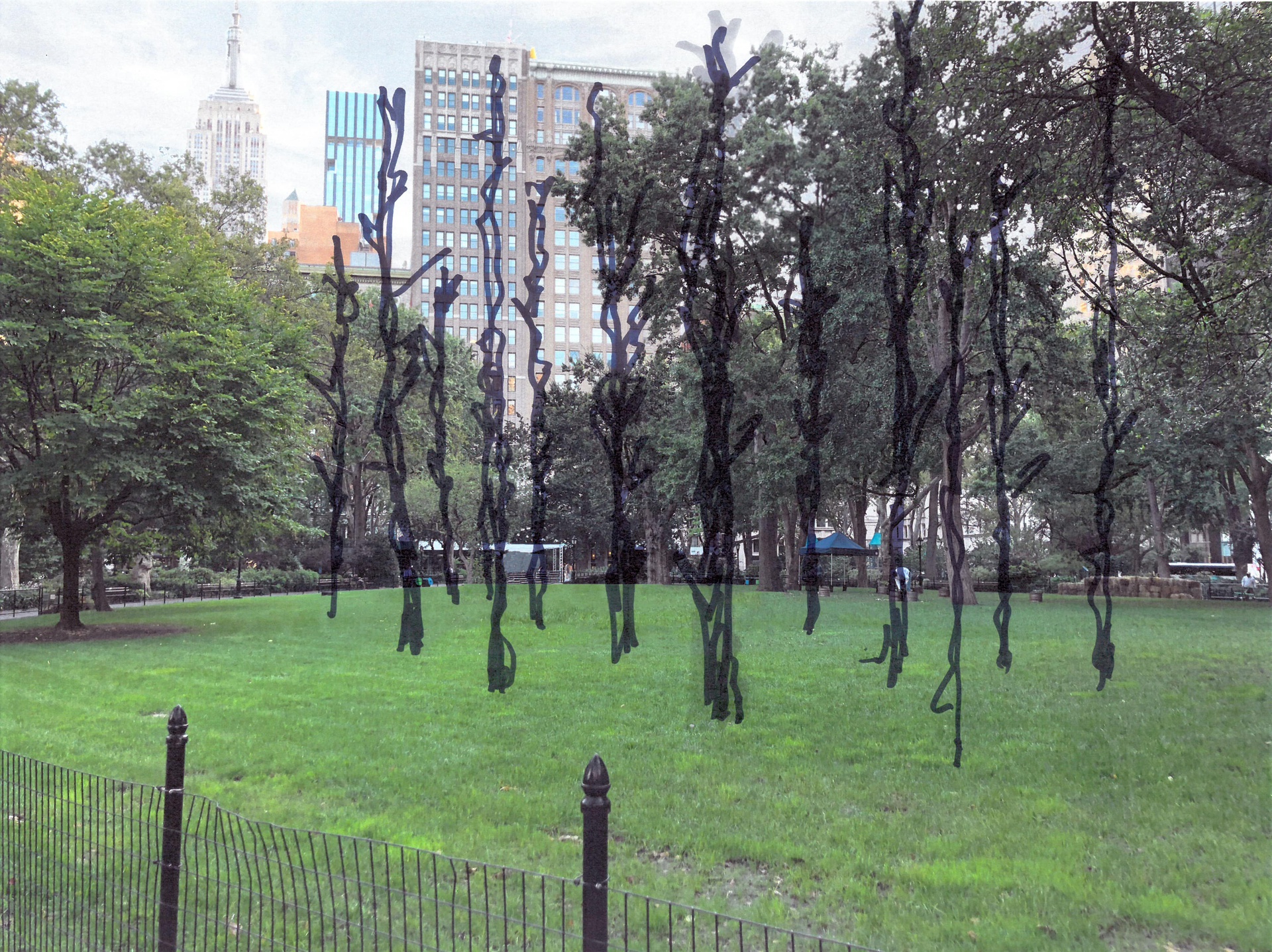 Ghost Forest Will Create Grove of Spectral Trees within Park’s Verdant Landscape, Building on Lin’s History of Environmentalism within her Artistic Practice

For Madison Square Park Conservancy’s public art commissioning program, Maya Lin will realize a new, site-responsive installation that brings into focus the ravages of climate change on woodlands around the world. Ghost Forest will take the form of a towering grove of spectral cedar trees, all sourced from the region and presented in sharp contrast to the Park’s lush tree line. The installation builds on Lin’s practice of addressing climate change within her work and serves as a call to action to the 60,000 visitors who pass through the Park daily. Originally planned for June 2020, the exhibition will now open in 2021 and will be complemented by a series of public programs that explore the challenges of climate change and propose potential nature-based solutions.

“Ghost Forest presents two striking alternatives within the context of Madison Square Park— the ashen trees standing in contrast to the vibrancy of the Park,” said Brooke Kamin Rapaport, Deputy Director and Martin Friedman Chief Curator of Madison Square Park Conservancy. “The Conservancy’s public art commissions are transient by nature. Ghost Forest underscores the concept of transience and fragility and stands as a grave reminder of the consequences of inaction to the climate crisis. Within a minimal visual language of austerity and starkness, Lin brings her role as an environmental activist and her vision as an artist to this work.”

Ghost Forest derives its name from the eponymous natural phenomenon: vast tracts of forestland that have died off due to climate change, sea-level rise and saltwater infiltration. To create the installation, Lin worked together with the Conservancy to source dead trees from the Pine Barrens in New Jersey, a vulnerable site that has suffered severe deprivation. The Atlantic Cedars that will be installed in the Park were all afflicted by extreme salinization during Hurricane Sandy in 2012, victims of rising seas and salt-water inundation, and slated to be cleared to allow for the regeneration of surrounding trees. Visitors will be able to wander through the trees, which will be organically interspersed in a dense cluster and stand 25 to 40 feet high. The installation brings the dire reality of this naturally occurring phenomenon to audiences in a dense urban environment and encourages a consideration of nature-based practices that can protect and restore the ecosystem.

“As one of New York’s beloved public greenspaces, the Conservancy is committed to advancing environmental stewardship at the Park and beyond through our mission and program. We are honored to be collaborating with Maya Lin to realize this powerful new commission that will heighten awareness of the realities of climate change and of urgent environmental issues that affects us all,” added the Conservancy’s Executive Director Keats Myer.

Ghost Forest will be complemented by a series of public programs that build upon the work’s implicit call to action. Events including Art Talks with Lin and climate experts, a reflection board that invites passersby to share their ideas to fight climate change, and a lecture examining ghost forests around the world will galvanize the pubic to act. Music and dance performances in the context of Ghost Forest will offer meditative moments to consider art’s impact, and the power of natural greenspace to calm and connect.

In conjunction with the installation, Madison Square Conservancy will host its sixth annual public art symposium, exploring how artists today consider urgent crises facing our environment including climate change, diplomatic challenges, and concurrent issues of global migration, political turmoil, and food insecurity. Greening Public Art will bring together leading artists, cultural leaders, and journalists to consider these pressing issues, and feature a keynote address between Maya Lin and Paul Hawken, environmentalist, entrepreneur, journalist, and author of Drawdown: The Most Comprehensive Plan Ever Proposed to Reverse Global Warming. Free and open to the public, Greening Public Art is organized by Madison Square Park Conservancy in collaboration with the School of Visual Arts.

Maya Lin (American, b. 1959) is internationally recognized for her wide-ranging practice that encompasses large-scale environmental installations, architectural projects, and memorials, as well as intimate studio artworks. A committed environmentalist, Lin has dedicated a significant part of her practice to exploring issues related to climate change, including an ongoing web-based project, What is Missing?, that raises awareness on habitat loss and biodiversity.

Lin has been the subject of numerous solo exhibitions at museums and galleries worldwide, with works in the permanent collections of the National Gallery of Art, The Metropolitan Museum of Art, The Museum of Modern Art, and the Nelson-Atkins Museum of Art, among others. She has also created permanent outdoor installations for public and private collections around the world including the American Embassy in Beijing, Brown University, California Academy of Sciences, Cleveland Public Library, Cornell Lab of Ornithology, Federal Courthouse in Miami, Princeton University, Rockefeller Foundation, Shantou University, Storm King Art Center, Wexner Center of the Arts, and Yale University.

Born in 1959 and based in Athens, Ohio, Lin holds degrees from Yale and the Yale School of Architecture. She is represented by Pace Gallery in New York.

Ghost Forest is supported in part by an award from the National Endowment for the Arts. Support for this exhibition is also generously provided by Bloomberg Philanthropies, the Jacques & Natasha Gelman Foundation, Agnes Gund, the Ford Foundation, The Ronald and Jo Carole Lauder Foundation, Marders, the Henry Moore Foundation, Pace Gallery, and Anonymous.

Since 2004, the Conservancy has become a leader in commissioning new works of public art, curating and presenting over 35 major site-specific installations and solo exhibitions through its Mad. Sq. Art programming. Led by Brooke Kamin Rapaport, Deputy Director and Martin Friedman Chief Curator, the program invites leading artists to push the boundaries of their practice and create risk-taking new works that experiment with materiality, scale, and theme in response to the Park’s unique environment. The ambition of the commissioning program expands each year alongside the diverse range of innovative artists including Diana Al-Hadid, Tony Cragg, Leonardo Drew, Iván Navarro, Martin Puryear, Arlene Shechet, Ursula von Rydingsvard, and Krzysztof Wodiczko.