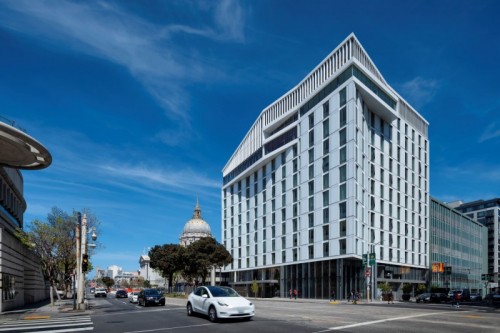 “We designed the Bowes Center as an expression of the Conservatory’s mission, where students and the public can come together to experience music in a welcoming, inspiring space,” said Mark Cavagnero, Founding Principal of Mark Cavagnero Associates. “It’s so gratifying to see it come alive; we hope the building inspires students to learn, connect, and create, in the context of the city’s performing arts leaders.”

The Center is named in honor and recognition of the $46.4M gift from the William K. Bowes, Jr. Foundation, which marks the largest capital gift ever made to a music school; the Foundation’s namesake was a longtime SFCM supporter and trustee. Walking distance to SFCM’s Ann Getty Center at 50 Oak Street, the Conservatory’s home since 2006, the Bowes Center creates housing for up to 420 students. The building also includes 27 rent-stabilized apartments, which upgrade and replace existing units from the site’s previous building for its prior tenants.

“We’re thrilled to inaugurate the Bowes Center,” said SFCM President David Stull. “It was very important to us to create a space that encourages access and breaks down silos. For too long, the world of classical music has been seen as exclusive, with a huge barrier to entry—in its transparency, the Bowes Center invites the public in and builds connection. For students, it creates more housing and interaction between the disciplines to illustrate that a passion in music can build sustainable careers and lifelong pursuits. By creating an inviting space and offering free admission for 90% of our performances each year, we hope to build a community beyond our walls.”

Cavagnero’s design emphasizes openness, engagement, and light through its exterior of white and transparent glass. Filled with the sights and sounds of music, the Bowes Center invites passersby at this active intersection to see performances through floor to ceiling windows in its ground floor jewel-box Cha Chi Ming Recital Hall. The top two floors glow like a beacon at night, with floor to ceiling windows, and the 200-seat Barbro Osher Recital Hall on the roof, flexible event space, and terrace, offering unparalleled views of City Hall, Davies Symphony Hall, the War Memorial Opera House, and other landmarks.

Building on the firm’s innovations in the design of SFJAZZ, Cavagnero’s design for Bowes achieves the transparency of a glass exterior, while exceeding its rigorous acoustic requirements. To achieve a cohesive design language while meeting its high acoustic demands—which change from floor to floor, with a mix of performance, practice, recording, and residential spaces throughout its eleven stories, and are made more complex by the neighboring Van Ness Avenue—the Cavagnero team designed a custom curtainwall system that integrates all acoustic requirements into one seamless envelope. Collaborating with Kirkegaard Associates and Tipping Structural Engineers, Cavagnero pushed the boundaries of glass’s capacity to perform at high acoustic level. The design utilizes double-glazed walls and a floating structural slab to isolate noise and vibration transmission from the street while maintaining transparency into the performance spaces. The double-glazed system also provides a sustainable element to the design, creating additional thermal buffer.

On the Bowes Center’s second level, a Center for New Media features studio space, lesson rooms, and critical listening rooms for students participating in the Conservatory’s Technology and Applied Composition Program. Capitalizing on the school’s location in the performing arts district and proximity to Silicon Valley, the program prepares classically trained composers to score film and video games. The center is also used by students in SFCM’s Roots, Jazz, and American Music Program, created in partnership with SFJAZZ. Classrooms, keyboard labs, a black box Technology Hall, and a recording studio for all SFCM students are located in highly acoustically controlled spaces in the below ground levels. Floors three through 11 hold one, two, and three-bedroom housing units, each acoustically isolated for practicing. One floor is dedicated to housing for San Francisco Ballet Students as an extension of the Conservatory’s unprecedented partnership with the nearby SF Ballet.