Memorial to Enslaved Laborers at University of Virginia Activated by UVA Community and Charlottesville Residents as Space of Gathering, Reflection, and Solidarity

The Memorial to Enslaved Laborers (MEL) at the University of Virginia (UVA) honors the lives, labor, and perseverance of the community of enslaved African Americans who built UVA and sustained daily life of faculty, students, and administrators at the University. Nearly a decade in the making, MEL was designed by Höweler + Yoon in collaboration with historian and designer Dr. Mabel O. Wilson (Studio&), Gregg Bleam Landscape Architect, community facilitator Dr. Frank Dukes, and artist Eto Otitigbe. 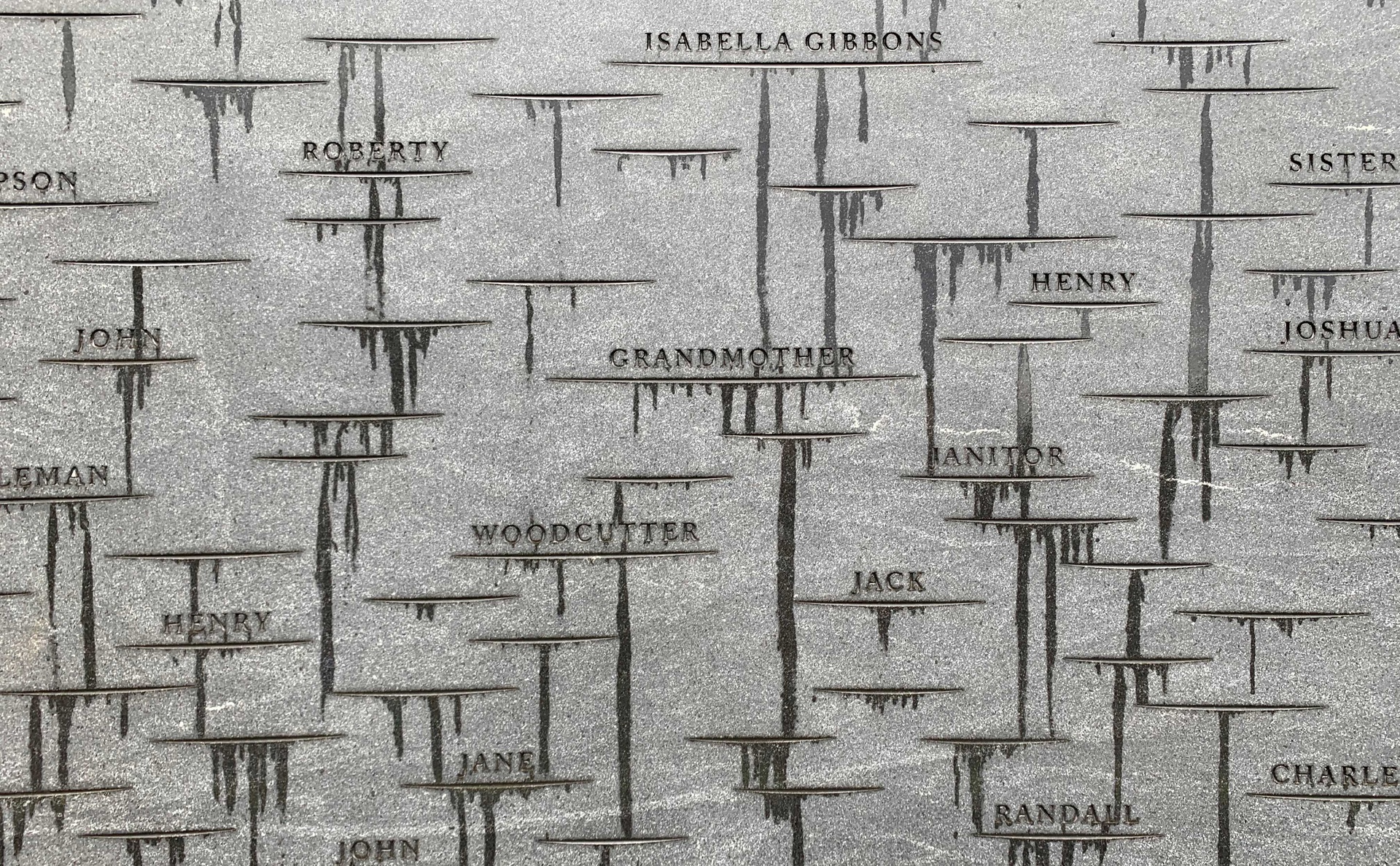 The Memorial to Enslaved Laborers (MEL) at the University of Virginia (UVA) honors the lives, labor, and perseverance of the community of enslaved African Americans who built UVA and sustained daily life of faculty, students, and administrators at the University. Nearly a decade in the making,MEL was designed by Höweler + Yoon in collaboration with historian and designer Dr. Mabel O. Wilson (Studio&), Gregg Bleam Landscape Architect, community facilitator Dr. Frank Dukes, and artist Eto Otitigbe. Originally scheduled to be dedicated in April 2020 by the University and descendants of the enslaved community, the formal dedication has been postponed due to the ongoing COVID-19 health crisis. In the interim, the Memorial has been spontaneously inaugurated as a gathering place for group and individual contemplation during the national protests against racialized violence.

An estimated 4,000 enslaved persons worked on the Grounds of UVA between 1817 and 1865, when the Union Army liberated the enslaved of Albemarle County. Owned and rented by the University, they created and maintained its famous grounds, pavilions, and Rotunda. The Memorial’s commemorative forms and historical inscriptions acknowledge the dualities of enslavement—the pain of bondage and hope for the future. It celebrates the bonds of community that nurtured resistance and resilience to the dehumanizing violence that shaped the everyday experience of enslaved life at UVA. In doing so, the Memorial creates a vital public place to understand, learn, and remember their contribution to the University.

UVA students catalyzed a memorial to honor the lives of the enslaved community in 2010 with initiatives to raise awareness about the history of slavery at the University. The following year, they formed a student-run competition for a memorial to enslaved laborers. The President’s Commission on Slavery and the University (PCSU) was then formed in 2013 to explore and report on the history of slavery on UVA Grounds and consider ways to commemorate their contribution to the institution founded by Thomas Jefferson—the third president of the United States, the architect of the University of Virginia, and a slave holder. As a result of this important work, UVA formally commissioned the Memorial to Enslaved Laborers in 2016. The design process began that October with a series of dialogues and community engagements. In multiple public forums and surveys, students, staff, faculty, alumni, and community members, including descendants of the enslaved, shared their vision, aspirations, and ideas. Their generous responses informed each element of the Memorial’s design. As one participant wrote, “The memorial must evoke the human spirit, show pain, love, life, and death...”

“The Memorial responds to the fraught history of UVA with an open form, a sweeping gesture in stone that is welcoming and inclusive, as if waiting for the visitor to complete the Memorial. It is a form that is open in terms of meaning, alluding to the ‘ring shout’ and a space of shelter and gathering. The Memorial is also open ended in that it is unfinished, with the list of names remaining conspicuously incomplete. The unfinished nature of the Memorial also alludes to the historic legacy of slavery and the ongoing work in the present that needs to be done to address questions of bias and anti-Black racism today,” said Eric Höweler, co-founder of Höweler + Yoon and Associate Professor of Architecture at Harvard University Graduate School of Design.

Meejin Yoon, co-founder of Höweler + Yoon and Dean of Cornell University’s College of Architecture, Art and Planning, shared, “The Memorial is not just about memory. It is about the present, and the work that we all need to be engaged in today. The Memorial is about actively bringing people together. It is about opening up dialog, between visitors and individuals, but also between the University and the community. It is rebuilding a relationship and rebuilding trust. These are the necessary steps in the contemporary conversations about race and repair.”

“This Memorial confronts a campus whose very architecture was conceived to express the highest aspirations of our democratic society yet, at the same time, was literally designed to obscure the oppression of the enslaved individuals who realized Jefferson’s vision and sustained life on campus for nearly 50 years,” said Dr. Mabel O. Wilson, Professor of Architecture and African American and African Diaspora Studies at Columbia University. “It provides a much-needed space for active engagement with the grim reality of slavery and systemic racism, the repercussions of which the nation is still wrestling with today.”

The Memorial to Enslaved Laborers rises on the east side of the Lawn, directly east of the University’s iconic Rotunda dome. It is sited in an area referred to as the Triangle of Grass, part of the UNESCO World Heritage Site and along University Avenue that connects to downtown Charlottesville. The original swales—the low areas that frame the entrance into the Academical Village—were part of a larger landscape strategy, which included the University’s iconic serpentine walls, to hide enslaved labor from view. Oriented northward toward the symbolic path to freedom, MEL transforms the historical usage of the landscape as a tool of domination by becoming an open and welcoming place for those seeking truth and justice.

With its abstract circular form rooted in the terrain, the Memorial carves out a gathering space for the community to continue the conversation about slavery and the ongoing injustices that catalyzed it. Constructed out of local “Virginia Mist” granite, MEL opens this part of the Grounds as a place for collective commemoration and individual contemplation. The Memorial encourages multiple visitor experiences by layering imagery, forms, and rituals from across the African diaspora and African continent. The memorial evokes the “Ring Shout,” an African American spiritual dance performed in a circle, that celebrates liberation. The Memorial consists of concentric granite rings, into which nest a circular meeting ground, a water table featuring a timeline honoring the enslaved, a sweeping concave wall of memory marks and names of the enslaved community, and a textured convex sloping stone inscribed with a portrait of Isabella Gibbons, an enslaved domestic worker at UVA and later a teacher in Charlottesville. Steppingstones in the grass adjacent to the Memorial mark a northern path and point to the North Star, which served as a beacon leading enslaved people to freedom. The Memorial measures 80 feet in diameter, which is also the diameter of the Rotunda.

The Memorial’s walls and surfaces recall the material culture of enslaved workers and their craftsmanship by using marks, carvings, textures, and imagery redolent of the physical suffering of the enslaved and the endurance of their human spirit. The Memorial’s outer wall remembers the lives of the enslaved individuals. The varied surface textures of the rough-hewn granite evoke different aspects of the enslaved laborers’ experiences: linear marks echo the parallel drill marks visible on hand quarried stone blocks and the scalloped surface texture recalls the hand-tooled stone finishes found on local cemetery headstones from that period. The granite exterior incorporates artist Eto Otitigbe’s monumental portrait of Isabella Gibbons. The likeness of Gibbon’s eyes was inscribed into the granite as a witness to her community’s history and becomes visible from specific vantage points at different parts of the day.

The Memorial’s inner wall honors each of the 4,000 members of the enslaved community. The design team worked closely with researchers to display the names of 578 members, and another 311 members whose names were not identified in records but are acknowledged by their occupation or kinship relation, as they were recorded without names. The 4,000 memory marks serve to underscore each enslaved person’s life and to remind visitors of the violence incurred in the dehumanization of men, women, and children whose names remain unknown. The wall of marks and names functions as an incomplete and unfinished archive, with names of the community to be added as they are discovered.

The ring that frames the central circle of grass of the Memorial presents a timeline that narrates the experiences of enslaved people at UVA while placing them within a larger historical context, beginning with the first written mention of enslaved Africans arriving in Virginia in 1619 and continuing through Isabella Gibbons’ death in 1889. The water that flows over the timeline evokes African libation rituals, the Middle Passage, baptismal ceremonies, and rivers as routes to liberation. The Memorial’s rings embrace a circular lawn, which will bloom with flowering blue crocuses each February. The meeting ground serves as a community forum and a space for gathering, celebration, performance, education, and stage for civic engagement. It creates a living connection between the ancestors who built UVA and those that benefit from their work today, the descendant community, and future generations.

A date for the formal dedication of the Memorial to Enslaved Laborers will be announced in the coming months.

Partial sentence credit: The Memorial to Enslaved Laborers was designed by Höweler + Yoon Architecture in collaboration with historian and designer Dr. Mabel O. Wilson (Studio&), and others.

Memorial to Enslaved Laborers at University of Virginia Activated by UVA Community and Charlottesville Residents as Space of Gathering, Reflection, and Solidarity