Donated by Civic Leader and Developer Alex Karakhanian, 90-by-50-Foot Mural will be Visible along Interstate 195 by over 45 Million Drivers Annually 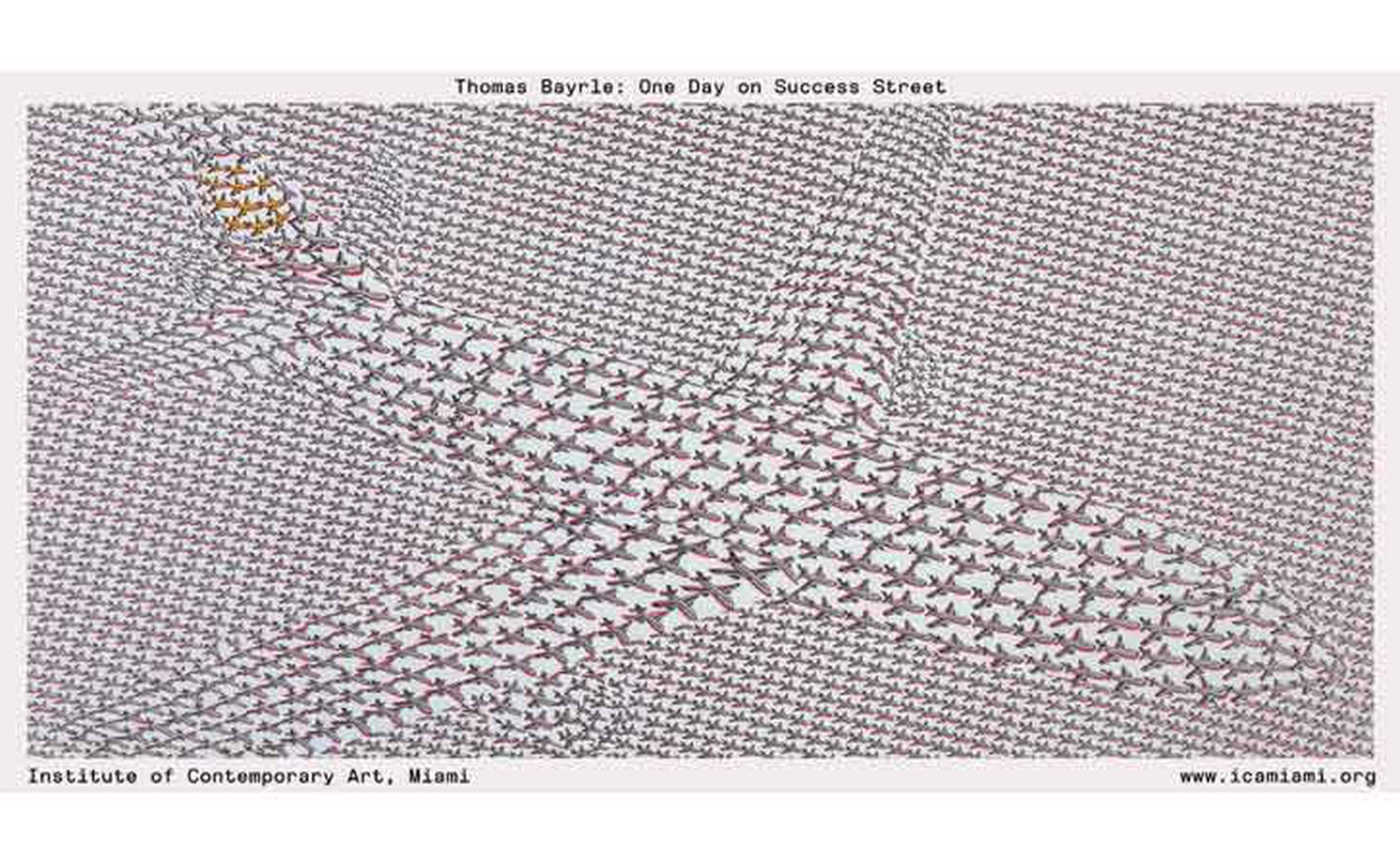 Donated by Civic Leader and Developer Alex Karakhanian, 90-by-50-Foot Mural will be Visible along Interstate 195 by over 45 Million Drivers Annually

As the Institute of Contemporary Art, Miami launches its final exhibition in its temporary space in the landmark Moore Building, the museum has partnered with local developer Alex Karakhanian and his wife Rena Karakhanian to install a larger-than-life-sized mural featuring the work of artist Thomas Bayrle in the Miami Design District. The 90-by-50-foot public artwork depicting a giant airplane will greet drivers passing by the Karakhanian-developed office building at 3704 NE 2nd Avenue, along one of the city’s busiest highways, Interstate 195. The museum will unveil the mural on November 29, in coordination with the opening of One Day on Success Street, Bayrle’s first solo U.S. museum exhibition, during Art Basel Miami Beach 2016.

“We are so grateful to the Karakhanians and Craig Robins for their visionary civic leadership and generosity, which enables the realization of this incredible work of public art. This commission is just one example of how the museum will continue to define innovative platforms to activate public space and inspire dialogue through contemporary art,” said Ellen Salpeter, Director of ICA Miami.

Titled Lufthansa (1982) after the popular German airline, the mural is one of Bayrle’s signature “super-forms,” comprised of an intricate pattern of smaller airplanes that optically transform into one larger image. The original work is on display as part of ICA Miami’s exhibition dedicated to the German artist, which is on view through March 26, 2017 and features 150 works across a range of media, from the late 1960s to the present. The exhibition marks ICA Miami’s final presentation at the Moore Building as it prepares to open its new permanent home in the Miami Design District on December 1, 2017.

“This donation stems from our love of art and our belief that museums and public art are critical components in creating a dynamic and vibrant neighborhood,” said real estate developer Alex Karakhanian. “We hope this work will not only activate the streets of the Miami Design District but will encourage visitors to explore ICA Miami and all the other offerings within the district.”

The oversized mural will greet the more than 130,000 vehicles that pass through this stretch of I-195 each day, including drivers entering the Miami Design District and traveling to and from Miami Beach. The mural follows Bayrle’s 2012 commission in New York City, where the artist presented the work American Dream above the High Line, and his recent presentation of Flugzeug [Airplane], 1982-83, by Gavin Brown’s enterprise as part of Art Basel Unlimited. Lufthansa will remain on view in the Design District through the duration of the exhibition.

“The Design District is known for creating opportunities for visitors and Miamians alike to experience both a diverse range of artistic expression and high-end commercial design. Central to this effort has been our various and ongoing collaborations with ICA Miami,” said Craig Robins, CEO and President of Dacra. “Alex and Rena’s generous contribution of their building facade to public art, curated by the museum, is a perfect example of what we are about.”

“Thomas Bayrle has been exploring the relationship between infrastructure, transportation, and our daily lives for more than 40 years, so it is fitting that his monumental work will greet drivers on one of the most traveled roads in Miami,” noted Alex Gartenfeld, Deputy Director and Chief Curator of ICA Miami. “Our hope is that this mural will create meaningful dialogue in the community and become an instant Design District icon.”