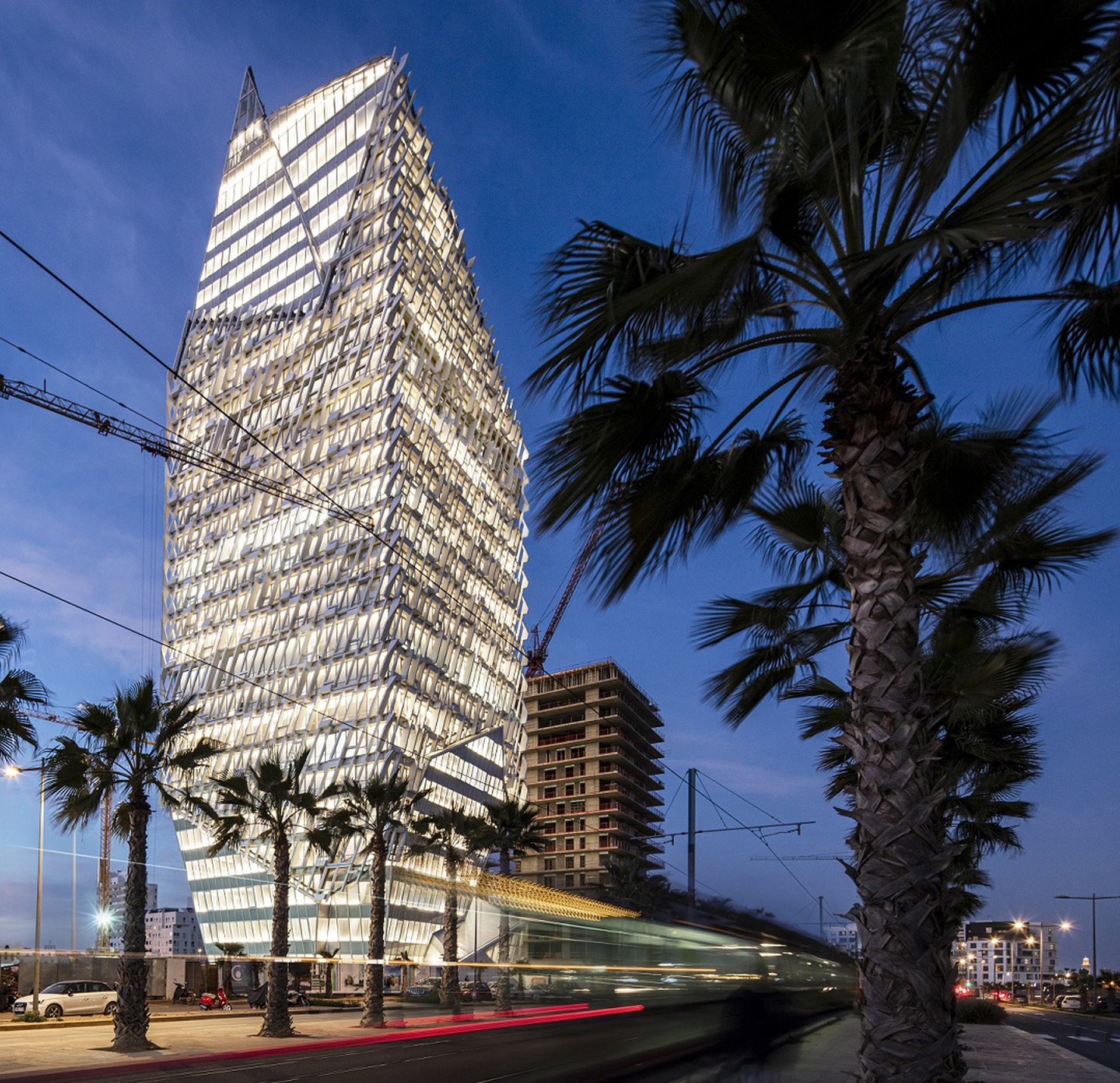 Designed by global architecture firm Morphosis, Casablanca Finance City Tower is the first project to be realized in the newly-established Casablanca Finance City (CFC)—a transformative new business district currently being developed in the Anfa District southwest of the historic city center. The completion of the 25-story tower in April 2019 marked a significant milestone for Casablanca as it expands on its historical role as the gateway to Africa. CFC, a government-endorsed initiative, invites global firms to establish their regional headquarters in Morocco within this special economic zone. Developed in close partnership with CFC leadership, the Tower marks Morphosis’ first project in Africa.

The Casablanca Finance City Tower plays a critical role in the ongoing development of the CFC, located in the Anfa District, which was home to the Anfa Airport until it closed in 2007. CFC symbolizes Morocco’s vision for the future and sets precedents in building performance, scale, and technology for a part of the city that is yet to be fully realized. Working in harmony with the site’s climate and designed to minimize ecological impact, the tower sets a new standard for future projects in the region and beyond.

“The Casablanca Finance City Tower and its innovative design was conceived to have long-lasting impact and to signal a new era of economic prosperity for Morocco,” said Pritzker Prize-winning architect and Morphosis Founding Partner Thom Mayne. “This tower brings together a range of global industries in the heart of the country, galvanizing international investment in North Africa, while also providing a template for the future development of the district as it continues to grow.”

Morphosis Partner and Project Principal Ung-Joo Scott Lee added: “We are immensely grateful to have had the opportunity to contribute to this historic turning point for Morocco, through our collaboration with the visionary leaders at Casablanca Finance City. Working closely together, we were able to push the boundaries of design and construction, transforming a blank satellite site into a dynamic development that sustainably engages with its surrounding environment.”

The design for the Casablanca Finance City Tower draws on the unique openness of the surrounding area, which afforded the designers the unusual opportunity in an otherwise dense city to highlight the relationship between the building and the natural environment. A brise-soleil system wraps the building, protecting against the sun while still allowing the building to harness external elements to regulate natural light, air, and temperatures internally, in addition to offering unprecedented views of the city, ocean, and the iconic Hassan II Mosque. This façade draws inspiration from traditional geometric patterned mosaics and intricate wooden latticework screens characteristic of Moroccan architecture. As a result of this energy efficient system, the building meets all LEED Gold requirements of the World Green Building Council.

A tapered crown capping the 400-foot (122-meter) structure realizes the tower’s function as a new icon for the city. Mirrored at street level, the building engages the lower urban landscape with exterior public programming that invites the community into adjacent public spaces. This double crown allows the building to simultaneously serve as a symbol of the city’s development and as a social hub that nurtures an active street life in the district.