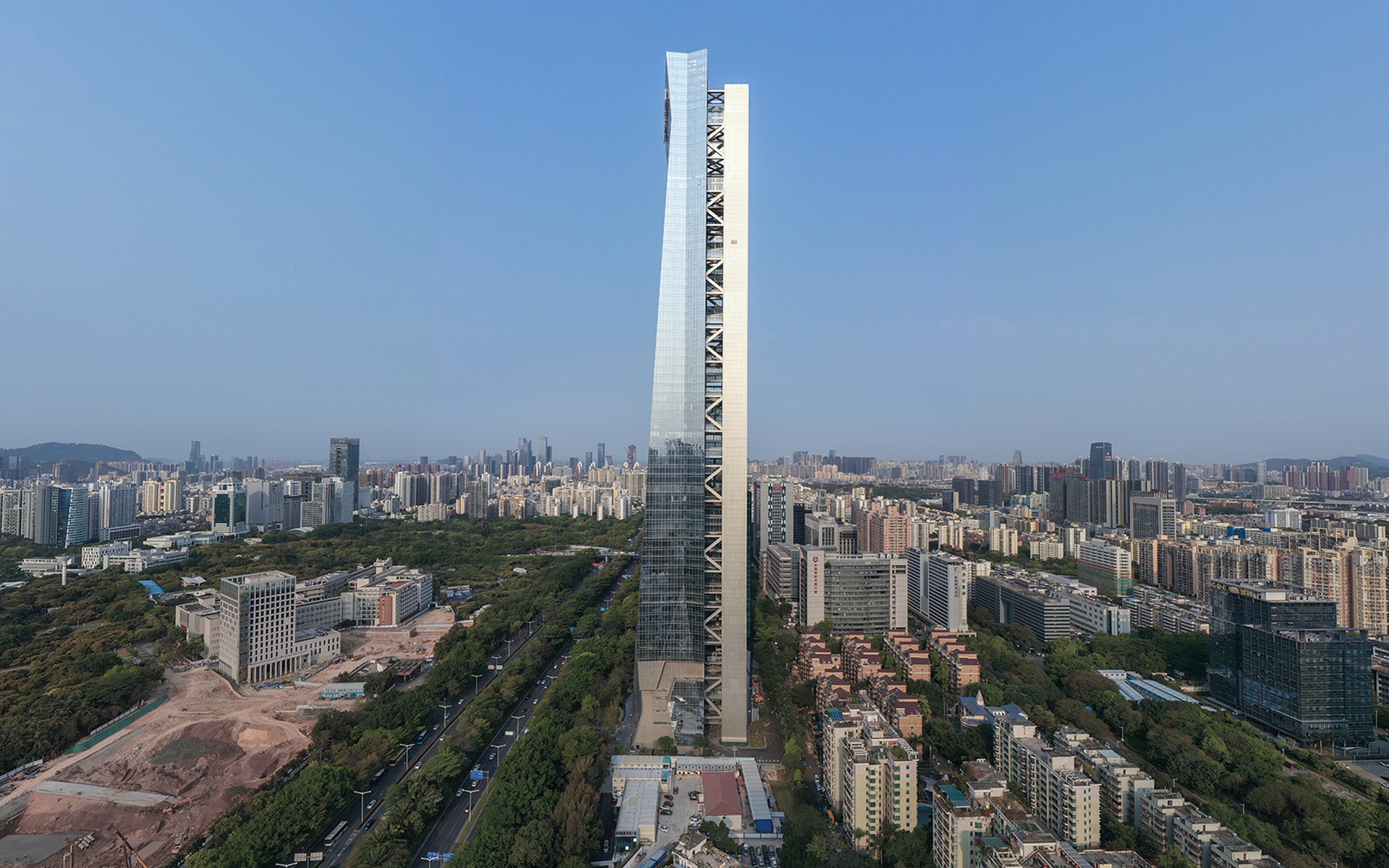 Global architecture and design firm Morphosis has completed work on Hanking Center, a mixed-use complex with a commercial office tower and retail center located in Shenzhen, China. At 359.8m tall, the 65-story tower is defined by its pioneering steel structural system and a detached-core configuration which positions the tower’s primary core on the building’s exterior. This radical rethinking of the typology promotes higher efficiency and adaptability of interior floor plates, enhancing the tower’s ability to service the varying needs of its occupants. The detached-core configuration also allows for an innovative approach to internal circulation and the creation of social and work spaces that seamlessly integrate public and private domains. Completed in 2018 with a gradual opening that continues into 2021, the tower is the firm’s first supertall skyscraper and houses 1.8 million square feet of facilities. As of 2021, Hanking Center is the tallest detached-core building in the world.

“As a typology, skyscrapers tend to emphasize shape as the primary differentiator,” said Pritzker Prize-winning architect and Morphosis Founding Partner Thom Mayne. “Instead, we focused on lived experience within the city. The delamination between the circulation core and the office spaces within the tower generates a threshold, an intensification of the urban landscape as part of the day-to-day."

Project Director and Morphosis Partner Eui-Sung Yi added: “Hanking Center continues the firm’s tradition of creating buildings that reflect the spirit of the cities in which they are located and that are also deeply integrated within its urban fabric. As Shenzhen continues to grow, we are proud to contribute a striking new icon for the city that mirrors its own ambitions.”

Hanking Center’s slender profile redefines Shenzhen’s skyline, emerging elegantly above a low-rise retail podium that also features angled facets, shadowing the form of the tower above. A series of glass sky bridges and steel mega-braces knit the offset core to the main body of the tower, creating dramatic connections in the sky that allow for efficient circulation routes within the tower. At ground level, the Center is accessible by multiple entrances and is set within a landscaped public plaza, ensuring a permeable site that invites the public into the retail podium. Serving the city’s growing population of global professionals, Hanking Center, which sits adjacent to Shenzhen University, activates the district by bringing a new hub of pedestrian-friendly activity to Shennan Boulevard, a major thoroughfare connecting Shenzhen’s neighborhoods.

Designed as an incubator for the city’s rapidly developing high-tech industrial sector, the tower has been constructed to enhance the flexibility of interior spaces to meet the needs of start-up firms and their evolving spatial requirements. By shifting the primary movement and service cores outside the main body of the tower, Morphosis’ design significantly minimizes the building’s structural footprint while maximizing open spaces inside the tower. The tower itself is defined by a robust steel frame that provides structural support while also shaping the building’s geometry. Rather than creating a perfectly symmetrical block, the exoskeletal frame bends and straightens to expand and contract interior floor sizes, creating a sense of movement through this sculptural quality.

The tower’s open floor plates allow for ample penetration of light which in turn creates healthier work environments with enhanced natural light and airflow. Offsetting the core also allows for a public to private gradient of activity on each floorplate, as tenants move from circulation around the core to quieter perimeter offices with panoramic views. Freed from the interior of the building, circulation and amenity areas can be shifted to the tower’s periphery, improving access to natural light and views over the city. In addition to the offset circulation core, two secondary cores in the body provide additional structural reinforcement and house mechanical services such as freight and VIP elevators.

In addition to the tower’s structural innovations, Hanking Center rethinks the traditional commercial office building by integrating the office tower and its podium. A departure from conventional towers where differing program is often relegated to separate and disjointed volumes, folded angles are deployed to elegantly merge public components in the podium with private commercial space in the tower. Inside the retail podium, a tapered atrium draws natural light down into the mall creating an inviting interior environment for the visiting public. Further integrating the development with the existing streetscape, a grand plaza and dimensional hardscape surrounds the tower’s podium, creating a new neighborhood landmark that enhances public activity at the street level.