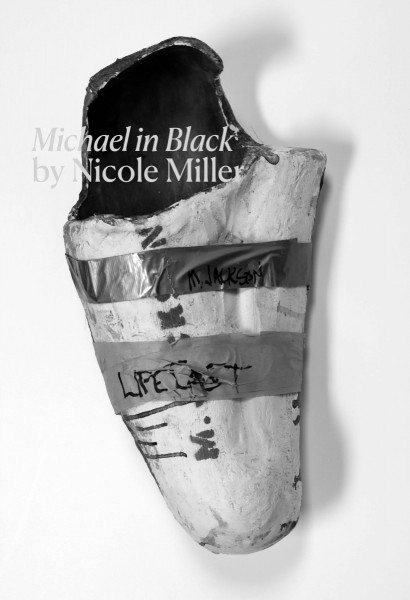 Michael in Black by Nicole Miller (2022) focuses on a single sculptural work by artist and filmmaker Nicole Miller: Michael in Black (2018). The publication coalesces images of Miller’s work alongside newly commissioned texts and visual artworks by a cast of other artists and writers, as well as republished texts and existing artwork recontextualized through the publication’s subject.

The original sculpture Michael in Black is a bronze cast of Michael Jackson’s kneeling figure, poured from a mold made directly from his body circa 1987. This charged object comprises myriad aspects of performance, celebrity, and image: the objecthood of the performer, the potency and perversity of objects, death, grief, and editing. This sculpture is an outlier in Nicole Miller's largely video and installation-centered work, though it excavates some concerns she has similarly articulated in moving image: her recurring interest in the self-performance of her film subjects; the dehumanizing effects of the mass gaze; the celebrity as a host object for contemporary projections; the tactility of film; the sculptural qualities of editing; and the potential for self-storytelling to reconstitute an individual’s wholeness.

Michael in Black by Nicole Miller is co-published by the Center for Art, Research and Alliances (CARA) and Public Fiction. Edited by Nicole Miller and Lauren Mackler, the publication acts as both a monograph for Miller’s work and as the new, 11th issue of the Public Fiction journal, utilizing Miller’s work as a springboard for an anthology of cultural criticism. Part reader, part art book, Michael in Black by Nicole Miller unpacks an artist’s oeuvre as well as the ecosystem that informs and feeds it. Each contribution stands in dialogue with Miller’s work and also independently, this book experiments with the monograph as a form and the book as a physical space and object.

The publication of Michael in Black by Nicole Miller marks the first collaboration between CARA (formerly, New York Consolidated) and Public Fiction. CARA and Public Fiction have both established formidable publishing practices as central components of their programs, with a focus on collaborating with partners to develop projects that expand traditional publishing formats and subjects. These publications celebrate and give a platform to creative voices, spanning a range of perspectives, cultural histories, and scholarship.

Michael in Black by Nicole Miller is available for purchase June 21, 2022.

About Nicole Miller
Nicole Miller lives and works in California, where she is Associate Professor in the Department of Visual Arts at the University of California, San Diego. She has exhibited in solo and group exhibitions at institutions including the Studio Museum in Harlem, the California African American Museum, the Ulrich Museum of Art, MoCA Tuscon, Astrup Fearnley Museet in Oslo, and the Centre d’Art Contemporain in Geneva, among others. Miller’s work is in the collections of museums such as the San Francisco Museum of Modern Art, the Los Angeles County Museum of Art, and the Hammer Museum in Los Angeles. Miller has been the recipient of several grants, prizes, and awards, including a Guggenheim Fellowship (2018), the Rome Prize (2016), the William H. Johnson Prize (2015), and many others. Nicole Miller: A Sound, a Signal, the Circus, a site-specific, immersive installation that explores and expands an understanding of synesthesia as it relates to the Black experience in the United States, is currently on view through July 25, 2022, at the Kemper Art Museum in St. Louis, Missouri.

About Public Fiction
Founded in 2010 by Lauren Mackler and featuring a rotating cast of collaborators, Public Fiction is a project space and journal based in Los Angeles, California. Public Fiction has staged "off-site” exhibitions and publications at The Museum of Contemporary Art, Los Angeles; The Church of the Holy Shroud in Turin, Italy; the Berkeley Museum of Art; Frieze Projects New York; the Hammer Museum; the MAK Center for Art and Architecture’s Schindler House; and the Museum of Contemporary Art (MCA) Chicago. While past issues of the Public Fiction journal have aggregated an interdisciplinary cast of contributors around a theme, this eleventh issue focuses on a single work of sculpture: Michael in Black (2018) by Nicole Miller.

Public Fiction’s program presents a series of exhibitions on a theme, each theme lasting three months and culminating in a journal. Related talks, screenings, secret restaurants, and performances are held within the installations and around the topic at hand. Public Fiction’s program is intergenerational, interdisciplinary, and treats the exhibition as a medium in itself. Each publication, emerging from the exhibitions and in dialogue with its subjects, acts as another exhibition on the page and comprises newly commissioned writing alongside republished pieces and artworks made for the page.

Central to CARA’s mission are collaborations with artists, artist estates, curators, researchers, oral historians, collectives, and other organizations. In July and August 2022, CARA will host “Conjurings,” a series of three weekend-long public programs led by its curatorial team in collaboration with artist and music producer Lamin Fofana, curator Erika Sprey, and artist Sky Hopinka. CARA will open daily to the public in fall 2022, concurrent with the launch of its exhibition program, and will announce its first cohort of Fellows in late 2022.

CARA is located at 225 West 13th Street in New York’s West Village, which CARA recognizes as built upon Lenapehoking, the unceded lands of the Lenni-Lenape and home for many Indigenous peoples past, present, and future.

CARA is working with Art to Zero—an organization that works to “accelerate the visual arts’ transition to a decarbonized future”—to reduce its carbon footprint, with recognition of deep-seated intersections between social and environmental justice.