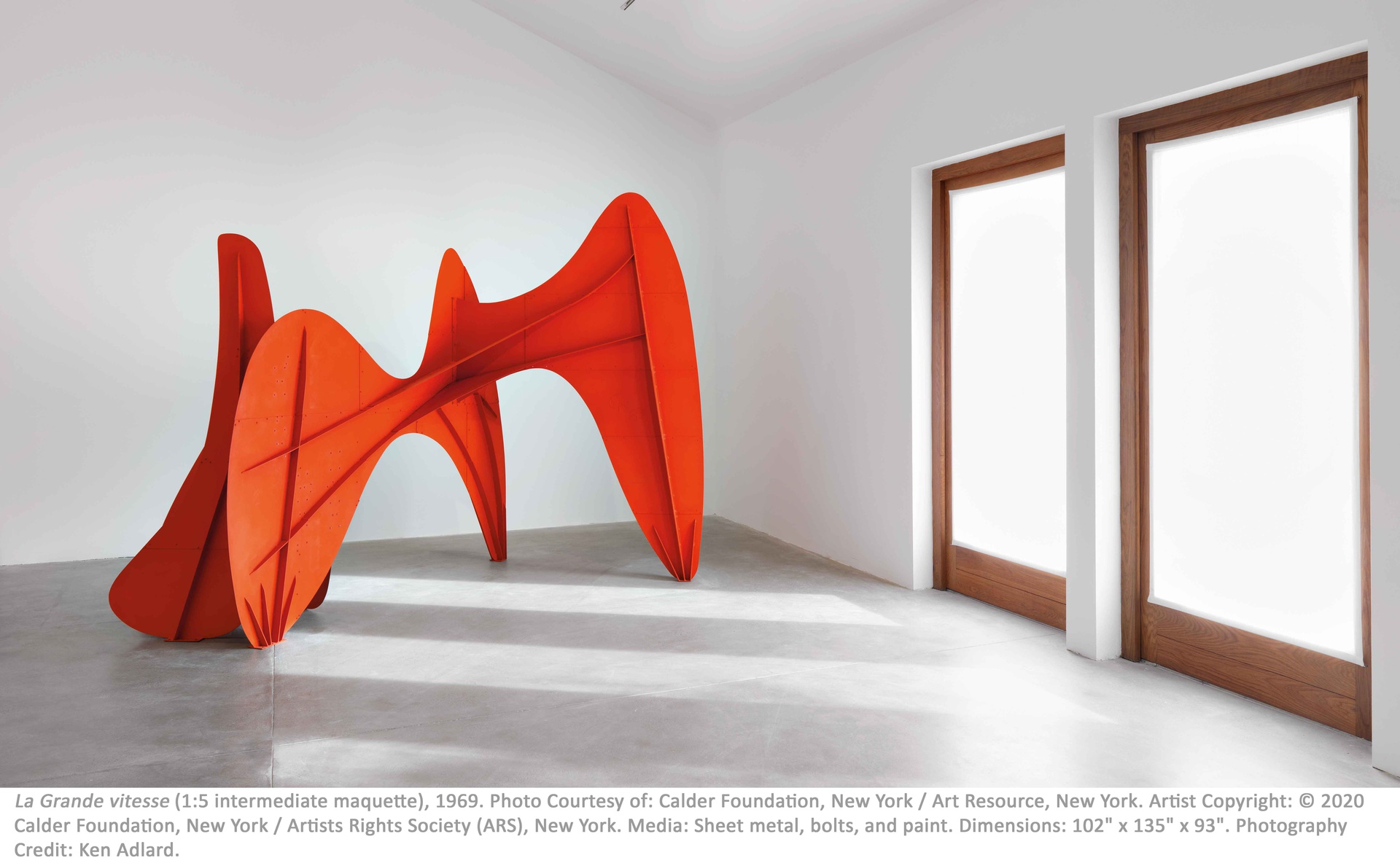 A new sanctuary dedicated to the art of Alexander Calder, one of the most innovative artists of the 20th century, will be created in the heart of downtown Philadelphia. Herzog & de Meuron has been selected to design the new cultural facility, which will feature bespoke galleries and gardens presenting a rotating selection of masterworks from the Calder Foundation, including mobiles, stabiles, monumental sculptures, and paintings. The nonprofit initiative, which will be formally named in the coming months, has been launched by a group of Philadelphia philanthropists working in collaboration with the Calder Foundation and in partnership with the City of Philadelphia and the Commonwealth of Pennsylvania.

Tuned specifically for the presentation of Calder’s work, the spaces and gardens will unfold as a choreographed progression that will move viewers beyond the traditional museum experience to engage with the work in the way the artist intended—as a personal, real-time encounter. The facility will include opportunities to explore works by Calder’s parents, the artists Alexander Stirling Calder and Nanette Lederer Calder, and his grandfather Alexander Milne Calder, all of whom had deep ties to Philadelphia. Design plans for the new building, which will be located on Benjamin Franklin Parkway between 21st and 22nd Streets, across from the Barnes Foundation and the Rodin Museum, are expected to be unveiled in late summer 2020, with construction to begin in early 2021.

“This initiative marks the first time that a building and grounds are being commissioned specifically to display Calder’s work. The Foundation is thrilled to collaborate on creating a meditative place that has the express purpose of enabling the public to experience and engage with my grandfather’s radical work in unprecedented ways,” stated Alexander S. C. Rower, President of the Calder Foundation and grandson of the artist.

Calder was born in Philadelphia and his connections to the city are grounded in the rich artistic lineage of his family. A trio of iconic sculptures by three generations of Calders can be found along the Benjamin Franklin Parkway: at the southeast end, atop City Hall, is Milne’s monumental statue William Penn (c. 1886–94); at the midpoint is Swann Memorial Fountain (1924) by Stirling; and at the northwest end is Calder’s monumental mobile The Ghost (1964), hanging in the main hall of the Philadelphia Museum of Art.

Earlier plans for the creation of a Calder gallery space on Franklin Parkway began some 20 years ago. Among the parties involved in those discussions were the late-philanthropist Gerry Lenfest, the Pew Charitable Trusts, and the Neubauer Family Foundation. In the fall of 2017, conversation was reopened to find a way to celebrate the artist. The initiative in its current form has gained support from Philadelphians committed to enhancing the city’s art and cultural resources, including the Neubauer Family Foundation, The Pew Charitable Trusts, H. F. Lenfest, and an anonymous donor, with the support of the City of Philadelphia, and the Commonwealth of Pennsylvania. The Calder project will form its own board of directors and is in discussions with the Barnes about a collaborative relationship with the Barnes Foundation for select administrative, curatorial, educational, and operational services. The architect selection process for the project was overseen by Martha Thorne, executive director of the Pritzker Architecture Prize.

“Philadelphians understand how great art makes great cities. This new sanctuary for Calder’s art with its galleries and gardens is moving forward thanks to the vision of individuals and organizations dedicated to expanding the city’s public cultural resources for future generations,” stated Joe Neubauer, Trustee of the Neubauer Family Foundation. “I would like to thank the Calder Foundation, the leadership of both the City of Philadelphia and the Commonwealth of Pennsylvania, and the other generous donors who are bringing this groundbreaking project to life.”

“This is a major accomplishment for Philadelphia,” said Rebecca W. Rimel, President and CEO, The Pew Charitable Trusts. “The artistry of the Calder family is an important part of the fabric of our city, and we are proud to continue our commitment to the Parkway by contributing to this bold and important project. A home on the Parkway for some of Calder’s most consequential works will advance the city’s reputation as a world-class arts destination and enhance its appeal to national and international visitors.”

“From the William Penn statue atop City Hall to the Swann Fountain in Logan Square to the majestic mobile in the Philadelphia Museum of Art, Calder family artworks have been woven into the fabric of the city for more than a century,” said Mayor Jim Kenney. “The addition of a new and unique arts institution in the heart of the city that celebrates the Calders’ art will provide Philadelphians and those who visit a wonderful and inspiring experience alongside all of the other great cultural resources and museums our city has to offer.”

“It is most fitting and extremely exciting to add an institution dedicated to the Calders to the procession of museums and cultural and historic organizations along the Benjamin Franklin Parkway that leads from Logan Square to the Museum of Art,” stated Matt Rader, president of the Parkway Council Foundation Board of Directors. “It is wonderful to see what has long been a dream, now become a reality.”

Founded in Basel in 1978, Herzog & de Meuron are known for designs that are at once highly inventive and sensitive to the site, geography, and culture of the region for which they are planned. Celebrated for their work in the cultural sector in particular and for creating spaces for the experience of art, Herzog & de Meuron have been awarded numerous prizes including The Pritzker Architecture Prize, in 2001, and the RIBA Royal Gold Medal and the Praemium Imperiale, both in 2007. Current projects include: The extension of the Stadtcasino Basel (Switzerland), one of the oldest and most important concert halls in Europe; M+, a new museum for visual culture in Hong Kong; and the National Library of Israel in Jerusalem. Recently completed projects include the Tai Kwun Centre for Heritage & Arts, (Hong Kong); Elbphilharmonie Hamburg (Germany); The Tate Modern Project in London, UK (2016); and the Park Avenue Armory, the ongoing restoration and reinvention of a historical landmark into a visual and performing arts space in New York City.

Herzog & de Meuron is led by Jacques Herzog and Pierre de Meuron, together with five Senior Partners and six Partners, and supported by an international team of almost 500 collaborators. The firm has offices in Basel, New York, London, Berlin, and Hong Kong.

About the Calder Foundation

The Calder Foundation, a nonprofit 501(c)3 organization founded in 1987 by Alexander S. C. Rower and the Calder family, is dedicated to collecting, exhibiting, preserving, and interpreting the art and archives of Alexander Calder. The purposes of the Foundation include the furtherance of public knowledge and appreciation for the visual arts; the conduct of research in art history and related subjects, and the provision of the results of that research to the general public; and the provision of facilities and programs to assist in the education and development of visual artists. The Foundation’s projects include collaborating on exhibitions and publications, organizing and maintaining the Calder archives, examining works attributed to Calder, and cataloguing the artist’s works. The Foundation's programming also includes its own exhibitions, lectures, performances, and events on Calder as well as on contemporary artists who the Foundation supports through the biannual Calder Prize and the Atelier Calder residency program in Saché, France.