Features include an expansive indoor forest, the world’s tallest indoor waterfall, tree-top walking trails, restaurants, retail, and a variety of gathering places, open to all travellers and the public alike.

Jewel weaves together an experience of nature and the marketplace, dramatically asserting the idea of the airport as an uplifting and vibrant urban center, engaging travelers, visitors, and residents, and echoing Singapore’s reputation as ‘The City in the Garden.’ –Moshe Safdie 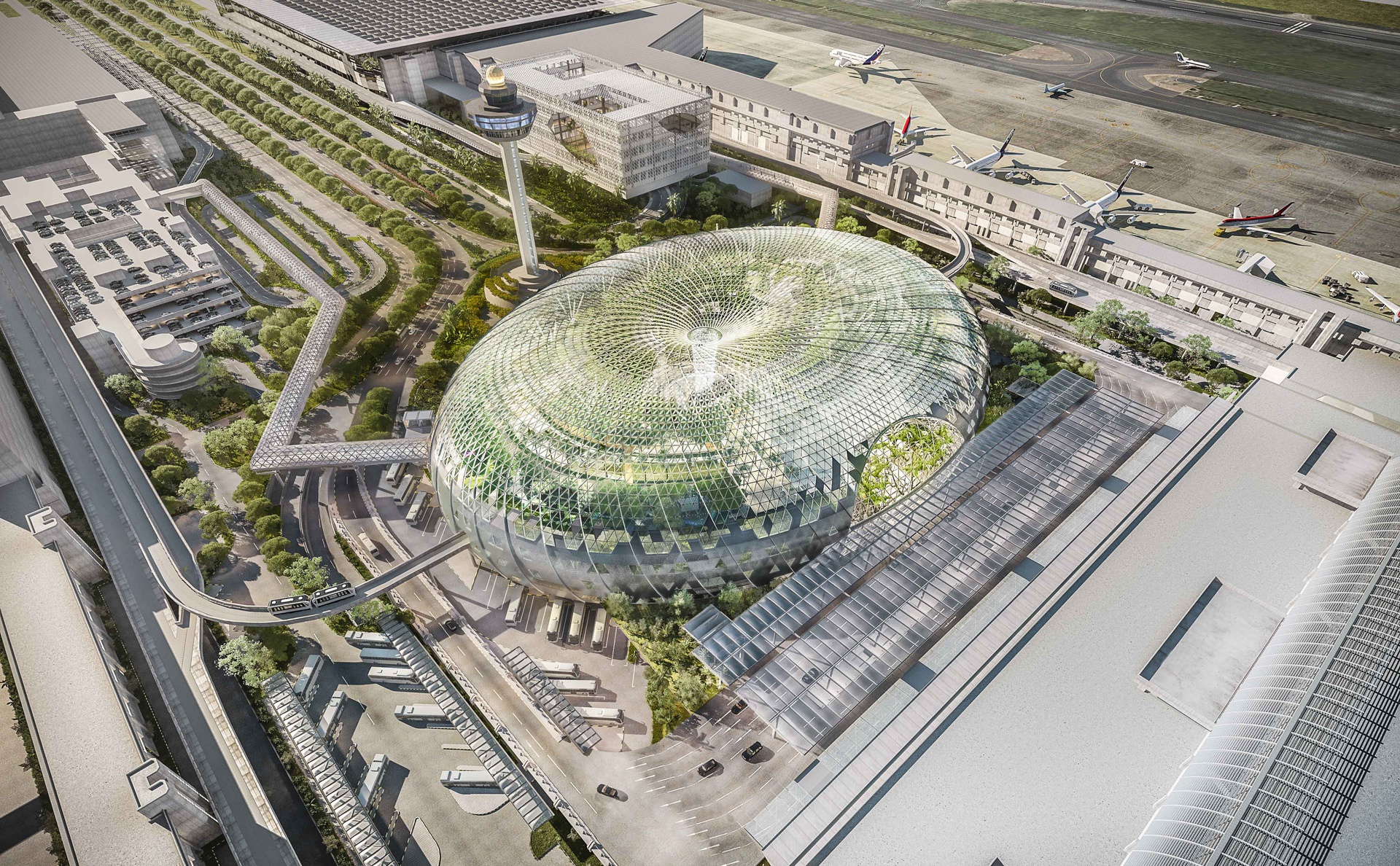 Features include an expansive indoor forest, the world’s tallest indoor waterfall, tree-top walking trails, restaurants, retail, and a variety of gathering places, open to all travellers and the public alike.

Jewel weaves together an experience of nature and the marketplace, dramatically asserting the idea of the airport as an uplifting and vibrant urban center, engaging travelers, visitors, and residents, and echoing Singapore’s reputation as ‘The City in the Garden.’ –Moshe Safdie

Designed by Safdie Architects, Jewel Changi Airport, the newest development at Singapore’s award-winning Changi Airport, will commence a phased opening in April 2019. Jewel Changi Airport combines an intense marketplace and a paradise garden to create a new center – “the heart and soul” of Changi Airport. Once open, Jewel will establish a new paradigm for community-centric airport design, extending the airport’s principal function as a transit hub to create an interactive civic plaza and marketplace, combining landside airport operations with expansive indoor gardens and waterfall leisure facilities, retail, restaurants, and a hotel as well as other spaces for community activities.

Linked to the city’s public transportation grid and with open access to Terminal 1, and to Terminals 2 and 3 via pedestrian bridges, Jewel engages both in-transit passengers as well as the public of Singapore. Entirely publicly accessible, the 134,000-square-meter (144,000 sq.ft.) glass-enclosed toroidal building asserts a new model for airports as a destination for community activity, entertainment, and shopping. “Jewel presents a new building prototype for connecting the city and the airport,” said Jaron Lubin, Principal at Safdie Architects. “Like an Ancient Greek ‘agora,’ it aligns social and commercial values to create an animated public realm destination.”

To create an airport experience unlike any other, Safdie Architects integrated spatial and interactive experiences throughout a lush indoor garden and a five-level retail marketplace. The core of Jewel is the Forest Valley, a terraced indoor landscape featuring walking trails and quiet seating areas set amongst more than 200 species of plants. The Rain Vortex, the world’s tallest indoor waterfall, showers down seven stories from a central open oculus in the domed roof, compelling visitors with dramatic cascades during the day and performance light and projection experiences by night. During the region’s frequent and powerful thunderstorms, recirculated, natural rainwater will flow at more than 10,000 gallons per minute, which helps provide cooling and airflow in the landscape environment, collecting significant rainwater to be re-used in the building.

Jewel is slated to receive a Platinum rating from Singapore’s GreenMark program for environmentally sustainable buildings. An integrated system of glazing, static and dynamic shading, and an innovative and efficient displacement ventilation system was developed to achieve the required level of comfort for a diversity of activities, as well as to sustain the vast array of plant life.

On the fifth level is the Canopy Park, which includes 14,000 sq.m. of attractions integrated within the garden spaces such as net structures suspended within the trees, a suspended catenary glass-bottom bridge walk, a planted hedge maze and mirror maze, and feature installations completed in collaboration with internationally acclaimed artists. The highly immersive features are designed to be both aesthetic and functional, providing pathways for traversing the space while delighting visitors with gorgeous sightlines, providing spaces for interpersonal interaction and community building, and creating a sense of wonder and discovery. Additional highlights include a topiary walk, horticultural displays, and an event plaza for 1,000 people.

Connection to the City and the World

Conceived to serve the people of Singapore and travelers equally, the building is directly connected to the Changi Bus Terminal and the airport’s Terminal 1. It is also accessible from Terminals 2 and 3 via pedestrian bridges, and the interterminal train crosses through the gardens, giving visitors with limited time a glimpse into the Forest Valley. The retail galleria, featuring more than 280 retail and food and beverage outlets and a 130-room hotel, develops the foundation of Jewel’s one-of-a-kind integration of marketplace and garden.

To realize this groundbreaking vision, Safdie Architects brought together and led a global collaboration of the best minds in the fields of engineering, landscape architecture, water feature design, interior design, and art. Working together towards this common vision, the concepts of Jewel were developed and implemented.

BuroHappold engineered Jewel’s steel structure and developed the building’s façade systems. The team took on the never-seen-before glass and steel roof structure which spans more than 200 meters (650 feet) at its widest point, with only intermittent supports in the garden which results in a near column-free interior. The geometry of the roof is based on a semi-inverted toroid, or donut, with an indoor rain-fed waterfall at its center. BuroHappold worked with the team and specialist sub-contractor MERO to develop the ‘Jewel node,’ the precision steel connectors which make up the diagrid roof system. The components were prefabricated in Germany and bolted together on site in Singapore.

To balance the thermal comfort for inhabitants of the building with the complex needs of the great diversity of planting, Atelier Ten Environmental Design Consultants developed the climate control, daylighting, and environmental systems as an integrated whole.

RSP’s role in Jewel encompassed the statutory, contractual, and design development efforts, working in close collaboration with Safdie Architects’ Boston and Singapore offices. RSP were entrusted to administer the building contract between the client and main contractor.

PWP Landscape Architecture worked closely with the team to shape and develop the lushly landscaped Forest Valley, and led the design of the gardens at Jewel, including Canopy Park. To create the first climate-controlled, indoor forest, PWP carefully selected plant life that would thrive within the targeted interior conditions and create a viable and vital garden without draining resources. PWP collaborated with Singapore-based ICN to develop and deliver the landscape design.

WET engineered the Rain Vortex at the center of the Forest Valley garden. Utilizing their unique choreography and experience design expertise, they developed a system that integrates sounds with projections from 360 degrees around the vortex to enable nightly light shows upon the waterfall.

Benoy collaborated with the team to design the unique and dynamic retail identity for the project. The interiors navigate the many interfaces between aviation facilities and the retail center. Benoy also designed the Meeter-Greeter Hall, which is the key interface with Terminal 1.

Pentagram, working in collaboration with Entro, designed a comprehensive program of signage and wayfinding for Jewel Changi Airport, as well as the signage connecting to the other terminals at Changi. The signage is integrated with the architecture to create a system of way-finding that references the project’s urban character and works together to guide travelers.