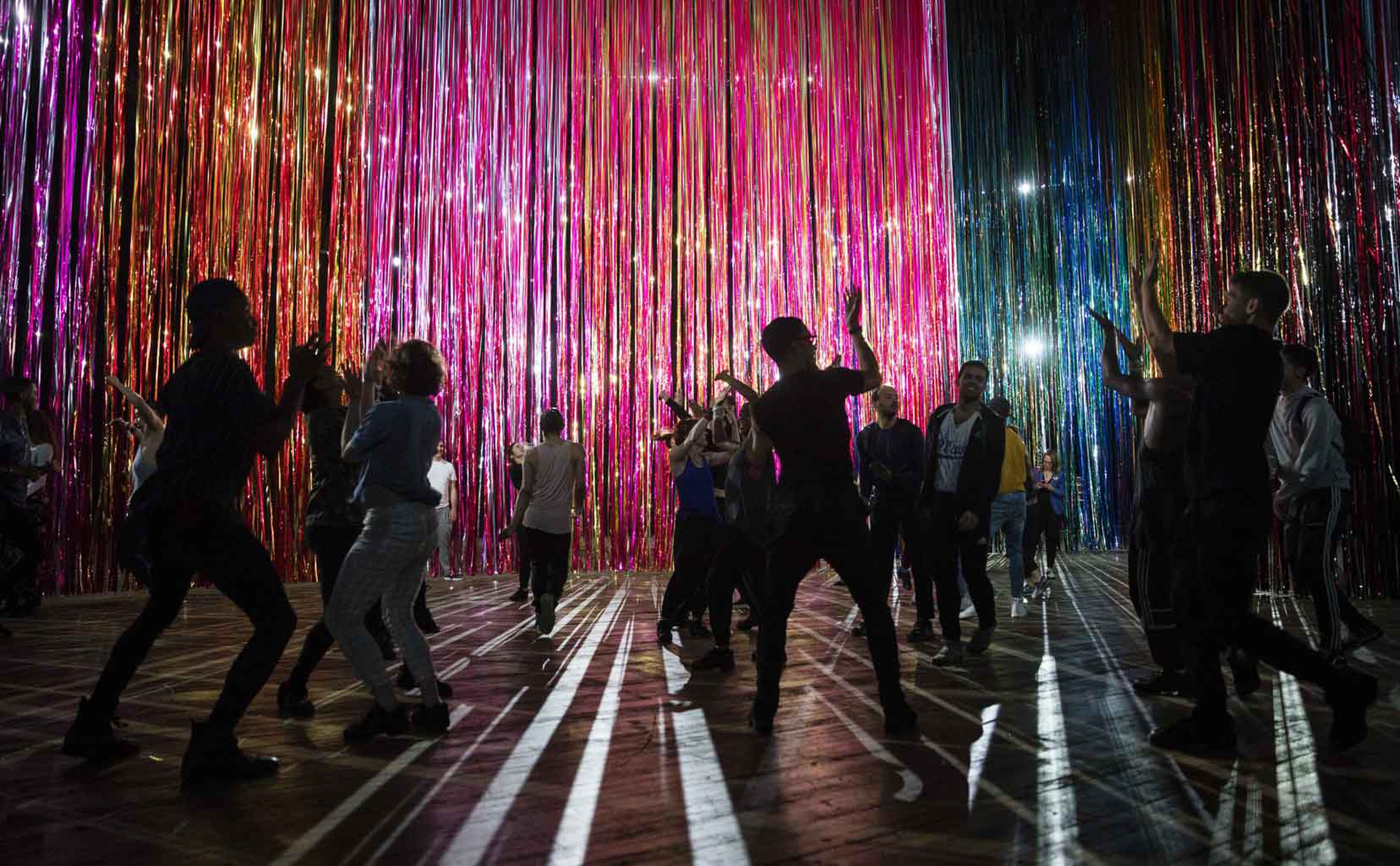 Animating Park Avenue Armory with the sights, sounds, and movement of renowned interdisciplinary artist Nick Cave, The Let Go transforms the Armory’s Wade Thompson Drill Hall into a dance-based town hall that brings together visitors to participate in a collective act of catharsis. The Armory’s 2018 visual arts commission builds on Cave’s hybrid, multisensory practice with an ambitious project—encompassing performance, installation, dance-based encounters, and soundtracks by some of New York’s leading DJs—that provides a backdrop for audiences to dispel negativity and uplift one another. On view June 7 through July 1, 2018, The Let Go features a series of soundsuits—wearable sculptures that create a second skin to conceal race, gender, and class, that come to life in a new “Up Right” performance conceived for the Armory’s historic interiors.

“In today’s tumultuous world, Nick’s artistic vision and desire to build understanding through dance are more vital than ever,” said Rebecca Robertson, Founding President and Executive Producer of Park Avenue Armory. “By harnessing and cultivating the power of community, this commission serves as a spirited reminder of our shared humanity. We look forward to reconnecting audiences from across all five boroughs with the world of Nick Cave in his first major project to be mounted in the city since HEARD•NY.”

The Armory’s Drill Hall takes on a dance-hall atmosphere by immersing visitors within Cave’s newest installation, comprising two kinetic, 40-foot-tall, multi-colored Mylar sculptures referencing social justice issues that express the sense of freedom and self-expression one gets when they “let go” on the dance floor. Through a series of daytime happenings, visitors and community organizations such as yoga practitioners, hula-hoopers, church choirs, and student groups are invited to come together to express themselves through movement and work out frustrations to music curated by some of New York’s leading DJs, both as a recorded soundtrack and spun live from a sculptural DJ tower conceived by Cave. Participants are engaged by dancers leading games of Twister, Soul Train lines, a special line dance called “The Let Go” created for the installation, soundsuit invasions, and other dance-based encounters such as “chase,”: two ever-gliding curtains corral visitors and sweep across the dance floor. Renowned choreographer Francesca Harper, together with Cave, have choreographed the dancers to engage visitors in the Drill Hall. Cave is also curating an evening of site-specific performative responses by Nona Hendryx, Helga Davis, Francesca Harper, and Reggie Gray and the D.R.E.A.M. Ring that takes place within the installation on June 26, 2018. In the head house, a site-specific presentation of Cave’s Up Right soundsuits are on display in the Armory’s historic period rooms. Composed of vintage objects including sequined garments and holiday decorations as well as synthetic hair, raffia, and hand-strung beads, the wearable sculptures evoke a multiplicity of meanings ranging from the spiritual to the carnivalesque.

On weekday evenings, Cave orchestrates a cast of dancers in his signature Up Right performances that activate the soundsuits and are accompanied by baritone Jorell Williams and Vy Higginsen’s Sing Harlem Choir. “Practitioners” commence the ceremonies by transferring the soundsuits to the Drill Hall. There they will dress “initiates,” a ritual act of disassembling and resculpting the soundsuits on the body, piece by piece. This physical transformation represents a cleansing of mind, body, and spirit that empowers the initiate to assert their selfhood and forge their own path. In a grand procession around chase, the initiates come together to perform new site-situated choreography by Francesca Harper that celebrates independence and self-determination.

“Throughout his career, Nick has challenged traditional conceptions of visual art to create new forms of expression that pervade the hearts and minds of audiences,” said Pierre Audi, Artistic Director of Park Avenue Armory. “As an institution that embraces interdisciplinary concepts that defy expectations, it is fitting that we welcome Nick to our roster of artists who have drawn upon the unique setting of the Armory to develop new narratives in their work.”

“The Let Go is a testament to Nick’s unwavering commitment to uplifting communities and affecting change through art. His participatory performances have become some of the most beloved experiences to be found in the contemporary art landscape today,” said Tom Eccles, curator of The Let Go. “It is exciting to bring his energy and aesthetic to the Armory, creating a project that includes all New Yorkers in its realization.”