Norton Museum of Art Celebrates Collection Gift in From Hassam to Wyeth: Gifts from Doris and Shouky Shaheen 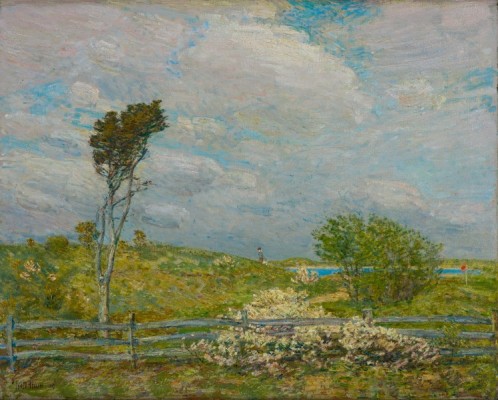 he Norton Museum of Art will open From Hassam to Wyeth: Gifts from Doris and Shouky Shaheen (December 10, 2021 – May 1, 2022), featuring major oil and watercolors from American artists in the late 19th- to mid 20th-centuries, gifted to the Norton in 2020. The exhibition is the first in a series highlighting private collections that will open at the Norton this winter, illustrating the depth of its community of art collectors. The works from the Shaheen gift will be shown alongside the Norton’s exhibition, Jane Peterson: Impressions of Light and Water (December 18, 2021 – June 12, 2022). With the works already on view in the museum’s American galleries, these shows demonstrate the museum’s deep holdings of American Impressionist painting.

“From Hassam to Wyeth celebrates the remarkable generosity of Doris and Shouky Shaheen to the Norton Museum of Art,” said Ghislain d’Humières, Director and CEO of the Norton Museum of Art. “Their gift of incomparable American paintings by some of the most well-known artists of the time deepens and strengthens the Norton’s holding of American art. We are pleased to place this gift on view at the Norton which, together with our Jane Peterson exhibition, will provide visitors with an exploration of the American landscape in the late 19th and early 20th centuries.”

From Hassam to Wyeth: Gifts from Doris and Shouky Shaheen showcases the couple’s gift of 12 American works to the Norton. In addition to Childe Hassam and Andrew Wyeth, artists represented include William Glackens, Jane Peterson, Edward Henry Potthast, John Henry Twachtman, Guy Wiggins, and Wyeth’s son, Jamie. Ranging in style from impressionism to realism, the works demonstrate how American painters continued to focus on landscapes that demonstrated the continuities between past and present, even in this era of major social change.

Shouky Shaheen and his late wife, Doris, began to amass their remarkable collection in the early 1970s. Over the course of 50 years, the collection has grown to include paintings by some of the most recognized American and European artists of the late 19th and early 20th centuries. Seasonal residents of Palm Beach, the couple have a long history of philanthropic support for organizations across the Southeast, particularly tied to the arts, healthcare access, and education. “We are so grateful to the Shaheens for these important gifts,” said Ellen Roberts, the Norton’s Harold and Anne Berkley Smith Curator of American Art. “They expand the museum’s American collection in exciting ways, allowing the us to introduce new artists and new themes into our galleries.”

Jane Peterson: Impressions of Light and Water celebrates the Norton’s strong collection of work by American Impressionist Jane Peterson. Peterson was a leading figure in the early Palm Beach art community beginning in the 1910s and continued to depict the area’s tropical landscape for the next 40 years. Her masterful rendering of the brilliant South Florida sun contrasts with her evocation of sites in Europe, especially the silvery atmosphere of her favorite place, Venice. The Norton’s eight oils and watercolors demonstrate Peterson’s success as an Impressionist who could perfectly capture a particular place and time

In accordance with recommendations by the CDC, the Museum is maintaining limited capacity, requiring visitors to wear masks and provide proof of a negative COVID-19 test taken with 72 hours/show voluntarily show proof of COVID-19 vaccination. All visitors must reserve timed tickets in advance. For full details on the Museum’s health and safety protocols, please visit Norton.org/visit.

About the Norton Museum of Art

The Norton Museum of Art is home to the leading and most far-ranging collection of art in Florida and the region, with distinguished holdings in American, European, Contemporary, and Chinese art and Photography. In 2019, the Norton unveiled an expansion by Foster + Partners, featuring the new 59,000-square-foot Kenneth C. Griffin Building, which greatly enhanced the Museum’s facilities and was accompanied by the complete reinstallation of the museum’s renowned collections in state-of-the-art galleries.

The Norton is also recognized for advancing the practice and appreciation of emerging and under-recognized artists. In 2011, the Norton launched RAW (Recognition of Art by Women). Since its inception, the series has presented the work of Jenny Saville, Sylvia Plimack Mangold, Phyllida Barlow, Klara Kristalova, Nina Chanel Abney, Njideka Akunyili Crosby, Svenja Deininger, and María Berrío. In January 2019, the Museum launched an artist-in-residence program, which hosts four artists annually who are in residence on-site in restored homes that border the Museum’s campus. This year, María Berrío was in residence during the presentation of her first museum survey, and photographer Jessica Ingram, whose publication Road Through Midnight was recognized by the New York Times, returned to participate after being forced by the pandemic to cut short her planned 2020 residency.

The expansion of the Norton also provided new and enhanced facilities for its educational programs, special exhibitions, lectures, tours, and other activities that serve the Museum’s diverse audiences. It also transformed the Norton’s 6.3-acre campus into a “museum in a garden” which celebrates the beautiful year-round weather in West Palm Beach and features new, verdant public spaces and a 37,000-square-foot sculpture garden.

Norton Museum of Art Celebrates Collection Gift in From Hassam to Wyeth: Gifts from Doris and Shouky Shaheen