Major Exhibition of Mexican Modernism Showcases Masterpieces and Marks Museum’s Largest Presentation of Works by Kahlo and Rivera, with Special Programs and Symposium 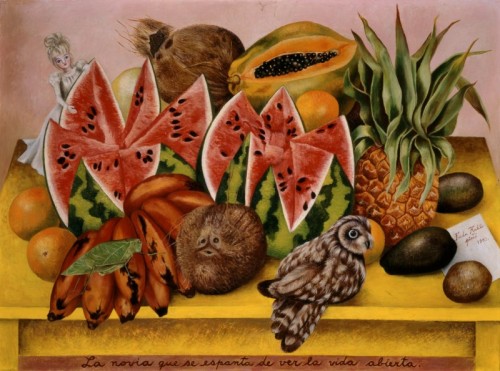 This month, the Norton Museum of Art will present Frida Kahlo, Diego Rivera and Mexican Modernism from the Jacques and Natasha Gelman Collection, on view from October 23, 2021-February 6, 2022. Featuring over 150 works, including paintings and works on paper collected by Jacques and Natasha Gelman alongside photographs and period clothing, the exhibition includes the largest group of works by Frida Kahlo and Diego Rivera ever on view at the institution. Presenting these artists’ creative pursuits in the broader context of the art created during the renaissance following the end of the Mexican Revolution in 1920, the exhibition also includes work by Manuel and Lola Álvarez Bravo, Miguel Covarrubias, Gunther Gerzso, María Izquierdo, Carlos Mérida, David Alfaro Siqueiros, Juan Soriano, and Rufino Tamayo. It explores these artists’ distinctive interpretations of modernism as expressed in themes of nature, home, and family in photographs and easel and large-scale mural paintings.

Frida Kahlo, Diego Rivera and Mexican Modernism is organized by the Vergel Foundation and MondoMostre in collaboration with the Instituto Nacional de Bellas Artes y Literatura (INBAL). It is curated by the Vergel Foundation curator, Magda Carranza de Akle, and for the Norton by Ellen E. Roberts, Harold and Anne Berkley Smith Curator of American Art.

The Museum will mount a series of public and member programs will complement the exhibition, with Nelson-Atkins Museum of Art Director Julián Zugazagoitia holding an opening lecture for members. Throughout the exhibition, the Norton will host both remote and in-person programs, including curator conversations, art making, book discussions, and special tours.

To conclude the exhibition’s run at the Norton, the museum will present a symposium on January 22. Led by Roberts, Modernism in Mexico will include panel conversations with Mary Coffey, Professor of Art History, Dartmouth College; Ramón Favela, Research Professor Emeritus, UC Santa Barbara; Anna Indych-López, Associate Professor, City College and the Graduate Center, CUNY; and Stephanie Weissberg, Associate Curator, Pulitzer Arts Foundation. A full list of programs follows on the second page, and additional details can be found at Norton.org.

“Frida Kahlo, Diego Rivera and Mexican Modernism is among the largest exhibition of Mexican art that we’ve ever presented,” said Ghislain d’Humières, Director and CEO of the Norton Museum of Art. “We are thrilled to have the opportunity to exhibit works by esteemed artists Frida Kahlo and Diego Rivera in the context of their peers and in conversation with our collection. Beyond presenting outstanding art, this exhibition reflects the relationships and tastes that the Gelmans shared with the artists in their orbit. Offering audiences the chance to view these works through the lens of their collection, the exhibition suggests fresh modes of experiencing beloved works of art.”

In conjunction with this exhibition, the Norton will launch Guía, an eight week-long bilingual docent training program for students from the local John I. Leonard High School. Participants will learn to facilitate conversations with exhibition visitors and sharpen their visual literacy and public speaking skills. After the eight-week program, students can lead tours of the exhibition in Spanish.

A companion exhibition titled Frida and Me, curated by Assistant Curator Rachel Gustafson, will present a selection of works that respond to and are inspired by Kahlo’s works and practice. Additional related programming will be announced in the coming months.

October 22: Curator Conversation: Frida and Me

November 4: Book + Art: A Mashup for Book and Art Lovers!

Read the book in advance, then join other guests and Museum and Library staff for a book discussion and talk on a related artwork. Celia Stahr, Frida in America, The Creative Awakening of a Great Artist, 2020 + artworks in the special exhibition, Frida Kahlo, Diego Rivera and Mexican Modernism: From the Jacques and Natasha Gelman Collection.

Children ages 5-12, and their accompanying grown-ups, participate in a gallery experience, followed by a related art workshop. Explore the special exhibition Frida Kahlo, Diego Rivera and Mexican Modernism: From the Jacques and Natasha Gelman Collection and gather inspiration to create lively works of art that celebrate Mexican culture and art.

Join visiting Armory Art Center instructors who will introduce you to a new artistic media. Activities will take inspiration from the Norton’s Collection and special exhibitions. Mixed Media + Collage related to works in the special exhibition, Frida Kahlo, Diego Rivera and Mexican Modernism: From the Jacques and Natasha Gelman Collection.

In accordance with recommendations by the CDC, the Museum is maintaining limited capacity and requiring visitors to wear masks and reserve advanced, timed tickets. As of October 1, all visitors are required to show proof of a negative COVID-19 PCR test taken within 72 hours; or a negative COVID-19 Antigen Rapid Test conducted within 24 hours; or voluntarily show proof of COVID-19 vaccination (together with a valid photo ID). For more information, please visit https://www.norton.org/visit/covid-19.

Jacques Gelman and his wife Natasha built strong relationships with leading figures of the artistic movement that had arisen after the Mexican Revolution. The Gelman Collection consists primarily of works the couple acquired from modernist friends in this period. Gelman was a film producer during the Golden Age of Mexican cinema in the mid-twentieth century and he and his wife’s close bonds with Mexico’s creative community are underscored by the numerous portraits of them made by friends featured in the exhibition.

Frida Kahlo and Diego Rivera are among the most influential figures of Mexican art in this period, known for their creative synergy with each other along with their personal relationship. Frida Kahlo, Diego Rivera and Mexican Modernism emphasizes the connections between Kahlo, Rivera, and their contemporaries’ collective experimentation with modernism. Featuring 22 paintings and works on paper by Kahlo and 18 paintings, works on paper, and aquatints by Rivera, the exhibition addresses the artists’ private experience with each other and situates their work in the larger history of modernism in Mexico, a narrative enhanced with portraits and photographs of the couple by artist friends and peers. Sections of the exhibition address the resonance and exchange of influence evident in the two artists’ work, along with Kahlo’s struggles with lifelong chronic pain induced by a childhood battle with polio, and a bus accident that shattered her pelvis and spine at 18 years old.

Tracing the influence of Mexicanidad, the belief that Mexicans could create an authentic modernism by exploring the country’s indigenous culture, the exhibition reveals the centrality of this idea to Kahlo’s iconography, manifested as a distinctive brand of magical realism colored by Mexican folk art. Even her adoption of traditional Tehuana clothing reflected Kahlo’s desire to establish a connection with ancestral Mexico while expressing a cross-cultural identity that honored her heritage and status as a modern woman. A selection of period vintage dresses sourced in Mexico, which include colorful embroidered blouses and full skirts, will be on view in the exhibition, enriching the presentation’s examination of her art in the context of her life and persona.

“This exhibition offers viewers the opportunity to see beloved works by Frida Kahlo and Diego Rivera in-person and experience the physical impact of their creative vision,” said Ellen E. Roberts, Harold and Anne Berkley Smith Curator of American Art. “The scope of Frida Kahlo, Diego Rivera and Mexican Modernism returns major works of Mexican Modernism to the context in which they were produced—in a collaborative artistic community seeking to make an authentically Mexican modern art by exploring and embracing shared roots and folkloric traditions. It will be especially exciting to have the exhibition on view at the Norton, since these works have such resonance with the masterpieces of American and European modernism in the museum’s collection.”

Notable works in the exhibition include:

The Norton’s presentation of Frida Kahlo, Diego Rivera and Mexican Modernism from the Jacques and Natasha Gelman Collection is designed by Brooklyn-based architecture firm Matter Practice.

The Exhibition is organized by the Vergel Foundation and MondoMostre in collaboration with the Instituto Nacional de Bellas Artes y Literatura (INBAL).

About the Norton Museum of Art

The Norton Museum of Art is home to the leading and most far-ranging collection of art in Florida and the region, with distinguished holdings In American, European, Contemporary, and Chinese art and Photography. In 2019, the Norton unveiled an expansion by Foster + Partners, featuring the new 59,000-square-foot Kenneth C. Griffin Building, which greatly enhanced the Museum’s facilities and was accompanied by the complete reinstallation of the museum’s renowned collections in state-of-the-art galleries.

The Norton is also recognized for advancing the practice and appreciation of emerging and under-recognized artists. In 2011, the Norton launched RAW (Recognition of Art by Women). Since its inception, the series has presented the work of Jenny Saville, Sylvia Plimack Mangold, Phyllida Barlow, Klara Kristalova, Nina Chanel Abney, Njideka Akunyili Crosby, Svenja Deininger, and María Berrío. In January 2019, the Museum launched an artist-in-residence program, which hosts four artists annually who are literally in residence in restored homes that border the Museum’s campus. This year, María Berrío was in residence during the presentation of her first museum survey, and photographer Jessica Ingram, whose publication Road Through Midnight was recognized by the New York Times, returned to participate after being forced by the pandemic to cut short her planned 2020 residency.

The expansion of the Norton also provided new and enhanced facilities for its educational programs, special exhibitions, lectures, tours, and other activities that serve the Museum’s diverse audiences. It also transformed the Norton’s 6.3-acre campus into a “museum in a garden” which celebrates the beautiful year-round weather in West Palm Beach and features new, verdant public spaces and a 37,000-square-foot sculpture garden.