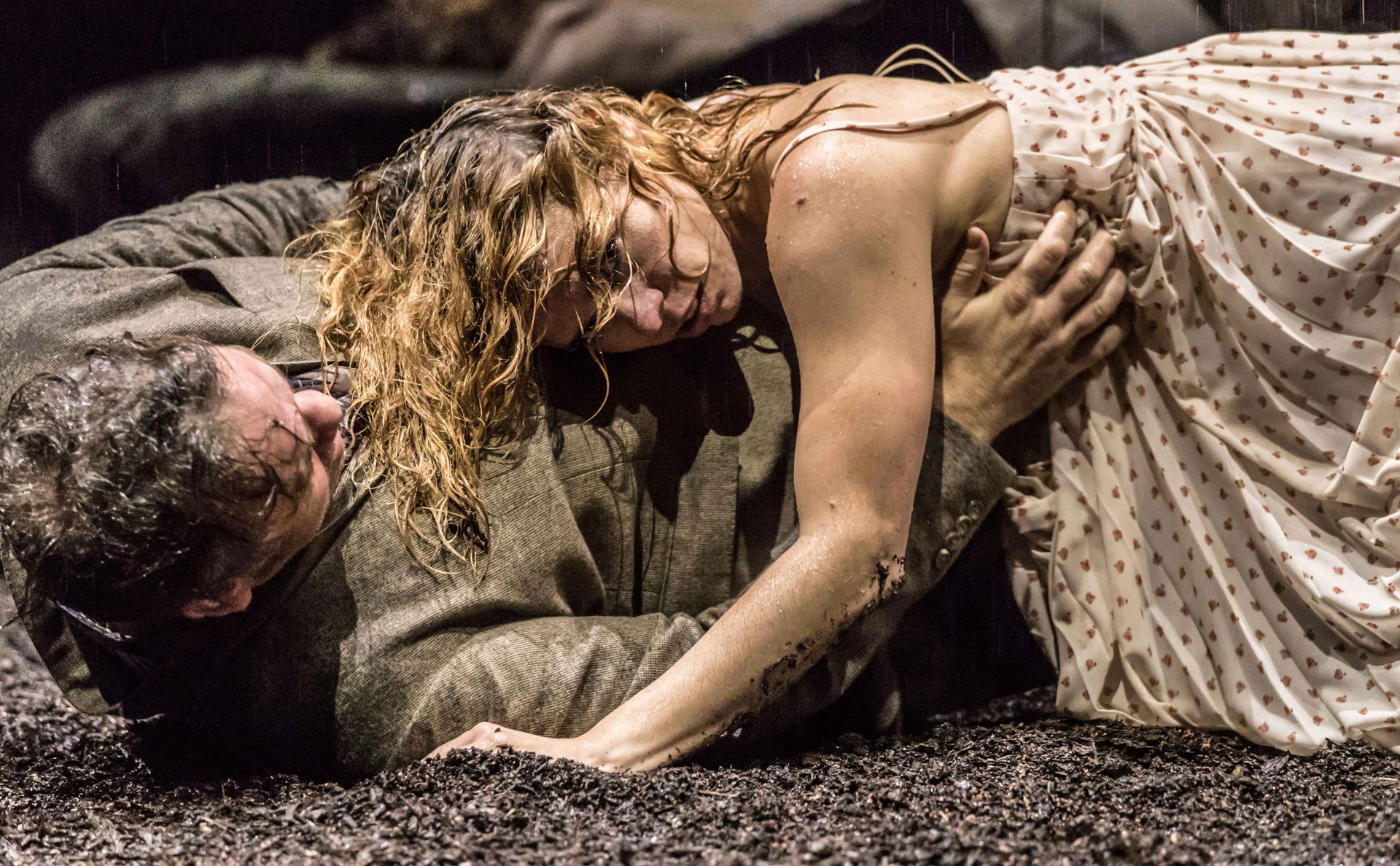 • The Let Go, an ambitious new Armory commission by contemporary artist Nick Cave, who will create a dance-based town hall to which disparate communities of New Yorkers are invited to come together and “let go”

• North American premiere of director Ivo van Hove’s acclaimed stage adaptation of The Damned, a chilling and topical rumination on moral corruption in politics and society, performed by the Comédie-Française in their first New York appearance in more than a decade

• William Kentridge’s The Head and the Load, a new Armory commission that will activate the full expanse of the Wade Thompson Drill Hall with an installation and musical theater performance that examines the more than two million Africans that served in the First World War

• A new line-up of intimate performances in the Armory’s historic period rooms as part of the ongoing Artists Studio and Recital Series programs, featuring Isabel Leonard, Nadine Sierra, Matana Roberts, and Juliana Huxtable, among many others

• Interrogations of Form, a series of conversations and salons that bring together thought leaders and artists across the cultural spectrum to lead multifaceted explorations of issues of our time

Park Avenue Armory announced its 2018 season featuring cross-disciplinary work by some of the most inventive artistic voices working today—from visionary directors making their U.S. debuts, to artists making cutting-edge productions that propel their practice in radical new directions. The new season mines the possibilities of the Armory’s unconventional setting and includes the North American premieres of two acclaimed award-winning theater productions, adapted for the Wade Thompson Drill Hall and directed by directorial wunderkinds Simon Stone and Ivo van Hove respectively; two major site-specific works by multidisciplinary artists Nick Cave and William Kentridge; and the North America premiere of a new dance set to Bach’s Brandenburg Concertos, choreographed by Anne Teresa de Keersmaeker and performed by B Rock Orchestra. Alongside its drill hall productions, the season also includes intimate performances of everything from jazz and lieder, to musical theater and contemporary rhythms that are in direct dialogue with the Armory’s historic interiors.

“The 2018 season offers some of our most complex programming to date, including world-class theater productions, new commissions from multi-disciplinary artists that re-imagine the audience experience and expand the definition of traditional art forms, as well as a new production that continues the Armory’s tradition of illuminating musical masterpieces through immersive stagings,” said Rebecca Robertson, President and Executive Producer of Park Avenue Armory, “With 2018 marking the beginning of the Armory’s second decade of programming, we are proud to expand our strong commitment to reach diverse audiences with a line-up of thought-provoking works that explore the endless potential of our building as a space for artistic experimentation.”

The North American premiere of Yerma will kick off the Armory’s drill hall programming in March 2018, marking the New York debuts of director Simon Stone and Olivier Award-winning actress Billie Piper in a radical reinterpretation of Federico García Lorca’s 1934 tragedy about a woman’s desperate pursuit to bear children. Set in the present day, Yerma exposes the perils of a life lived online and transforms the audience into voyeurs as they scrutinize the action taking place on stage through a glass encasement. In May, Oneohtrix Point Never will fill the Drill Hall with a new site-specific “concertscape” that posits a hyper-future world conceived by alien intelligence. The multimedia installation gives form to the music itself, exploring the relationship between space and sound in deliberate exchange with the audience.

In June, visual artist Nick Cave takes over the Armory’s Wade Thompson Drill Hall and head house with a new commission that invites the public and organizations, ranging from church groups to business interns, to participate in a collective act of catharsis. Featuring a series of DJs and performers, The Let Go engages visitors in a daytime dance celebration in an installation created for the Armory’s historic building. The festivities will continue in the evening with Up Right performances and artistic responses that empower the community to do away with negativity and uplift one another. July marks the North American premiere of The Damned by Tony Award-winning director Ivo van Hove, whose timely adaptation of Luchino Visconti’s 1969 screenplay examines the formation of vicious alliances between financial interests and extremist political actors. Marking the first New York performance by the Comédie-Française in over a decade, the production will be presented in the Armory’s vast industrial drill hall, whose military history will provide a powerful backdrop to this dark tale of moral corruption.

Fall 2018 will bring choreographer Anne Teresa De Keersmaeker to the Armory for the North American premiere of The Six Brandenburg Concertos, an evening-length work set to Bach’s concertos performed by conductor Amandine Beyer and the baroque musical ensemble B’Rock Orchestra in their North American debut. The season concludes with the North American premiere of the most ambitious work to date by artist William Kentridge. Co-commissioned by the Armory and 14-18 NOW, the UK’s arts program for the First World War centenary, The Head and the Load fills the Armory’s Wade Thompson Drill Hall with a continuous musical procession composed by Philip Miller and musical director Thutuka Sibisi that mixes high modernism with traditional African choral styles and American jazz, in a monumental landscape environment by Kentridge that gives voice to more than two million African porters and carriers serving the British, French, and German military forces during the First World War.

“We are excited to build on our history of forging partnerships with leading artists across a spectrum of creative fields to realize unprecedented works that defy audience expectations,” said Pierre Audi, the Armory’s Artistic Director. “From jubilant artistic expressions that celebrate our shared humanity, to deep ruminations on challenging narratives, the 2018 season is filled with unconventional productions and installations that will invigorate the New York cultural landscape.”

Throughout the year, the Armory will present a roster of intimate performances, lectures, artist talks, and educational programs in the jewel-like interiors of its historic Head House. The Board of Officers Room provides a home for chamber music concerts through the Armory’s Recital Series, while the Veterans Room hosts a contemporary, eclectic mix of music and performance by experimental artists as part of the Artists Studio, curated by Jason Moran. The 2018 Artists in Residence—including playwright Branden Jacobs-Jenkins and performance artist Carmelita Tropicana; set designer and director Christine Jones; performance artists Malik Gaines and Alexandro Segade; choreographer Reggie Gray and his company the D.R.E.A.M. Ring; playwright Lynn Nottage; and installation and performance artist Tania Bruguera—will utilize the Armory’s period rooms to develop their practice through the creation of new works.

Additionally, in February, the Armory will launch the 2018 Interrogations of Form conversation series, convening artists, community, and thought-leaders to engage in a vigorous, multi-dimensional exploration of today’s social and cultural landscape. Dedicated to the year 1968, the symposium will explore through multiple lenses the monumental events that took place and their impact on society and politics over the past 50 years, as well as the promise of the next 50 years.

As part of its educational programming, the Armory will premiere its second commission for young audiences from The Electric Doyenne and the Trusty Sidekick Theater Company, dedicated to boldly reimagining theater and performance-based works for young audiences. Advancing the Armory’s role as an incubator of new works and a leader in arts education, The Mendelssohn Electric represents the second installment in a trilogy of performances highlighting different, prominent yet overlooked women in music history. The project is inspired by the Armory’s building and will be presented to the public in December as well as to students from underserved New York City public schools and their families.