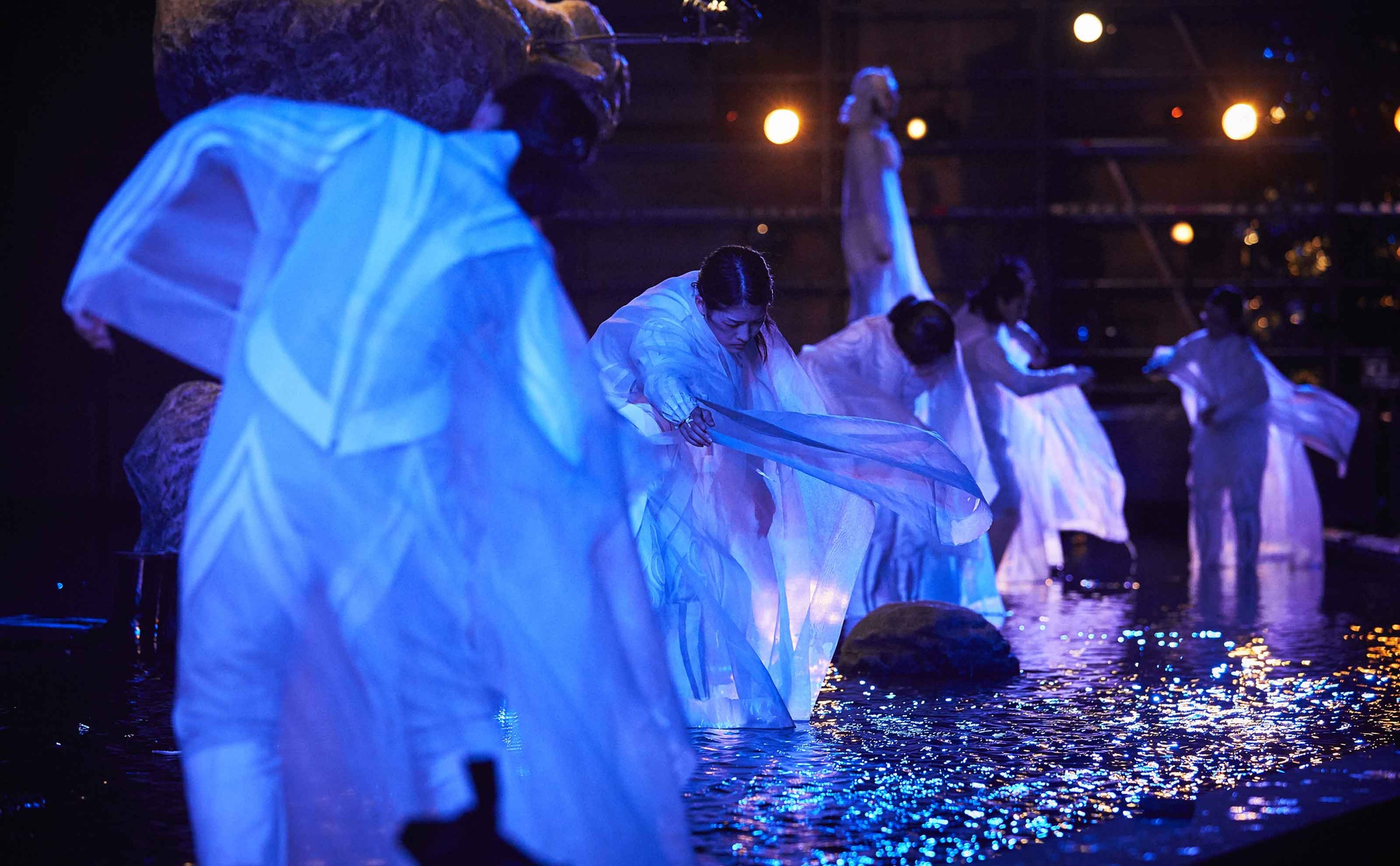 Park Avenue Armory announced its 2019 season, which includes evocative new visual and performing arts commissions along with a timely and eclectic lineup of multidisciplinary world and North American premiere productions and installations. Programmed by Pierre Audi, the Armory’s Marina Kellen French Artistic Director, the 2019 season continues the Armory’s commitment to showcasing some of the most innovative artists from around the world, while sustaining relationships with a community of world-class collaborators. With theater, film, music, visual art installations, spoken word and performative gatherings, and intellectual symposia, each engagement during the season presents a visually captivating aesthetic that both transforms and amplifies the Armory’s Wade Thompson Drill Hall and provides engaging experiences for audiences. Alongside its Drill Hall productions, the season also includes intimate performances in the gorgeous historic reception rooms by virtuoso singers and musicians.

“Showcasing an impressive range of artists and directorial talents, this season presents cutting-edge, issue-driven, new work that highlights some of the most pressing issues of our time,” said Rebecca Robertson, Founding President and Executive Producer of Park Avenue Armory. “The Armory is committed to providing a first platform in New York for powerhouse artists who are making waves around the world, while supporting new projects by artists who have been a part of the Armory community for years. By offering these artists the freedom and inspiration to create their work unencumbered by traditional limitations, we have created a season that mines the myriad possibilities of our historic spaces.”

“While the productions in our 2019 season are all rooted in our contemporary moment, each in its own way invokes the past, reinventing history in a modern context to help reorient the present-day moral compass of our society,” said Pierre Audi, the Marina Kellen French Artistic Director of Park Avenue Armory. “From The Lehman Trilogy, which illuminates the seeds of our financial system and the unlimited opportunity to attain the American Dream, to Drill by Hito Steyerl, which draws upon archival research to explore some of the most pressing social issues of the present day, to Theaster Gates’ Black Artists Retreat, which emerges from the tradition of spirited public-forums of the 1960s, to the socially-relevant adaptation of Judgment Day, an 80-year-old play examining divergent truths, conscience, and consequences, the season illuminates the significant issues the world is grappling with today. Alongside the Drill Hall programming, the Artists Studio and Recital Series re-enliven our historic period rooms with contemporary art and creative practices. We’re looking at the inevitable interplay between past and present, reflecting and revising to help forge paths forward.”

The Armory’s 2019 Wade Thompson Drill Hall programming kicks off in March with the North American premiere of The Lehman Trilogy, a theater work by Stefano Massini, adapted by Ben Power, directed by Sam Mendes, told in three parts in a single evening, tracing nearly two centuries of Lehman lineage, following the brothers Henry, Emanuel, and Mayer Lehman from their 1844 arrival in New York City to the 2008 collapse of the financial firm bearing their name. In a masterclass of acting, Simon Russell Beale, Adam Godley, and Ben Miles play the Lehman brothers and a cast of characters, including their sons and grandsons. As the inaugural production of the 2019 season, The Lehman Trilogy builds on the Armory’s history of presenting bold and engaging theater productions that require vast, untraditional space for their full realization.

In June, composer and director Heiner Goebbels returns to the Armory for the North American premiere of Everything That Happened and Would Happen, a non-linear work commissioned by the Armory. Part-performance, part-construction site, Everything That Happened and Would Happen reconstructs 100 years of history to show a world in strife within the Wade Thompson Drill Hall’s industrial architecture and atmosphere, using moving image, music, sound, and projections to invoke a sensorial and immersive experience that ruminates on the cyclical cycle of societal destruction.

Fall 2019 at the Armory begins with renowned Japanese theater director Satoshi Miyagi, who will bring his multicultural adaptation of Antigone to the Armory in September. For the second time in the Armory’s history, the Wade Thompson Drill Hall will be flooded with water for this version of Sophocles’ tragedy that Miyagi incorporates as an integral part of his production. Large stones scattered throughout the body of water punctuate the setting for the cast of characters who are embroiled in a bitter war of honor. This production reinvigorates this Greek classic with the traditions of Japanese Noh, Indonesian shadow play, and Buddhist philosophy.

To celebrate the completion of the replacement of the wooden flooring lining the Wade Thompson Drill Hall, artist Theaster Gates will host Sonic Soul Session #1, a public celebration with roller skating, DJs and performers, and other special guests among his seven-foot-tall disco-ball glacial sculptures, known as housebergs. The event is part of Gates’ renowned Black Artists Retreat, an artist-led, annual convening of black visual artists designed to facilitate the exchange of ideas and innovation, which will take place in New York City for the first time. Titled Black Artists Retreat 2019: Sonic Imagination, this year’s gathering will examine how sound yields power and explores new ways of infusing artistic practice with the sonic. The event also includes keynote presentations as part of the Armory’s Interrogations of Form series and will include private workshops created specifically for Retreat participants.

Following his critically acclaimed and eight-time Drama Desk–nominated production of The Hairy Ape at the Armory in 2017, director Richard Jones returns in December with Judgment Day. Rounding out the 2019 season, Ödön von Horváth’s 1937 play will come to life through the world premiere of a new adaptation by Pulitzer Prize finalist and Obie Award–winning playwright Christopher Shinn. Jones will stage a new production of the ambitious work which explores morality, responsibility, and guilt of a small town’s train station master and his community. Judgment Day will take on special resonance set in the Wade Thompson Drill Hall—reminiscent of nineteenth century train sheds, with its vaulted ceiling and raw industrial design.

Throughout the year, the Armory will present a roster of intimate performances, lectures, artist talks, and educational programs in the jewel-like interiors of its historic period rooms. The Board of Officers Room provides a home for chamber music concerts through the Armory’s Recital Series, while the Veterans Room hosts a contemporary, eclectic mix of music and performance by experimental artists as part of the Artists Studio, curated by Jason Moran. The 2019 Artists in Residence—including installation and performance artist Tania Bruguera; set designer and director Christine Jones; choreographer Steven Hoggett; and playwright and screenwriter Lynn Nottage—will utilize the Armory’s period rooms to develop their practice through the creation of new works.

Additionally, the Armory continues its Interrogations of Form series, convening artists, community, and thought-leaders to engage in a vigorous, multi-dimensional exploration of today’s social and cultural landscape. This year’s series offers day-long symposia, artist talks, keynotes, installations, performances, and salons that cover a range of relevant topics, including the state of culture in a changing America, the role of citizen artists in politically charged environments, how notions of beauty are evolving in the ballet world, and how the power of spoken word and comedy can help audiences navigate challenging topics.