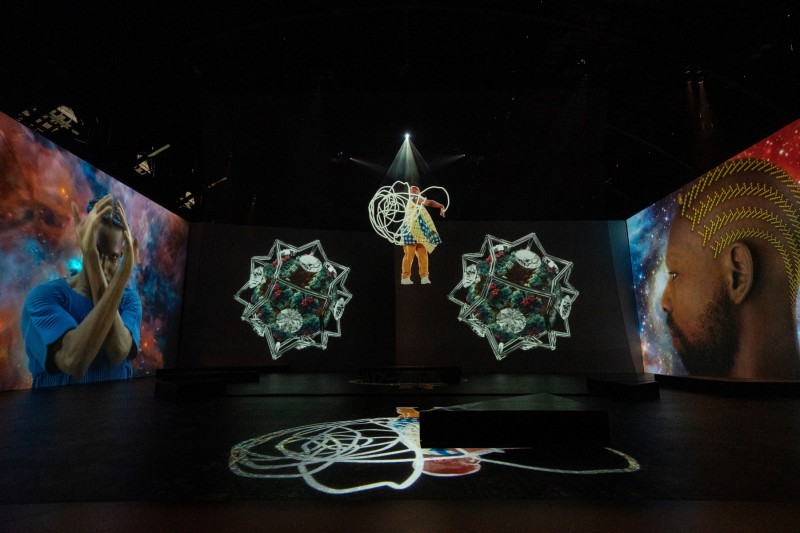 Assembly, a new multi-experiential work by interdisciplinary artist Rashaad Newsome commissioned by Park Avenue Armory, opens today, transforming the Armory’s expansive Wade Thompson Drill Hall into an exhibition space, performance hall, classroom, and theater. Upon entering the Drill Hall, visitors are teleported to an extradimensional universe and greeted by the artist’s artificial intelligence (AI) progeny, Being, The Digital Griot, who models and instructs audiences in reflection, contemplation, movement, and dialogue.

Encompassing many facets of Newsome’s practice, Assembly conjures a monumental immersive environment within the Drill Hall. Visitors encounter video-mapped walls that pulsate with projected imagery of computer-generated diasporic fractals, inspired by Ron Eglash’s scholarship on the use of fractal geometry within traditional and indigenous African culture. These walls encircle a 30-foot-tall hologram sculpture of vogue performers morphing and transforming into one another between dance moves. An adjacent 350-seat theater serves simultaneously as a classroom, arena, and art object, bordered on its south side by Newsome’s collage and sculptural works that merge and mutate images of Black and Black Queer culture, fashion, West African sculptures, textiles, and masks with 19th-century ebony Dutch-style frames.

The nexus of Assembly is Being, Newsome’s nonbinary, non-raced AI progeny, who transcends categorizations while invoking African aesthetics and myth. Being is likened to a Griot—a West African cultural figure who serves as a historian, librarian, performance artist, and healer. Each day, Being leads three “Dance and Decolonization Workshops,” hour-long participatory classes that teach liberation, conversation, and critical thinking through a combination of lecture, dance, storytelling, and meditation. Being’s active approach to education brings new possibilities for reflection and action, and an enhanced academic experience for all people. When not teaching workshops, Being will continuously generate and recite poetry based on the work of queer poet Dazié Rustin Grego-Sykes, and feminist authors and activists bell hooks and Audre Lorde. Being’s recitations will be backed by a soundscape composed by Robert Aiki Aubrey Lowe.

The work flows into nightly performances that investigate and celebrate the many facets of vogue culture in our world, featuring an international collective of dancers, singers, musicians, and MCs alongside Being.

In speaking about his commission, Newsome noted:

Assembly will offer audiences a new way of thinking about rights, liberty, and humanity, using the so rarely explored paradox of the Black experience and the advancement of technology as a jumping-off point. As visitors walk through the exhibition, they will be compelled to consider their relationship to technology and its connections to the culture of domination. They will be given a new lens to see how, historically, the medium of artificial intelligence promises a utopian future, but in reality, serves racial hierarchies and biases.

Despite its apparent suspicion of technology and the future, Assembly is a message of hope and a vehicle for well-being. Technology is our friend and, at best, will only be a mirror for everything we need to update. Through explorations into the connections between quantum energy, Black sociality, and Black liberation movements, one thing becomes clear: the only way we will get to the future is together. This type of beloved togetherness starts with a real reboot.

Political revolution requires processing: we cannot begin to build togetherness without the bandwidth to embrace the moments of tension and conflict as part of the struggle.

Added Rebecca Robertson, the Armory’s Founding President and Executive Producer, “We are proud to present this multifaceted work by Rashaad Newsome, an artist who fearlessly explores institutionalized power structures, the place of AI in the future of humanity, the complexities and glories of African heritage, and Black and Queer culture and the phenomenon of voguing as an act of resistance. His is an entirely modern vision that offers a better future through critical thinking and dialogue.”

“We are so happy to welcome Rashaad back following his Armory debut in our Artists Studio series in 2017,” said Pierre Audi, the Armory’s Marina Kellen French Artistic Director. “Newsome’s work is an ambitious invitation to upgrade our personal operating systems. Through dance, chorus, music, visual art, technology, and scholarship, he has created at the Armory a challenging and fascinating world full of beauty, complexity, and illumination.”

In conjunction with Assembly, the Armory will present Captcha: Dancing, Data, Liberation an artist salon organized by Curator of Public Programming Tavia Nyong'o. Captcha brings Newsome together with several of his collaborators on the project, alongside additional artists and scholars, for a performance showcase previewing the evening sessions and roundtable conversations about the emergence of a Black quantum visual language and the pursuit of personal and collective liberation. The event, which digs deeper into Newsome’s work, will include two roundtables exploring the intersections of Blackness and technology, featuring panelists such as scholar and writer Saidiya Hartman; multidisciplinary artist Kiyan Williams; Afro-Latina, Brooklyn-based MC and activist Ms. Boogie; artist, curator, and composer Robert Aiki Aubrey Lowe; and Newsome himself. It will also include a performance showcase featuring local and international voguers and a special preview of Get Your 10s, an in-process documentary on Newsome and Assembly.

ABOUT RASHAAD NEWSOME
Rashaad Newsome’s work blends several practices, including collage, sculpture, film, photography, music, computer programming, software engineering, community organizing, and performance, to create an altogether new field. Using the diasporic traditions of improvisation, he pulls from the world of advertising, the internet, Art History, Black and Queer culture to produce counter-hegemonic work that walks the tightrope between social practice, abstraction, and intersectionality. Collage acts as a conceptual and technical method to construct a new cultural framework of power that does not find the oppression of others necessary. Newsome’s work celebrates Black contributions to the art canon and creates innovative and inclusive forms of culture and media.

Newsome lives and works between Brooklyn, New York, and Oakland, California. He was born in 1979 in New Orleans, Louisiana, where he received a BFA in Art History at Tulane University in 2001. In 2004, he received a certificate of study in Digital Post Production from Film/Video Arts Inc. (NYC). In 2005, he studied MAX/MSP Programming at Harvestworks Digital Media Arts Center (NYC). He has exhibited and performed in galleries, museums, institutions, and festivals throughout the world, including The Studio Museum in Harlem (NYC), the National Museum of African American History and Culture (DC), the Whitney Museum (NYC), Brooklyn Museum (NYC), MoMAPS1 (NYC), SFMOMA (CA), New Orleans Museum of Art (LA), Centre Georges Pompidou (Paris), The Garage Center for Contemporary Culture (Moscow), and MUSA (Vienna).

INSTALLATION DATES AND PERFORMANCE SCHEDULE
Assembly is on view at Park Avenue Armory February 18 through March 6, 2022.

Tickets at $18 (plus fees); free for Armory members

Workshops have availability at www.armoryonpark.org

Presented in conjunction with Assembly, the Armory will bring Newsome in dialogue with his collaborators and others also engaged in the freedom fight for personal and collective liberation. Through roundtable discussions and a performance showcase, paired with the opportunity to experience Newsome’s world-building taken to new heights in the grand Drill Hall, this salon will take Black visual language on a quantum leap. In addition to Newsome, the salon will include MC and activist Ms. Boogie; dancer and capoeirista Puma Camillê; Aimee Meredith Cox, a dancer and choreographer who is jointly appointed in the departments of African American Studies and Anthropology at Yale; performance artist and poet Dazié Rustin Grego-Sykes; scholar and writer Saidiya Hartman; artist, curator, and composer Robert Aiki Aubrey Lowe; Tavia Nyong’o, the Armory’s Curator of Public Programming; and multidisciplinary artist Kiyan Williams, among others.

HEALTH & SAFETY PROTOCOLS
Beginning January 29, 2022, the Armory will require proof of a booster shot for all those for whom the timing of earlier vaccinations makes them eligible for a booster. Those not yet eligible will be able to continue to enter provided they are two weeks past their second dose in a two-dose vaccine series or two weeks after receiving a single-dose vaccine.

In compliance with New York City’s Key to NYC, effective January 29, 2022, all ticket holders above the age of 5 years old must be fully vaccinated. “Fully vaccinated” means that you received your final dose of an FDA or WHO-approved vaccine at least 14 days before your performance date. At check-in, ticket-holders will be required to show proof of full vaccination (the NEW YORK STATE EXCELSIOR PASS or a hard copy or photo of your vaccination card) and a government-issued photo ID (for ticket holders 18 years of age or older).

In addition to the precautions taken above, all patrons and staff are required to wear masks while inside the Armory (N95, KN95, or KF94 masks are encouraged).

Assembly is supported in part by a generous gift from Ken Kuchin and Tyler Morgan. The program is also supported by Meta Open Arts.

Being was made possible in part with the generous support of the Stanford Institute for Human-Centered Artificial Intelligence.