Addressing critical infrastructure needs of the cutting-edge cultural venue, the project replaces the 138-year-old original wood floorboards of the Armory’s 55,000-square-foot drill hall with wood reclaimed from buildings around the U.S. 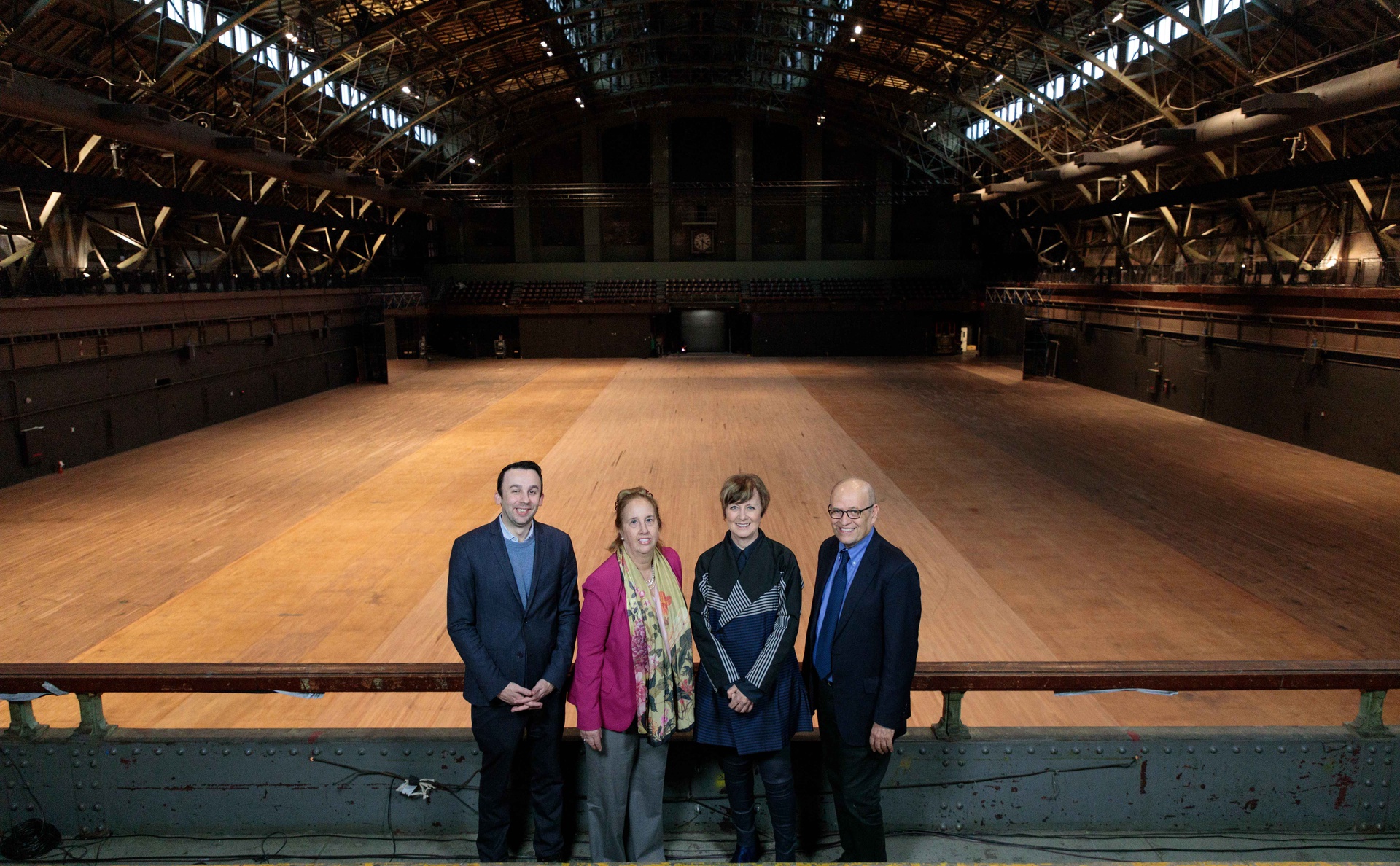 Addressing critical infrastructure needs of the cutting-edge cultural venue, the project replaces the 138-year-old original wood floorboards of the Armory’s 55,000-square-foot drill hall with wood reclaimed from buildings around the U.S.

The drill hall floor project is part of an ongoing renovation and revitalization of Park Avenue Armory’s historic building, named in 2000 among the “100 Most Endangered Historic Sites in the World” by the World Monuments Fund. Designed by the Pritzker-Prize winning architectural firm Herzog & de Meuron, with Platt Byard Dovell White as Executive Architects, the multiyear project reinvigorates the Armory’s original design while stabilizing, preserving, and renewing the building for future generations.

“Park Avenue Armory’s creative programming has become a cornerstone of New York’s cutting edge performing arts community, while Rebecca Robertson and her team have done a remarkable job of keeping the organization grounded in the local community through partnerships with IDNYC and public schools,” said Cultural Affairs Commissioner Tom Finkelpearl. “The City is excited to make this investment in the drill hall’s expansive floor, which literally provides a platform for daring artists and eager audiences to connect with one another.”

“The Park Avenue Armory is a New York City treasure and a cultural institution this Council is proud to support. The amazing programming the Armory puts on keeps our City at the forefront of the cultural world. I am happy to help preserve and improve this historic building and I can’t wait to see how beautiful it will look when this project is finished,” said Speaker Corey Johnson.

“The Park Avenue Armory is a historic cultural hub for the city. I am glad to have been a part of helping to preserve such a storied institution that not only my constituents but all New Yorkers – and those near and far – will be able to enjoy for years to come,” said Council Member Keith Powers. “I want to thank Commissioner Finkelpearl and Speaker Johnson for their partnership.”

“The Park Avenue Armory is a storied, historic building, and almost synonymous with art in Manhattan,” said Manhattan Borough President Gale A. Brewer. “This investment in an iconic, historic structure that plays such a vital role in the cultural life in our city is most welcome.”

“With the lead support from the City, the replacement-in-kind of the floor will mark a transformational moment for Park Avenue Armory,” said Park Avenue Armory President and Executive Director Rebecca Robertson. “The floor is a significant historical and architectural feature of the Armory, regularly in dialogue with the artists who envision and create their work in the space and the audiences who engage with it. After 138 years of feet, horses, cars, trucks, tanks, cranes, and other equipment rolling over it, the floor was in critical need of repair.”

The Wade Thompson Drill Hall is the heart of the Armory’s landmarked building and artistic programming. For 138 years, the Georgia yellow pine floor has been the platform for military parades, athletic competitions, and presidential campaigns. For the last 11 years, the Armory has partnered with artists to help them realize their grandest visions, unencumbered by spatial limitations in traditional theaters and museums, while immersing audiences in not-to-be-missed cultural experiences.

The design team, led by Herzog & de Meuron, has created a floor to meet a variety of aesthetic, acoustic, and structural requirements. A significant historic feature of the building, the floor plays a role in shaping the acoustics of the room and must support constant traffic and live loads of up to 20,000 psf (variable seating banks with 1000+ people, large trucks, heavy art works, etc). The Armory is replacing the original pine-wood floor with reclaimed heart pine of the same era, sourced from historic buildings around the country, including the Armory itself and the Domino Sugar Factory. The Armory worked with the State Historic Preservation Office to identify heart pine as the ideal material for the surface of the floor.

The NYC Mayor’s Office, the New York City Council, and the Manhattan Borough President’s Office have jointly awarded $1,925,000 ($1 million from the Mayor’s Office, $875,000 from the City Council, and $50,000 from the Borough President’s Office). The State of New York, through Assembly member Dan Quart, has contributed $125,000. Led by a challenge grant from the Howard Gilman Foundation and major support from the Stavros Niarchos Foundation, the Armory raised an additional $225,000 in first-time capital contributions towards the restoration of the floor.

Theaster Gates joined the project to supply 20-25% of the reclaimed heart pine, repurposed from historic buildings around the country and milled by his Chicago urban manufacturing renewal project, Dorchester Industries. Since 2009, Gates has worked with the city of Chicago to transform more than 60 vacant local buildings into affordable living and cultural space as a “kind of unofficial commissioner of renewal on the South Side” (New Yorker). The first phase of milling was a success, with an additional 5 weeks of milling work planned for 2019 to complete this major project. The Armory, together with Theaster Gates, will be hosting a public celebration of the project completion in fall 2019 as part of his forthcoming Black Artists Retreat.

Since joining the City’s IDNYC municipal ID program as a benefits partner in 2016, Park Avenue Armory has had more than 5,000 member households redeem free tickets to visual art installations.

Since 2010, the Armory’s arts education program has had: