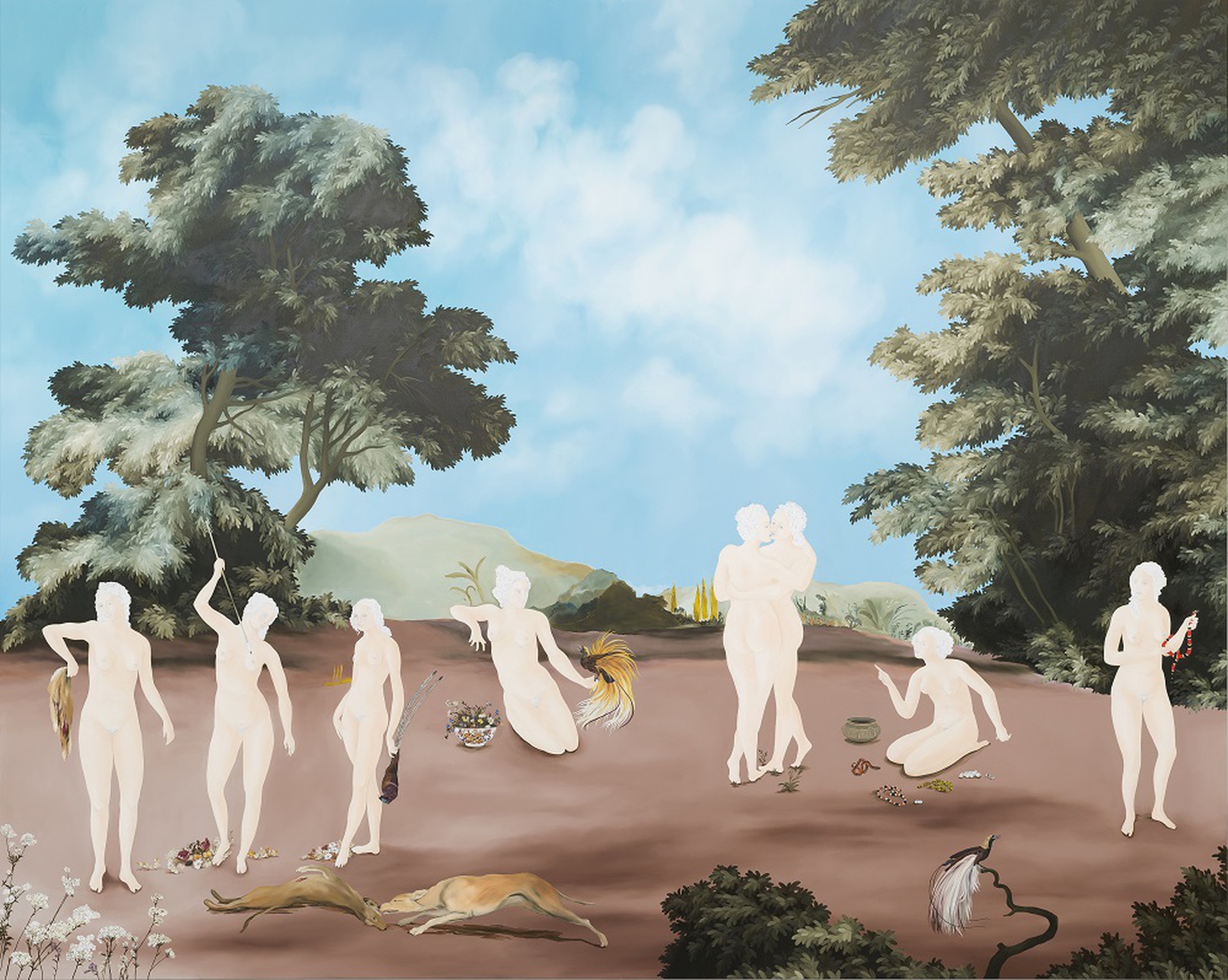 Paul Kasmin Gallery announces its summer program, featuring two thought-provoking group exhibitions on view from June 21 through August 10, 2018: SEED, an exhibition curated by Yvonne Force bringing together 29 contemporary artists to explore the complex relationship between the natural world, sexuality and fertility, and spirituality and mysticism, at the gallery’s 293 Tenth Ave location; and Almost Solid Light: New Work from Mexico, an exhibition of contemporary Mexican artists celebrating the long history of cultural cross-pollination between neighboring nations, at the gallery’s 515 W 27th St. space.

SEED and Almost Solid Light further Paul Kasmin Gallery’s mission to cultivate a program in which historic figures of Post-War and Modernism are brought into meaningful dialogue with the evolving practice of both emerging and established contemporary artists. Additional information on both exhibitions follows below.

This exhibition, curated by Yvonne Force, brings together a group of contemporary artists who explore the complexity and resonance of a long association between the natural world, sexuality and fertility, and spirituality and mysticism. Force’s understanding of the artistic practice as akin to witchcraft—resonant with ideas of creation in both the divine and horticultural senses—informs the curation of works that span landscape, figuration, symbolism and abstraction.

Presenting 29 artists (29 years is the length of Saturn’s orbit around the sun) and inspired by the modernized expression “Oh my Goddess!,” the exhibition is playfully engaged with both traditional and nontraditional deific archetypes: the mystic, the warrior, the sage, the lover, the maiden, and the matriarch. Loaded with surrealism, symbolism and humor, they also act to lend credence to the ongoing significance of figurative painting and sculpture. In bringing together several generations of women working internationally, Force's "SEED" simultaneously illustrates the continued vitality of contemporary studio practice.

Lisa Yuskavage, strongly associated with the renewed interest in figurative painting, shows A No Man’s Land 2 - a wilderness filled with women and children - alongside a younger generation of painters whose astute observations of the strange form of the body are illuminated by Yuskavage. Ambera Wellmann’s entangled women’s torsos appear as almost ceramic on the canvas; Robin F. Williams’ In The Gutter is a wryly comic riposte to any concept of a ‘polite’ female body; Katharina Olschbaur’s keenly surrealist oil on canvas depicts a pair of poised, heeled legs emerging from the white bell of a flower’s head.

Further investigations into sexuality are rendered through the transcendent power of abstraction and symbolism. Theodora Allen’s pastel triptych is grounded by its central panel’s broken white heart; Loie Hollowell’s From the Beginning (inversed) features an almond-shaped black hole that nods both to the beginning of the universe and to birth (for Hollowell, her works are pure, self-contained sexual objects that pulsate with energy.) Cecily Brown’s gestural strokes engulf themselves in semi-abstraction in September Song; Morgan Blair’s spray-painted heaps of color present as almost-bodies heaped on top of one another.

Reconsidering the iconography of female royalty and deities are Sarah Peters, whose sculpture Figurehead questions themes of power and authority (its layered structure mirroring that of an Egyptian pyramid) and Sanam Khatibi, whose Empire of the birds explores animality, primal impulses and the tensions between domination and submission.

The performance Blonde-Demand (2018) by Lacey Dorn will be on view throughout the duration of the exhibition opening and on the following day (Friday, June 22.) To participate, audience members place orders from a menu of iconic blonde films, and Dorn instantly creates a scene from that film. Performing against a green screen, Dorn is simultaneously projected onto the walls on either side, with backdrops from the original film cut behind her, to create a 360 degree “live Netflix” immersion.

Organized in collaboration with Mario Navarro

Paul Kasmin Gallery presents a summer showcase of contemporary Mexican artists, celebrating the long history of cultural cross-pollination between neighboring nations. The exhibition brings together artists practicing in diverse media who are living and working in Mexico and further afield; several of whom have never before exhibited in the USA.

Taking its title from an Óscar Oliva poem, the exhibition explores the region’s focused formal expressions and the significance of often humble, repurposed materials - concrete and wood - that recur in work throughout the revolution era and into postmodernism and contemporary aesthetics.

Though these materials have their practical origins in construction and workmanship, their unexpected assemblages constitute a radical and poetic investigation into the polarities of weight and light; a meditation on solidity as compared to transparency. The works repeatedly touch on the themes of memory, dream and narrative. They propose that it is possible to gain knowledge of - to bring into reaching distance - these grand and ethereal abstractions by giving them context and form in the base materiality of the world.

Amongst the artists investigating the potential of material to give foundation to metaphysical investigation is Alvaro Ugarte, whose flagstone sculptures visualize the trajectory of dreams as relayed to him by agricultural workers from his native country. Pablo Davila’s The Past was Real is an apparently abstract configuration of wall-hung brass tubes that considers the BICEP2 telescope in Antarctica, a machine designed to detect gravitational waves from the birth of the universe. By visualizing one of the measurements of this event, the work queries the ability to know our past with any certainty. Javier Rodríguez’ Havre 27 is an attempt to move closer to the idea of the “language of things,” an object that is activated by video and speaks through light and memory. For Cynthia Gutiérrez, a flag is “a declaration, a symbolic construction that, through form and color, communicates and expresses a specific message.” In her work Abismo Flotante proposes such an object that “does not represent a consolidated identity, but a fragmented identity, dissolved, lost between ashes and dust.”

Just as the work in the exhibition grounds ephemeral notions of dream, memory and identity in solid material, it also deconstructs the physical compositions of the world around us. Mario Navarro’s Future Islands draws attention to the architectural space of the gallery whilst inspecting one of the most basic offerings within the etiquette of hospitality: the chair. Jerónimo Reyes Retana proposes a series of models that reimagine Mexico City’s monuments in abstraction using concrete, glass, and copper; the Mexico-City based duo Tezontle combine historical references in works that lie between found object and sculpture, archeology and invention; and Adrián S. Bará, who is known for an art practice that combines his education and exercise as a filmmaker with his interest for visual narratives, presents a painting in New York for the first time.