The exhibition explores how technological advances in flight, construction, and transportation led to novel ways of seeing 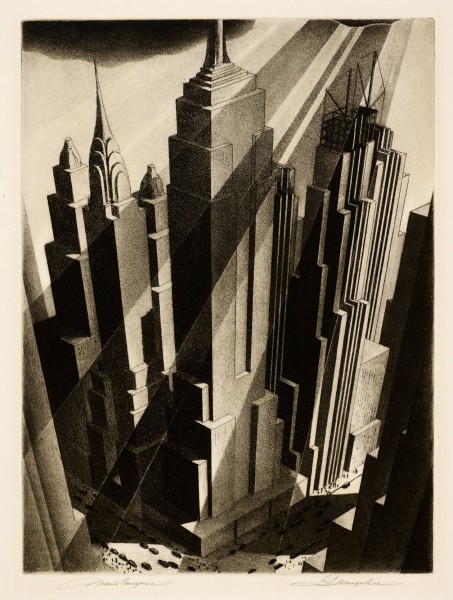 Drawing largely from its renowned collection of art and design, The Wolfsonian­–FIU will examine modern-age ambition in Aerial Vision, an exhibition about progress, promise, and perspective on view November 19, 2021 through April 24, 2022. The show will shed light on seismic changes brought in the early 20th century by new inventions—airplanes, skyscrapers, elevators, and beyond—and probe considerations of power and privilege that come with the expanded ability to gaze up, look down, and move with speed.

Aerial Vision includes more than 100 works ranging from large-scale paintings to prints, drawings, and magazine covers, an array of media that captures the connection between these shifts in perception and an emerging modern ethos. The exhibition will also home in on Miami’s significance as a travel hub, in which a rapidly developing aviation industry profoundly shaped the city’s growth.

“It is hard for us now, more than 100 years later, to imagine the excitement surrounding the advent of skyscrapers and airplanes and to grasp their impact,” said curator Lea Nickless. “Everyone from office workers to artists and designers were affected by these newly accessible views, incorporating them into a modern consciousness that manifested in fresh creative approaches and a forever altered relationship to the larger world.”

The materials on view reflect the wide range of awe-inducing experiences that suddenly became possible in the early 20th century, as well as the emotional responses they provoked: reverence, anxiety, and even fear. While many artworks express optimism for these modernizing changes—capturing a sense of hope, ownership, or pride—some artists and designers allude to the darker sides of this technological revolution set in the skies: the dangers of falling bombs and parachutes, the need for protective camouflage, the feeling of alienation and suffocation found in city streets shadowed by skyscrapers. Aerial Vision covers the full spectrum of this new landscape, from the mundane (window washing scenes, aerodrome plans) to reverent (the “cult of the pilot”) to breathtaking (bird’s-eye views of cityscapes) to fantastic (skyscraper airports).

Highlights of the show are:

“The Wolfsonian collection uniquely positions us to tell stories of profound change,” said acting director Casey Steadman. “Only through historical material can we understand how revolutionary this remarkable era truly was. Aerial Vision will provide a glimpse, through the eyes of those who witnessed it firsthand.”

About The Wolfsonian–Florida International University
The Wolfsonian–FIU is a museum, library, and research center that uses objects to illustrate the persuasive power of art and design, to explore what it means to be modern, and to tell the story of social, historical, and technological changes that have transformed our world. Our holdings comprise more than 200,000 items dating from 1850 to 1950—the height of the Industrial Revolution through the aftermath of the Second World War—in a variety of media including furniture; industrial design; works in glass, ceramics, and metal; rare and reference books; periodicals; ephemera; works on paper; paintings; sculptures; textiles; and medals.

The Wolfsonian is located at 1001 Washington Avenue, Miami Beach, FL. Admission is free and the museum is open Wednesday–Sunday, 10am–6pm. Contact us at 305.531.1001 or visit us online at wolfsonian.org for further information.

About FIU
Florida International University is a Top 50 public university that drives real talent and innovation in Miami and globally. High research (R1) activity and high social mobility come together at FIU to uplift and accelerate learner success in a global city by focusing in the areas of environment, health, innovation, and justice. Today, FIU has two campuses and multiple centers. FIU serves a diverse student body of more than 58,000 and 270,000 Panther alumni. U.S. News and World Report places dozens of FIU programs among the best in the nation, including international business at No. 2. Washington Monthly Magazine ranks FIU among the top 20 public universities contributing to the public good.