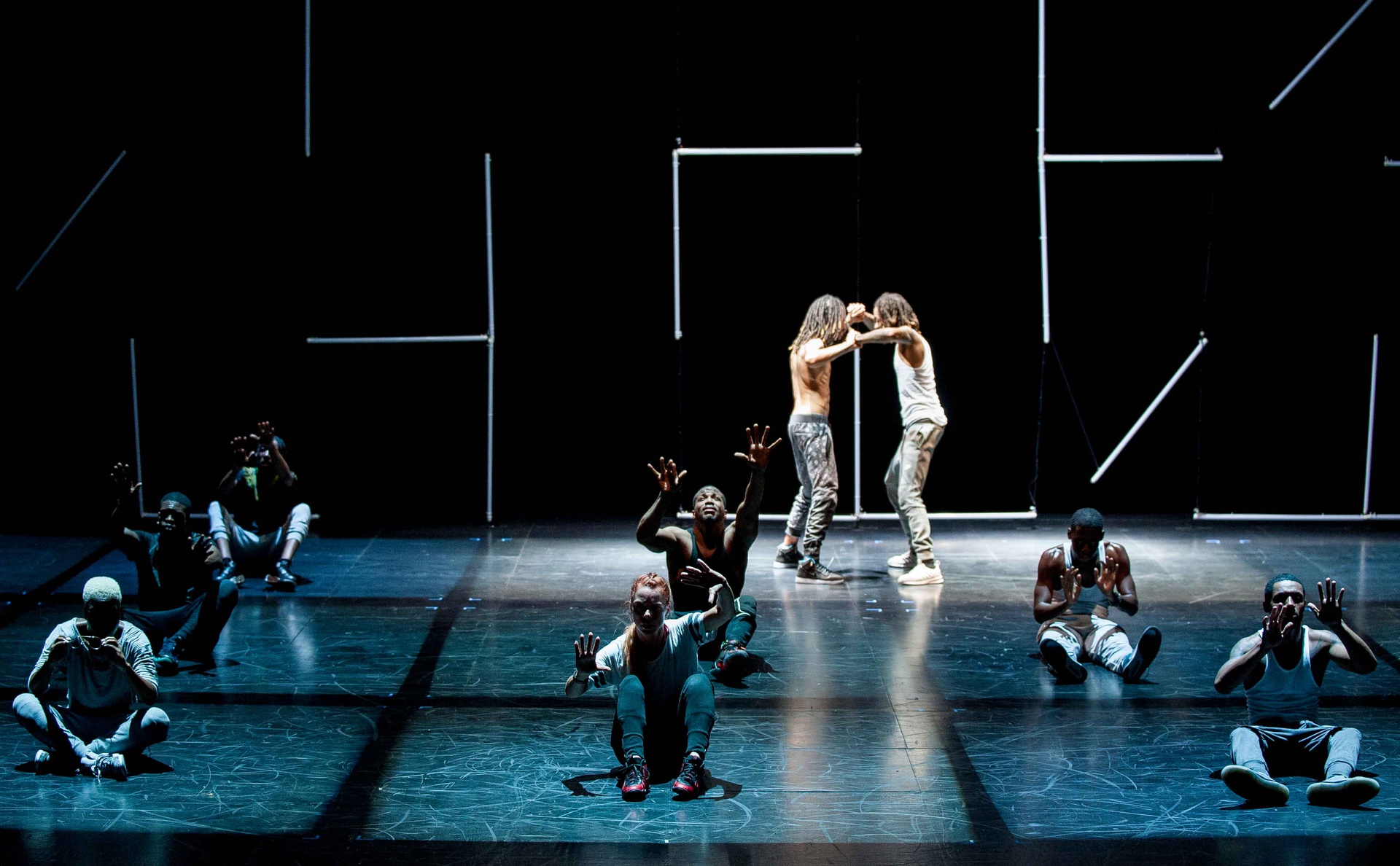 Dance pioneer Reggie (Regg Roc) Gray and visionary director Peter Sellars will lead FLEXN Evolution at Park Avenue Armory, May 18 – 21, 2017. The work epitomizes the Brooklyn-born street dance flex, transformed from its individual, combative style into a collaborative work of bone-breaking and boundary-breaking social activism, human exchange, and sheer artistic daring. Re-envisioned with newly created scenes since the Armory’s premiere of FLEXN in 2015, FLEXN Evolution is newly intimate, emotionally focused, personal, virtuosic, and transcendent, while embodying the next steps in a form that breaks news from the artistic and political front lines.

Going into the heart of issues that are only more urgent and more intense two years later, each performance will begin with an onstage conversation organized in collaboration with Common Justice, which develops and advances solutions to violence that meet the needs of crime survivors and fosters racial equity without relying on incarceration.Entitled “A New Vision for Justice in America,”the series represents new coalitions, insights, and ways of understanding questions of justice and injustice in communities that are demanding and actively shaping new futures. Artists Gray and Sellars moderate conversations that bring into dialogue collective problem-solving approaches with many of the leading intellectuals, community leaders, and dedicated innovators in the field of justice in America today. Participants include visionary public figures, social justice advocates, community leaders, and youth from across the country such as Danielle Sered (Director of Common Justice), Michelle Alexander (author, The New Jim Crow), Eric Gonzalez (Acting District Attorney, Brooklyn), Khalil Gibran Muhammad (Professor of History, Race and Public Policy, Harvard Kennedy School), and student activists Iman Abdul and Frantzy Luzincourt (student activists, IntegrateNYC4Me).

Co-directed by Gray and Sellars, the performances that follow feature a series of self-choreographed and improvisational scenes by 16 dance-activists from the D.R.E.A.M. Ring, a creative engine of acclaimed artists that unite communities through movement for social change around the world. Using the flex dance vocabulary—characterized by sharp, rhythmic contortion, pausing, snapping, gliding, bone-breaking, and animated showmanship—the dance-activists confront issues of social justice and racial equality within our nation’s law enforcement and judicial systems.

On the final day of the performances (Sunday, May 21), there will be special celebration of FLEXN, Gray, and the D.R.E.A.M. Ring’s own evolution from one-on-one dance combatants to an international touring troupe of dance activists. Following the 3:00 p.m. matinee, special events will include a D.R.E.A.M. Ringmaster event where two-man and tag-team performances are showcased as well as demonstrations by the OGs (Original Generation) of flex, tracing the growth of the movement from its roots in the Jamaican bruk-up style popular in dance halls and reggae clubs of Brooklyn in the 1990s, to its performances now.

“FLEXN and its deeply personal yet universal themes have been embraced by audiences all over the world over the past two years,” said Pierre Audi, Artistic Director of Park Avenue Armory. “We are so proud to bring our audiences in New York the next step in the evolution of this Armory commission, as the dance form and the issues addressed continue to present themselves as more urgent than ever.”

“Reggie, Peter, and the D.R.E.A.M. Ringcommunity have created an incredibly moving work full of tremendous energy and insight,” said Rebecca Robertson, Executive Producer and President of Park Avenue Armory. “We are so happy to have Reggie and the D.R.E.A.M. Ring dancers as artists in residence, supporting his and his colleagues’ work as they continue to push this form into new areas of both dance and activism.”

The FLEXN vocabulary moves across several intricately refined and perpetually redefined techniques. “Pausing” demonstrates stop-and-start freeze-frame analysis, before-and-after shots, the inner compulsion and the outside push-back that makes every move into a heroic moment. “Gliding” is based on the need to fly when you are trapped by an obstacle—time and space reorient and shift, and the body takes off and relocates with psychic and physical equilibrium and grace. “Get low” is about moving swiftly under the radar in an alternate culture and alternate economy, dancing on your knees with speed and style. “Bone-breaking” is about being broken, day after day, and reimagining and rebuilding your body and your identity in new forms with new possibilities that defy gravity, physique, and all the odds. “Grooving” takes the sweetness and juice of Jamaican dance-hall moves and translates them into a powerful display of emotion and inner life. “Connecting” is dance meta-language for communication in extraordinary circumstances, fast moves elaborating new geometries of the body and the world, rendering visible invisible matrices of connectedness, belonging, participation, and accomplishment.

Also on display during the Armory performances will be an installation of photographs by Carol Dragon in the Colonels Room. Dragon, who has been following the flex movement for many years, will display her portraits of the dancers participating in the show to allow another unique look at their movement and style as documented through portraiture.

FLEXN Evolution has been in development since its premiere with Gray and his D.R.E.A.M. Ring dancers in 2015, during their time as Artists-in-Residence at the Armory. The Armory has also organized two national and international tours of FLEXN to venues throughout the U.S., Australia, Italy, and France in 2015 and 2016. In its new iteration this year, FLEXN will travel to the Netherlands, Germany, and additional U.S. venues.

FLEXN Evolution is part of the Armory’s 2017 season, which activates the institution’s dynamic platforms—from the Wade Thompson Drill Hall to an array of exquisite historic period rooms—to enable the creation of new artworks and experiences that could not be realized in traditional concert halls, theaters, and museum galleries.

Additional upcoming programs include: Hansel and Gretel, a new commission by Jacques Herzog, Pierre de Meuron, and Ai Weiwei that explores the meaning of publicly shared space in the era of surveillance; the North American premiere of Blank Out, a chamber opera for soprano and 3D film based on the life and work of poet Ingrid Jonker by composer/director Michel van der Aa; Pierre Boulez’s rarely performed spatial masterpiece Répons with Ensemble intercontemporain and led by Matthias Pintscher; KANATA, a commissioned, three-part theater work that confronts the treatment of indigenous peoples across Canada, directed and conceived by Robert Lepage and developed with Le Théâtre du Soleil and Ex Machina; and annual series of eclectic and intimate concerts and conversations held in the Armory’s head house spaces. This season’s artists in residence include two-time Pulitzer Prize-winning playwright Lynn Nottage, Cuban installation and performance artist Tania Bruguera, composer and guitarist Marvin Sewell, and choreographer and flex dance pioneer Reggie (Regg Roc) Gray.