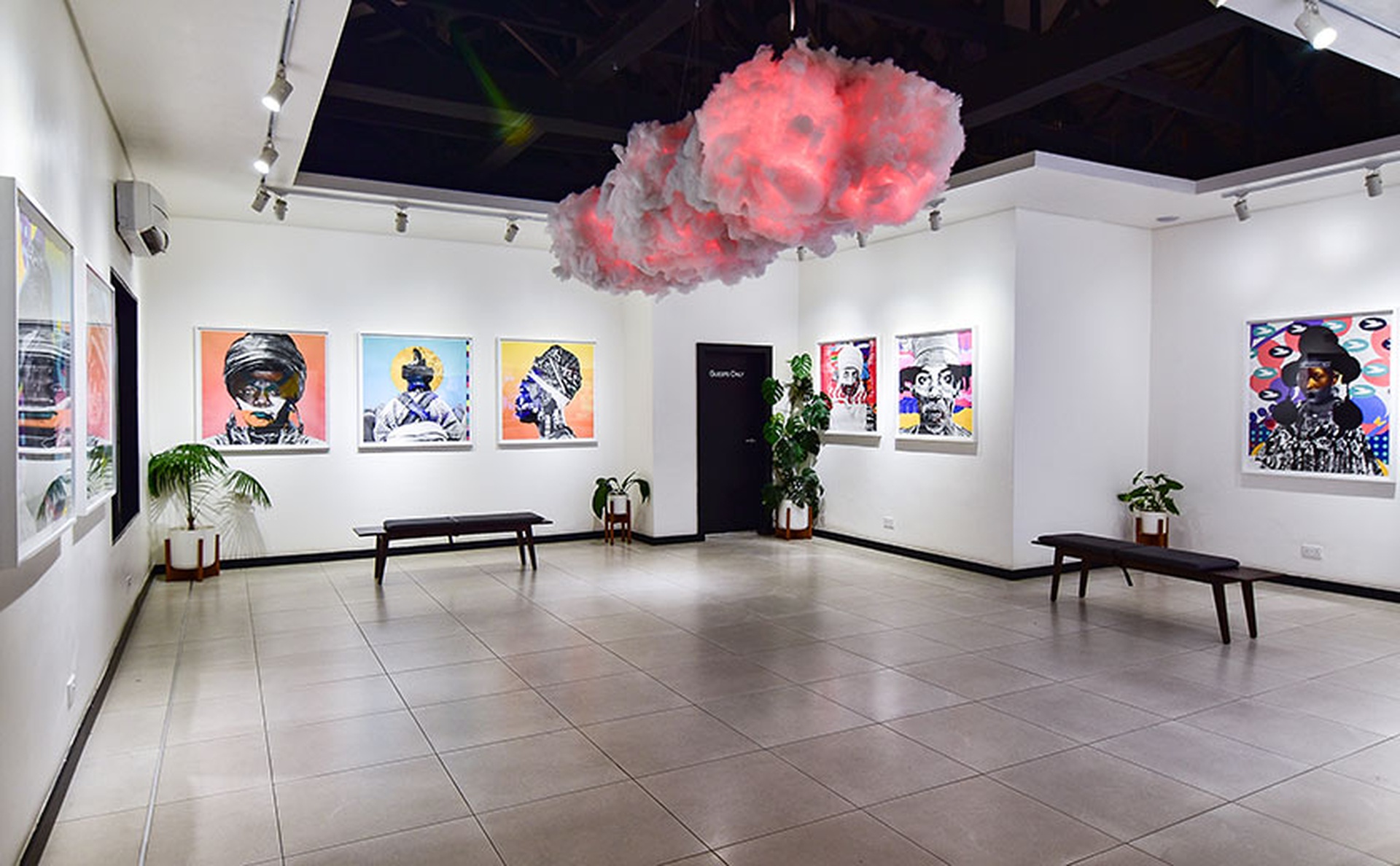 Retro Africa today announced its Spring-Summer exhibitions and artist projects, including programs in Abuja, Dubai, and New York. Retro Africa wasfounded in 2015 by Dolly Kola-Balogun with the mission of fostering greater engagement with contemporary African artists in Nigeria, across Western Africa, and worldwide. The upcoming season will be anchored by three exhibitions at the gallery’s home in the Nigerian capital of Abuja, starting with an exhibition of newly commissioned site-specific works by Alimi Adewale that will utilize Retro’s campus, which encompasses a 1,600 square-foot gallery, a small boutique art hotel, café, and outdoor public gathering space. The exhibition will be followed by a group show in June that will feature Francophone African artists in dialogue with Anglophone West African artists as the first exhibition to grow out of the launch of a new West African Art Alliance, spearheaded by Retro Africa Founder Dolly Kola-Balogun and Igo Diarra, Director of Galerie Medina in Bamako, Mali. In July, Retro will mount a solo presentation of Nigerian artist Jacqueline Suowari's signature ballpoint pen drawings.

Upcoming presentations include the unveiling of Retro artist Victor Ehikhamenor’s large-scale sculpted canvases, commissioned for Facebook’s Dubai headquarters in April. Retro artist Tyna Adebowale, who was recently selected as a 2021 artist-in-residence at Kehinde Wiley’s Black Rock Senegal in Dakar, and Ken Nwadiogbu, who had his US debut in a solo exhibition at Thinkspace, Los Angeles, will be featured in an online presentation for 1-54 Contemporary African Art Fair in May. This exhibition will be remounted IRL in July at a pop-up gallery in New York. Retro Africa’s founder Dolly Kola-Balogun, is also spearheading the creation of the new Institute of Contemporary African Art and Film in Ilorin, a legacy project championed by Kwara State Governor Abdulrahman Abdulrazaq, which is scheduled to open at the end of 2021. The ICAAF will engage artists from across Africa and overcome the residual linguistic borders that persist to this day that were imposed on Africa through colonization.

"I'm deeply inspired to see the growing recognition of African artists and art from the diaspora really starting to come into the forefront on a global scale," says Dolly Kola-Balogun. "While the art world is still at the very beginning of its discovery, we must remember to honor the full legacy of the past, celebrate the artists that have been creating outside of this watershed moment, and invest in the future of Africa and art-making so that these African artists can participate fully in the international dialogue while building long-lasting careers on the same soil their art was made."

Victor Ehikhamenor will debut his commission for Facebook at its Dubai headquarters as part of Ehikhamenor’s participation in Facebook's Artist in Residence program in January 2021. The large-scale installation, entitled Say Your Mind, is comprised of a mural in Ehikhamenor’s signature pattern and is a new iteration of his sculpted canvas series. Ehikhamenor’s commission speaks to the universal appeal of his work and marks the first time Facebook has selected an artist-in-residence who lives and works primarily outside of the region where the work will be displayed.

Ehikhamenor is currently collaborating on costume design for a Netflix series that will be announced at a later date. His artist residency and co-working space in Lagos, Angel & Muse, was previously featured on the streaming giant’s Amazing Interiors series, showcasing the artist’s floor to ceiling murals throughout its interior. Ehikhamenor was also one of three artists who represented Nigeria as part of its first participation in the Venice Biennale in 2017.

Intrinsic to Victor Ehikhamenor‘s artistic practice is his work as an advocate for the repatriation of Benin sculptures to Nigeria and the development of the Edo Museum of Western African Art in Benin City, designed by David Adjaye.

In a site-specific exhibition of never-before-seen work, Nigerian Artist Alimi Adewale repurposes long held tenets of European, Modern and Indigenous art into new visions of African figuration. Drawing upon his Courage series, in this new body of work he proposes alternative ways of channelling all peoples into one mind towards new signifiers of understanding. Rather than focusing on what separates us as individuals, Adewale emphasises our commonwealth as keepers of the human race tasked with unifying a deeply divided world, further fractured by religious differences, income, and gender inequalities. Along with paintings, Adewale incorporates his mastery of sculpture installations as a response to recent global upheavals which include the world-wide pandemic and protests against state-sanctioned police violence in Nigeria, the United Kingdom, United States, and worldwide.

Tyna Adebowale, who is currently an artist-in-residence at Kehinde Wiley's Black Rock Senegal, uses the body as a signifier and tool to trace history and advocate for visibility. Her detailed paintings often feature androgynous characters amidst a detailed background of lines, symbols, and forms to explore alternate ways of existing. Her work addresses political, historical, and social issues encompassing gender and sexual orientation, and often centers on the identity and oppression of queer women.

Ken Nwadiogbu’s innovative conceptual drawings engage in multidisciplinary modes of storytelling by disrupting standard narratives through depicting masks as a means of liberation or escape. Nwadiogbu uses charcoal, collage, acrylic, and more recently, photography, painting, sculpture, installation, and performance art to explore themes including African cultures and Black power. His work recently made its US debut in a solo exhibition at Thinkspace, Los Angeles.

Victor Ehikhamenor is featured in LOOK AT THIS, a group exhibition curated by Folakunle Oshun (Lagos) and Bernhart Schwenk (Munich) that aims to turn the perception of art and the multiplicity of perspectives into the actual subject of the exhibition. The exhibition is an analysis and dialogue between the curators who question the nature of art exhibitions, their genesis, the role space plays, and the power dynamics between the artists and the institution.

Stranger Here, Stranger There will be the first exhibition to emerge after the launch of a new West African Art Alliance in Bamako, spearheaded by Retro Africa Founder Dolly Kola-Balogun and Galerie Medina Director Igo Diarra. As an attempt through artistic outreach to heal colonial legacies that have led to separation, this exhibition will seek to rebuild cultural bonds that have been challenged by inherited and imposed colonial linguistic barriers. Featuring Francophone artists including Jems Koko Bi (Ivory Coast); Barthélemy Toguo (Cameroon); Amadou Sanogo (Mali); Abdou Ouologuem (Mali); and Soly Cissé (Senegal) figuratively in conversation with their Anglophone counterparts (to be announced)—stranger to one another in their own land, but united by a common history and identity.

Nigerian artist Jacqueline Suowari uses the power of her ballpoint pen as her primary tool to translate her experiences and inspiration onto layered, colorful canvases that depict visual narratives exploring human connection and cultural identity. In Now I Wear Myself, Suowari takes her practice one step further by reclaiming and reconstituting disparate cultural signifiers — Nsibidi inscriptions, Nok, Benin, Ife masks and sculptures, Dutch wax and lace fabrics — into new forms of self-identification. Suowari examines the distance between who the world perceives us to be and who we see in the mirror as a way to encourage breaking free from the fear of being judged and to move towards true self-expression. Her larger-than-life portraits combine thousands of pen strokes and a range of design elements to represent the human experience.

These exhibitions and projects advance Retro Africa's mission to highlight the multitude of contemporary pan-African expressions in Nigeria and around the world and reflect its dedication to educating and engaging global audiences with new voices defining contemporary African art. Future programming from Retro Africa’s pop artist William Chechet among others on the roster, will be announced.

About Retro AfricaSince its founding in 2015, Retro Africa has served the city of Abuja and the broader African art community as a hub of contemporary art and culture. With its international program of exhibitions, art fair presentations, and intra-gallery curatorial collaborations, Retro Africa seeks to explore emerging and historically overlooked narratives. Dedicated to encouraging growth within the visual arts, the gallery and community center provides a platform for established and emerging artists, organizing public programs, workshops, and residencies to foster learning and highlight the breadth and depth of the contemporary African art scene.