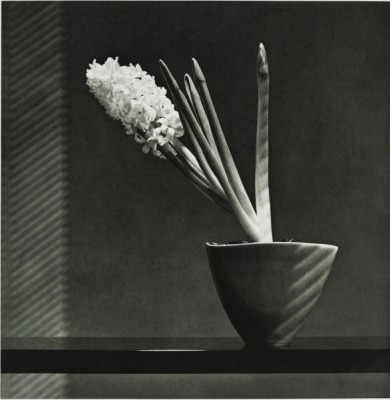 Updated February 11, 2022 -- Marie Selby Botanical Gardens (Selby Gardens) spotlights the creative practices of Robert Mapplethorpe, one of the most significant photographers of the 20th century, and legendary singer-songwriter and poet Patti Smith in an immersive and multisensory exhibition opening this weekend in the Gardens’ 15-acre Downtown Sarasota campus. Marking the sixth edition of Selby Gardens’ annual Jean & Alfred Goldstein Exhibition Series, which explores the work of major artists through the lens of their connection to nature, the exhibition presents a selection of Mapplethorpe’s iconic photographs of orchids, hyacinths, and irises, and Smith’s poems on flowers and nature as well as her music, in dialogue with new horticultural installations inspired by the two artists’ work.

On view from February 13 through June 26, 2022, Robert Mapplethorpe and Patti Smith: Flowers, Poetry, and Light is curated by Dr. Carol Ockman, Selby Gardens’ Curator-at-Large and the Robert Sterling Clark Professor of Art History Emerita at Williams College. The Gardens will host an Evening with Patti Smith, on Tuesday, February 15, a lecture and performance by Smith that will shed new light on this body of work.

“Selby Gardens is thrilled to bring together this curated selection of nature-inspired works by Robert Mapplethorpe and Patti Smith and present them for the first time ever in a botanical garden as part of our innovative Goldstein Exhibition Series,” said Jennifer Rominiecki, President & CEO of Selby Gardens. “Marking the first time that Selby Gardens has presented the work of a living artist and a contemporary photographer in the series, this exhibition creates an immersive experience for our visitors. Our gardens and floral displays will set the stage for a unique cultural encounter and exchange with two of the most iconic artists of our time.”

Mapplethorpe and Smith met the day that Smith moved to New York City in the summer of 1967. Their enduring relationship, through which the two spent time as artistic collaborators, lovers, and ultimately friends, proved formative to each other’s creative practice and artistic output. Flowers, Poetry, and Light reunites Mapplethorpe and Smith in a garden setting, presenting works by each inspired by nature during the counterculture movements of the 1960s, ’70s, and ’80s.

Selby Gardens’ Tropical Conservatory, world-renowned for its collection of orchids and bromeliads, is reimagined as a photography studio and gallery, complete with drop cloth, box lights, and living plants framed and suspended as still lifes. The experience throughout the Conservatory is enhanced with the sounds of Smith’s iconic Horses album, the cover of which features her portrait by Mapplethorpe and serves as the first dramatic visual upon entering the Conservatory.

The Museum of Botany & the Arts presents Mapplethorpe’s exquisite flower photographs, including Orchid, Irises, and Hyacinth, made at Graphicstudio at the University of South Florida in Tampa together with Smith’s haunting writings and lyrics. Reproductions of historic photographs of the two artists, their friends, lovers, and living spaces tell the story, accompanied by Smith’s own words.

Throughout the exhibition, horticultural installations inspired by the two artists’ creative practices evoke vignettes from their shared histories in color palettes that connect back to their work—with rich, deeply hued varieties for Smith and flora in grayscale for Mapplethorpe. Some installations position the viewer as the photographer, looking through the viewfinder, and others evoke a gallery with plants framed as living art or an urban landscape like the area around the Chelsea Hotel in New York City, where the two lived in early days of their relationship. Archival images, music from two of Smith’s early albums, and her own narration of her award-winning book Just Kids animate the visitor experience. A poetry walk including excerpted verses from Smith’s work provides moments of reflection within the gardens and underscores the rich symbolism of flowers.

“Through this unique and immersive installation, visitors can explore Mapplethorpe’s aesthetic strategies for capturing beauty, including his debts to classical sources and the specific ways he uses light, composition, and color in images of flowers,” said Dr. Carol Ockman, the exhibition’s curator. “These principles of classicism, sensuality, and beauty are echoed from the museum throughout the gardens and conservatory, and are highlighted by the resounding words of Smith, Mapplethorpe’s once lover, close friend, and muse.”

Robert Mapplethorpe (American, 1946–1989) was a photographer whose vast, provocative, and powerful body of work has established him as one of the most important artists of the 20th century. Equally recognized for his classical still lifes as for his portrayals of nudes, Mapplethorpe’s subjects were often his friends and lovers, captured in dramatically lit, posed studio photographs that emphasized a high degree of formalism and concern for art historical symbols.

Born in Queens, Mapplethorpe attended classes at Pratt Institute in Brooklyn, where he experimented with various materials and mixed media collages, influenced by artists such as Joseph Cornell and Marcel Duchamp. It was in Brooklyn where he met fellow artist and musician Patti Smith, who posed in many of his earliest portraits and who would go on to memorialize their relationship and enduring friendship in her best-selling memoir, Just Kids (2010). In 1970, Mapplethorpe acquired his first Polaroid camera and began taking photographs of his family, friends, and public personalities regularly, culminating in his first solo exhibition of this work in 1973 at the Light Gallery in New York City. By the late 1970s, Mapplethorpe’s focus turned to photographing sexually charged images, which ultimately brought him significant critical attention. He met Lisa Lyon, the first World Women’s Bodybuilding Champion, in 1980, and over the next several years they collaborated on a series of portraits and figure studies, as well as a film and book.

Mapplethorpe was diagnosed with AIDS in 1986 and subsequently established the Robert Mapplethorpe Foundation, dedicated to supporting photography at the institutional level and AIDS/HIV medical research. His first major American retrospective was presented at the Whitney Museum of American Art in 1988, just a year before his death. Mapplethorpe’s work has since been exhibited at documenta in Kassel, Germany, the Solomon R. Guggenheim Museum in New York, the J. Paul Getty Museum in Los Angeles, the Centre Pompidou in Paris, the Deutsche Guggenheim in Berlin, and the Tate Modern in London, among many other institutions.

Patti Smith, born in Chicago and raised in South Jersey, migrated to New York City in 1967. Her extensive achievements as a performer, author, recording and visual artist are acknowledged worldwide.

Released in 1975, Smith’s first recording, Horses (the cover of which was photographed by Mapplethorpe), was inducted into the National Recording Registry at the Library of Congress in 2010 by the National Recording Preservation Board. Her subsequent albums include Radio Ethiopia; Easter, which included Because the Night, co-written with Bruce Springsteen; Wave; Dream of Life, which included People Have the Power, co-written with her late husband Fred “Sonic” Smith; Gone Again; Peace and Noise; Gung Ho; Trampin’; Land; Twelve; Banga; and Outside Society. She is a four-time Grammy® nominee and a Golden Globe nominee for the song Mercy Is co-written with Lenny Kaye for the film Noah. Steven Sebring’s 2008 documentary, Patti Smith: Dream of Life, received an Emmy nomination.

Patti Smith was awarded the prestigious 2010 National Book Award for her bestselling memoir, Just Kids, chronicling her deep friendship with photographer Robert Mapplethorpe and the evolution of their work. Her books include Witt; Babel; Woolgathering; The Coral Sea; Auguries of Innocence; Collected Lyrics, 1970-2015; M Train; Devotion; and Year of the Monkey.

Smith holds the honor of “Commandeur des Arts et des Lettres” from the French Ministry of Culture. In 2007 she was inducted into the Rock and Roll Hall of Fame. She was honored by ASCAP with the Founders Award in 2010, representing lifetime achievement, and was the recipient of Sweden’s 2011 Polar Award, an international acknowledgement for significant achievements in music. In 2013, Smith received the Katharine Hepburn Medal from Bryn Mawr College, recognizing women whose contributions embody the drive and work ethic of the celebrated actress. In 2014, Barnard College Board of Trustees presented Patti Smith with their Medal of Distinction. In 2016, she was awarded the Burke Medal for Outstanding Contribution to the Arts in Trinity College, Dublin.

Smith’s photographs, drawings, and installations have been exhibited in galleries and museums worldwide. Coupled with her photography exhibit Higher Learning, Smith received the Laurea Magistrate causa from Parma, Italy, and an honorary doctorate in Euro-American Literature from Padova University. She was awarded The Badge of the Austrian Decoration of Science and Art in 2019.

In 2020 Smith received the literary service prize from PEN America and the Wall Street Journal acknowledged her as a Literature Innovator.

Her renowned band includes guitarist and author Lenny Kaye, who she has collaborated with since 1971; drummer Jay Dee Daugherty since 1975; Tony Shanahan on bass and keyboards, since 1996; and her son, guitarist Jackson Smith, for over a decade.

At present Smith writes, performs, and lends support for human-rights issues and environmental groups, primarily Pathway to Paris, a nonprofit organization co-founded by her daughter, Jesse Paris Smith, offering tangible solutions for combatting global climate. She resides in New York City. She is a featured writer on Substack, where her twice weekly writings and readings can be subscribed to online.

Launched in 2015, the Jean & Alfred Goldstein Exhibition Series examines master artists and their relationships to nature in the context of a botanical garden. Past exhibitions include Roy Lichtenstein: Monet’s Garden Goes Pop! (2021); Salvador Dalí: Gardens of the Mind (2020); Gauguin: Voyage to Paradise (2019); Warhol: Flowers in the Factory (2018); and Marc Chagall, Flowers, and the French Riviera: The Color of Dreams (2017).

Marie Selby Botanical Gardens provides 45 acres of bayfront sanctuaries connecting people with air plants of the world, native nature, and our regional history. Established by forward thinking women of their time, Selby Gardens is composed of the 15-acre Downtown Sarasota campus and the 30-acre Historic Spanish Point campus in the Osprey area of Sarasota County, Florida. The Downtown Campus on Sarasota Bay is the only botanical garden in the world dedicated to the display and study of epiphytic orchids, bromeliads, gesneriads and ferns, and other tropical plants. There is a significant focus on botany, horticulture, education, historical preservation, and the environment. The Historic Spanish Point (HSP) Campus is located less than 10 miles south along Little Sarasota Bay. The HSP Campus, one of the largest preserves showcasing native Florida plants that is interpreted for and open to the public, celebrates an archaeological record that encompasses approximately 5,000 years of Florida history.