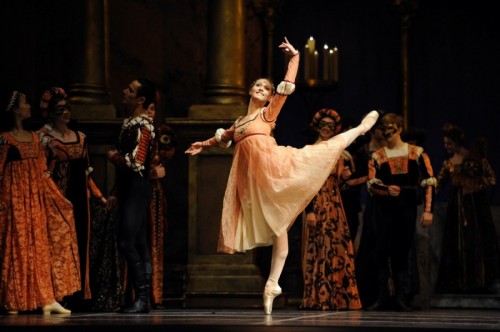 Today, San Francisco Ballet (SF Ballet) announced that Principal Dancer Sarah Van Patten will be leaving the Company following the 2022 Repertory Season, her 20th season with SF Ballet, to focus on her family and pursue leadership opportunities within the arts.

Van Patten, who joined SF Ballet as Soloist in 2002, and was promoted to Principal Dancer in 2007, will give her last performance with the Company on Saturday, April 16 at 7:30 pm PDT at the War Memorial Opera House in a special evening celebrating her 20-year tenure. Reprising some of her most celebrated roles, Van Patten will perform selections from Danielle Rowe's Wooden Dimes, George Balanchine's Diamonds, the North American premiere of Yuri Possokhov’s Gabrielle Chanel, and the balcony pas de deux from SF Ballet Artistic Director & Principal Choreographer Helgi Tomasson’s Romeo & Juliet. The evening will also include a special video commemoration of her career. Tickets will be on sale on Friday, March 4 on SF Ballet’s website.

“Sarah is an immensely talented artist who has brought to this Company a diverse range of abilities, both in her dancing and in her dramatic interpretations of some of the great roles of classical ballet,” said Tomasson. “She has been integral to the creation of some of my own ballets, as well as ballets by numerous other choreographers who have worked in our studios throughout the past two decades. It has been a pleasure to work with her and we will miss her dearly.”

“It has been an incredible 20 years dancing for San Francisco Ballet,” said Van Patten. “I feel so fortunate to have been given the opportunity from Helgi when I was 17 to join the company as a soloist. I never could have imagined then what has ended up being such an amazing journey. Thank you to so many people behind the scenes and in the audience who have supported and helped me along over these years. I will forever cherish this chapter in my life and I look forward to what is next!”

In addition to her career at SF Ballet, Van Patten is a choreographer, producer, and director. She is the founder and artistic director of Tahoe Dance Camp, a nonprofit that she created in response to the Covid-19 pandemic to provide a place for herself and other artists to safely create before they could return to the dance studio. In the two years since its founding, Tahoe Dance Camp has brought world-class dancers, choreographers, and other artists to Lake Tahoe to create, collaborate, and perform.

About San Francisco Ballet
San Francisco Ballet is one of the world’s leading ballet companies. As a commissioner, collaborator, and presenter, SF Ballet performs locally, nationally, and internationally with the top choreographers, artists, and dancers while proudly celebrating its trailblazing role in dance. Since its founding in 1933 and as the oldest professional ballet company in the United States, the organization has been an innovator in dance and an originator of well-loved cultural traditions, from staging the first American production of Swan Lake to being the first company in the United States to present an annual holiday Nutcracker. In the progressive, innovative spirit of San Francisco, its aim is to share the beauty of classical and contemporary ballet, the joyful, transformative experience of live dance performance by artists working at the highest caliber, and to provide exceptional training opportunities for the next generation of professional dancers in its School.