Aging Ruins Dreaming Only to Recall the Hard Chisel from the Past, by Otobong Nkanga with Emeka Ogboh, is now part of the Foundation’s collection and will be on permanent display 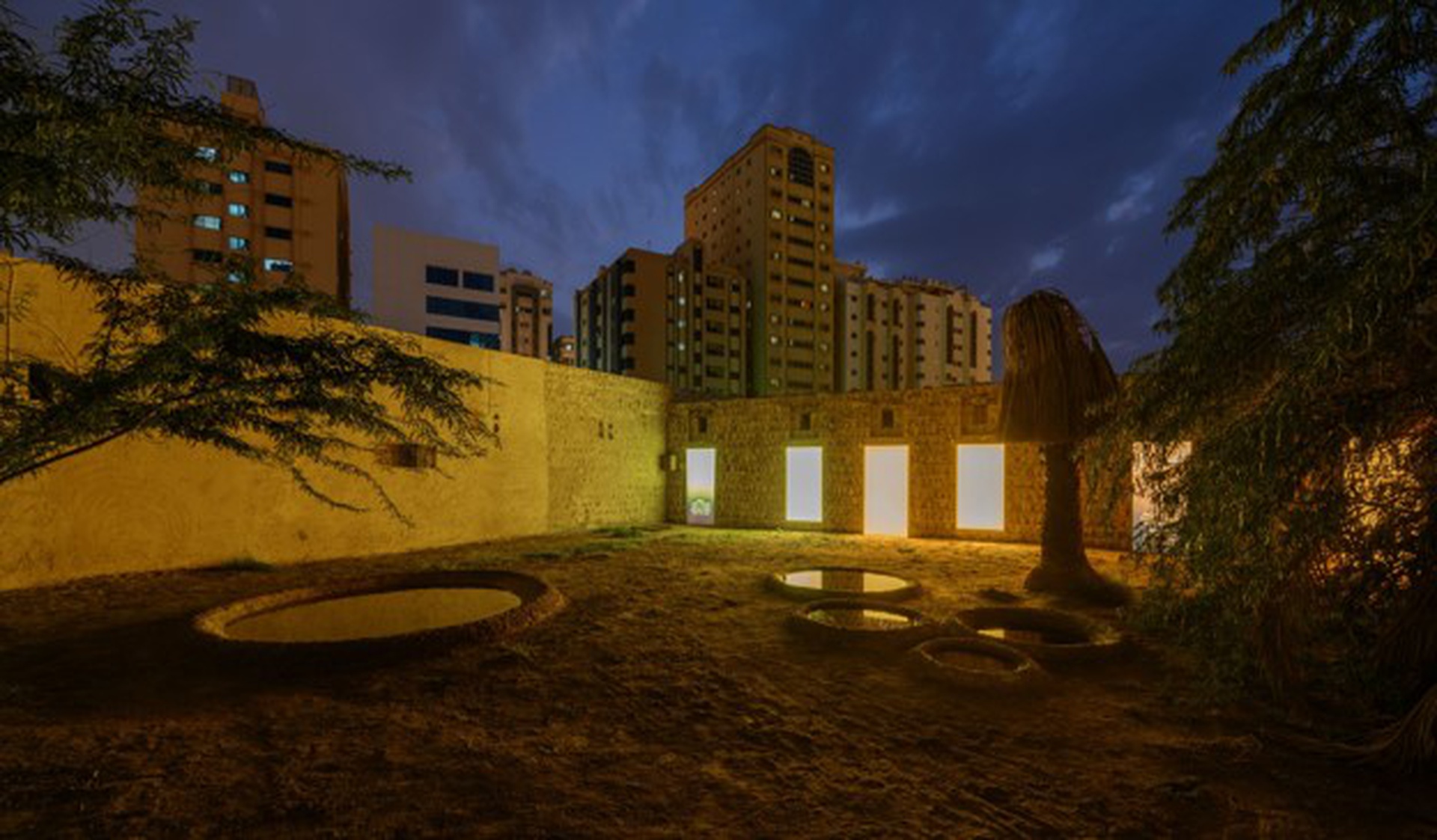 Image
Otobong Nkanga with Emeka Ogboh, 'Aging Ruins Dreaming Only to Recall the Hard Chisel from the Past,' 2019. Courtesy of the artists. Photo: Sharjah Art Foundation

Aging Ruins Dreaming Only to Recall the Hard Chisel from the Past, by Otobong Nkanga with Emeka Ogboh, is now part of the Foundation’s collection and will be on permanent display

Sharjah Art Foundation is pleased to announce its acquisition of the work Aging Ruins Dreaming Only to Recall the Hard Chisel from the Past by Otobong Nkanga with Emeka Ogboh, a Sharjah Art Foundation commission and winner of the Sharjah Biennial 14 Prize. Comprising a series of multimedia interventions in the courtyard of the heritage house Bait Al Aboudi, part of the Foundation’s Al Mureijah Art Spaces, the work was first on view during Sharjah Biennial 14: Leaving The Echo Chamber (SB14) from 7 March through 10 June 2019 and is now on permanent display at the same location. The site-specific installation is the first work to be permanently installed in the Foundation’s heritage houses.

‘It’s a pleasure to have worked with Otobong Nkanga since her first participation almost 15 years ago as part of Sharjah Biennial 7 in 2005, and more recently as part of Sharjah Biennial 14 in 2019,’ said Hoor Al Qasimi, Director of Sharjah Art Foundation. ‘With this installation, we are able to explore ideas around land and ecology that continue to inform Nkanga’s work. It’s also rewarding to see the work interact with the natural environment in the heritage house Bait Al Aboudi and the surrounding grounds in Al Mureijah Square. Revitalising the heritage buildings and architecture through activations is one of our central missions, and this ambitious project is a touchstone for our permanent collection.’

‘Otobong Nkanga is an artist who has long inspired me and changed the way that I see the world. When I was invited to curate the Sharjah Biennial, I fell into the gravelly floor of Bait Al Aboudi, and its earthly ruins reminded me of a drawing of Nkanga’s. I knew this was a place that she could transform.’ said Omar Kholeif, Director of Collections and Senior Curator at Sharjah Art Foundation. ‘With the collaboration of Emeka Ogboh, she has created an immersive centrepiece in Al Mureijah Art Spaces that brings into contact the mind, body and soul. I am ever so proud to be able to share this work with our audiences.'

In the untended garden of the heritage house Bait Al Aboudi, the artist has created several circular craters framed by sand mounds, which she filled with water brought in from the sea. Salt has been added to ensure that traces of saline will remain as the water evaporates over time. In close proximity to the craters, a number of speakers play a range of natural sounds—a recording of an Emirati ‘rain song’ performed by children in Sharjah, and texts conceived from the perspectives of water, earth and trees that were written and performed by Nkanga. Light boxes are rendered in the tonal shades of the sunset, and lines of poetry describe the architecture and materiality of the building. At dusk, the interplay of evaporating water and waning light recall the departure of life from Bait Al Aboudi, which now stands as a ruin, while simultaneously imbuing the courtyard enclosure with the residue of salt, the sounds of natural elements and voices, and the gradients of the sunset that signal life’s inevitable return. The work as a whole interacts with and reacts to Sharjah’s weather and climate, and explores the land, the human (and animal) body, the organic and the inorganic, the animate and the inanimate, and the visible and the invisible—manifesting an affective ecology of prosperity and depression, hopeful beginnings and eventual demise, and the possibility of rebirth.

Nkanga has long participated in Sharjah Art Foundation projects and the Sharjah Biennial, with a number of her works and commissions included as part of the seventh, eleventh and fourteenth editions of the Biennial. She was awarded the inaugural Lise Wilhelmsen Prize and received a Special Mention at the 58th International Art Exhibition of the Venice Biennale. Known for exploring ideas surrounding land and natural resources, Nkanga works in a broad spectrum of mediums, including performance, installation, photography, drawing and sculpture. Her large-scale solo exhibition From Where I Stand was recently on view at the Tate St Ives.

Aging Ruins Dreaming Only to Recall the Hard Chisel from the Past is the second permanent, large-scale, site-specific installation at Sharjah Art Foundation after Random International’s Rain Room Sharjah, and it is part of a planned series of permanent works to be located across the city and emirate. The acquisition of this work continues and expands Sharjah Art Foundation’s commitment to the local community, the revitalisation of heritage buildings and architecture, and the activation of neighbourhoods.

Sharjah Art Foundation’s growing collection will be housed mainly in the recently announced Jurainah Art Space, a new 13,000-square-metre building that will be dedicated to the exhibition of more than 1,000 works of twentieth-century and contemporary art rooted in the region and radiating internationally.

Otobong Nkanga works across a broad spectrum of mediums, including performance, installation, photography, drawing and sculpture, in order to explore ideas surrounding land and natural resources. She sometimes serves as the protagonist in her performances, videos and photographs, acting as a catalyst that sets the artistic process in motion.

She completed Advanced Studies in the Performing Arts at DasArts, Amsterdam (2005–2008). Born in 1974 in Kanu, Nigeria, she is currently based in Antwerp.