Sharjah Art Foundation (SAF) announced its autumn 2020 programme which features major solo presentations by artists from the MENASA region and beyond, as well as new editions of annual programmes highlighting the work of lauded regional and international filmmakers, artists and publishers. 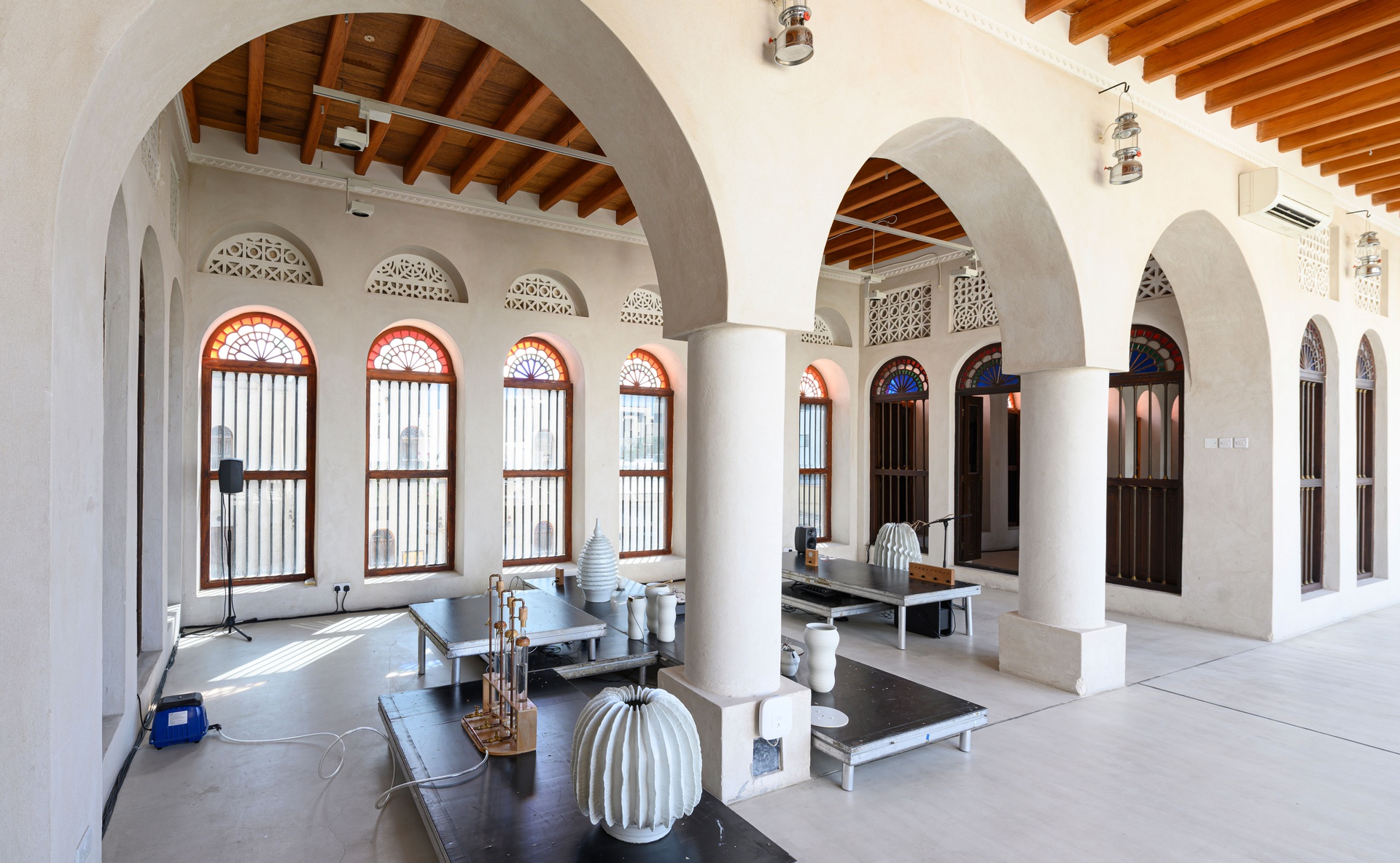 Image
Tarek Atoui, The Ground, 2020. Courtesy of the artist and Vitamin Creative Space

Sharjah Art Foundation (SAF) announced its autumn 2020 programme which features major solo presentations by artists from the MENASA region and beyond, as well as new editions of annual programmes highlighting the work of lauded regional and international filmmakers, artists and publishers.

Two annual programmes will also return for their third editions in autumn 2020, including FOCAL POINT, Sharjah Art Foundation’s art book fair dedicated to presenting printed matter from publishers, artists and collectives across the UAE, the MENASA region and the world; and Sharjah Film Platform, a week-long celebration of emerging filmmakers from around the region and across the globe.

Marking over a decade of collaboration with Sharjah Art Foundation and the surrounding community, Tarek Atoui’s exhibition Cycles in 11 centres around experimental and innovative musical forms and offers audiences opportunities to learn about and explore instrument-making, compositional structure and musical collaboration.

The works in the exhibition, developed over the last 11 years, represent the culmination of the artist’s ongoing exploration of different methods of listening, composition and performance. The instruments Atoui has created are the product of extensive research into music history and tradition as well as collaborations with different experts. Challenging established ways of listening through innovative approaches to sound, the instruments also build on the artist’s earlier project WITHIN, which grew out of years of work with Deaf culture. This project, originating in Sharjah, investigated how deafness can influence the way sound performance, space and instrumentation are understood.

During the exhibition, the heritage house Bait Al Serkal, located in one of the oldest areas in the city of Sharjah, will operate as both a sound lab and a performance and listening space informed by the local tradition of hospitality. In Sharjah’s east coast city of Kalba, another sound lab will be set up close to the emirate’s natural reserves and archaeological sites. Cycles in 11 will also be the starting point for a regional and international residency programme that will extend into 2022. Musicians, composers and artists will be invited to develop new work for the residency, either individually or with different audiences in Sharjah.

This exhibition is curated by Hoor Al Qasimi, Director of Sharjah Art Foundation.

Nowhere Less Now is an episodic work that addresses the dark legacy of British colonialism and Lindsay Seers’ journey through history in search of (the) truth. Presented in cycles, it is conceptually structured around Henri Bergson's philosophy of memory. Seers builds on Bergson's complex proposition of 'intuition as practice' to develop a specific method for the act of filming. Formed from his three fundamental propositions for asking the right creative question, Seers’ method is based on reenactment and evocations that are created to reveal qualitative relationships between things. These connections, which may be conceptual, historical or visual, emerge as she travels to various locations. The resulting installation has a multitude of narrative streams and a collage of imagery as time (past, present, future) is compacted.

The Sharjah iteration of this work, Nowhere Less Now3 [flying saucer], realised by Seers and Keith Sargent, significantly differs from the previous episodes in that it is embedded in a building of Googie architecture. Built next to a British military encampment in the mid-1970s and acquired by Sharjah Art Foundation in 2012 (it became an official venue in 2015), the futuristic structure is known as The Flying Saucer because of its shape. Basing her work on the Gulf Weekly Mirror’s 1978 report about the sighting of a flying saucer hovering over Dubai, Seers uses the unique architectural elements of the building to narrate an alien tourist’s landing and its fascination with the forces impelling humans to move to a pulse, a rhythm.

Nowhere Less Now was originally presented in 2012 at the Tin Tabernacle in Kilburn, London, by Artangel, an acclaimed UK non-profit arts organisation known for its adventurous artist commissions that have been realised in unusual sites and locations across the UK and around the world. The work’s second iteration, Nowhere Less Now 2, was presented in 2014 at the Museum of Old and New Art (MONA) as part of a group exhibition titled The Red Queen. Nowhere Less Now has been commissioned and produced by Artangel, London; Sharjah Art Foundation and the Museum of Old and New Art (MONA), Hobart, Tasmania.

For over thirty years, Zarina Bhimji’s work has staged enquiry into image, object, sound and language, searching for the universal in both its literal and abstract manifestations. This major survey, organised by Sharjah Art Foundation, presents a number of the artist’s seminal works across film, photography and installation. The exhibition features the artist’s early exploration into forms of knowledge overlooked by established systems of order as well as her later exploration of architecture and landscape as arbiters of complex experience and emotion. Each project, embarked upon after meticulous research and recce trips spanning weeks at a time, sees Bhimji sympathetically inhabit sites via her practice: every location becomes an open-air studio, cleared of political or historic specificity.

Growing from ambiguity and observation, her work draws on a deep—and, at times, bleak—consciousness of specific moments. In her film works Out of Blue (2002), Yellow Patch (2011) and Jangbar (2015), constituting a central axis of this exhibition, she uses the camera as a subjective, painterly tool. Unfurling across multiple views and lands (Uganda, the United Kingdom, India, Zanzibar and Kenya, among others), the images ask how we can understand ourselves at different points in time. Most importantly, they question how we take up and rethink our own time—or time beyond our direct experience.

Whether in immersive single-screen films or installations, Bhimji’s work spatialises attitudes, gestures and movements. Allowing sentiment to stand on its own merit, her work confronts our reliance on written narrative instead of manipulations of light, shadow, colour and texture to recall the significance of intuition and cultural inheritance. In slow pans across lush forested landscape, lingering shots of emptied architecture, or stamps and seals on official documents, her compositions of image and object come together to create a cacophony of sound and motion that shape and reshape our understanding of the present moment with quiet immediacy.

This exhibition is curated by Hoor Al Qasimi, Director of Sharjah Art Foundation.

Sharjah Art Foundation will present the third iteration of the Sharjah Film Platform, featuring over 60 local, regional and international short and feature-length narrative, documentary and experimental films, which will be screened online and at the Foundation’s open-air Mirage City Cinema. The film programme also includes the premiere of In the Time of Revolution by Soha Shukayr, an original film supported by the Foundation’s Short Film Production Grant as well as other work-in-progress presentations awarded in this year’s cycle. In addition to the film screenings, the annual festival also features a rich programme of talks and workshops led by renowned filmmakers as well as an initiative connecting talent with film industry professionals, offering a hub through which emerging filmmakers can find collaborators for future projects, exchange ideas and receive valuable feedback.

Sharjah Film Platform is an annual Sharjah Art Foundation initiative launched in 2018 as a resource to support filmmakers in the United Arab Emirates, the surrounding region and around the world. The festival continues the Foundation’s longstanding commitment to film programming and the support of emerging and established filmmakers, film producers, critics and students of film.

Sharjah Art Foundation will present the third edition of FOCAL POINT, an annual art book fair dedicated to presenting varied printed matter and products by publishers and artists from across the UAE, the MENASA region and the world.

FOCAL POINT invites artists and publishers to present their work individually or within curated sections, accompanied by a public programme of talks, performances, screenings, book launches, open studios and themed educational workshops. Catering to the interdisciplinary nature of publishing, FOCAL POINT offers a broad perspective on art publishing, with independent and alternative publishing practices featured alongside a select number of established publishing houses.

All Sharjah Art Foundation exhibitions are free and open to the public. For more information, visit sharjahart.org