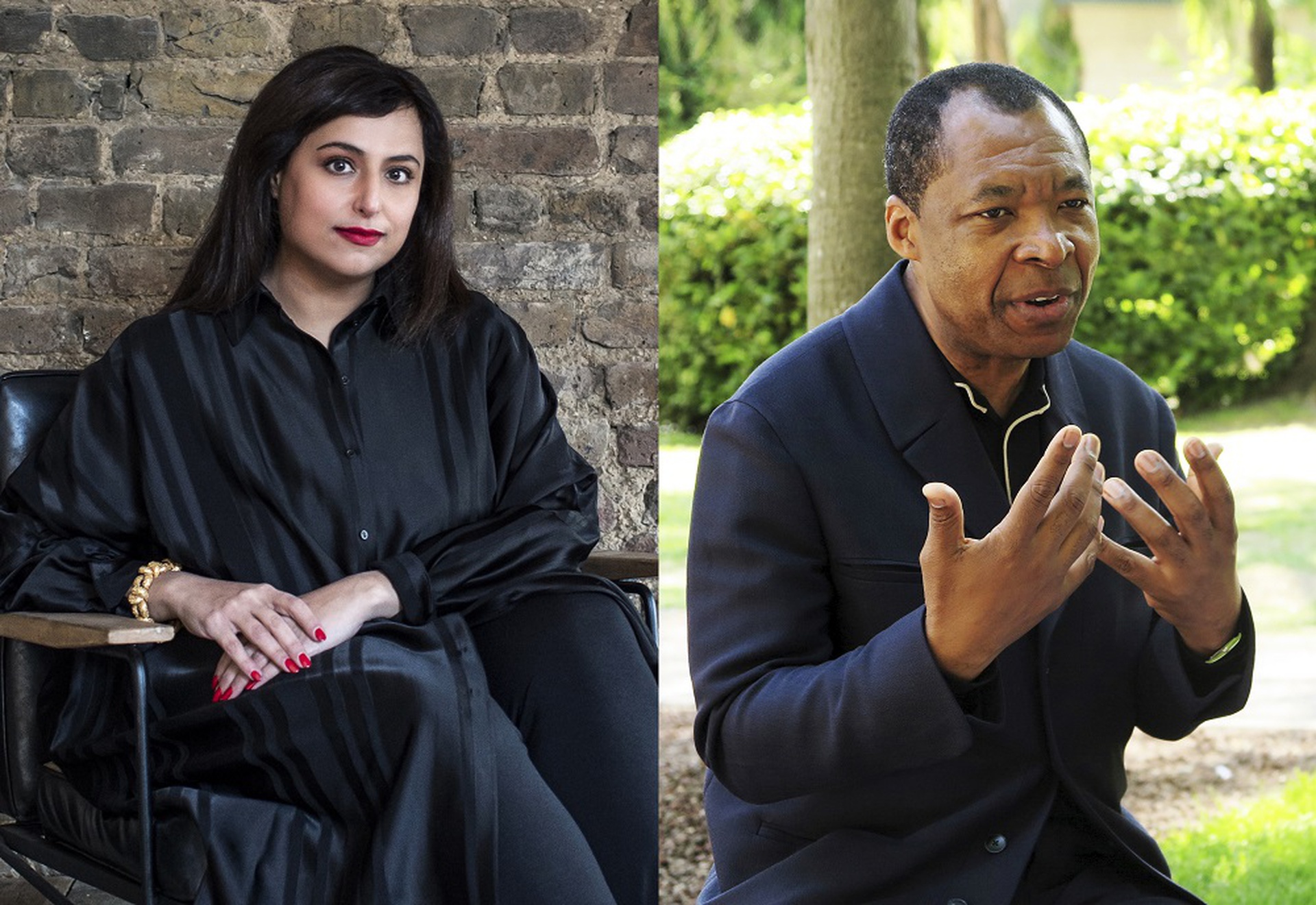 Sharjah Art Foundation (SAF) in Sharjah, UAE, today announced the renowned critic and curator Okwui Enwezor (1963–2019) as curator of the next Sharjah Biennial opening in March 2021. Enwezor conceived the 15th edition of the Sharjah Biennial (SB15) entitled Thinking Historically in the Present as a platform to reflect on the past fourteen editions of the Biennial and to consider the future of the biennial model. In accordance with Enwezor’s wishes, SB15 will be realized with the support of Sharjah Art Foundation Director Hoor Al Qasimi as co-curator alongside a working group of Enwezor’s longtime collaborators: curator Tarek Abou El Fetouh; professor and Founding Director of NTU CCA Singapore Ute Meta Bauer; art historian and Cornell University professor Salah M. Hassan; and art historian and Princeton University professor Chika Okeke-Agulu. Al Qasimi and the SB15 Working Group will oversee the development and implementation of Okwui's curatorial concept in collaboration with an advisory committee composed of architect Sir David Adjaye, artist John Akomfrah and Ashkal Alwan Director Christine Tohmé, who will provide additional consultation on the Biennial.

In his written plans for SB15, which he began developing in spring 2018, Enwezor envisioned the “Sharjah Biennial as a module with which to deal with the disruptive power of artistic monolingualism but also as horizon of the possible to conceive another theoretical space for ‘Thinking Historically in the Present.’”

“It is difficult to overstate the tremendous impact Okwui Enwezor had on contemporary art and its institutions. His visionary work internationalized art world paradigms and laid out an ambitious intellectual project that has shaped the development of so many initiatives and institutions, including the Sharjah Biennial and Sharjah Art Foundation. On a personal level, Okwui’s documenta was deeply influential to my own understanding of the urgent need to create a platform for art and ideas in this region of the world,” said Al Qasimi. “It was an enormous privilege to have been able to call Okwui a colleague and a friend. Together with his close collaborators who have joined the SB15 Working Group and Advisory Committee, we are honored to bring Okwui’s vision for the Biennial to fruition in Sharjah. Our hope is that SB15 will serve as a platform to further explore and expand on his curatorial and intellectual legacy.”

Continuing the Sharjah Biennial’s support for artists from the MENASA region and beyond with an internationally recognized platform for exhibition and experimentation, SB15 will bring together a range of works by contemporary artists, including major commissions, large-scale public installations, performances and films. On view in Sharjah Art Foundation buildings and public spaces across the city’s arts and heritage areas as well as other spaces across the emirate of Sharjah, SB15 will explore the impact of the last fourteen editions of the Sharjah Biennial and the future of the biennial model around the world.

The 2020 edition of Sharjah Art Foundation’s annual March Meeting, a three-day program convening artists, curators and arts practitioners from around the world to discuss vital issues in contemporary art, will inaugurate SB15. Organized around the title and theme of SB15: Thinking Historically in the Present, MM 2020 will focus on the 30th anniversary of the Sharjah Biennial, bringing together former Sharjah Biennial curators, artistic directors and artists as well art historians and critics to examine the role of the Biennial in the region and in the global contemporary art scene. Details about the MM 2020 program, running from 21 to 23 March 2020, will be available in late 2019. Further information about the SB15 concept, artists and projects will be announced in the coming months.

SB15 Working Group member Salah M. Hassan remarked, “Okwui always believed in the Sharjah Biennial as a model for displacing older, Western-based biennials by offering a cutting edge and globally relevant alternative.” Hence, this upcoming edition of the SB15, according to Hassan, “represents Okwui’s insistence on the art exhibition as a platform for engaging with history, politics and society and how these shape our global present.”

Sharjah Art Foundation’s announcement of Sharjah Biennial 15 follows Okwui Enwezor’s bequest of his papers and library to Sharjah’s Africa Institute, of which Al Qasimi is also President and Salah M. Hassan is Director. SB15 Advisory Board member Sir David Adjaye has been commissioned to design the campus of this interdisciplinary academic research institute and think tank, slated for completion in 2023.

Enwezor served as Director, Haus der Kunst, Munich (2011–2018) and Dean of Academic Affairs and Senior Vice-President, San Francisco Art Institute (2005–2009). He was Global Distinguished Professor in the Department of Art History, New York University (2013) and Kirk Varnedoe Visiting Professor at the Institute of Fine Arts, New York University (2012). Among his publications are Postwar: Art between the Pacific and the Atlantic, 1945–1965 (Prestel Publishing, 2017), which he co-edited; Rise and Fall of Apartheid: Photography and the Bureaucracy of Everyday Life (Prestel Publishing, 2013); Contemporary African Art Since 1980 (Damiani, 2010); Antinomies of Art and Culture: Modernity, Postmodernity, Contemporaneity (Duke University Press, 2009); and Reading the Contemporary: African Art from Theory to the Market (Iniva, 1999). In 1994, he co-founded NKA: Journal of Contemporary African Art.

Hoor Al Qasimi is President and Director of Sharjah Art Foundation. Her recent curatorial projects include solo exhibitions of the works of Amal Kenawy (2018), Hassan Sharif (2017), Yayoi Kusama (2016), Robert Breer (2016), Farideh Lashai (2016), Rasheed Araeen (2014) and Susan Hefuna (2014). She was co-curator for Joana Hadjithomas and Khalil Joreige: Two Suns in a Sunset (2016) and major surveys such as When Art Becomes Liberty: The Egyptian Surrealists (1938 –1965) (2016) and The Khartoum School: The Making of the Modern Art Movement in Sudan (1945–Present) (2016–2017). Co-curator of Sharjah Biennial 6 (2003), she has since continued as Biennial Director. She curated the UAE National Pavilion, Venice Biennale (2015) and will also serve as the curator of the second Lahore Biennale, opening in 2020.

President of the International Biennial Association; Chair of the Board, Sharjah Architecure Triennial; Chair of the Advisory Board, College of Fine Arts and Design, University of Sharjah; and President of The Africa Institute, Sharjah; Al Qasimi serves on the Board of Directors for MoMA PS1, New York; Kunst-Werke Berlin e. V.; Ashkal Alwan, Beirut; as well as the advisory boards for Khoj, New Delhi and Darat al Funun, Amman. She is also a member of the Prince Claus Award Committee (2016–present).

About the SB15 Working Group

Tarek Abou El Fetouh is an independent curator who has established innovative initiatives in the Arab world and sought to develop conversations among practitioners both regionally and internationally.

Ute Meta Bauer is a curator, editor (Afterall magazine), Founding Director of the NTU Centre for Contemporary Art Singapore and a professor at the School of Art, Design and Media at Nanyang Technological University, Singapore.

Salah M. Hassan is Director of The Africa Institute, Sharjah, UAE, and Goldwin Smith Professor in the Africana Studies and Research Center and the Department of the History of Art and Visual Studies, Cornell University, Ithaca, US. He is an art historian, art critic, curator and founding editor of Nka: Journal of Contemporary African Art.

Chika Okeke-Agulu specializes in indigenous, modern and contemporary African and African Diaspora art history and theory. He is a professor and Director of Graduate Studies in the Department of Art and Archaeology at Princeton University. He is co-editor of Nka: Journal of Contemporary African Art and maintains the blog Ọfọdunka.

About the SB15 Advisory Committee

Sir David Adjaye OBE is recognized as a leading architect of his generation. In 2000, he formed his studio, Adjaye Associates, with offices in London, New York and Accra and projects spanning North America, Europe, Africa, Asia and the Middle East. His largest project to date, the $540 million Smithsonian National Museum of African American History and Culture, opened on the National Mall in Washington, DC in autumn 2016.

John Akomfrah is a respected artist and filmmaker whose works are characterized by their investigations into memory, post-colonialism, temporality and aesthetics and often explore the experiences of migrant diasporas globally.

Christine Tohmé is the Founding Director of Ashkal Alwan, a non-profit organization established in 1993 in Beirut that aims to support contemporary artistic and cultural practices through its numerous initiatives. She curated Sharjah Biennial 13: Tamawuj in 2017.