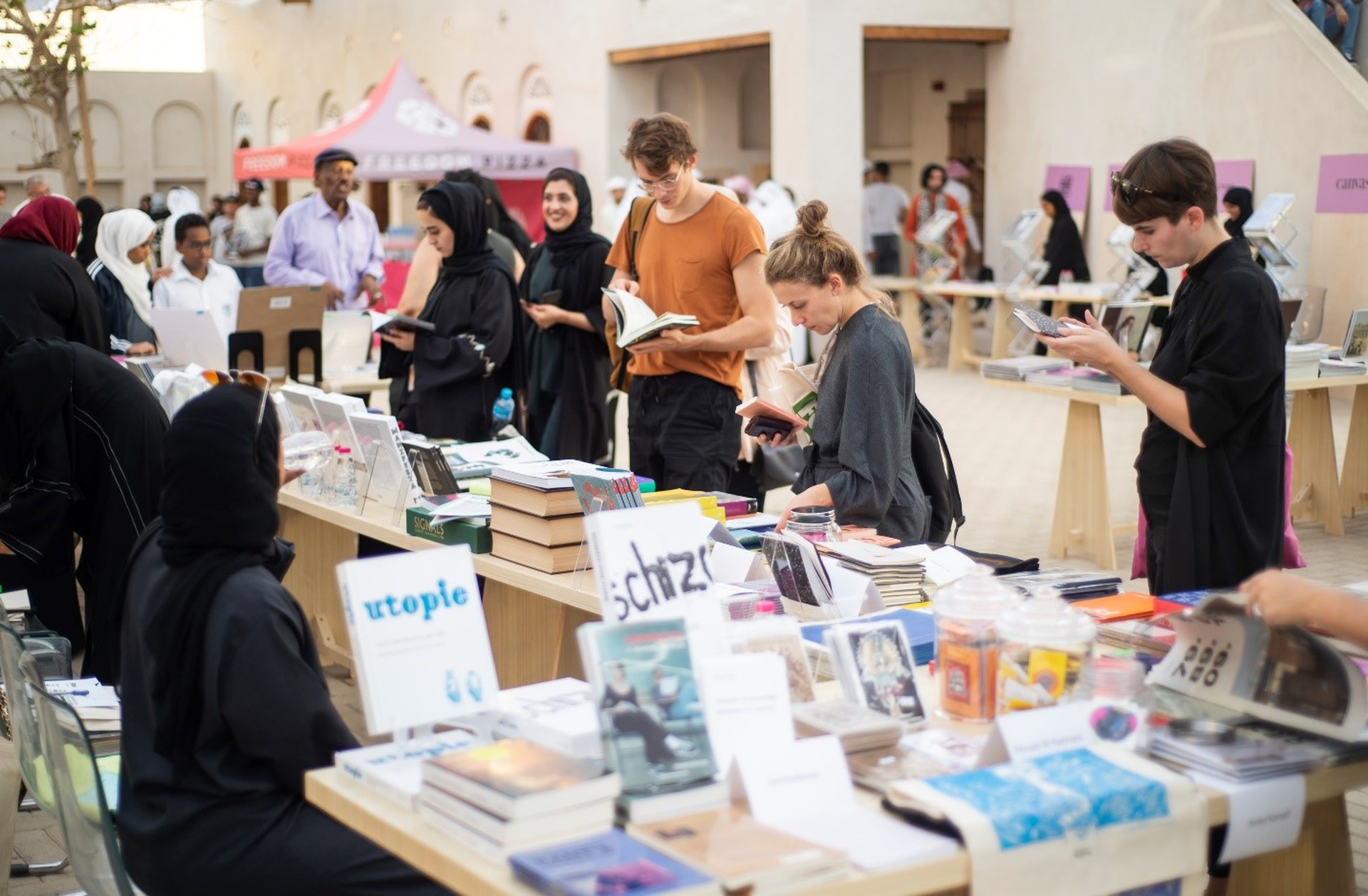 Sharjah Art Foundation today announced the recipients of the second FOCAL POINT Publishing Grant, an annual fund supporting artistic and research-driven publishing practices that advance scholarly examination of art history in the region and the wider world. Grant recipients Ali Essafi, Ridha Moumni, Gabriella Nugent and hākārā were announced on the opening day of the third FOCAL POINT Art Book Fair in the Foundation’s heritage venue Bait Obaid Al Shamsi. Selected from more than 100 submissions received after an international open call, the winners will share a total of 27,000 USD to support research projects in the Long-Form Essay and Publication Reprint categories. To be completed over the course of the next year, the projects will be published by Sharjah Art Foundation and presented at future editions of the FOCAL POINT Art Book Fair.

In line with the overarching theme of Sharjah Biennial¬¬ 15 (due to open in spring 2022), which is highlighted in its title—Thinking Historically in the Present—the grant’s open call was directed towards supporting art historical research focusing on global modernism in the MEASA (Middle East, Africa and South Asia) region. Individual scholars, research teams, publishing houses and public institutions were all invited to submit proposals.

More information about the winning projects is provided below. The first three projects are long-form essays; the final project is a publication reprint.

In his long-form essay, Ali Essafi will examine the North African tradition of the Halakat, explored as a lost experimental narrative format through the works of three pioneering filmmakers of the postcolonial Maghreb: Memory 14 (1971) by Ahmed Bouanani (Morocco), Mohammadia (1974) by Ahmed Bennys (Tunisia) and How Much I Love You (1985) by Azzedine Meddour (Algeria). These films deconstructed the official discourse of colonial history and were either censored or marginalised. They have since been mostly ignored by local and international audiences.

Ridha Moumni’s text will explore the political legacy of the School of Tunis (1943–1979) in fostering the cult of Habib Bourguiba and his prominence in Tunisian culture and history. Challenging the predominant historical narrative that the School of Tunis operated independently of the State, the essay will argue that its founding artists had a close relationship with Tunisia’s first independent government. Their paintings and sculptures filled the new government’s modernist edifices, thereby shaping the nation’s urban landscapes and creating a distinctive iconography in service of the independent nation’s first regime.

Gabriella Nugent’s essay will situate Egyptian artist Inji Efflatoun’s artwork within broader global networks and explore her relationship with Mexican muralists David Alfaro Siqueiros, Diego Rivera and José Clemente Orozco, specifically her 1956 encounter with Siqueiros, which prompted her interest in social realism. Through the examination of an archive of personal correspondence, the research hopes to shed light on how the friendship influenced Efflatoun’s adoption of the language and philosophy of Mexican muralism to address the political situation in Egypt and how she challenged the muralists’ masculinist vision of the world rooted in European modernism.

The online bilingual journal hākārā proposes the mapping of regional modernism in India in the form of a visual arts reader. Bringing together critical essays, travelogues, symposia, images and narrative writing from the archives of Marathi periodicals from the 1940s to the 1960s, the reader will reproduce and translate into English 10 to 12 historical texts published originally in Marathi, which will be presented alongside a supporting introductory essay. Researched and introduced by Ashutosh Potdar (FLAME University, Pune) and Noopur Desai (Asia Art Archive, New Delhi), the reader will attempt to provide rich, representative formulations of modernism that can lead to a possible reassessment of the social and cultural movement from a contemporary perspective.

Publishing and supporting publishing practices are central to Sharjah Art Foundation's work. Since its establishment in 2009, the Foundation has published a variety of books on modern and contemporary art, including artist books, catalogues and scholarly volumes. The Foundation supports the research-based efforts of visiting artists, curators and scholars year-round and publishes catalogues for biennials and curated exhibitions, which are made available to local, regional and international audiences interested in contemporary art and publishing.

The third edition of the FOCAL POINT Art Book Fair runs from 16 to 19 December 2020 in Bait Obaid Al Shamsi, Arts Square. This iteration of the fair features printed matter from the MEASA region, such as artist books, academic volumes and journals, as well as zines and other artistic production by UAE creatives. Usually host to interdisciplinary art publications and independent and alternative practices, FOCAL POINT 2020 has expanded its reach to include titles on art history, theory and criticism, many of which have been sourced through academic presses. The four-day event also features a variety of creative workshops suitable for children of all ages and their parents along with live music performances by local bands Edges N Sways and Godfist.

The fair is free to attend; however, online booking is encouraged to ensure the safety of our visitors and community. Bookings can be made on this link.

Participation in the workshops is also free, but prior registration is required for these sessions. All materials are provided by the Foundation. To register, contact children.education@sharjahart.org.

Ali Essafi works as a filmmaker, visual artist and curator. His films include Général, Nous Voilà! [General, Here We Come], Le Silence des Champs de Betterave [The Silence of the Beet Field], Ouarzazate Movie and Shikhat’s Blues, which have been screened in international institutions and exhibitions such as the Museum of Modern Art (MoMA), New York (2011), and the Triennale de Paris (2012).

Born in Morocco in 1963, Essafi studied psychology in France and then entered the world of filmmaking. In 2002, he returned to Morocco, where he worked as an art director and advisor to the Moroccan public television channel. At the same time, he embarked on lengthy research projects on North African film and visual archives, which led to films that were screened at Sharjah Biennial 10 (2011) and the Berlinale, an installation presented at DAK’ART 2014 and publications in Germany, France, Austria and Morocco. His latest archival films, Crossing the Seventh Gate and Before the Dying of the Light, premiered at the Berlinale (2017) and IDFA (2020), respectively.

He is a member of various art and film institutes, including the Academy of Motion Picture Arts and Sciences.

Ridha Moumni is a curator and historian of art and archaeology with an academic and professional specialisation in antiquity and the early and modern art of Tunisia. Trained in France, he earned his PhD at Sorbonne University before joining the Villa Medici as a fellow of the French Academy in Rome. In 2014, he returned to Tunis, where he worked on cultural projects and curated exhibitions of photography and modern art, among them L’éveil d’une nation, l’art à l’aube de la Tunisie moderne (1837–1881) [The awakening of a nation, art at the dawn of modern Tunisia (1837–1881)] (2016). Currently Aga Khan fellow at Harvard University, he is conducting research on the collections of the first Tunisian dignitaries to excavate ancient Carthage. A second project explores the role of the arts in nation-building in postcolonial Tunisia. With Elsa Despiney, Moumni recently published Artistes de Tunisie (Cérès Editions, 2019), a book on Tunisian visual artists from the nineteenth century to the Tunisian Revolution in 2010.

Gabriella Nugent is an art historian based in London. She holds a PhD in the History of Art from University College London (UCL). She is a Teaching Fellow at the School of Oriental and African Studies (SOAS), London, and she has also taught at UCL and the Slade School of Fine Art.

She is the Assistant Curator of HacerNoche II: Promised Land, conceived by Elvira Dyangani Ose, which is an exhibition of the work of more than 50 international artists across 16 venues in Oaxaca, Mexico. Nugent has coordinated the display of Inji Efflatoun’s work (on loan from the Barjeel Art Foundation) alongside the Mexican muralists. Working on this display prompted her proposed research project for the FOCAL POINT Publishing Grant.

Nugent has current and forthcoming publications in African Arts, Oxford Art Journal, Nka: Journal of Contemporary African Art and MoMA’s post: notes on art in a global context. Her book Colonial Legacies: Contemporary Lens-Based Art on, of and from the Democratic Republic of Congo is under review at Leuven University Press. She has also written on modernist painting traditions in the Congo and East Africa from the 1960s¬ to the 1980s. Nugent’s research has been funded by UCL, the Society for French Studies and the Association for Art History.

hākārā is an online bilingual platform that explores and practises newer ways of producing and appreciating creative expression while encouraging dialogue between different fields of expression. Published online in a freely accessible and interactive format, hākārā considers a rich and diverse body of creative work, focusing on creative and critical writing in Marathi and English across both literary and visual forms of expression as well as areas that address the diversity and synergies implicit in literary and visual cultures. Interestingly positioned within the academic and non-academic spheres, hākārā is interested in the sharing of research, speculations, and literary and visual work presented in reflective ways that respond to current debates while being attentive to the nuanced understanding and interconnectedness of content, form and society. hākārā particularly encourages innovative literary and visual images and critical artistic practices and developments that inform the contemporariness of the medium (and its pasts and futures) and examine the formal qualities of words and images in changing contexts.

Edited by Ashutosh Potdar and Noopur Desai, hākārā has been published online in English and Marathi since May 2017. Each issue has a particular thematic focus.