Sharjah Art Foundation's (SAF) autumn 2019 programme features major solo exhibitions of influential artists, as well as the return of annual programmes bringing together artists, curators, scholars and the public to explore new innovations in both film and printed matter. 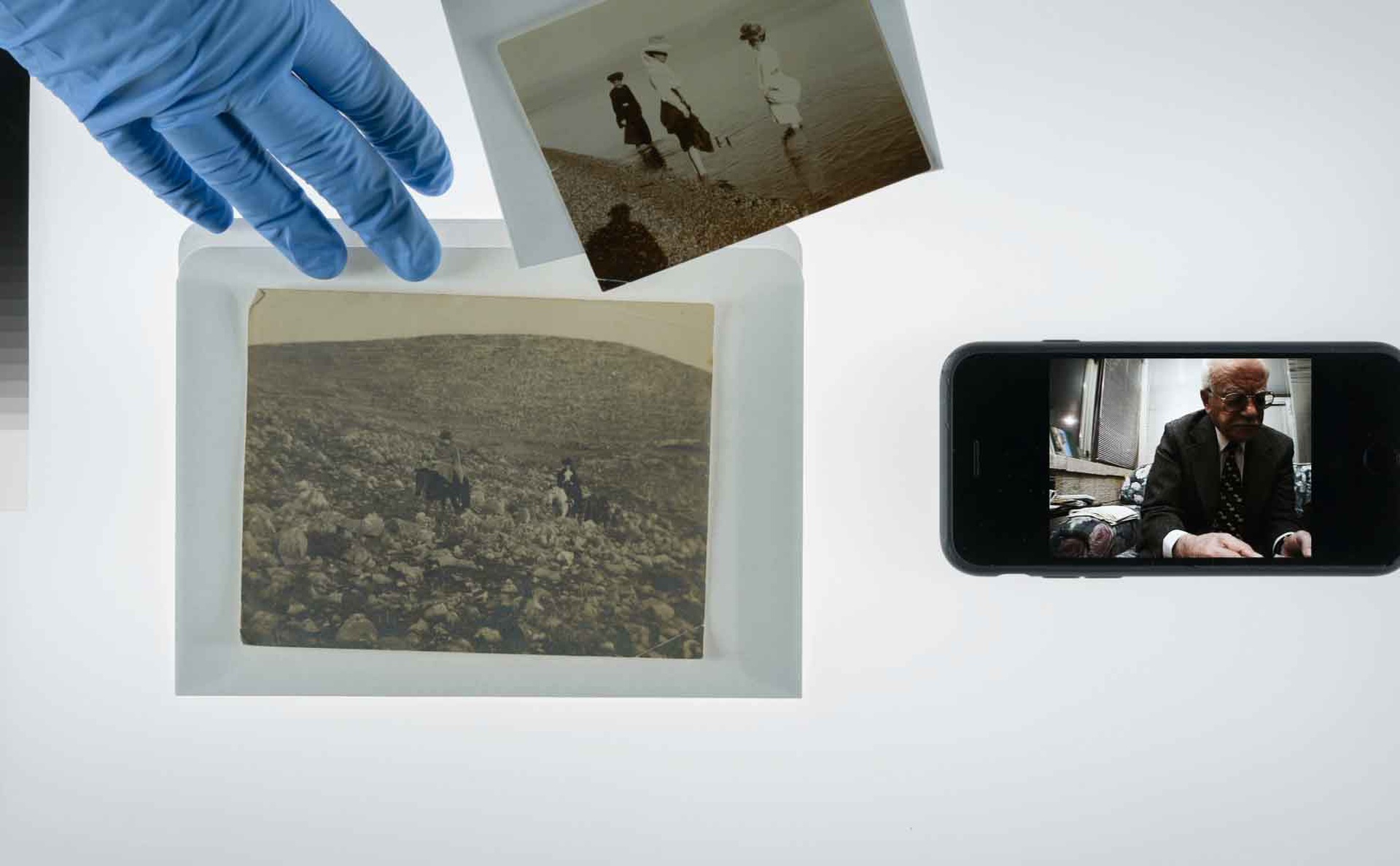 Image
Akram Zaatari, "On Photography, Dispossession and Times of Struggle," 2017. Courtesy of the artist and Sfeir-Semler, kurimazutto and Thomas Dane and Galleries.

Sharjah Art Foundation's (SAF) autumn 2019 programme features major solo exhibitions of influential artists, as well as the return of annual programmes bringing together artists, curators, scholars and the public to explore new innovations in both film and printed matter.

The foundation’s autumn 2019 season includes a major retrospective of artist Monir Shahroudy Farmanfarmaian (1922–2019), exploring the artist’s six-decade practice across sculpture, jewellery and collage; an exhibition reflecting on the evolution of the Arab Image Foundation and its collections through the work and contributions of its co-founder Akram Zaatari; a survey of paintings and sculptural works by artist Adam Henein; the first solo exhibition in the region of multi-disciplinary artist Bani Abidi which includes two new commissions; and a solo show of 2019 Bonnefanten Award for Contemporary Art winner Marwan Rechmaoui.

In addition, the foundation will present the second exhibition in a series planned to run over four years, Sharjapan, celebrating aspects of contemporary Japanese art, this year focused on performance and sound-based installations; as well as the second edition of the annual Air Arabia Curator in Residence exhibition. The foundation will also mount an exhibition of commissioned works created by the March Project 2019 artists in residence.

Two annual programmes will also return for their second editions in autumn 2019, including FOCAL POINT, Sharjah Art Foundation’s art book fair devoted to presenting printed matter from publishers, artists and collectives across the UAE, the MENASA region and the world; and Sharjah Film Platform, a ten-day celebration of emerging filmmakers from around the region and across the globe.

Sharjah Art Foundation, in collaboration with Sharjah Museums Authority, presents the exhibition Lasting Impressions: Adam Henein, a survey of the artist’s paintings and sculptures from the 1950s until today. Recognised as one of the most prominent sculptors in the Arab world, Henein uses simple lines and abstract forms to create sculptures and modernist figures in a poetic manner. Curated by Sheikha Noora Al Mualla, this exhibition showcases more than 70 works referencing universal themes, Egyptian heritage, and Ancient Egyptian symbols.

Akram Zaatari: Against Photography. An Annotated History of the Arab Image Foundation

Akram Zaatari: Against Photography reflects on the evolution of the Arab Image Foundation, the Beirut-based foundation dedicated to collecting, studying and disseminating the photographic heritage of Middle East, North Africa and the Arab diaspora through the work and contributions of its co-founder, Akram Zaatari. Zaatari’s interdisciplinary practice combines the roles of image-maker, archivist, curator and critical theorist, often exploring the Lebanese postwar condition, particularly the televised mediation of territorial conflicts and wars.

Over the past twenty years, Zaatari’s work with the Arab Image Foundation has pushed to expand the definition of photography and has explored the importance of the medium to Lebanon and the region at large. This exhibition engages directly with the debates that have coexisted within the Arab Image Foundation about provenance, preservation and authorship in image-making.

The exhibition opening will be accompanied by a talk between the artist and the curator. Further details are available at sharjahart.org.

Sharjah Art Foundation in partnership with Air Arabia presents ’32: The Rescore, a research project and exhibition developed by the second Air Arabia Curator in Residence, Bhavisha Panchia. Taking the First Congress of Arab Music, held in Cairo in 1932, as both anchor and point of departure, the exhibition attends to the dis(continuities) of identity, history and culture embedded in music. Instruments, notation, scale and composition are taken as sites of enquiry, addressing ideological and epistemological schisms between differing world views through musical traditions, registers and practices.

The exhibition will feature a range of media, including vinyl records, sound works, video, performance and installation, to show how music is an agent of cultural and political force.

Sharjah Art Foundation presents a major retrospective of the prominent Iranian artist Monir Shahroudy Farmanfarmaian (1922–2019) bringing together more than 70 works spanning her six-decade career. Sunset, Sunrise offers a rare opportunity to rediscover the breathtakingly kaleidoscopic nature of Farmanfarmaian’s 1970s sculptures and to encounter drawings, jewellery and previously unseen collages from the 1980s, alongside some of the last drawings the artist ever created.

Encapsulating histories of both East and West, Sunset, Sunrise reflects a life lived between two cultures, as the artist’s early involvement with graphic design and experimental modern abstraction in New York City gave way to a period of intense research into traditional craftsmanship and folk art in Iran’s more remote regions. Western avant-garde principles were maintained by the artist while she delved into Persian mysticism and simultaneously evoked the socio-political Islamic landscape as well as the easily recognisable geometry of Iran’s artistic and architectural heritage. Embedded in this collision of cultures, Farmanfarmaian navigated a path to her own distinct form of rich geometric abstraction.

For more than fifteen years, artist Bani Abidi’s work has engaged with questions of personal memory, patriotism and geopolitics through the lens of present-day Pakistan and the larger histories of South Asia. With a wry sense of humour and attention to the performative aspects of daily life, the artist has approached her subject matter through a cast of minor protagonists—real and imagined, human and inanimate—which come to define a place and its culture.

The major survey of Abidi’s works at Sharjah Art Foundation includes well-known video, photography, sound and installation works as well as two new commissions. The Lost Procession (2019) is a video and sound installation that focuses on the persecuted Hazara community, who have relocated from the Pakistani city of Quetta to Germany in recent years. The exhibition will also feature a presentation of objects, prints, books and other materials that reflect on the vitality of the 1990s Karachi art scene, which was formative to Abidi’s development as an artist.

An exhibition of site-specific commissions in photography, sculpture and installation will be presented as the culmination of this year’s March Project, an annual educational residency programme that provides opportunities for young artists from the region and beyond to research, realise and present site-specific works at Sharjah Art Foundation. During the seven-month residency, March Project participants conduct extensive research through a series of site visits and discussion sessions with the foundation’s professional support.

The March Project 2019 artists are Asma Belhamar, Farah Al Qasimi, May Rashed and Saeed Almadani from the United Arab Emirates, Filwa Nazer from Saudi Arabia and Mario Santanilla from Colombia.

Sharjah Art Foundation will present the 2019 Bonnefanten Award for Contemporary Art (BACA) exhibition Marwan Rechmaoui: Slanted Squares. The most important award for international contemporary art in the Netherlands, the award granted by the Bonnefanten Museum is a tribute to a living artist with an exceptional oeuvre and demonstrable influence on other artists, exhibition makers and art professionals.

Using industrial materials such as concrete, rubber, tar and glass to create work to investigate the geographical, architectural, cultural dynamics and history of Beirut, Lebanese artist Marwan Rechmaoui’s BACA exhibition brings together three bodies of works which are centred around the course of construction buildings. Rechmaoui takes physical construction sites and the foundations of buildings to document history as well as using them to create metaphors for the processes that take place as part of the archaeology of a city, such as digging, excavating, stabilizing and possibly rebuilding.

Slanted Squares is organised by the Bonnefantenmuseum, Maastricht and Sharjah Art Foundation on the occasion of the Bonnefanten Award for Contemporary Art 2019 (BACA). The exhibition is curated by Zeynep Öz and is accompanied by a book, Marwan Rechmaoui: Slanted Squares, including texts and illustrations by Marwan Rechmaoui, Zeynep Öz, Hoor Al Qasimi, Stijn Huijts, and Akram Zaatari, realised through a collaboration between Bonnefantenmuseum, Maastricht and Sharjah Art Foundation.

Sharjah Art Foundation will present the second annual edition of FOCAL POINT, an annual art book fair dedicated to presenting varied printed matter and products by publishers and artists from across the UAE, the MENASA region and the world, from 14 to 16 November 2019.

FOCAL POINT invites regional and international artists and publishers to present their work individually or within curated sections, accompanied by a public programme of talks, performances, screenings, book launches, open studios and themed educational workshops. Catering to the interdisciplinary nature of publishing, FOCAL POINT offers a broad perspective on art publishing, with independent and alternative publishing practices featured alongside a select number of established publishing houses.

SHARJAPAN2, the second iteration of a four-year collaboration with Yuko Hasegawa, Artistic Director of the Museum of Contemporary Art, Tokyo, Professor at Tokyo University of the Arts and curator of Sharjah Biennial 11 (2013), will focus on performance and sound-based installations that imagine new ecologies of nature and materiality.

Reflecting the links between individual agency and collective humanlike relationality, Yuko Mohri's project will contain a group of self-playing readymades that, as in her other works, convey intangible energies in everyday life. Elsewhere, a live installation by sound artist Tomoko Sauvage will feature an amplified sound recording of a large block of slowly melting ice, centring the oft-marginalised experiences of hearing and listening alongside the more conventional visuals of the looming threat of climate change.

Musical performances will include traditional Japanese drumming that is highly technical and sophisticated, yet also affects or gives impact to the fundamentally visceral, physical and primal senses. SHARJAPAN2 will also feature an Android Opera by Keiichiro Shibuya conducted by a humanoid AI dubbed ‘Alter2’. This performance, Scary Beauty, will explore the relationship between terror and beauty, and humanity's fear of being made redundant in the future.

Introducing the unique Japanese philosophy of animism– which imbues respect for the mutual relationships between human and non-human beings in contemporary art, this selection of installations and performances considers the past, present and the future of non-human realms.

Sharjah Film Platform is an annual Sharjah Art Foundation initiative launched in 2018 as a resource to support filmmaking in the United Arab Emirates, the surrounding region and beyond. In addition to the film programme, SFP supports two other core components: a public programme featuring workshops and discussions, and the Short Film Production Grant, which results in the premieres of the grant recipients’ films. Together, the three-pronged platform continues the foundation’s longstanding commitment to film programming, commissions and productions, and to the support of emerging and established filmmakers, film producers and critics.