Previously on view internationally at the Los Angeles County Museum of Art (2015–2016); Yuz Museum, Shanghai (2015); Museum of Modern Art, New York (2013) and Barbican Centre, London (2012), Rain Room is the first of a series of permanent installations Sharjah Art Foundation has planned for sites across the Emirate. 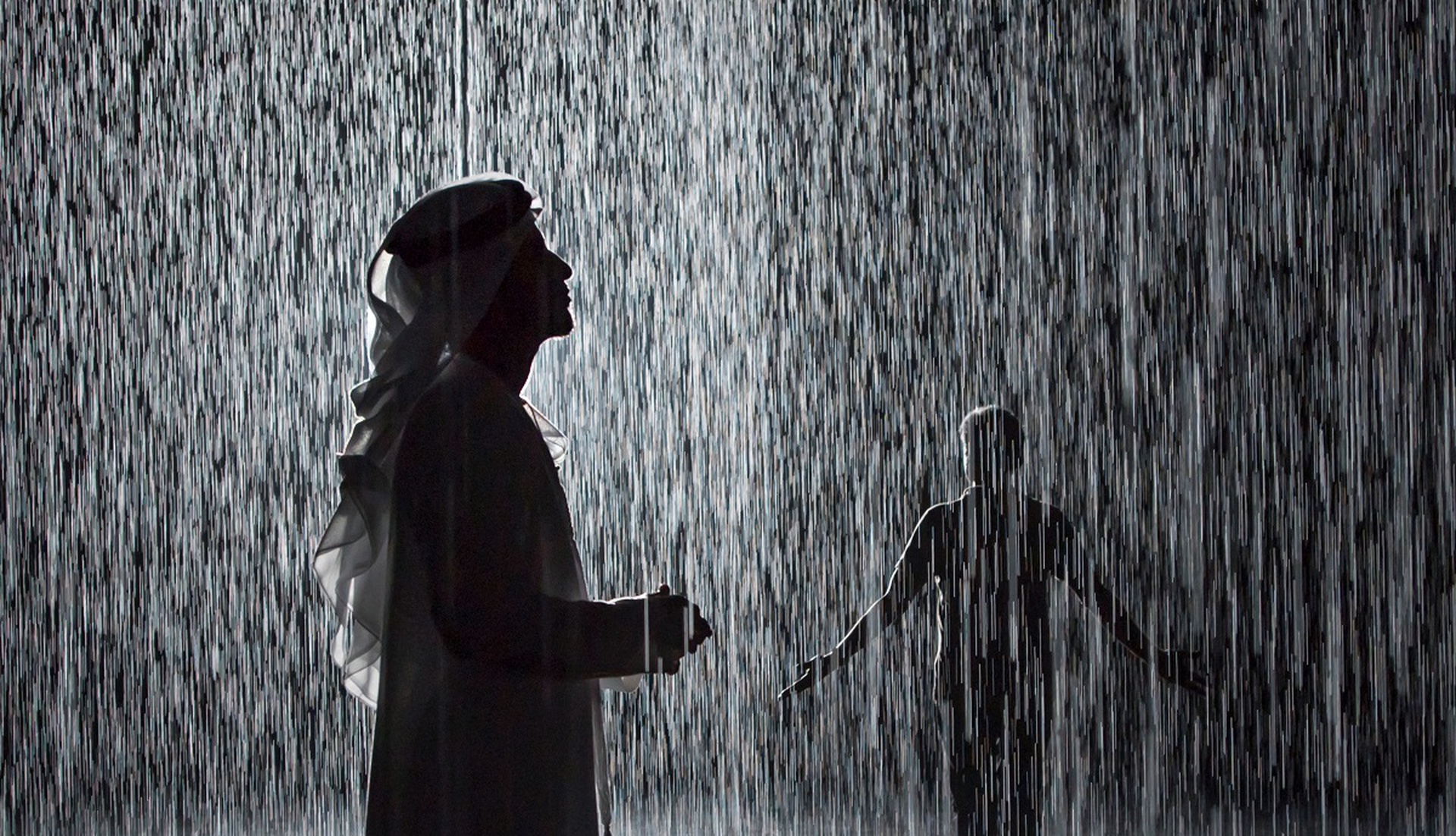 Previously on view internationally at the Los Angeles County Museum of Art (2015–2016); Yuz Museum, Shanghai (2015); Museum of Modern Art, New York (2013) and Barbican Centre, London (2012), Rain Room is the first of a series of permanent installations Sharjah Art Foundation has planned for sites across the Emirate.

‘That Rain Room has found a permanent home at Sharjah Art Foundation is a humbling thought,’ said Hannes Koch and Florian Ortkrass of Random International. ‘The organisation [Sharjah Art Foundation] is unparalleled in its approach to art, exhibition-making and relationships with a wider public audience. Sharjah Art Foundation offers an experience of art that is extraordinarily stripped-down, leaving the viewer to engage with the raw and often elemental forces inherent to the work on display.’

‘When Random International artists Florian Ortkrass and Hannes Koch invited me to visit the Rain Room in 2012, seeing how the Barbican’s audience responded and interacted with the work made me think about the effect this type of project could have in Sharjah. We began planning the Sharjah Rain Room from that time,’ said Sharjah Art Foundation Director Hoor Al Qasimi. ‘Over the years we have exhibited a number of large-scale immersive installations through the Sharjah Biennials and our regular exhibitions programme, but this is the first of a series of projects that are planned as permanent works in locations across the Emirate.’

An immersive work by the London-based collective Random International, Rain Room is an installation in which perpetual rainfall pauses wherever and whenever someone moves through the space. Visitors are thereby both exposed to and protected from the continuous rain. Enhancing sense and instinct, the artwork forms an intersection between technology and nature.

Using recycled water that is continuously tested and carefully treated, Rain Room is equipped with self-cleaning filters and requires a relatively small amount of water.

Rain Room’s permanent location in Al Majarrah Park continues and expands Sharjah Art Foundation’s commitment to the local community. After in-depth research and surveys were conducted with the area’s residents, the site of the Rain Room was chosen and specially constructed to emphasise public participation and engagement.

Tickets to Rain Room can be purchased online or directly at the venue. For more information, click here.

Sharjah Art Foundation is an advocate, catalyst and producer of contemporary art within the Emirate of Sharjah and the surrounding region, in dialogue with the international arts community. Under the leadership of founder Hoor Al Qasimi, a curator and artist, the foundation advances an experimental and wide-ranging programmatic model that supports the production and presentation of contemporary art, preserves and celebrates the distinct culture of the region and encourages a shared understanding of the transformational role of art. The foundation’s core initiatives include the long-running Sharjah Biennial, featuring contemporary artists from around the world; the annual March Meeting, a convening of international arts professionals and artists; grants and residencies for artists, curators and cultural producers; ambitious and experimental commissions and a range of travelling exhibitions and scholarly publications.

Established in 2009 to expand programmes beyond the Sharjah Biennial, which launched in 1993, the foundation is a critical resource for artists and cultural organisations in the Gulf and a conduit for local, regional and international developments in contemporary art. The foundation’s deep commitment to developing and sustaining the cultural life and heritage of Sharjah is reflected through year-round exhibitions, performances, screenings and educational programmes in the city of Sharjah and across the Emirate, often hosted in historic buildings that have been repurposed as cultural and community centres. A growing collection reflects the foundation’s support of contemporary artists in the realisation of new work and its recognition of the contributions made by pioneering modern artists from the region and around the world.

Random International is a collaborative studio for experimental practice within contemporary art. Founded in 2005 by Hannes Koch and Florian Ortkrass, the studio now includes a larger team in London and Berlin. Questioning aspects of identity and autonomy in the post-digital age, Random International’s work invites active participation.

In 2017, their latest piece Zoological debuted at London’s Roundhouse as part of Wayne McGregor’s +/- Human. The studio’s work has also formed part of the Lichtsicht Biennale (2015), Ruhrtriennale (2013) and Moscow Biennale of Contemporary Art (2011).

Solo presentations of their work were exhibited at Lunds konsthall, Sweden (2014), Carpenters Workshop Gallery, Paris (2012) and Pace Gallery, New York (2016). Their work is in the collections of Sharjah Art Foundation, MoMA, YUZ Museum, LACMA and V&A, where their Swarm Study / III is on long-term display.