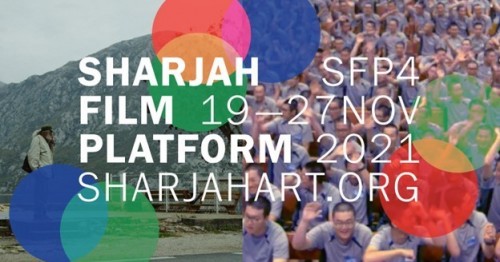 Sharjah Art Foundation (SAF) today announced the programme for the fourth edition of Sharjah Film Platform (SFP4). The Foundation’s annual film festival supports emerging and established filmmakers in the MENASA region and beyond through film screenings and a public programme of talks and workshops, grants and professional development initiatives. Taking place from 19 to 27 November 2021, SFP4 features in-cinema screenings of over 50 films, including world and regional premieres, culminating in the presentation of awards for submitted films in experimental, documentary and narrative categories. A selection of the films will also be available online.

In parallel with the screenings, SFP4 will present public talks and masterclasses with an international roster of filmmakers and practitioners, children’s workshops and the second iteration of Industry Hub, an initiative launched by SAF in 2020 to deepen its support of film production and distribution regionally and internationally. This year’s festival advisory committee consists of Richie Mehta (film director, writer), Maike Mia Höehne (film professor, Artistic Director of Kurzfilm Festival Hamburg) and Kerem Ayan (Director of Istanbul International Film Festival).

‘The annual Sharjah Film Platform plays an increasing critical role in the realisation of our commitment to supporting and presenting the work of emerging filmmakers from the UAE, the MENASA region and beyond. New programmes, such as the Industry Hub, introduced last year, have already helped projects by regional filmmakers into production and we continue to offer grants to support the making of new work,’ said SAF President and Director Hoor Al Qasimi. ‘This year we introduce curated film programmes and a series of workshops and events for children. By bringing together local, regional and international filmmakers and audiences, the Platform gives us an opportunity to celebrate experimentation and creativity and to explore critical topics such as representation, identity and belonging.’

The Foundation also announced the winners of its 2021 Short Film Production Grant, which provides support for the creation of original short films. This year’s winners are Maaria Sayed and Mariam Al Serkal for Unveiling Selma (2022), a story about an Emirati woman rediscovering her womanhood; Randa Maroufi for L’mina (2022), an imaginative depiction of a former mining town in Morocco; and Janus Victoria for The Myth of Manila (2021), which documents the plight of a reporter in pandemic-afflicted Manila and will premiere this year during SFP4. Unveiling Selma and L’mina will screen at SFP5.

The 2021 film programme opens with the screening of two feature films supported by the Foundation’s Short Film Production Grant: The Myth of Manila (2021) by 2021 winner Janus Victoria and Notes for a film about Gilgamesh (2022), a work in production by 2020 winners Pelin Tan and Anton Vidokle. SFP4 features screenings of more than 50 films submitted through this year’s SFP open call and works by invited filmmakers, including world premieres and regional premieres. This year’s festival also includes two curated programmes: ‘Director in Focus’ highlighting the work of award-winning Palestinian director Michel Khleifi, whose films portray the lives of Palestinians from a social and political standpoint under Israeli occupation and ‘Her Journey’, presented in partnership with Istanbul Modern, exploring complex, women-centric stories in Turkish cinema through 10 feature-length, documentary and short films.

At the conclusion of the festival, SAF will present awards to outstanding films in the experimental, documentary and narrative categories. The jury members include Bani Khoshnoudi (artist and filmmaker), Akosua Adoma Owusu (filmmaker), Talal Derki (filmmaker)

In addition to the film screenings, SFP4 features talks and masterclasses—free and open to the public—that examine topics relevant to contemporary filmmaking, including archival practices, the art of the film score and inclusivity and representation in the film industry. Session speakers include notable filmmakers and industry professionals from the region and beyond, including BAFTA award–winning documentary filmmaker Kim Longinotto (Divorce Iranian Style, Shooting the Mafia); Stefanie Schulte Strathaus, Co-Director of the Arsenal Institute for Film and Video Art, Berlin; two-time Academy Award and Emmy nominated documentary filmmaker James Longley (Angels Are Made of Light, Iraq in Fragments, Gaza Strip); visual artist Basma Al Sharif, who was awarded a Jury Prize at Sharjah Biennial 9 for We Began By Measuring Distance; Jihan El-Tahri, award-winning filmmaker and Director of the Berlin-based DOX BOX; two-time Academy Award winner and five-time Academy Award nominated composer A. R. Rahman (Slumdog Millionaire and 127 Hours); filmmaker Mohamed Al-Daradji whose multi-award-winning Son of Babylon screened at Sundance and the Berlin International Film Festival.

SAF will present the film screenings and talks programme in a hybrid format, with some featured events available online through the festival’s virtual platform, and all films screening in cinemas at venues across Sharjah, including the Sharjah Institute of Theatrical Arts and the open-air Mirage City Cinema in Al Mureijah Square. The Foundation’s Collections Building will host workshops designed to give children hands-on experience with filmmaking essentials while an accompanying film will screen at the Flying Saucer building in Dasman.

Embassy of France in the UAE

Returning to SFP for the second year is the Industry Hub, a programme that offers filmmakers opportunities to develop their projects, receive production funding and secure vital distribution support for completed films. The Industry Hub comprises the Pitching Forum, an open call competition for feature-length screenplays; the Script Lab, a professional scriptwriting course; and the Virtual Film Distribution Market, a platform dedicated to supporting regional and international film distribution for short and feature-length films across genres. The 2021 Industry Hub is supported by SFP4 industry partner Sharjah Media City (Shams).

A limited number of Festival Passes are now available for purchase online.

Festival Pass–Cinemas and Online (120 AED): Provides access to all screenings in cinemas and online.

A selection of the festival’s programme will stream online.*

Tickets for individual screenings will soon be available online.

Please note that purchases of Festival Pass and Tickets implies agreement with the below:

Sharjah Film Platform is an annual Sharjah Art Foundation initiative launched in 2018 as a resource to support emerging and established filmmakers. SFP encompasses four core components: a programme of film screenings; a series of talks, workshops and discussions; the annual Short Film Production Grant; and the recently launched Industry Hub initiative, which supports film production and distribution in the MENASA region and internationally. Together, the platform continues the Foundation’s longstanding commitment to film programming and commissions as well as support for emerging and established filmmakers, film producers, critics and students.

Sharjah Art Foundation is an advocate, catalyst and producer of contemporary art within the Emirate of Sharjah and the surrounding region, in dialogue with the international arts community. Under the leadership of founder Hoor Al Qasimi, a curator and artist, the Foundation advances an experimental and wide-ranging programmatic model that supports the production and presentation of contemporary art, preserves and celebrates the distinct culture of the region and encourages a shared understanding of the transformational role of art. The Foundation’s core initiatives include the long-running Sharjah Biennial, featuring contemporary artists from around the world; the annual March Meeting, a convening of international arts professionals and artists; grants and residencies for artists, curators and cultural producers; ambitious and experimental commissions; and a range of travelling exhibitions and scholarly publications.

Established in 2009 to expand programmes beyond the Sharjah Biennial, which launched in 1993, the Foundation is a critical resource for artists and cultural organisations in the Gulf and a conduit for local, regional and international developments in contemporary art. The Foundation’s deep commitment to developing and sustaining the cultural life and heritage of Sharjah is reflected through year-round exhibitions, performances, screenings and educational programmes in the city of Sharjah and across the Emirate, often hosted in historic buildings that have been repurposed as cultural and community centres. A growing collection reflects the Foundation’s support of contemporary artists in the realisation of new work and its recognition of the contributions made by pioneering modern artists from the region and around the world. Sharjah Art Foundation is a legally independent public body established by Emiri Decree and supported by government funding, grants from national and international nonprofits and cultural organisations, corporate sponsors and individual patrons. All exhibitions and events are free and open to the public.

Sharjah is the third largest of the seven United Arab Emirates, and the only one bridging the Arabian Gulf and the Gulf of Oman. Reflecting the deep commitment to the arts, architectural preservation and cultural education embraced by its ruler, Sheikh Dr Sultan bin Mohammad Al Qasimi, Sharjah is home to more than 20 museums and has long been known as the cultural hub of the United Arab Emirates. It was named UNESCO's Arab Capital of Culture for 1998 and the UNESCO World Book Capital for 2019.