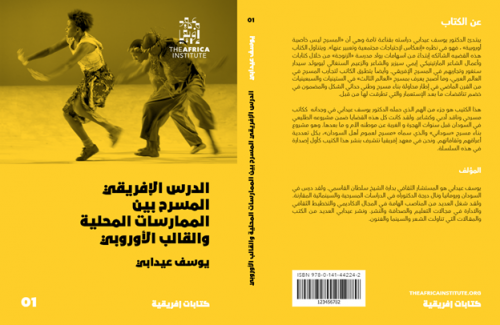 The Africa Institute in Sharjah, United Arab Emirates, presents new publications, including Beyond the Door of No Return: Confronting Hidden Colonial Histories through Contemporary Art, which marks the first in a series of co-publications by the Institute and leading publishing firm Skira; Ahmed Morsi: A Dialogic Imagination, part of the series of monographs on artists developed in collaboration with Sharjah Art Foundation; and At Home in the World. A Memoir, by renowned artist, writer, and teacher Ibrahim El-Salahi, all published this fall and winter. These follow the launch earlier this year of Writing Africa, a new book series published by the Institute that features topics in the humanities and social sciences relating to African and African Diaspora studies. These new publications build on the Institute’s mission to develop and publish new scholarship and to raise public awareness of the diversity, complexities, and histories of African societies in relation to their past, present, and future.

As the first in the series of co-publications by the Institute and Skira, and authored by Selene Wendt, Beyond the Door of No Return is a richly illustrated volume that recenters contemporary art away from Eurocentric perspectives and focuses on lesser-known details of colonial history and impacts, with an emphasis on stories of resistance and rebellion against colonial rule. Drawing on extensive research that brings together cultural studies and postcolonial theory, the book explores these issues through works from African and African diaspora artists, including John Akomfrah, Sasha Huber, Grada Kilomba, and Suchitra Mattai, among others.

Also recently co-published by The Africa Institute and Skira is At Home in the World. A Memoir on renowned artist, writer, and teacher Ibrahim El-Salahi. El-Salahi's practice combined and challenged Islamic, African, and western paradigms of modernism in visual arts. This memoir illustrates his travels, experiences, and memories of conversations with artworks and artists from across the world. From African American modernists like Jacob Lawrence and Hale Woodruff, to the leader of the Nation of Islam Elijah Muhammad and the Mexican painter Rufino Tamayo. The introduction is written by The Africa Institute Director Salah M. Hassan, contextualizing El-Salahi's work within the global history of modern art.

Published regionally in fall 2021 and available internationally in spring 2022, Ahmed Morsi: A Dialogic Imagination, the first artist monograph co-developed by the Institute with Sharjah Art Foundation, examines the places, people, texts, ideas, and materials that shape the unique practice of the Egyptian and New York-based artist Ahmed Morsi. It pays special attention to the interplay between Morsi’s poetry and paintings, by presenting scholarly essays on how real events and places are played out in Morsi’s own creation of mythologies and lyrics. Spanning his entire career, it brings together newly commissioned essays in addition to archival materials, selections from the artist’s own writings and the writing of his contemporaries (newly translated for this occasion), annotations of his diverse bodies of works and mediums, a chronicle of his artistic journey as well as a bilingual artist archive. Beginning with Morsi’s coming of age in the 1940s “Alexandria School,” a free thinkers and artists-led movement during Alexandria’s emergence as a post-war Mediterranean cultural entrepôt, to his move to Cairo in the 1960s and early 1970s where his Galerie ‘68 magazine became the voice of the avant-garde, and where he experimented with theatrical set and stage design. It also highlights his years in Baghdad where he delved into the city’s vibrant literary renaissance of the 1960s as an art critic and educator, to his experimentation with mediums such as printmaking and photography in New York, to which he relocated in the 1970s, and where he continues to live and practice.

The Institute is also publishing for Writing Africa, an ongoing new series that explores African and African Diaspora studies, with each edition using a single creative medium as a lens for understanding the rich and varied range of African cultures and history. Edited by The Africa Institute, the publications feature leading scholars on topics that span literature, visual culture, theater, and music, among other forms of creative expression. The first set of Arabic-language issues published include: The African Lesson: Theatre Between Local Practices and European Form by Sudanese playwright and critic Dr. Yousif Aydabi, advancing his investigations that "theatre is not a European particularity,” and exploring experiments in African and Arab theater (publication date: January 2021), and Background and Approaches to The Problematics of Identity in The Project of Sudanese Modern Poetry by Sudanese poet and human rights advocate Kamal Elgizouli, providing a history of modern and contemporary Sudanese poetry (publication date: January 2021).

“The Africa Institute is committed to broadening scholarship and public understanding of connections between Africa and the Gulf, and launching these series will enable us to extend our work with African and African Diaspora scholars, students, and the public worldwide,” stated Salah M. Hassan, director of The Africa Institute. “It is an honor to collaborate with Skira, one of the leading publishers in the field of art and visual culture, and we are gratified to embark on a new publishing partnership with our colleagues at Sharjah Art Foundation as well. These collaborations mark the beginning of a robust Africa Institute publications program that will encompass partnerships with prominent publishing houses around the globe as well as independent Africa Institute publications, together advancing understanding of Africa and the Gulf.”

For more information about the Institute’s publications, please visit: theafricainstitute.org.

About The Africa Institute

Established in 2018, The Africa Institute in Sharjah, UAE, is an interdisciplinary academic research institute dedicated to the study, research, and documentation of Africa and the African diaspora. As the only institution of its kind located in the Gulf—the historical nexus of African-Arab cultural exchange—The Africa Institute is uniquely positioned to expand understanding of African and African diaspora studies as a global enterprise. The Africa Institute’s curriculum of postgraduate studies is designed to train the next generation of critical thinkers in African and African diaspora studies, and through its program of international symposia and conferences, visual art exhibitions and artist commissions, film and performance series, and community classes and outreach events, the Institute is expanding public understanding of Arab and African exchange within not only the scholarly community but also the local Sharjah community, the region, and around the globe.