The Apollo Fall 2021 Programming “The Renaissance is Now!”

Highlights include a preview of Apollo New Works productions, a virtual screening of Devil’s Pie: D’Angelo, and the return of the annual Kwanzaa Celebration featuring Abdel Salaam’s Forces of Nature Dance Theatre, Additional events at the Apollo include 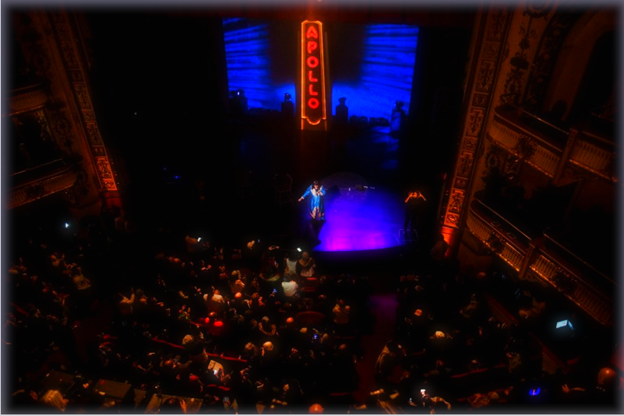 The Apollo today announced details of its fall 2021 season, taking place in-person at the Apollo and online on the Apollo’s Digital Stage. The season features a broad range of free and ticketed events and programs, paying tribute to the Apollo’s legendary community of artists and highlighting new works and commissions. Highlights include in-person auditions for Amateur Night at the Apollo in October ahead of the long-anticipated February 16, 2022 return of the original, legendary talent show; a preview of upcoming projects from an array of Apollo New Works artists; an Apollo Film Presents: ImageNation Cocktails & Sol Cinema virtual screening of the rarely seen documentary Devil’s Pie: D’Angelo about the singer’s rise to stardom, sudden disappearance, and return to music; the beloved Kwanzaa Celebration: Regeneration Night featuring Abdel Salaam’s Forces of Nature Dance Theater returns to the Digital Stage, and more.

The Apollo will also host comedian, musician, and actor Jamie Foxx discussing his first-ever memoir, “Act Like You Got Some Sense,” presented by Live Nation; Amanda Seales’ “Smart Funny and Black Live!,” as part of the 2021 NY Comedy Festival; and Shoshana Bean’s holiday concert, Sing Your Hallelujah, presented by For The Record. The Apollo officially re-opened to live audiences this August with a special concert, presented by Mastercard, featuring Grammy Award winner Jennifer Hudson. This fall, the Apollo will be the home for SiriusXM and Pandora’s Small Stage Series show in New York City with Grammy Award-winning band Coldplay performing on the world-famous Apollo stage for the first time on Thursday, September 23.

The Apollo’s season theme, “The Renaissance is Now!,” and its presentations expand the nonprofit theater’s role as a partner, commissioner, and co-producer of programming that centers Black artists and voices from the African Diaspora, while tackling important social issues for Harlem, New York, and the nation.

“As we enter our 88th season, the Apollo remains steadfast in its commitment to serve our community, audiences, and artists. While we continue to navigate the evolving challenges affecting so many around the globe, our upcoming season serves as a reminder that the Apollo has long been a beacon of Black creativity and a place of resiliency, joy, and artistry in Harlem,” said Apollo Theater President and CEO Jonelle Procope. “Providing a safe space for our community to freely express themselves is paramount to all that we do, and I’m thrilled that we are able to share an exciting season of programs that will unite and uplift us.”

Looking ahead to the spring, in addition to Amateur Night, the Apollo will welcome back audiences to its late-night offerings, the Apollo Music Café, the Apollo’s platform for emerging musical artists, and Apollo Comedy Club, celebrating the theater’s rich comedic roots. On May 7, 2022, the Apollo will also offer The Gathering: A Collective Sonic Ring Shout, a sonic quest rooted in the African and African American ritual of the Ring Shout. Woven together through a diverse array of multidisciplinary artists featuring new musical works for orchestra and choir, The Gathering is co-presented with the American Composers Orchestra and co-curated with National Black Theatre and will feature orchestral commissions by Herb Alpert Award winner Toshi Reagon, Tony Award winner Jason Michael Webb, and Lelund Thompson. Additional programs for the spring will be announced at a later date.

“The Apollo has long been at the intersection of artistry and activism, and this upcoming season pays special tribute to our incredible community of artists with timely presentations that honor our past, examine our present, and look ahead to our bold future as we create a new canon of American art and culture,” said Apollo Theater Executive Producer Kamilah Forbes “From the inspiring new projects by our Apollo New Works artists to the return of the annual Kwanzaa Celebration and Apollo education events that serve students across the city, we look forward to discussions and collaborations that will happen both at the Apollo and in the community at large as we both open our doors and continue digital presentations in this time of renewal and renaissance.”

Throughout the fall, the Apollo will collaborate with a number of producing partners to bring special events to the Apollo stage. On Saturday, October 16, comedian, musician, and actor Jamie Foxx brings his multi-city book tour to the Apollo to celebrate the release of his first memoir, “Act Like You Got Some Sense” (Grand Central Publishing–on sale October 19). In this hilarious and heartfelt memoir, Foxx shares the story of being raised by his no-nonsense grandmother, the glamour and pitfalls of life in Hollywood, and the lessons he took from both worlds to raise his two daughters. The event, produced by Live Nation, will also feature special guests to be announced.

The NY Comedy Festival returns to the Apollo on Friday, November 12 with “Smart Funny and Black Live!”, created by comedian, actress, and producer, Amanda Seales (HBO’s “Insecure”). The evening brings audience’s favorite funny folks to the “Hall of Flava” to compete in a head-to-head battle of wits that tests their knowledge of Black history, Black culture, and the Black experience. After a night of games, flanked by a live band, the evening will end with one guest taking the crown and being inducted into the “Illustrious League of Master Blacksperts.”

On Monday, December 13, Broadway veteran and Billboard #1 recording artist Shoshana Bean returns to the Apollo live with Sing Your Hallelujah​, a concert capturing the spirit of connection, reflection, and joy. With fresh interpretations of holiday classics and appearances by special guests, this year’s concert, presented by For The Record, honors the nostalgia and comfort of tradition while embracing new reasons to sing.

Widely considered a cornerstone of Black culture, the Apollo continues to provide a home to artists. Apollo New Works, the theater’s first major commissioning initiative launched in 2020, will offer a digital preview with performances of new works and conversations about the creative process on Thursday, October 14 at 7:30pm EST on the Apollo Digital Stage. It will feature Kamau Ware of Black Gotham Experience, Keith Josef Adkins of New Black Fest, multimedia duo Chen Lo and Asante Amin of Soul Science Lab, and playwright, scholar, and director Talvin Wilks.

The Apollo brings back its innovative series Apollo Film Presents: ImageNation’s Cocktails & Sol Cinema on Thursday, November 4 at 7:00pm EST with a digital screening of the rarely seen Devil’s Pie: D’Angelo. Directed by Carine Bijlsma, the documentary traces the story of the soul singer’s return to the public eye after a 14-year absence and features D’Angelo, Questlove, Dave Chappelle, and Jesse Johnson. It will be followed by a conversation with Bijlsma and ImageNation Co-Founder Moikgantsi Kgama.

On Sunday, December 26 at 7:00 pm EST, the Apollo will celebrate its annual Kwanzaa celebration, Kwanzaa Celebration: Regeneration Night, featuring the renowned New York-based dance company Abdel Salaam’s Forces of Nature Dance Theatre and guest performances. Since 2006, the Apollo has presented this annual performance to celebrate Kwanzaa during the seven-day holiday. This year, Forces of Nature Dance Theatre will again co-produce a unique digital event of dance and music honoring the rich tradition of Kwanzaa.

A cultural anchor in Harlem and New York City, the Apollo continues its role as a catalyst for social engagement with community and education offerings. This fall, Teen Takeover 2021 returns to the Digital Stage on Friday, October 15 at 8:00pm EST. It will showcase the talent of the Apollo’s Fellowship Program as they explore the theme “What’s Next?”, highlighting the next evolution of Gen-Z creativity.

On Sunday, January 9, 2022, at 3:00pm EST onstage, the Apollo and WNYC will present the annual Rev. Dr. Martin Luther King Jr. Day celebration with a special edition of the Apollo’s Uptown Hall: MLK Celebration, in partnership with the March on Washington Film Festival. This year’s discussion focuses on the connection between activism, artistry and athletics, both past and present. Scholars, artists, and activists will examine how the struggle for social justice affected influencers from Nina Simone and Muhammad Ali to Beyoncé and Colin Kaepernick and how they, in turn, affected the struggle for social justice. This Uptown Hall will be recorded live at the Apollo and will be broadcast on public radio stations nationwide over the MLK Holiday Weekend.

The Apollo Fall 2021 Programming “The Renaissance is Now!”