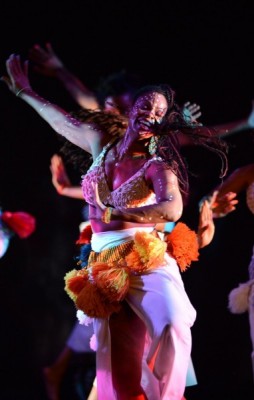 On Sunday, December 26 at 7:00 pm EST, the Apollo will celebrate its annual Kwanzaa celebration, Kwanzaa: A Regeneration Celebration, featuring a world premiere from renowned New York-based dance company Abdel Salaam’s Forces of Nature Dance Theatre and performances from Apollo New Work artists Soul Science Lab with Chen Lo and Asante Amin. For more than 15 years, the Apollo has presented an annual Kwanzaa festival performance during the seven-day celebration of African American culture. This year, Forces of Nature Dance Theatre will produce a unique digital event of dance and music honoring the seven principles of Kwanzaa, the Nguzo Saba. The event, hosted by award-winning radio host and annual Apollo Kwanzaa emcee Imhotep Gary Byrd, will be streamed on the Apollo Digital Stage. The program is pay what you wish and will be on demand through January 3.

“We’re thrilled to celebrate Kwanzaa virtually and provide a space to unite our Apollo community for a time of celebration and reflection,” said Apollo Theater Executive Producer Kamilah Forbes. “We look forward to premiering new work by the internationally acclaimed and award-winning Forces of Nature, bringing an invigorating and multi-generational experience of contemporary dance to our audiences.”

Bringing together dance, music, and poetry to honor the seven core principles of Kwanzaa through special performances, participants will reflect on the seven basic principles that focus on recommitting to the collective achievement of a better life for families, community, and Black people overall. The Kwanzaa Celebration will be anchored by Abdel R. Salaam’s Forces of Nature Dance Theatre, who blend contemporary modern, West African, house, and hip-hop dance styles, and will feature two works, the world premiere of “Spirit: Nguzo Saba” and “Earth Born,” both choreographed by company co-founder and artistic director Abdel R. Salaam.

Kwanzaa was created in 1966 by Dr. Maulana Karenga as a response to the commercialism of Christmas and a way to focus on building community. Kwanzaa is observed from December 26 to January 1, during which time participants reflect on seven basic principles—Umoja (unity), Kujichagulia (self-determination), Ujima (collective work and responsibility), Ujamaa (cooperative economics), Nia (purpose), Kuumba (creativity), and Imani (faith).

Since 2006, the Apollo has presented an annual event to celebrate this holiday tradition during Kwanzaa with families and communities from across New York’s five boroughs and the tri-state area. As it did in 2020, the Apollo will offer the event virtually, connecting African American communities across the country. Learn more at apollotheater.org.

Since introducing the first Amateur Night contests in 1934, the Apollo has served as a testing ground for new artists working across a variety of art forms and has ushered in the emergence of many new musical genres—including jazz, swing, bebop, R&B, gospel, blues, soul, and hip-hop. Among the countless legendary performers who launched their careers at the Apollo are Ella Fitzgerald, Sarah Vaughan, Billie Holiday, Gladys Knight, Luther Vandross, H.E.R., D’Angelo, Lauryn Hill, Machine Gun Kelly, and Miri Ben Ari; and the Apollo’s forward-looking artistic vision continues to build on this legacy. For more information about the Apollo, visit www.ApolloTheater.org.